One fleeting glimpse of a 50-year-old car makes apparent how generic today’s automobiles look by comparison. Like schools of anonymous silver fish, most modern marques swarm the freeways indistinguishable from one another. This stifling sameness has anyone with an appreciation for style wondering where individual expression has gone. As we lurch toward the era of autonomous shuttle pods, the experience of driving an old car—feeling the road and the machine from behind a wood-rimmed steering wheel—beckons with greater allure. For the cost of a new Prius, a curious car lover can dip his toes into the classic car pool and enjoy a precious level of vehicular engagement.

The urge usually begins innocuously, while reflecting upon the car that resonates most loudly with one’s past. It may be impossible to forget the first Ferrari or Firebird that permanently branded your teenage psyche. This personal journey is one to be savored, and one that begs for action. When pursuing the passion, the soundest advice is to buy what you love—just like art or real estate or bespoke timepieces. Old car values are as variable as the weather, with ups and downs that ride the wave of the stock market, international currency fluctuations and, for all we know, the alignment of the planets. The first part of the decade saw a meteoric rise in values for some marques and models, but over the past couple of years, a softening of the market has prevailed. Generally, “blue chip” cars continue to command top prices. But where tastes shift and markets adjust there is opportunity.

With the mantra “buy what you love” playing in a continuous loop, remember that cars are like fashion. Just 10 years ago, pre-war cars comprised about one-third of all auction lots. Today, they are virtually absent, except for the most desirable names like Bugatti, Duesenberg, Mercedes and other rare, high-value issues. Similarly, 1950s-era American iron like Ford T-Birds, Chevy Bel Airs and Cadillac Eldorados (once a mainstay of collector stables) are yesterday’s news. Cars appeal to the generations that grew up with them. Therefore, 70s and 80s-era models (Porsches, Firebirds and DeLoreans) have a following unimaginable until recently.

Keep in mind that certain cars will always be classics. Ferraris have and will continue to be the “gold standard,” and some Lamborghinis and Maseratis are rising with the Italian tide. Old Jaguars, Aston Martins and Bentleys have their followings. Porsches are the current “flavor-of-the-month” and have been on a rocket ride for the last few years. A Jaguar E-Type will always command more attention (and money) than an MG or Triumph, and a Ferrari Dino more than the Alfa Romeo that starred in The Graduate. But remember too that the MG or Alfa will likely provide as much driving pleasure, with fewer worries, than their more exotic stablemates.

Over their lifetimes, some old cars have delivered exceptional return on investment. A Cobra Daytona coupe that once sold for as little as $7,000 in the 60s and early 70s is worth nine figures today. But everyone in any hobby hates speculators. They drive up prices and push enthusiasts out of the game. Bubbles can expand and burst. Though it is folly to buy on the crest of a wave, one must also bear in mind that so-called “bargain cars” are bargains because no one really wants them. Tip: generally speaking, cars with only one row of seats are worth more than those with two, and (with a few exceptions) two doors are worth a lot more than four. 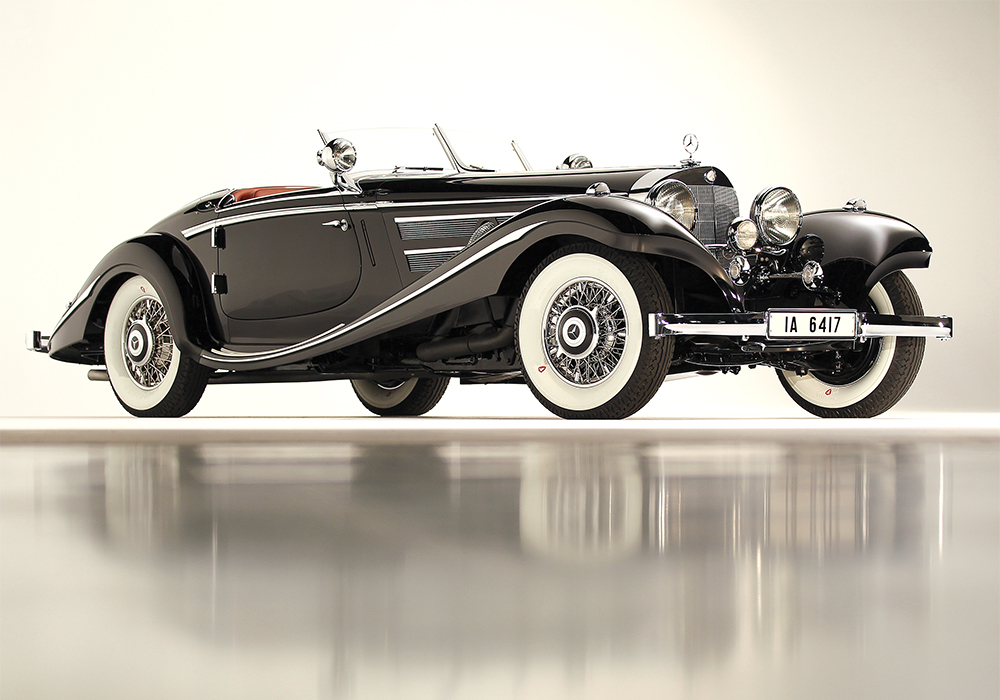 The 1936 Mercedes-Benz 540K Special Roadster is a marque that never loses value.

Devotion to a classic is not just about the initial buy-in, it’s about the cost and practicality of continued maintenance and upkeep. Like those adorable pot-bellied pigs, an exotic car’s needs could increase with age. Sometimes the responsibility and cost aren’t worth the hassle, one should decide just how much time and money can practically be invested in a car that may be driven only occasionally. Buy the absolute best example within budget. While a car requiring some mechanical work might be a contender, run, don’t walk, away from a car with body issues like rust, panel or frame damage.

In most cases, matching numbers—where a VIN (vehicle identification number) and serial number stamped into the engine block indicate that the original engine is still in the car—can affect values as much as 50 percent. Number-matching cars will always be in demand, but beware of fakes. For buyers who don’t care about maximum resale value and just want to drive, a non-original-engine car may present a real value opportunity.

Concours cars, like blue-ribbon pure-breeds, are finicky, fragile and not good for much of anything other than parking on a show lawn. A perfectly restored car can’t practically be taken on the road for fear of rock chips or even the accumulation of dirt that will require days of detailing. Don’t undertake a restoration unless you have at least $100,000 to spare, and at least a year’s worth of patience and Maalox. Any full-tilt restoration is an exercise in painful obsession. Where’s the fun in that? The dream of paying for the (seller’s cost) of the restoration and getting the car for free. A solid, good-looking “regional or club-level show winner” means a #2 car that looks great from five feet away, that while it might not withstand the microscopic scrutiny of concours judges, will free its owner from perfectionist worries. 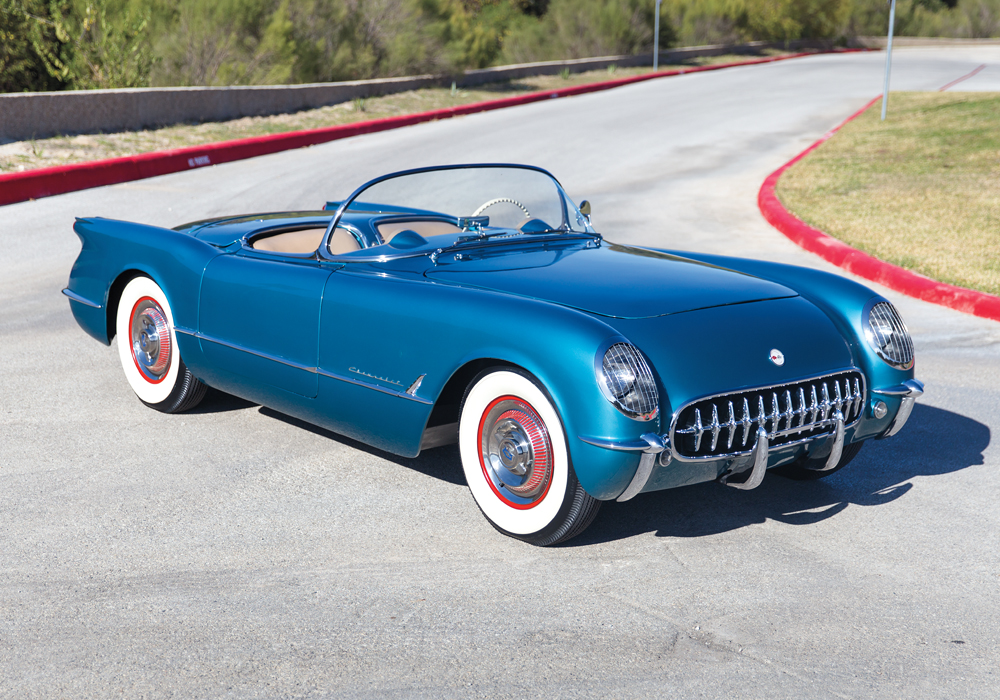 Futuristic and powerful, the 1954 Corvette is America’s sports car.

For many owners of old cars, waxing the paint is cheaper than a shrink and affords the same opportunity for reflective contemplation. And if its owner is mechanically inclined, a classic can be a source of challenging recreation. Otherwise, find a mechanic experienced in old cars—preferably the specified model. Be sure that parts and maintenance aren’t so prohibitive that you ignore attending to the vehicle’s needs. Here’s where domestic cars have a leg up on anything from Europe. Practically speaking, an American V-8 engine can perform as well or better than any Italian V-12. A rebuild on the former can be accomplished for under $5,000 and within days. The latter can cost well over 10 times as much and take 10 times as long. Tread with care when Lamborghini Countach or Ferrari Testarossa fantasies keep you up at night. 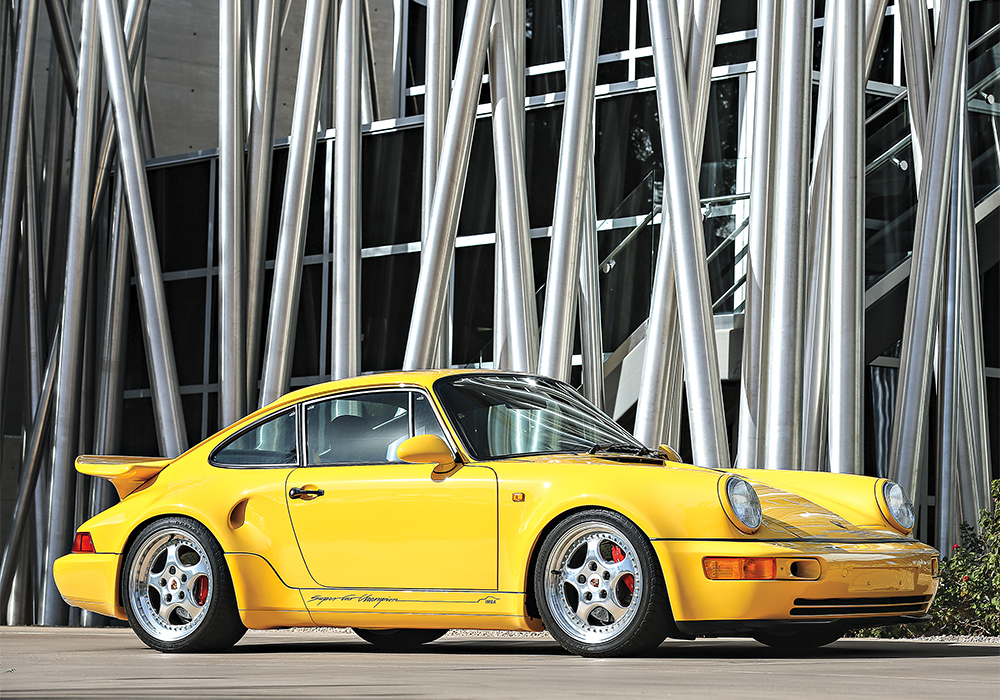 Porsche is the most in demand name on the market. The 1993 964 Turbo S Leichtbac recently sold for more than $1.5 million.

Research before buying anything larger than a 1:18-scale model. Car clubs are the best place to begin. Club members know and love their cars, and are usually in the hobby for fun and not profit. At least nose around club websites and make friends. You don’t have to stay friends, but it will provide a good gauge of the level of interaction needed to feed and water your dream—there are always cars for sale from members. Hemmings Motor News is an online classified ad mecca, the company publishes several authoritative magazines for enthusiasts. Other publications like Sports Car Market are invaluable as a source of current auction results in America and Europe. These experts know their stuff. They also publish an annual car value guide that provides an at-a-glance look at market prices and trends.

Other sources, in addition to private parties, are dealers and auction companies specializing in collector cars. Online venues like eBay can be a minefield, or a goldmine, depending on the care taken to negotiate the terrain. Never buy a car sight unseen and without having a mechanic familiar with the marque perform a thorough inspection and road test. Photos of cars are virtually worthless. They are often doctored and give no realistic sense of the condition of paint and trim. Advantages to buying from a private party or retail dealer are that time is on your side and split-second decisions—as at an auction—aren’t part of the equation.

On the other hand auctions are a tempting treasure chest of offerings, but it is nearly impossible to thoroughly inspect a car in advance of a sale and a buyer’s premium on top of the hammer price will add to the cost. Big names in the auction game are Barrett-Jackson, Russo and Steele, Gooding & Company, Mecum, RM/Sotheby’s and Bonhams. The most important sales happen in Scottsdale, Arizona, during January and in Monterey, California, every August. These sales set the tone—and price expectations—for market activity throughout the year. Attend an auction (the entertainment value alone is worth the price of admission), but stay away from the bar. Like Vegas, plentiful drinks lubricate the bidder paddles of would-be buyers not disciplined in the auction arts. Never buy under the influence. First-time buyers are probably better off sitting a few out or buying from a private party or a reputable dealer.

The 1987 Ferrari Testarossa revs fantasies, but costs a pretty penny to maintain its quality.

After buying, you’ll need to get it home. Transport companies like Plycon, headquartered in Kings Park and serving collectors nationwide, specialize in high-value new and classic car transport. They are equipped to move cars without incident. Never trust transport to any company not specializing in collector cars and insist on enclosed transport for any distance greater than a one-hour drive. Once it’s home, park it inside, under a cover and insure it. Collector car coverage is inexpensive and is based on limited mileage and agreed value. Companies like Hagerty are a good place to start. Their Hagerty Price Guide is worth consulting to take the pulse of market values.

Some old cars are simply better than others when it comes to being affordable, fun and reliable. While a Lamborghini Miura or Shelby Cobra represent solid gold investments, they can’t match other, more common cars in the fun-for-dollar ratio. This is our shortlist of a few makes and models capable of checking most of the boxes for a first-time buyer.*

*Figures based on the Hagerty Price Guide and Sports Car Market.