On August 7 of last year, just before 6pm, four men walked out of Jack’s Stir Brew coffee shop in Amagansett. They strolled across Main Street and entered an intimate, dive bar-esque music venue. They followed a corridor to a small, black stage where they met their instruments: a drum set, guitars, a bass and piano. They proceeded to serenade the 200-person crowd with some of their better-known songs: “Yellow,” “Fix You,” “Viva la Vida.” The men were Jonny Buckland, Guy Berryman, Will Champion and Chris Martin, known collectively as Coldplay. Audience members included Beyoncé and Jay-Z, Christie Brinkley and Jon Bon Jovi.

The events that transpired that evening may raise the eyebrows of the uninitiated. But those familiar with the iconic venue at 161 Main Street know it was just another night—and another legendary story—at The Stephen Talkhouse.

One night 30 years ago Peter Honerkamp got drunk. Imbibing alongside him was his friend Clifford Irving, author of The Bogus Biography of Howard Hughes. The two sat and drank as Honerkamp ruminated over his latest failed novel before proclaiming that he simply couldn’t write anymore. Irving responded with what would prove to be a life-altering question: Was there anything else you ever wanted to do? “I said, ‘I always wanted to own a bar,’” Honerkamp recalled. “He said, ‘Buy that bar.’ And that literally changed my life.”

“That bar” was The Stephen Talkhouse, a local watering hole that all the locals liked. It eschewed the glitz and glamour that drapes over the Hamptons in favor of a casual environment that welcomed people of all walks of life. “It’s not slumming it. It’s just casual,” Honerkamp remarked. He purchased it from its former quarreling owners without plans for a live music venue. Nevertheless, the music began, innocently enough. “Shortly after it started, a close friend of mine and a relative, Klyph Black, started playing on Thursday nights…and I had the idea that we could start doing live music. This was back when there were no live music venues out here.”

Honerkamp next invited his bluesman friend John Hammond to play. “The place was packed. It was a $10 cover. Then I started trying other musicians of larger stature…Taj Mahal was $20, Buddy Guy was $20 and people came. There were enough people that were willing to spend a higher ticket price to see them in an intimate venue and see them in a venue that was close to their home.”

In the early days, there was no secret to the venue’s run of big-name acts: “I had to pay them,” Honerkamp admitted. It was a huge role of the dice for a fledgling business. “For me and a tiny bar to pay someone like John Lee Hooker $3,500 was a risk and I lost on a lot of those shows.” 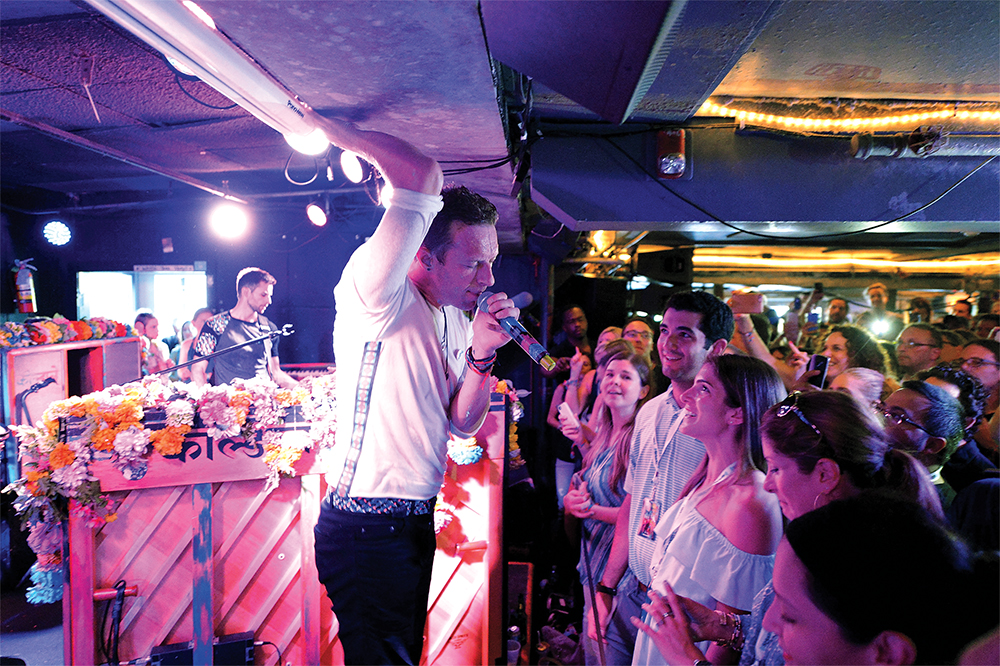 Chris Martin of Coldplay performs for SiriusXM in the Hamptons at The Stephen Talkhouse. (Photo by Kevin Mazur/Getty Images for SiriusXM)

Lost but persevered. With each credible act that graced the stage, the concept of the Talkhouse proved more viable. “We’re the smallest venue in the world doing what we’re doing,” Honerkamp stated. “At that time, we didn’t have the same credibility that we now have. The longer we were in it, people said, ‘Oh, he’s had this act, he’s had that act.’ Once you establish that it could be done, it got easier.”

This has equated to a who’s who of rock royalty making their way to Amagansett: The Rolling Stones, Paul Simon, Paul McCartney, Van Morrison, Billy Joel, Patti Smith, The Police. Some show up for concerts, some show up unannounced, others, like Jimmy Buffett—who according to Honerkamp, “has done more for the club than any musician”—become regulars.

Truth be told, hall of famers don’t walk through the doors every night, not even most nights. Yet the venue has thrived for 30 years. The secret is that the Talkhouse is the antithesis of all things modern-day Hamptons, a remedy to the socio-economic barriers determined by where you come from, who you know, what you look like and how much money you have to spend. Squeezed between a hardware store and clothing boutique, the Talkhouse isn’t trying to impress anyone. “It’s not a bar with people who were born on third base and think they hit a triple,” Honerkamp said. “Everyone’s equal. It’s very egalitarian…everyone can feel comfortable. I used to say, a single woman or a gay man could walk in this bar and feel just fine.”

This open-arm approach has created a synergy between business and community. The Talkhouse is woven into the fabric of the neighborhood and makes a priority of giving back to its supporters.

“We’ve done an amazing amount of charity work,” Honerkamp said. “It enriches my life. It enriches everyone’s life. It’s good for the bar. It’s good for the people. If you have the opportunity to do it, it’s much easier to give than receive…We want to be part of this community and that community keeps us alive, we get it right back.”

The reciprocity of the Talkhouse’s community focus was in the spotlight last summer when those four men played that semi-secret show. The concert was sponsored by Sirius XM Radio, whose president, Scott Greenstein, is an Amagansett resident. Greenstein knew just the place to have Coldplay perform an intimate show for subscribers. “They wanted to do something cool and have Coldplay in a smaller environment…it became a cool thing for them, a cool thing for the subscribers and a really cool thing for us.”

The venue’s storied past informs its future. The Stephen Talkhouse is very much as it was three decades ago, a telltale sign that the building transcends a physical space. “It’s not a place for sale. It’s an idea and if I could see it going this way for the rest of my life and beyond, I’d be thrilled. The thing about the Talkhouse is that it doesn’t change. You go in there, people know your name, it’s the same feel and you don’t have to be anyone.”