Art isn’t always pretty, and pretty isn’t always art. The essential element is communication, and more than anything, artists seek to convey truth. Sometimes it’s the simple realities of quotidian existence: a bowl of fruit, the view from a window, a lover’s form. Other times, as in Taryn Simon’s photographic series The Innocents—on exhibit at Guild Hall this month—it’s complex, layered and a matter of life or death.

Simon, an East End resident whose work has been exhibited worldwide and collected by the Metropolitan Museum, Tate Modern and the Guggenheim, takes photographs that are as much about concepts, processes and practices as they are about imagery. She constructs visuals that emit messages about and how messages are communicated, altered, lost or obfuscated, sometimes intentionally.

Though it’s said that pictures don’t lie, it would take Simon very little time to disprove that. She’s challenged that notion over and over in her work, but never more powerfully than in The Innocents. From 2000-2002, working with the Innocence Project, an organization dedicated to freeing the wrongly convicted, Simon crossed the country photographing men and women who had been imprisoned for crimes in which DNA evidence later exonerated them. In her artist’s statement, she noted, “In each case, photography offered the criminal justice system a tool that transformed innocent citizens into criminals, assisted officers in obtaining erroneous eyewitness identifications and aided prosecutors in securing convictions…

Nowhere are the material effects of ignoring a photograph’s context as profound as in the misidentification that leads to the imprisonment or execution of an innocent person.” 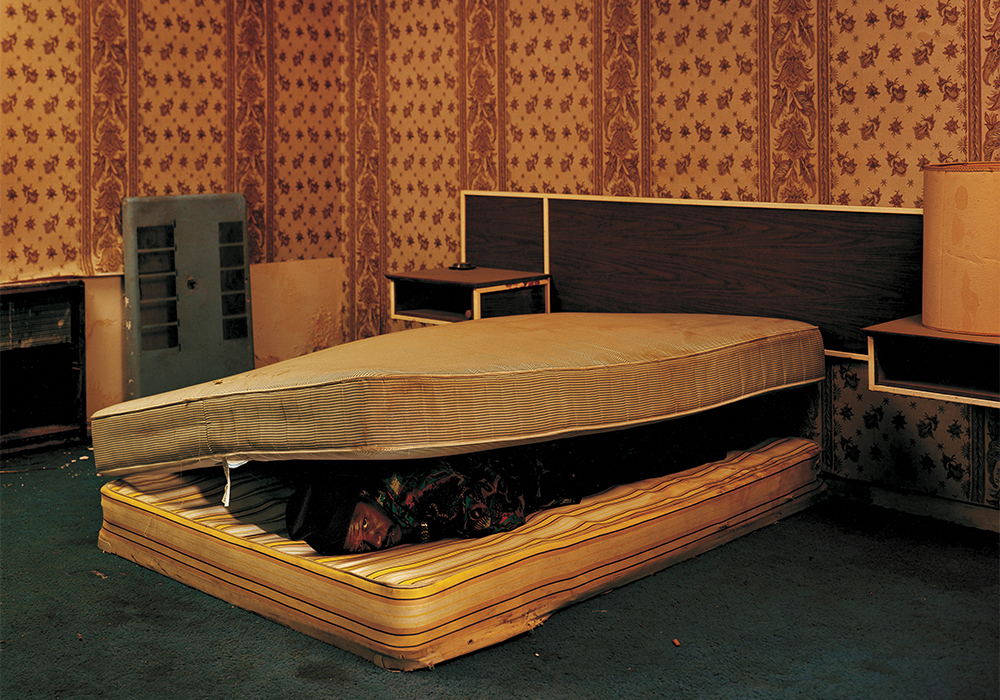 Larry Mayes at the scene of arrest, The Royal Inn, Gary, Indiana. Police found Mayes hiding beneath a mattress in this room. Served 18.5 years of an 80-year sentence for rape, robbery and unlawful deviate conduct.

“I had worked with Taryn in 2009 and I wanted to again,” Guild Hall’s museum director Christina Mossaides Strassfield explained. “We began to talk about The Innocents. It turned out that it was the 15th anniversary of this project and though I’d only seen them in the book form, I thought that it was such an amazing and moving experience.” She added, “We’re really in a strange time right now. I felt that this was a very timely subject.”

The exhibition comes at a time when not just artists but museums are becoming activists. From MoMA to LACMA, art institutions have been making strong statements in their exhibition choices. Strassfield admitted the move to show The Innocents reflects that trend. “Art should be meaningful and should be inspiring. And I feel that Taryn Simon’s work encompasses all those aspects.” But, she added, “In my own subtle way, there’s a bit of activism in these things.”

Fourteen photographs fill Guild Hall’s galleries. The individual images have each been artfully arranged by Simon. She posed the innocent subjects in places associated with the crimes—sites some had never set foot on, but that nevertheless had tremendous impact on their lives. The photographs are infused with unease and tension. Mostly shot in desolate areas, they’re harrowing and filled with foreboding and even malice. But whose?

Simon stated, “Photography’s ability to blur truth and fiction is one of its most compelling qualities. But when misused as part of a prosecutor’s arsenal, this ambiguity can have severe, even lethal consequences. Photographs in the criminal justice system, and elsewhere, can turn fiction into fact. As I got to know the men and women that I photographed, I saw that photography’s ambiguity, beautiful in one context, can be devastating in another.” 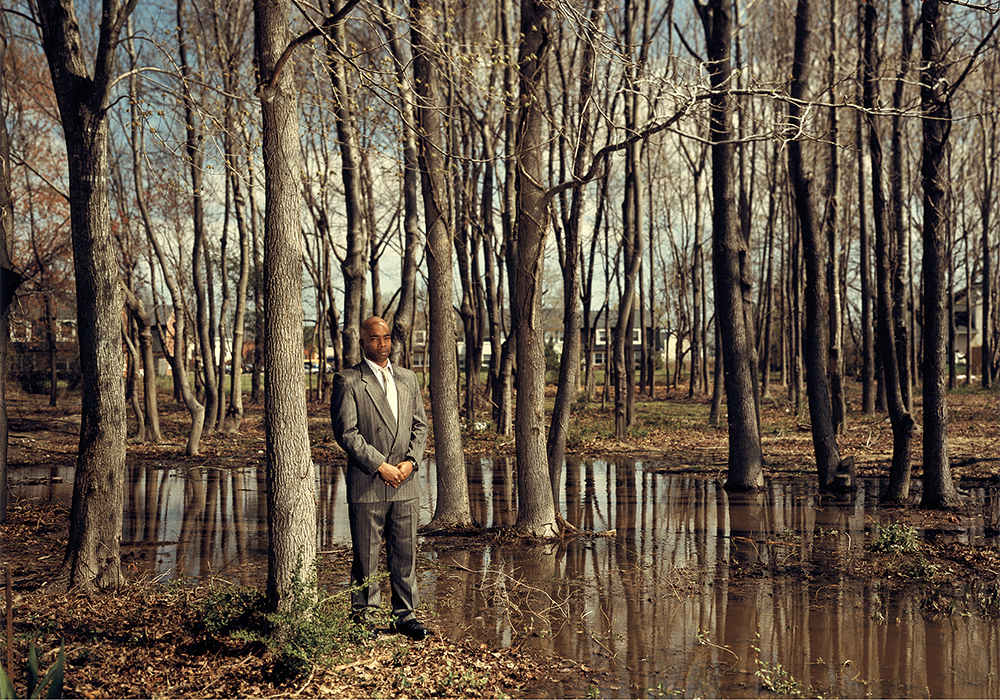 Troy Webb at the scene of the crime, The Pines, Virginia Beach, Virginia. Served 7 years of a 47-year sentence for rape, kidnapping and robbery.

Tim Durham was photographed at the scene of his alibi. Shot from above, against an abstracted landscape of grass and broken fragments of clay, Simon’s image highlights Durham’s distinctive red hair and a wrinkled brow of apprehension. He holds a gun that 11 witnesses testified he used at a skeet shooting competition he attended with his father in Dallas, Texas, on the date of the crime in Tulsa, Oklahoma, for which he was convicted.

“Because of their large scale it’s almost like you’re walking into the picture and living the experience with these people,” Strassfield noted. By the time advance DNA testing had exonerated him, Durham had served three-and-a-half years of a 3,220-year sentence. It turned out the crime was committed by a paroled sex offender with similar red hair who’d just moved to the neighborhood.

Strassfield pointed out two other photographs that express both stark similarities and differences. “The most dramatic portrait for me is the Larry Mayes portrait, the scene of the arrest between two mattresses. It’s just such a powerful image, the disheveled room, the mattresses on the floor…He served 18-and-a-half years of an 80 year sentence,” she said.

“Then, completely the opposite, there’s Jeffrey Pierce, which is a very serene image showing him on Lake Huron in Michigan. He served 15 years of a 65 year sentence…In one scene we have an African American man. In the other it looks like he’s Caucasian. We see the difference of locale, and yet they were both charged with extreme criminal acts. I feel they tell a story and you want to find out more.” 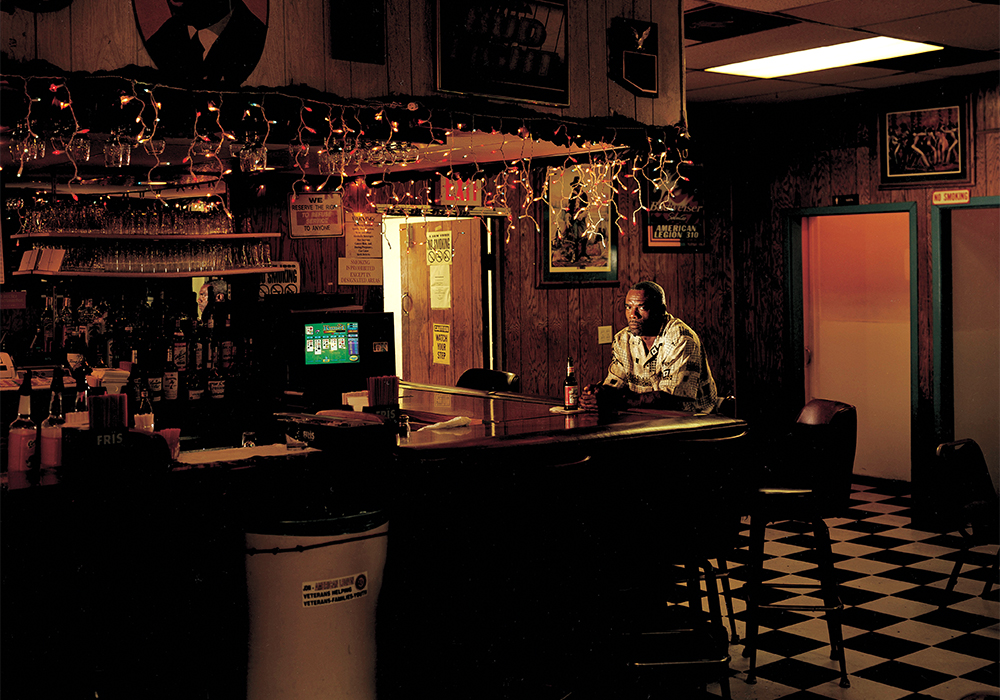 Frederick Daye Alibi at American Legion Post 310, San Diego, California, where 13 witnesses placed Daye at the time of the crime. Served 10 years of a life sentence for rape, kidnapping and vehicle theft.

The messages in The Innocents are forceful and jarring, but also subtle, leaving lingering traces in the mind. There’s heartbreak, violence and tragedy but also redemption and hope. The final image documents the story of Kenneth Waters, but Waters doesn’t appear in the photograph. After having served 18 years of a life sentence, he died from accidental causes six months after his release from prison for a murder he didn’t commit. An empty crime scene portrays his absence, the history completes the picture. Waters’ sister, Betty Anne, a high school dropout and divorced mother of two, returned to school and spent those 18 years working her way through college and then law school to obtain and present the DNA evidence that exonerated him.

Strassfield chose The Innocents for the museum’s busiest months, expecting some 15,000 visitors. Despite its challenging nature she said, “I don’t think it will be controversial. I think you’ll see that our justice system has a lot of different layers to it. I think it will bring some interesting dialogue, and that’s an important aspect of what we need today. I don’t think we need confrontation. I think we need constructive dialogue that’s well informed.”