“As Milton Glaser once said, ‘There are three responses to a piece of design: yes, no and wow!’ Wow is the one to aim for,” said celebrity landscape designer Vickie Cardaro of Buttercup Design Group on Shelter Island. This intangible “wow” is one Cardaro has intrinsically weaved into her designs for nearly two decades, attracting the eyes and interests of high-profile creative-types from across the East End.

Growing up in Cape Canaveral, the Association of Professional Landscape Designers’ 2015 International Design Award winner was not always a green-thumbed virtuoso. Cardaro’s career began in television and film, working as a producer and head of creative development. Though she was not necessarily eager to leave the entertainment industry or the bustle of New York City behind, Cardaro decided to try an experiment: retire to a Shelter Island beach house for one year, “to watch the seasons change.”

To spruce-up the property, she began by planting one hydrangea by the rear door of the home followed by some velvety primroses. Prior to this, Cardaro considered her relationship with nature akin to the famed Fran Lebowitz’s quote, “The great outdoors is the space between my front door and a cab.” But the power of these first plantings made a lasting impression, forever changing Cardaro’s philosophy on nature. “I was startled that I could so easily transform a rather grim landing into something cheery, simply by digging a hole and plopping a plant in,” she recalled. “Cut to 18 years later, I’m still here, still planting and nothing surprises me more.”

Cardaro got her first taste of professional landscaping in 1999. There was a need for a garden center on Shelter Island as the previous long-standing one had suddenly closed. Cardaro seized the opportunity to launch her own. “I had it only one season as I wasn’t keen on the retail aspect of being tethered to a store, but that morphed into a tiny little design/install business, which grew and grew.”

The self-taught designer educated herself by reading and learning about the plant life on the North and South Forks through site tours before ultimately founding Buttercup Design Group. “The amount of hard work and knowledge necessary for this field is staggering. From horticulture to soil science to stormwater management, drainage, irrigation, climatology, the fact that you deal in perishable inventory—let alone the design aspect. I didn’t study horticulture or landscape design at school, but was simply too ignorant to think I couldn’t do a 180 and be successful in landscape design. There’s a lot to be said for naiveté, if and only if you have an insane work ethic.” 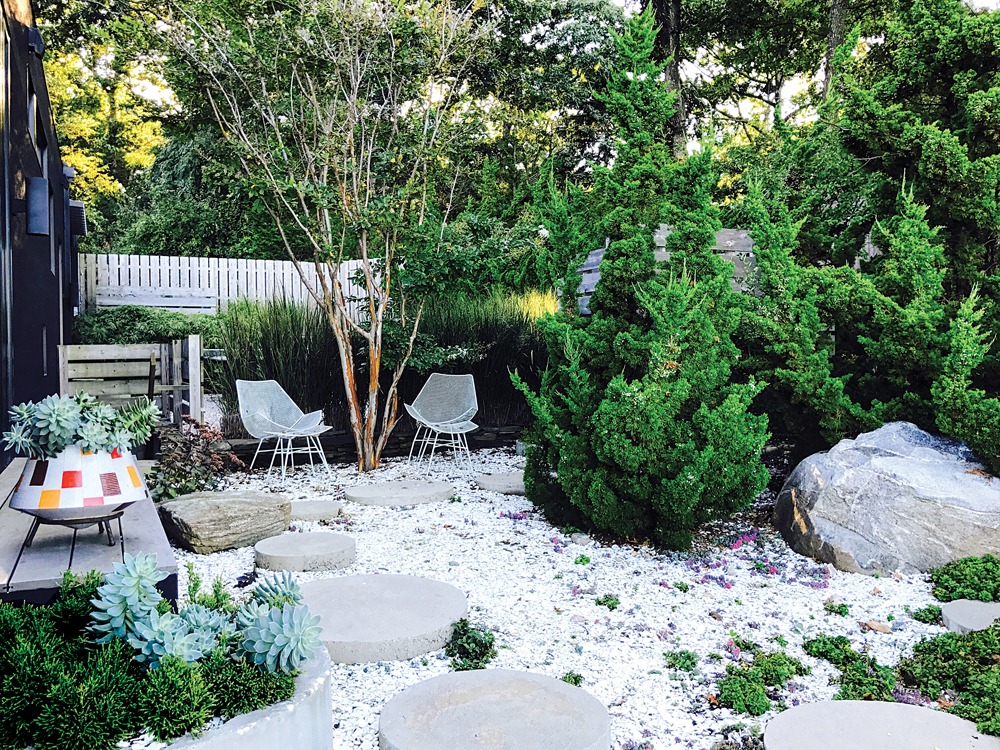 The circular stones create a path to the garden off the master bedroom.

Today, the reformed “devoted city rat” is a leader in sustainable design on the East End, specializing in creatively defending landscapes from deer through beautiful and out-of-the-box design. From the standpoint of aesthetics, Cardaro offers outdoor carpentry services for fences, pergolas and arbors, as well as masonry for elements like artisanal stonewalls and planting beds.

Over the years, Cardaro embraced the challenge of exploring different aesthetics while providing the means to actualize them within the confines of the ecological landscape. Her designs veer toward a clean, modern sensibility and Buttercup currently has a number of projects in various stages, several a few years in the making. Among them is a complex waterfront modernist with rainscreen siding and a Japanese-inspired courtyard garden with a slightly raised boardwalk made of reclaimed wood from the South Street Seaport that was destroyed after Superstorm Sandy. “So much can go wrong. We are, after all, in the business of basically selling nature and it’s sometimes a bit of a battle and, of course, she usually wins. It’s definitely the most challenging thing I’ve ever done. But I simply got better with more and more experience.”

Inspirations are derived from patterns in nature, film, art, architecture and especially travel. “Another inspiration is failure,” she added. “That’s where we learn how to make things work and to be better next time. There’s always a little ‘bad’ in order to get to ‘good.’” The initial jumping off point for Cardaro’s designs is the question of how the architecture of the home informs the location—and vice versa. The real challenge lies in the second step: shaping the blank canvas. “It involves massive amounts of daydreaming and procrastination. I used to get upset about this until I realized it was all part of the process. It suddenly all comes together and feels almost easy after all the tortuous doubt and unknowingness.” Her ultimate goal is a simple one: make the client happy by creating beautiful, transformative and responsible outdoor spaces. Her objectives and subsequent successes have garnered Cardaro a reputation as a designer to the designers. 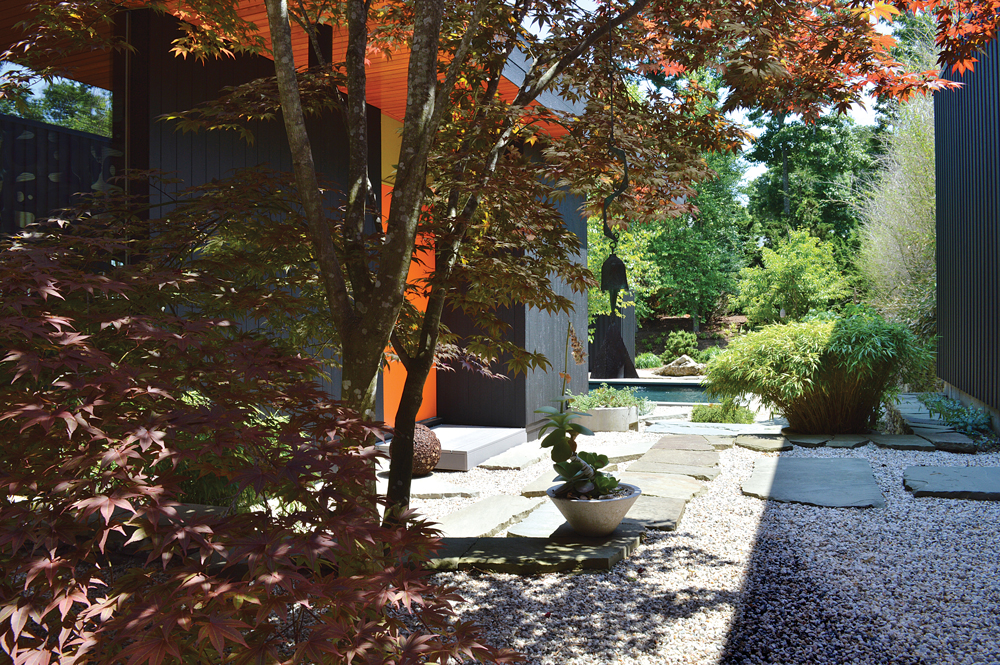 The entry courtyard is shaded by a red maple tree.

Interior decorator Jonathan Adler and Barneys New York creative ambassador-at-large Simon Doonan called upon Cardaro not once, but twice for their landscape renovations. Their first Shelter Island home came with outdoors that left much to be desired. “It was shockingly undone, with an air of neglect. They called it feral. Planting one blade of grass would have been an improvement in the mudflats that it was.” Cardaro drew inspiration from the home’s colorful interior to create a vibrant and unexpected outdoor space. She incorporated the couple’s need for privacy and love of succulents into a Vietnamese-inspired design with rarely seen hardy banana groves and bamboo that suited the surroundings on Shelter Island.

When they left that home in 2010, Cardaro was tasked with completely overhauling Adler and Doonan’s new beachfront estate. The couple built a new classic modernist style home from the ground up. “In the second house I was more restrained because they have an epic view of the water. In the other house I had to create the view, here you didn’t want to compete with a beautiful water view. In this case, [the landscape design] was much more naturalistic and restrained, just like the architecture.” The natural design also includes a host of salt-tolerant ornamental and dune grasses, cedars and black pines.

As for working with the two famed designers, “They’re atypical,” Cardaro explained. “I’ve worked with other designers who are much more involved in the process, more of a collaboration. I think Simon and Jonathan have enough going on in their own highly creative lives that they leave others to do their jobs…but the great thing is they look to you for your knowledge and experience and creativity.”