Ask any half-dozen family members and friends about their vision for an ideal day cruising around on the water and the answers will likely include a half-dozen different yachts. Some fantasize about wide sun loungers and an onboard hot tub. Others daydream of powerful engines revving through breathtaking speeds. Quite a few conjure visions of a big swim platform for watersports. Still others see sails and maybe even hear the soft jingle of rigging. This summer, all of that and more is available in new model yachts from some of the industry’s leading builders—vessels with features that will make every boater take notice.

Related Content: Where to Dock & Dine on Long Island 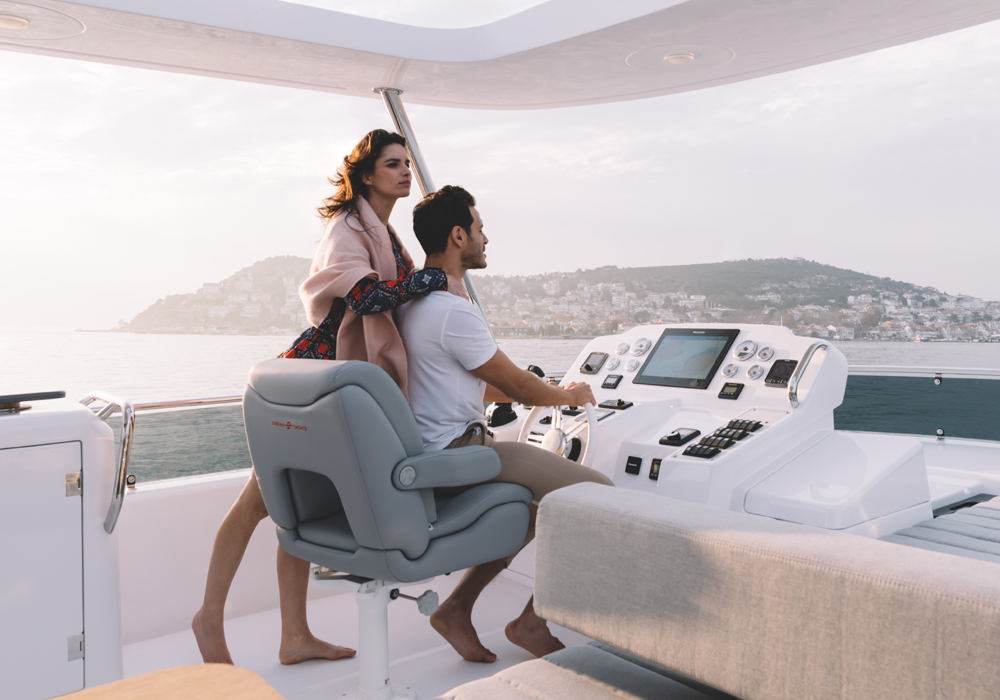 Sirena Yachts is a brand name that’s new to many enthusiasts. This recently launched line is from Turkey’s Sirena Marine, which has been building sailing yachts since 2006 and has worked in joint venture with Italian powerhouse builder Azimut-Benetti since 2008. The result: a mid-range yacht with mega yacht style. Earlier this year Sirena 64 and Sirena 56 premiered. The former was so well received that the builder sold four of them within two months—a noteworthy statistic by any aficionado’s high standards.

A handful of luminaries in the industry contributed to the Sirena 64’s creation, including Frers Naval Architecture & Engineering, long known for top-speed racing sailboats along with newer motoryacht designs. Taking a cue from eco-friendly propulsion systems typically reserved for larger models, the Sirena 64 is 20 percent more fuel efficient than her competitors at a cruising speed of 16 knots, according to the builder. Pulling the throttles back to 10 knots gives her a range of 1,000 nautical miles—plenty far for anyone who wants to explore the Bahamas or cruise the Intracoastal Waterway without having to make too many refueling stops. 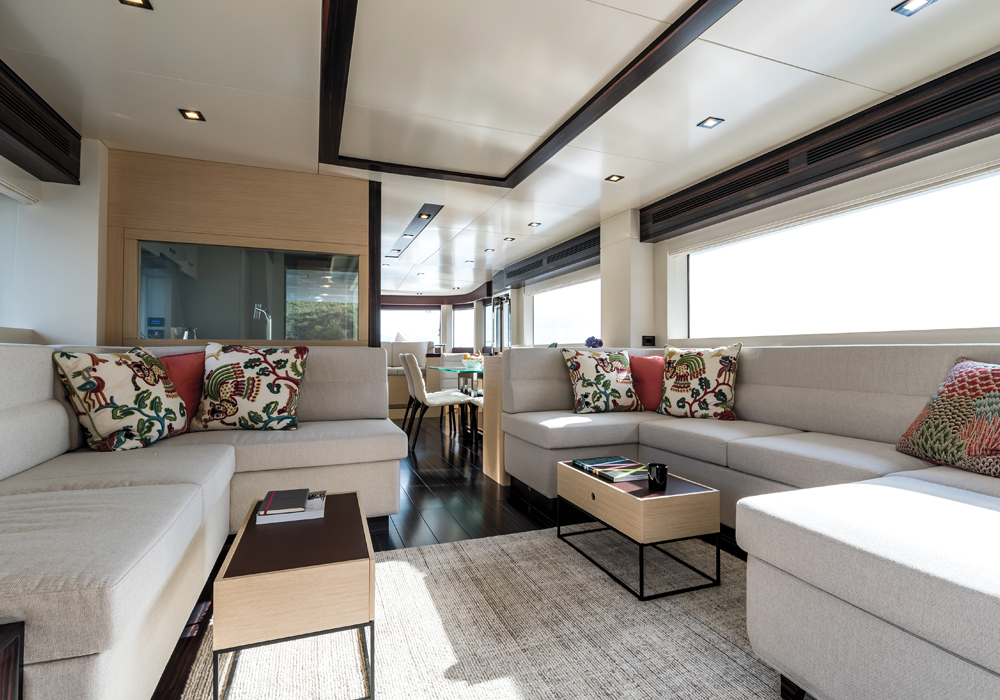 Large windows enhance the natural light in the cabin.

The captain will certainly enjoy these vital stats, but guests will revel in the luxe amenities. The Sirena 64 has the largest master stateroom in her class, according to its builder. Design Studio Spadolini in Italy oversaw the interior décor, earning the Sirena 64 major style points. Large windows enhance natural sunlight and dark wood floors make for an inviting living space befitting a Riviera getaway.

Outside, a 410-square-foot flybridge extends to create top-deck space along with a shaded cockpit for outdoor dining below. For an extra “wow factor” say yes to the optional hot tub that can be installed on the foredeck. 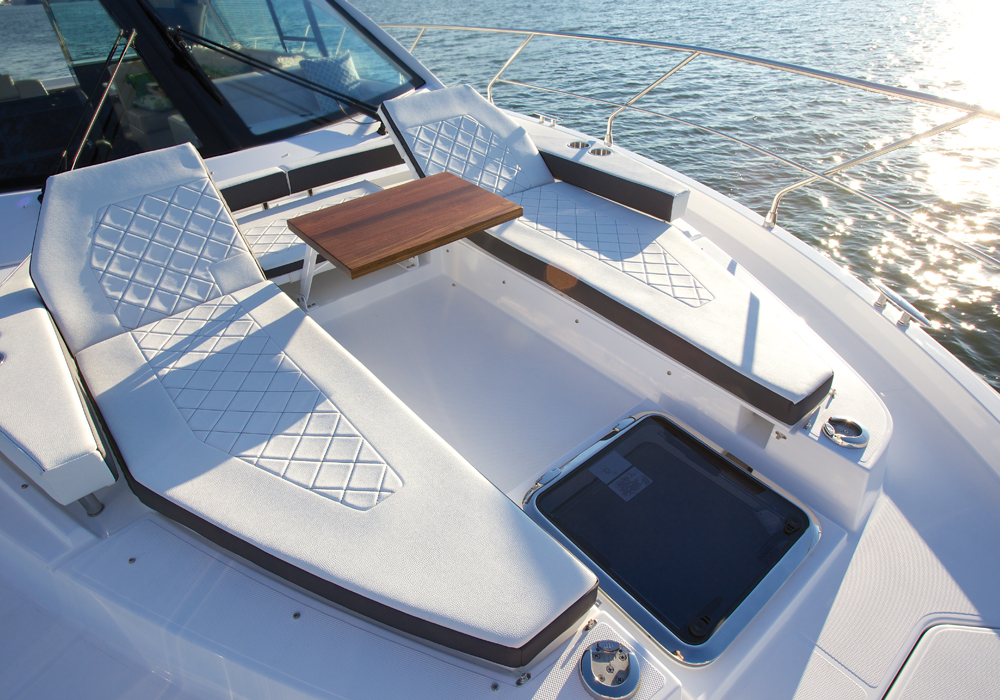 The Cantius’ two-seat bow lounge is a retreat for quiet conversation.

Cruisers Yachts turned a lot of heads in 2015 with the debut of its flagship 60 Cantius, a coupe with seating, dining and galley all on the main deck for easy living. One of the primary compliments the Wisconsin-based builder received was about roominess, not only with the overhead sunroof
open but also because of the comfortable 6-foot, 5-inch headroom in the salon.

And while plenty of boaters loved her features, some clients wanted the same styling in a smaller package. For 2017, the builder introduced the 50 Cantius to meet the demand.

Like her big sister, the 50 Cantius—with a length of 49 feet, 4 inches—is designed with a main-deck lifestyle in mind. Essentially, the layout creates an indoor/outdoor entertainment space. A u-shaped dinette and sofa provide seating for six to eight people and the wet bar and grill are located on the transom—freeing up space where they might otherwise be located in the cockpit. This also allows the chef to face guests while standing on the swim platform and grilling up freshly caught fish. Speaking of the swim platform, it makes a great spot for launching water toys such as kayaks and paddleboards. 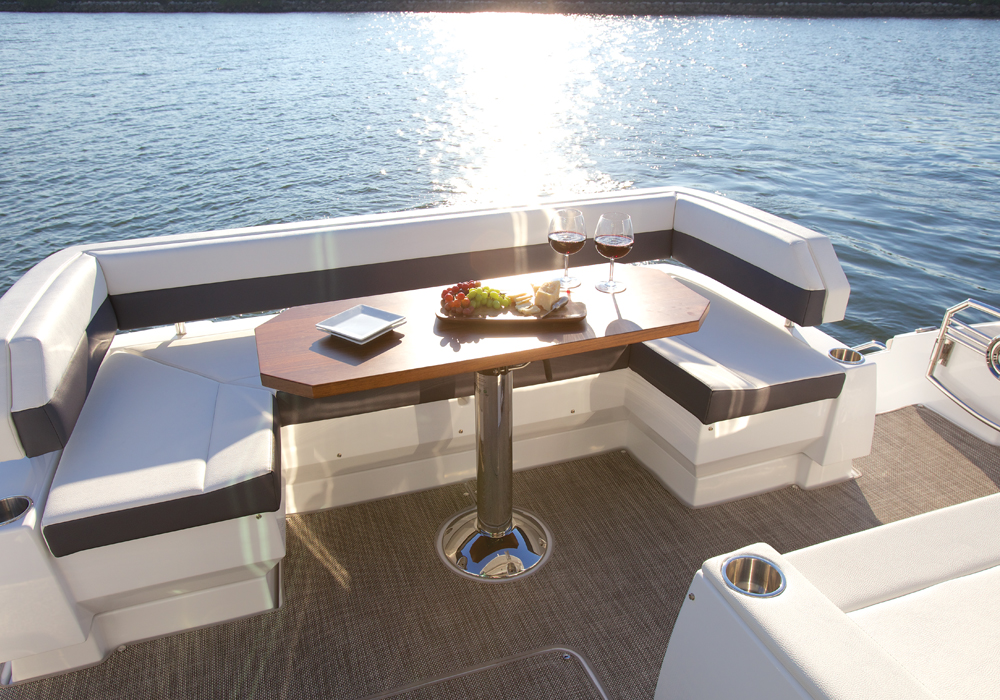 The large settee can be used as two pieces or rotated to become one entertainment area.

The stainless steel sliding glass doors open into a climate controlled galley and salon with an indoor dining area, all beneath an opening sunroof. Three staterooms are on the lower deck. The full-beam master is ideal for adults, with a VIP stateroom for guests. The third is outfitted with bunk beds.

Power is a pair of 435-horsepower Volvo Penta IPS600 engines, which come equipped with the latest propulsion technology on the water. Among the advanced electronics, the IPS system allows skippers to steer by joystick control, easing the learning curve for anyone taking command of a yacht for the first time. 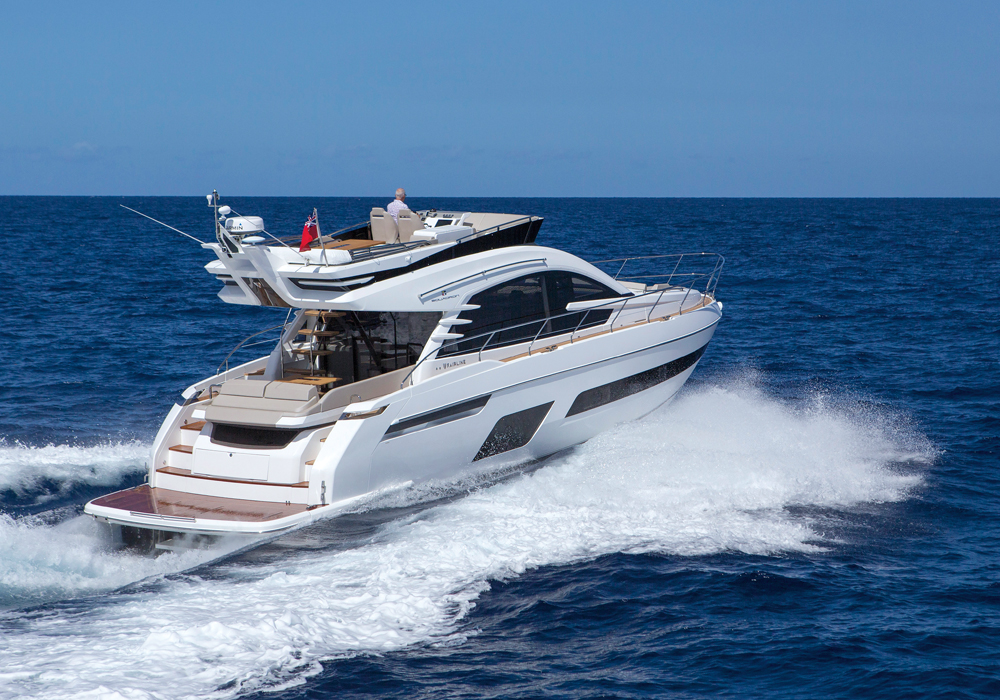 The fully customizable Fairline Squadron is more than a pretty face. Its three engine options ensure its passengers will get where they’re going—no matter the captain’s pace.

British builder Fairline Yachts offers two lines: Targa and Squadron. The primary design element that distinguishes the Squadron is its flybridge, giving boaters an upper-level outdoor helm and entertainment space. And the new Fairline Squadron 53 redefines the look of that level with an all-new exterior superstructure from Italian designer Alberto Mancini.

Beyond Fairline, whose Squadron maxes out with a 78-foot model, Mancini has worked for Overmarine, Magnum and Otam, whose yachts cross into supersize. That’s why the top level on the Fairline Squadron 53 now has larger-yacht styling. Seen in profile on the water, the Squadron 53 appears to be in flight. The boat is built on the same hull as Fairline’s Targa 53, but she looks decidedly fashion-forward.

Owners have choices when outfitting the Squadron 53. The flybridge can be ordered with two or three helm seats. With two, the extra space goes to a sunpad just starboard of the helm. On the main deck, the galley can be located forward and to port (next to the indoor helm station) or aft and to starboard (just a few steps from both the indoor and outdoor dining areas). 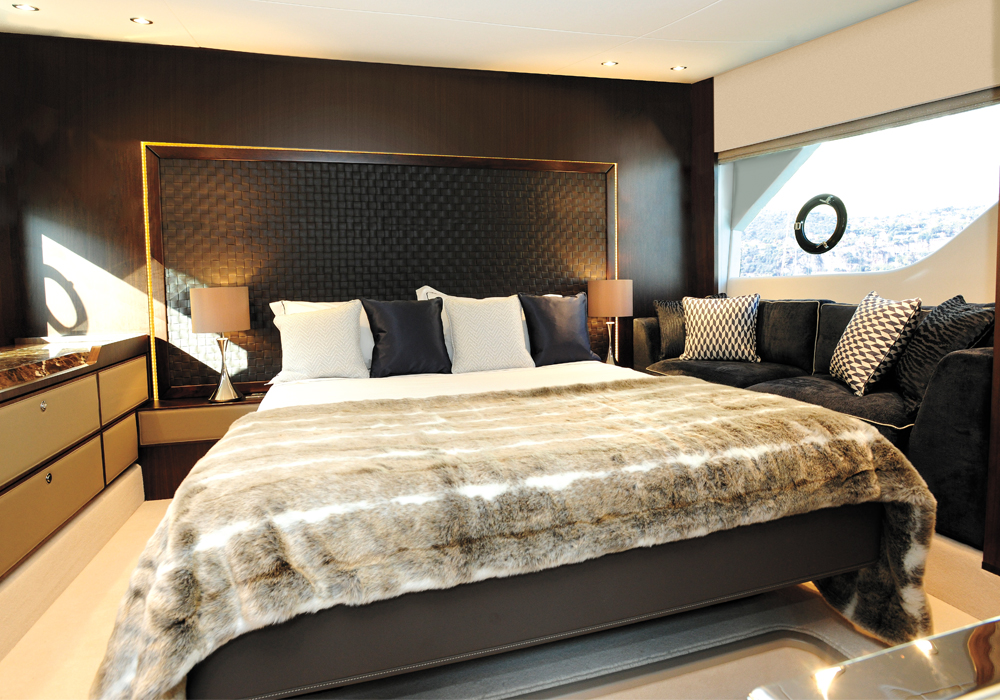 Fairline knows its buyers expect to make good time when cruising, thus there are three engine options for the Squadron 53. The twin 675-horsepower Volvo Penta D11 diesels push her to a top end of 30 knots, while the 725-horsepower D11 will have her hitting 32 knots. Installing twin 850-horsepower Caterpillar C12.9 diesels gives owners a 34-knot top cruising speed. 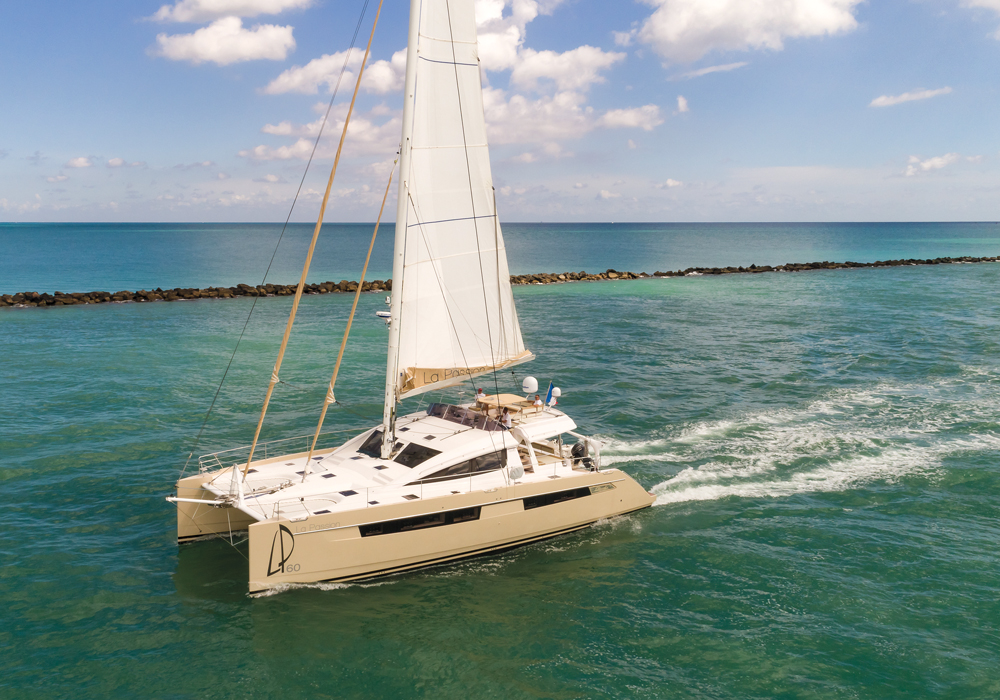 Watersports lovers, take note of the Serie 6. Her design allows for easy water access with snorkeling fins, kayaks and paddleboards.

Privilege Yachts, based in France, has long been known as one of the world’s premier builders of catamarans. The group offers models from 54 to 74 feet in length and boasts more than 600 yachts sailing the world’s waters today. The 64-foot Serie 6 model made her U.S. debut in February at Strictly Sail Miami to rave reviews.

The Privilege Serie 6 is designed by naval architect Marc Lombard, who gave the yacht sharper lines for lower running resistance and better performance at different speeds, more volume at her ends to reduce pitching motion and a raised section above the waterline for more structural rigidity in her hulls. 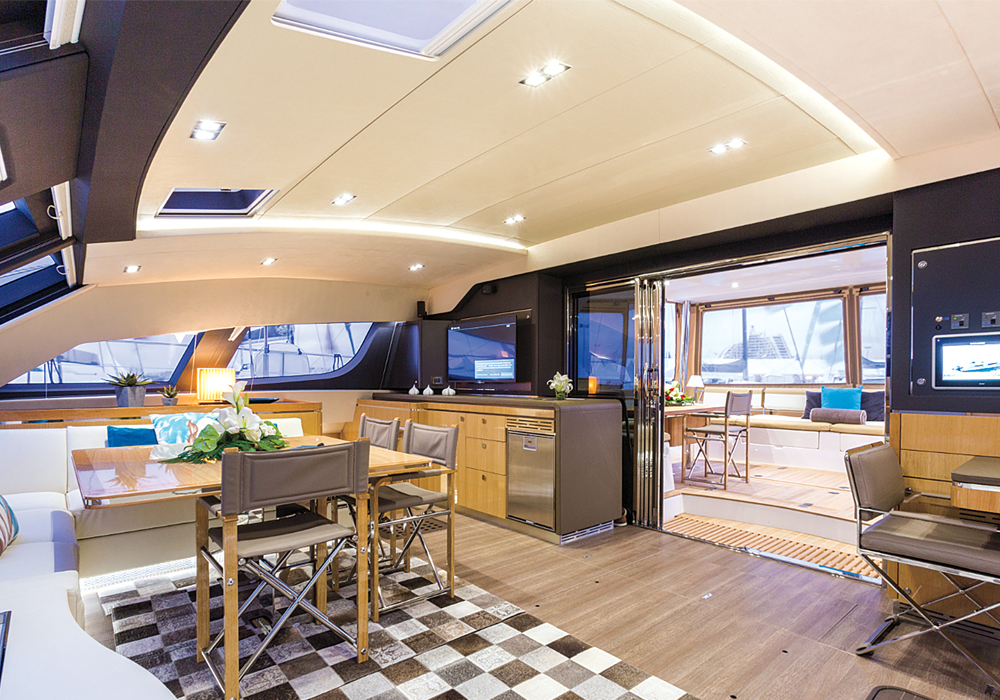 The 64-foot catamaran was designed by a naval architect.

Watersports lovers will want to look aft on the Serie 6. She has dual step-down transoms for easy water access with snorkeling fins, kayaks and paddleboards. Those transoms are joined by a slightly higher aft platform that can be used for tender stowage and for lounging at anchor. It’s a great spot to relax with an iced beverage while enjoying the water views.

Inside, the Serie 6 has a dining space for 10 and an interior navigation station in her salon, which is surrounded by windows that let in the natural light. Owners can choose interior décors in maple, oak, cherry or walnut. Each of the four guest staterooms has an en suite bathroom with separate shower. Additional below deck space can be allotted to wine refrigeration, extra produce stowage for long-distance cruising and other features tailored to the owner’s plans.

The master stateroom is on the main deck, with a forward window that looks out over the bows for panoramic views. The way the bed and windows are arranged in the master lets guests wake up and feel like they are floating above the water. Owners can customize the Serie 6 even further, and in some surprising ways: one owner of a Privilege yacht had the builder install a hot tub on the flybridge. Let your imagination run wild.