The Bay Shore dining scene is in for a travel-inspired restaurant when Coastal Kitchen & Daiquiri Bar opens. Owners of popular Mexican restaurant Verde Kitchen & Cocktails, Anthony and Andrew Tartaglia, wanted to open up a new place where they could flex their creativity in the kitchen.

“I love going on vacation–Jamaica, Barbados, Cuba–and we really wanted to bring that back to Long Island,” Anthony said. “We were just waiting for the right moment.”

Their moment came in May 2016 when they signed a lease for the old Bay Shore Furriers space. The building was constructed in 1938 and the demolition process revealed many structural treasures like old stucco walls, aged tumbled bricks and beautiful rafter beams. The charming elements fit perfectly into the design concept for the new project.

“We want [guests] to feel like [they’re] on vacation,” said Anthony. “Maybe [they’re] in the Caribbean, San Juan or Cuba–a destination other than here.”

Five brand new, factory-style windows have been cut into the side of the building to bring more light into the space. The storefront will have matching windows and six doors that open to the sidewalk for alfresco dining in warmer weather. A custom-made, high-top bench hugs one wall across from the bar and seven or eight tables with bar stools will line the other side.

The laid-back vibe will be enhanced with “live music, a shuffle board table, a pool table, a few TVs and a jukebox.” But the pièce de résistance is the custom-made, nautically-inspired, vintage brass tap tower. Flanked by brilliant, Caribbean blue wall tiles, it commands attention.

“The beer will be 75 percent craft from Long Island…but then we’ll also do stuff from California, Nicaragua and Panama,” Anthony said. “Pretty much any good beer from a coastal part of the world is fair game and a lot of it will rotate.”

There will be 14 tap lines and about 25 different bottles and cans, but beer isn’t the only thing on the menu. Patrons can also expect an array of “travel-inspired” craft cocktails, daiquiris and mojitos. A sneak peek at the cocktail menu shows exciting drinks like The Papa Doble Hemingway Daiquiri with Papa’s Pilar Blonde Rum, an Oaxacan Zombie Swizzle with Ilegal Mezcal Reposado and the Coastal Summer Sangria with Bridge Lane Rosé. Another not-to-be-missed drink is the Beach Plum Mojito made with a beach plum syrup from Briermere Farms in Riverhead. 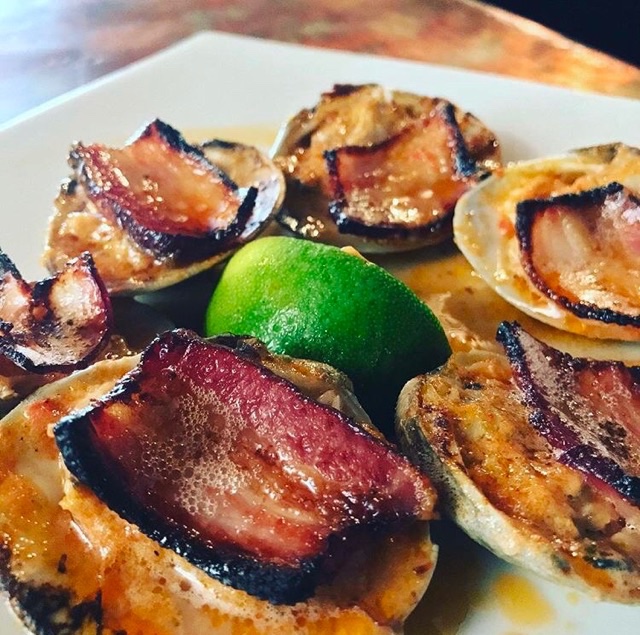 The food menu, which focuses on snacks, appetizers, sandwiches and burgers, is just as exciting. Anthony promised that customers can expect to receive “the same level of quality” that they do at Verde. The menu will be full of organic, local items that border on the healthier side.

“We have a lot of cool stuff on the menu, but if I had to pick a favorite, it would be the Mofongo Bites. It’s the most famous Puerto Rican dish,” Anthony said.

“We’re like an exotic, eclectic, fun bar and restaurant with influences from wherever we want to take them from,” said Anthony. “This is our fun place—100 percent.”