Critics hailed season 4 of Orange is the New Black as the darkest yet for the Netflix mega-hit. The dramedy more often than not aired on the side of drama, taking on race, religion and police brutality. The final episode left fans hanging: During a prison uprising, Dayanara “Daya” Diaz gets hold of an officer’s gun and holds it to noted racist officer Humphrey’s head as other prisoners urge her to shoot. The season then faded to black.

After a year of suspense, viewers will finally get some resolution when the series returns June 9. They’ll also get to catch up with Cindy “Black Cindy” Hayes. Played by Adrienne C. Moore, an Atlanta native living in New York, Black Cindy tends to provide comic relief, even when tackling issues such as religion (she converted to Judaism and in season 4, began a turf war with a Muslim inmate before realizing they get along). Unable to wait another moment for details on the new season, I phoned Moore for Orange is the New Black season 5 spoilers, her take on Black Cindy’s evolution and her recent dive into puppy parenthood.

Last season ended with a major cliffhanger. Can you spill any Orange is the New Black season 5 spoilers?
We take over the prison. It takes place over three days and it’s about how we stand up for ourselves and fight for our rights and justice for Poussey.

Poussey’s final words were, “I can’t breathe,” which matched those of Eric Garner, whose death was one of many protested by the Black Lives Matter movement. The show also hits on other hot-button issues. How do you feel about Orange is the New Black’s penchant for adding to these debates?
At the end of the day, there’s a lot to be desired and changed about our prison system [like privatization and overcrowding]. One thing I enjoy about being on a show like Orange is that we talk about that. We expose those issues. This season, we continue to tackle Black Lives Matter and police brutality. Hopefully, we’re raising the conscious level and people will begin to see and demand change.

The show has been hailed for featuring women of various different shapes, sizes and backgrounds. What’s it like working with such a diverse cast?
We not only have women in front of the camera, we have a strong group of diverse women behind the scenes. It’s very empowering and inspiring. Not to take anything away from the men who contribute a great deal to the show but you hear so much about there not being equal opportunities for women. To be on a show where you see that we’re just as strong behind the scenes as we are in front of the camera, it feels like we’re moving in the right direction.

You went from recurring to season regular in season 3 when your character began to explore Judaism. What do you think about your character’s evolution?
She’s still growing and changing. It will be interesting to see even with the current season how she tackles motherhood and responsibility. For example, she’s faced with being in charge of someone and it’s difficult for her.

How did you get into acting?
My mom would always put me in different programs. Professionally, I didn’t circle back until after college. I was working in advertising and marketing and I had a change of heart about what I wanted in life. I was working a 9 to 5 job in Atlanta and started getting back to community theater. I took courses at local theaters until I finally took the plunge and decided to move to New York for grad school [at New School]. Once I finished New School, I was thrust into the industry like every other actor in New York. I was able to start doing voiceover work.

How did you get your break on the show?
I initially went out for Taystee but they obviously chose Danielle. They circled back around and wanted me to try out for this character. I was doing a musical at the time and it was the last day of tech week. If you’ve ever heard actors talk about tech week, you know it’s a 12 to 14 hour day. I had to go try out after our final tech. 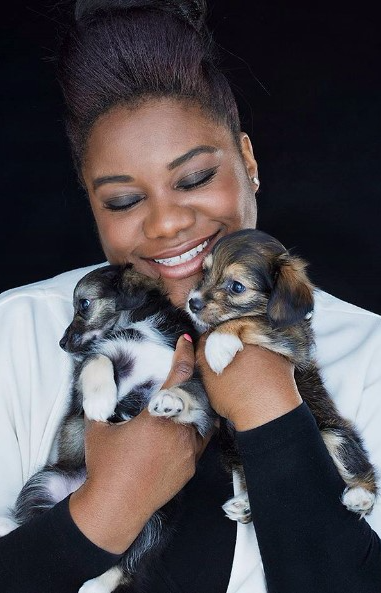 Speaking of big breaks, I heard you recently gave one to a pair of rescue puppies, Lola and Mowgli.
Yes, I just became a dog mom. I agreed to sponsor them for a few days and I clearly became a foster failure. I know I’m not the mother of children yet but there are so many qualities that are so similar. They just passed the four-month period and the vet told me that around this time they’ll start losing their teeth and growing adult tooth. Imagine my surprise seeing their little, bitty baby teeth falling out. In days, their adult teeth started coming in. I was excited and proud.

Did you play tooth fairy?
I tried to. But look, they get treats all the time. <laughs>

I also know you love to cook. What are some of your favorite things to make?
As a kid, my mom was always cooking things and more importantly repurposing food and leftover dinner. I try to do a balance between food that I order and food I cook. I love making food from leftovers. I love Thai food, Indian food. I cook a lot with Indian spices. Even if I’m making a Mexican dish, I’ll throw in some marsala.