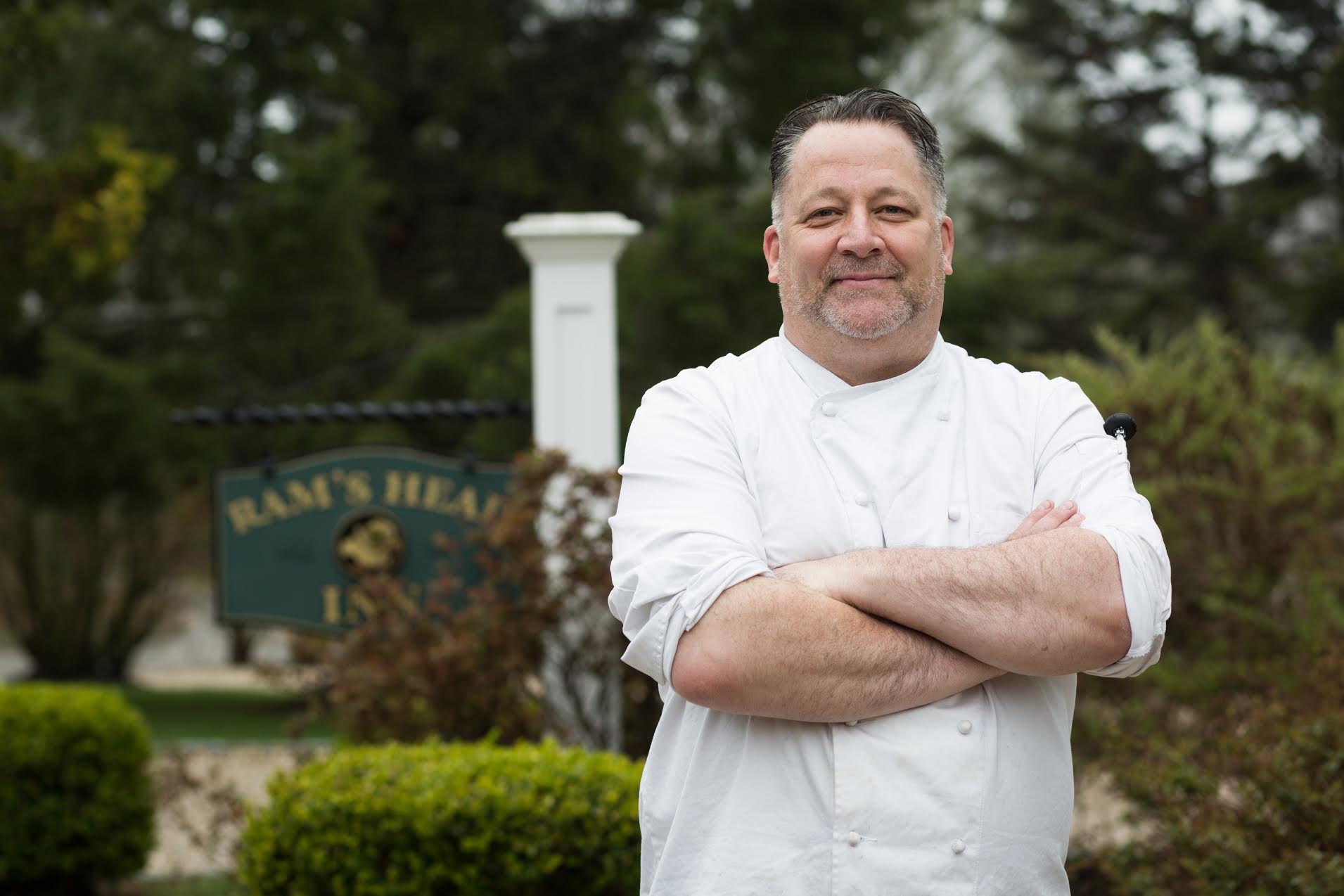 From Long Island to Manhattan to Italy and back, Matt Murphy has been perfecting his skills in the kitchen since he was a teenager. Formerly a chef at the famed La Colombe D’or and the Melrose Hotel, Murphy was hired as the new executive chef at the Ram’s Head Inn on Shelter Island in February. A waterfront venue that prides itself on local ingredients from the East End, Ram’s Head has proven to be an ideal match for Murphy, who has always been dedicated to serving fresh, high-quality food.

I caught up with Murphy to talk about his cooking style, the menu at Ram’s Head and how he likes to spend his time outside of the kitchen.

Tell me a little about your background and how you got started in the restaurant industry.
I started in the industry at 14 working at the Villa Victor in Syosset (now the North Ritz Club). I was thrown into the kitchen at that time and I’ve loved it ever since. I was 16 when I knew this was what I wanted to do for a living. Food is everything to me. It has allowed me to live a life doing what I love. It’s my passion; it’s exciting. I’ve worked in three-and four-star restaurants such as Rainbow Room, the Ritz-Carlton and Russian Tea Room and I was taught by some great European chefs along the way.

How would you describe your cooking style and how has Ram’s Head influenced it?
Because I was brought up by French and German chefs, I was classically-trained in French cuisine, which was a staple in New York City. Though the diversity of the food scene has always been extensive in the city—and is even more so now—French cooking was very prevalent when I was growing up. My style is also influenced by my love for local ingredients (sea bass, fluke, oysters, hothouse tomatoes)—a mentality that fits in perfectly with Ram’s Head Inn. I’ve worked in big and small places and I think everywhere you work changes your style a bit, and Ram’s Head has made my cooking a little more sophisticated.

Can you talk a little about why the concepts of “farm-to-table” and “locally sourced” are important to both you personally and to Ram’s Head Inn?
I’ve owned two restaurants on the North Fork and it was always important for me to stop at the farm every single day. I think, and have always thought, that it is essential for a chef to know what’s available in the area. For 30 years, Ram’s Head has had this philosophy, even before the “farm-to-table” movement became a trend. We have a garden on the premises; we get our fish from local waters and our ingredients from local farmers. When Ram’s Head brought me in, I agreed to work within that framework and it was a great fit.

What’s your favorite item on the menu?
It’s hard to say because we change the menu as things become available. But one of the things I love is our farm-raised rabbit dish, which has been making a comeback. In the 60s and 70s, all French restaurants had rabbit, then it died down, and now it’s popular again. I guess things go in cycles.

What’s brunch like at Ram’s Head?
Brunch is unbelievable and we’re having a lot of fun with the menu since it’s not as serious as the regular dining room menu. We’re doing avocado toast, PB&J brioche French toast, fried burrata on prosciutto—and people are loving it.

What other restaurants do you enjoy eating at?
I eat everywhere. I especially like to eat at places where people break barriers with food. I don’t do fast food or food that’s not well cared for. One of my favorite restaurants is Le Coucou, in the city, which serves older French cuisine. I also love Central Michel Richard, which is my favorite restaurant in Washington, D.C. I had gone there with a friend and we ended up sitting at the bar and ordering every single thing on the menu.

Do you have a guilty pleasure when it comes to food?
Oh, definitely. Some of my favorite foods are caviar and foie gras, which is duck or goose liver. Also, anything fresh from local waters is unbelievably delicious to me. There’s nothing better than sitting down with a glass of wine and some local oysters.

Aside from cooking, what do you like to do in your spare time (when you have any)?
I’ve been collecting art, everything from contemporary to Renaissance, and I go to a lot of museums. When I lived in Manhattan after college, I was close to the Met. I would pop in and spend 45 minutes there every day. I just admire the genius of it; artists do things nobody else can do. I mean, there was no TV in the 1700s…It was all out of their imaginations. And I think cooking is a little like that as well.