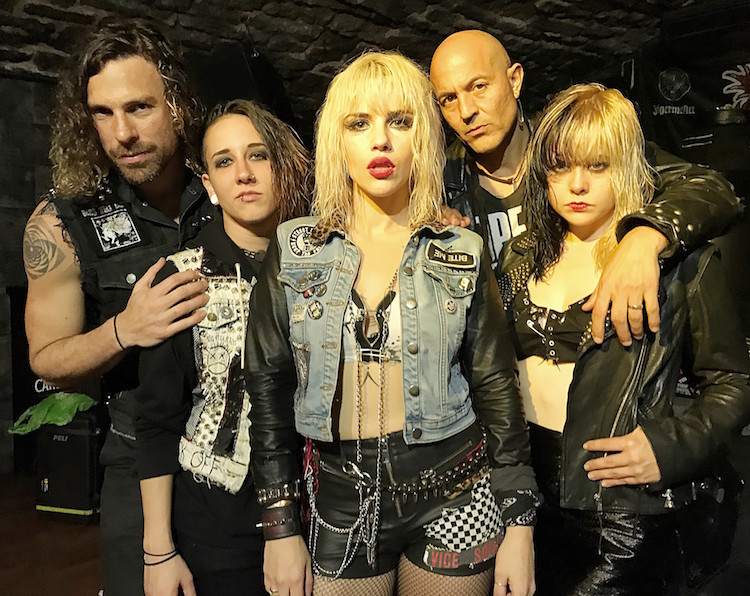 It’s fairly uncommon for a band to be discovered by not only one rock music legend but two, who are even the subjects of their own documentaries to boot. But that is precisely what happened to modern day punk rock group Barb Wire Dolls.

The group, formed in Greece, first caught the attention of Rodney Bingenheimer, the longtime west coast DJ and host of Rodney on the Roq. Next came late/great Motörhead bassist/growler Lemmy Kilmister. It culminated with the band’s first-ever US show in December of 2010 (courtesy of Rodney) and a recording contract (courtesy of Lemmy).

July 7 will mark the release of the group’s latest album Rub My Mind. The following day, Barb Wire Dolls is slated to perform at Northwell at Jones Beach Theater as part of Vans Warped Tour. Barb Wire Dolls guitarist Pyn Doll discussed the show, album, being discovered and an interesting prior profession.

Let’s start by discussing the new album, Rub My Mind.
We met Eagles of Death Metal when we both played Riot Fest in Chicago, and we invited them to record at the commune on the island of Crete (Greece) where we come from. Then David Catching of Eagles of Death Metal invited us to record at his studio in Joshua Tree, California, called Rancho De La Luna. We were honored because his studio is where the desert rock movement began with Kyuss, and then Queen of the Stone Age, who all recorded their albums there.

As we were set to record there, the horrific Paris attacks happened at their show [on Nov. 13, 2015]. David told us to still come and record our album here because the music has to keep going. We ended up writing many new songs that reflected how we felt at that time just as we entered his studio. Then, on the last day—we recorded the album in only two quick days—Iggy Pop and Josh Homme showed up to record Post Pop Depression. It was a surreal experience. We captured the vibe of the desert and the melancholy of the world in this album.

What is the story behind the song “Back in the USSA,” and what are some memories of filming the video?
It was written after the Paris attacks and it was just a quick song that came out spontaneously. It says how we feel about the political situation. The French film director Romaine Zawadski, who did our “Surreal” video from our last album, did it again. He’s a genius.

How did the band cross paths with Lemmy Kilmister and Rodney Bingenheimer, and how much of a help were each to the band’s career?
The crazy thing is that we met them both on the very first night we arrived in Los Angeles back in 2010. Rodney discovered us and was playing our music non-stop on his famous KROQ radio show called Rodney on the Roq, and he invited us to America to play a KROQ show. We sold everything we could and came. He announced us at our sold-out debut show at the Roxy Theatre (in West Hollywood).

But the funny thing is that on the first night in LA, we had dinner with Rodney, then went to see the famed Sunset Strip. We ran into Lemmy and he was very, very cool. We talked about the Sex Pistols, The Damned and the state of music. Who knew that five years later he would see us live at Whisky A Go Go and offer us a record deal. What a huge honor. We’re humbled that he loved the band that much and told us that we are the new generation, and that we should just go out there and kick ass every night.

Is it true that the entire band hails from Greece?
Only the original three of us are: me, our singer Isis Queen and our drummer Krash. We toured as a three piece for years before adding the two American girls, Iriel Blaque (bass) and Remmington (second guitar).

I also read online that you are a professional surfer.
I was. And a professional skateboarder, too. Have lots of memories and I still skate and surf whenever not on tour.

Where are some of your favorite places to surf?
Hawaii, Mexico and Southern California mostly, though I’ve surfed in over 20 countries in my lifetime. Being home in Crete with my bros is still the best surf sessions possible. When you have a “crew,” it becomes more about the search and not the destination. It’s a lifestyle that truly amazes me that it can still exist in this day of polluted waters and environments.

What can fans expect when the Warped Tour hits Jones Beach?
An experience of real, raw and powerful live music that will inspire them to go out and live their lives with confidence and intelligence.