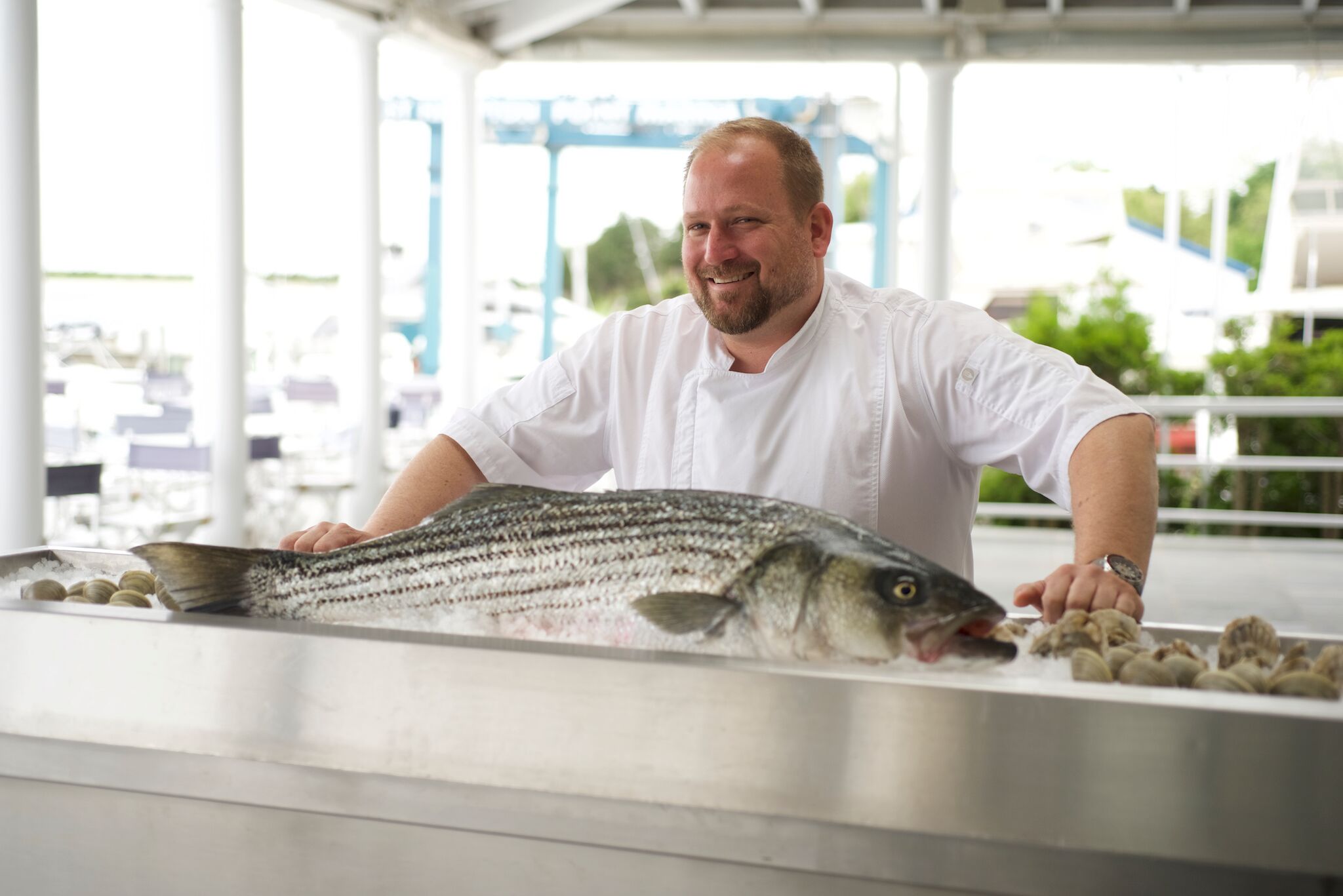 Go ahead and call it a comeback. After leaving East Hampton Point in 2010, executive chef Craig Attwood returned in May for the 2017 season and is using his international culinary expertise to help revamp the restaurant. The well-traveled Attwood has been influenced by cuisines all over the world—from South America to Asia—which has given him an unparalleled appreciation for different seasonings and spices. By fusing this knowledge with what he already knows about traditional American comfort food, Attwood created a menu at East Hampton Point’s stunning waterfront venue that has something for everyone to savor.

Attwood was able to take a moment outside the kitchen to discuss his return, the new feel of the restaurant and what has impacted his cooking.

Tell me a little about your history in the restaurant industry and why you decided to become a chef.
I started cooking as a kid with my mother and my neighbor. I worked in restaurants as a teenager from age 13 on—washing dishes, prep, cooking—at places like Mario’s High Hook and various little Italian or seafood restaurants that don’t exist anymore. Then I went to BOCES in high school for cooking, and I guess you could say I “found myself” there. I decided I wanted to go to culinary school, which I did at New York Institute of Technology. At 20, I moved to the city to do an internship and stayed there for 12 years, three of which I worked at Judson Grill, which has since closed.

You were the executive chef of East Hampton Point from 2008—2010. What made you want to return?
I had remained friends with Michael Capoferri, the general manager of the property, and I just had a fondness for the place when I was here. I had left for personal reasons. They’ve recently been reinventing the restaurant and I suppose I was a part of that reinvention; they redid the interior, gave it a new feel. It’s a little more relaxed because that’s the direction dining is going in. It’s lighter, more fun—people want to go somewhere, have a good time and not feel uptight.

What makes East Hampton Point’s location so ideal?
Apart from maybe some spots in Montauk, it has the best sunsets because it faces west and because of the way Three Mile Harbor is set up. We don’t get to see it much from the kitchen, but when you step out, it doesn’t even look like you’re on Long Island.

What is your mentality when it comes to preparing food?
It’s all about buying the best ingredients. Especially here in the Hamptons, it’s important to go to the local farms and have seasonal produce that fits the climate. It’s really just taking what’s available and treating it well, seasoning it. I like to use a lot of acid, vinegar, lemon, lime—I think it just brings out the flavor of everything. 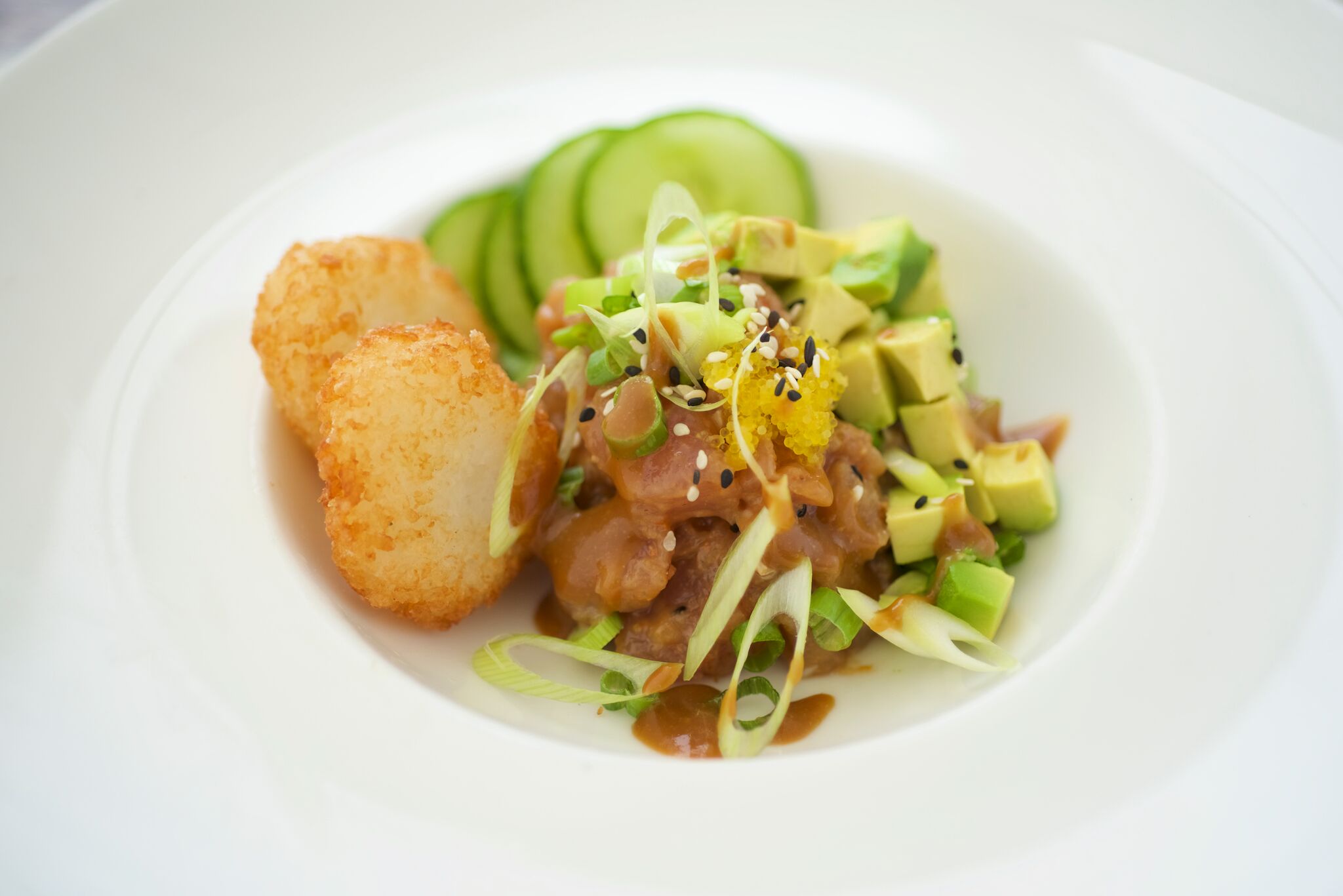 Do you have a favorite menu item?
You can’t go wrong with strawberry rhubarb with burrata, but the ceviche and poké are what I lean towards. We have local fish, which for the next month or so will be wild striped bass or black sea bass. I’m more of a fish eater so that’s what I like.

How have international cuisines influenced your style?
From my first day working in the city as a 20-year-old, I’ve worked with a lot of cooks from South America and one of my good friends is from Peru. I was introduced to a lot of different cultures and foods, loved the flavors, the spice, the heat. Not only have I been influenced by South American cuisine, but I also use a lot of Middle Eastern spices. When I was 20, I also worked at Pico, which was Portuguese [and] had a lot of influence from Asian spices that were brought via the trade routes in the 1400s. Just learning, studying and researching about that, the places I’ve worked, the people I’ve met, the different places I’ve traveled and restaurants I’ve eaten at—I think all those things are very influential.

How do you spend your time on a day off?
I would most likely spend the day with my kids, or if my boat is working I’ll go out fishing, go out to dinner out here somewhere, say hi to a chef friend or two.

If you could only eat one food for the rest of your life what would it be?
I would have to say Indian food. I just love the flavor, the balance of flavors and spice. It makes me happy—I could eat it every day.