Pristine beaches, charming hamlets, natural beauty and glorious light aren’t the only things that have made Long Island’s East End famous worldwide. Art has always been a key ingredient in the mix. The Hamptons are a global cultural force in part because revolutionary artists have called it home since the late 1800s. Echoes of Walt Whitman whisper, and the soft, shimmering sands and churning seas painted by Winslow Homer are just beyond the dunes.

In the post-war era, European émigrés and artists across America flocked to New York, which was quickly supplanting Paris as the new art capital of the world. The combination of stunning landscapes, proximity to Manhattan, a railroad connection and, ironically, affordable housing drew Jackson Pollock and Lee Krasner, Willem and Elaine de Kooning, Max Ernst, Robert Motherwell and Helen Frankenthaler and later, Andy Warhol, John Chamberlain and others to Long Island’s eastern reaches. Surrealist painter Hedda Sterne even fell in love with the Big Duck, proclaiming it proved “that the United States was more surrealist, more extraordinary, than anything imagined by the Surrealists.”

For more than a century, serious art, artists and collectors have called the Hamptons home, giving rise to a litany of exceptional galleries. This summer is no different and the tradition continues. Pulse visits five that exhibit work both from and inspired by the East End, as well as that of leading artists around the world. 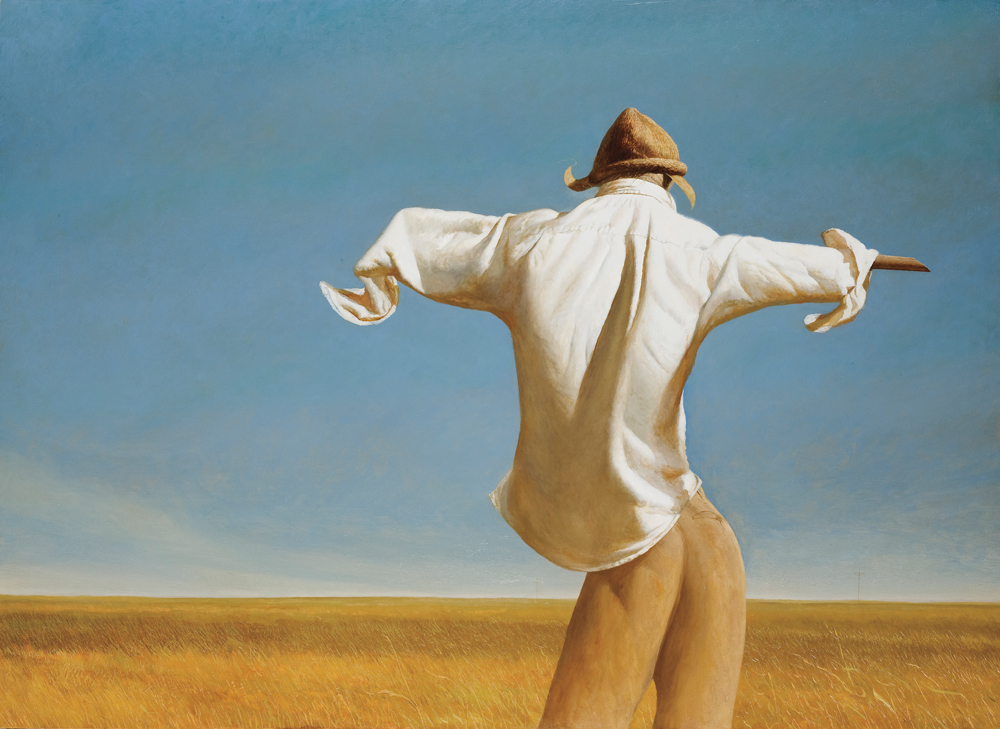 RJD Gallery: Two group exhibitions, Suspension of Disbelief now through July 16, and The Girl Next Door from July 22–Aug 13, followed by Andrea Kowch’s Into the Wild, Aug 26–Oct 1.

Like a phoenix rising from the ashes, Richard J. Demato’s RJD Gallery has re-emerged and is presenting a characteristically full and fascinating season of exhibitions. In the December 2016 fire that ravaged the Sag Harbor Cinema building, RJD Gallery was destroyed, tragically taking with it many works of art. As with the mythical firebird, renewal required a quest. In this case, it came in the form of a move. The gallery has relocated to a newer, larger space on Main Street in Bridgehampton, which means it can display even more work.

RJD has a unique aesthetic, focusing on “magical, figurative realism, narrative portraiture and urban landscape.” Another way to say that would be imagery of women and men, animals and sometimes places telling stories and confronting the viewer in extraordinary and unexpected ways. Myths and fairy tales, historical dramas and imaginary realms all come to life with great technical prowess in the work of artists who exhibit under this roof.

Suspension of Disbelief is what writers and directors count on to capture audiences and sweep them into fantastic tales, thus the title of RJD’s first summer show. It features international artists who infuse their works with dreamlike juxtapositions of reality and impossibility. From late-July to mid-August, The Girl Next Door revisits and redefines an archetypal American figure. The season closes with recent works by Andrea Kowch. Kowch’s instantly recognizable style is enigmatic, engaging and sometimes unsettling. Crows and insects, stormy skies and fertile farms fill her otherworldly world—a cinematic universe populated by confident, poised, porcelain skinned women with uncontrolled, flowing hair. Despite the Andrew Wyeth-like landscape, Kowch’s American Gothic sensibility relies on impassive gazes from her female subjects and a sense of unease even within the most familiar and reassuring setting—gathered around the kitchen table. 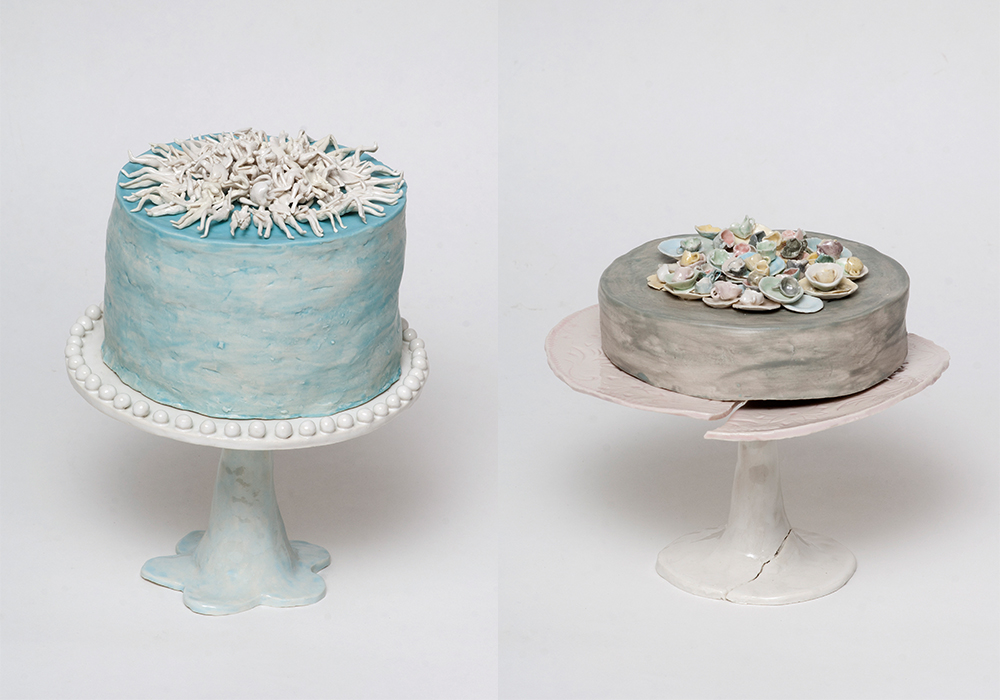 Sara Nightingale is a sophisticated little gallery run by a woman with a big heart. Not only does she work with and support upcoming artists, giving some their first big break in a difficult market to crack, but she carries her passions and dedication beyond her eponymous gallery’s walls. Starting this season, Nightingale is designating one non-profit as a beneficiary for every show, with a percentage of sales going to that organization. “It’s more about raising awareness for these groups than donating millions of dollars. But it’s a fun way for me to be involved in the community,” she said.

The gallerist is also sacrificing some of the summer’s prime exhibition time to participate in The Big Tent, a village block party and benefit art sale that will help raise funds to restore the Sag Harbor Cinema and make it a cultural center. The event goes down on July 16.

Philanthropy may be in her heart, but at the core of Nightingale’s business is serious, thought-provoking art that speaks on many levels. Look for a group show early in the summer called #friendswithboats with decidedly not your typical beach scenes and seascapes. Also surprising are Monica Banks’ porcelain sculptures slated for July 22 through the end of the season. Banks has recently established a name and recognition of her work after winning an award of merit in the Long Island Biennial 2016. Her dainty cakes carry a surrealist bite, as writhing masses of tiny figures, effigies of dead birds or assemblies of insects replace frosting, flowers and sprinkles. Testing boundaries and pushing limits have always been part of Nightingale’s mission. Since 1998, she’s been exhibiting and promoting works that engage with social issues, express diversity, contribute in a fresh way to visual culture and aren’t afraid, like she herself, to take risks. 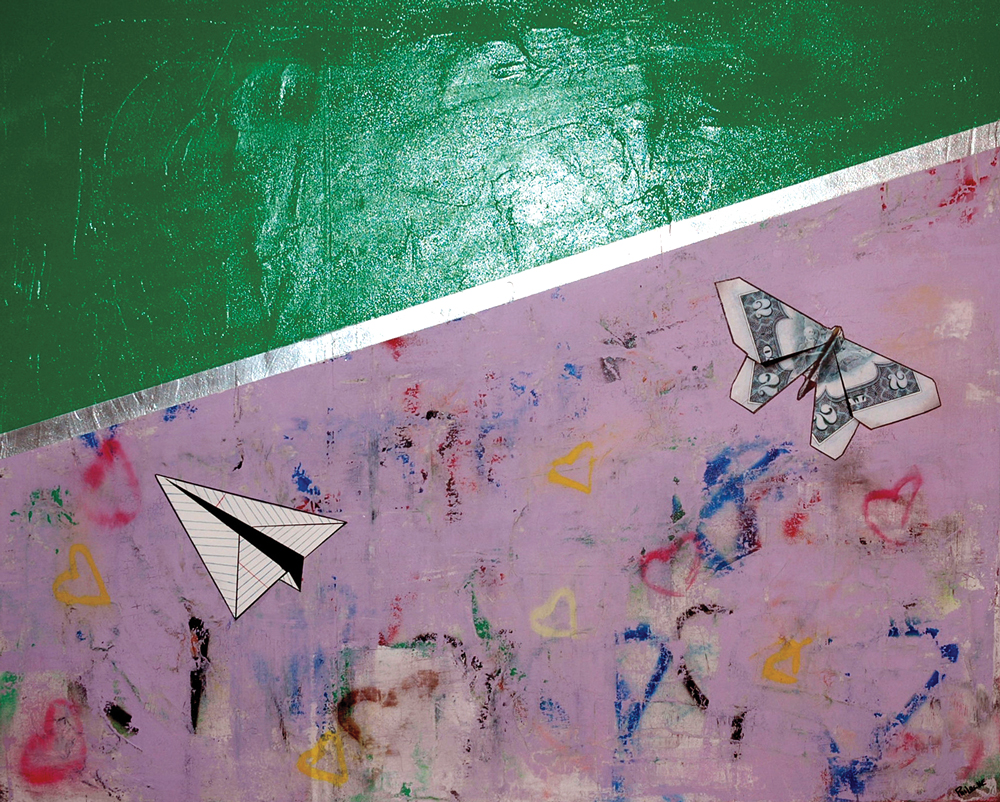 Director Bonnie Edwards has a history of establishing successful galleries from Nantucket to Maui, but for the past three years, the Long Island native has brought a wide range of contemporary art to Bridgehampton. The gallery is bright and airy, the artwork is upbeat and the vibe is friendly probably because Edwards is welcoming and happy to share her enthusiasm for the work she exhibits.

Following their Springtime Beauties exhibition, featuring local artists like Megan Sirianni-Brand, Chase Edwards hopes to make a splash this summer with return shows from Guy Stanley Philoche and Bob Tabor. Come Fly With Me presents the new series of color-saturated, expressive, textured works by Philoche. Haitian-born, Yale-trained painter Philoche fills his canvases with color, line, signs and references. Names, numbers and letters appear in abstractions laced with meanings. Philoche has borrowed snippets of cultural consciousness from board games like Monopoly and Operation, and elevated them into works that now grace corporate collections as well as those of celebrities like George Clooney, Uma Thurman and Julian Schnabel. In Come Fly With Me, there’s an invitation for fun and flight as mixed media compositions with doodled loops follow the paths of paper planes.

Bob Tabor’s lush, crisp photographs of water bring the ocean to viewers, but it’s an ocean of details within a sea of abstraction. The East Hamptonite’s crashing waves are digitally morphed, changing colors and shapes, crashing and swirling into bursts of energy, light and form. Tabor is known internationally for his sensitive equine portraits and dramatic seascapes. His visions of nature are romantic and refined. The Splash series shown at Chase Edwards presents refreshing, elegant, large-format prints, diptychs and triptychs in black, white and icy aquamarine. 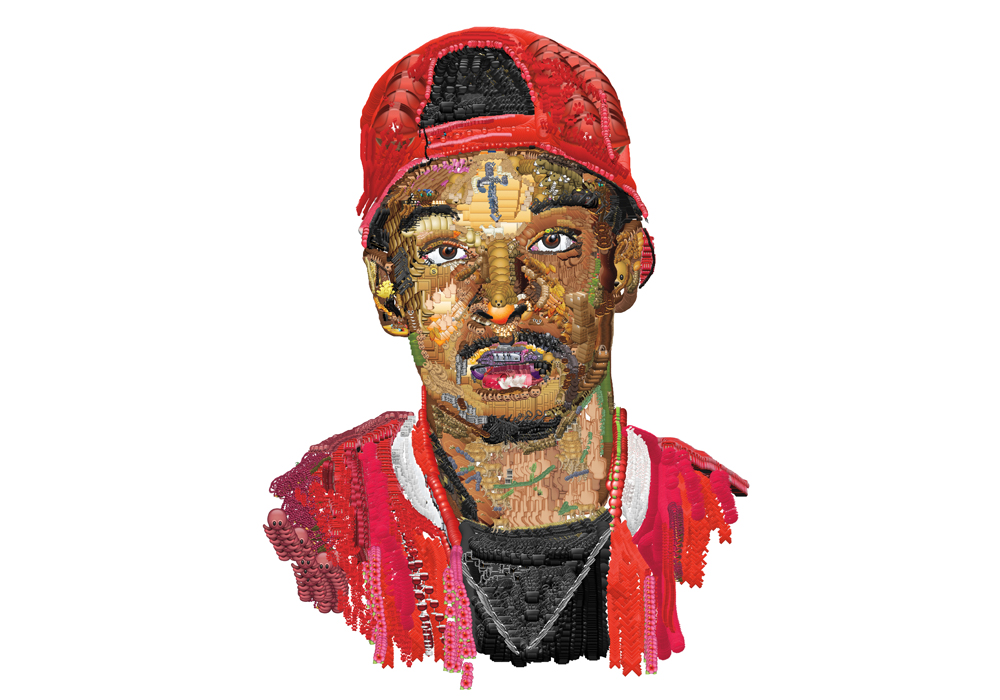 Now in its ninth season, Tripoli Gallery has become an established presence in Southampton. The gallery has shown iconic photographer Hiroshi Sugimoto and local art stars like Alice Aycock, April Gornik and Ross Bleckner. Gallery owner Tripoli Patterson is able to present museum-level artists due in part to his deep East End roots. Growing up amongst artists during the 1980s in Sag Harbor, Patterson developed ties that carry through to the present and show up on the gallery’s walls.

The gallery, tucked into a quiet alcove of shops off Jobs Lane, regularly exhibits group and solo shows of diverse, international and local artists, all of whom share an aesthetic bond, or as Patterson said, are on a common wavelength. Rather than safe, decorative pieces, look for contemporary art with a distinct vision.

This summer’s roster of shows includes a July solo exhibition of Caribbean artist Dominique Rousserie. Rousserie’s multimedia works mine the metaphysical realms of the unconscious, faith, mysticism and mystery. Symbols, materials and their inherent energies find expression in pieces that evoke the unfamiliar and invite consideration. Later in the summer, Yung Jake will fill the gallery with energetic works. An artist unconstrained by labels or boundaries, Yung Jake makes music, art and installation with equal ease and has presented them to audiences in museums and galleries from LA to Amsterdam. A group show of contemporary works will end the summer, but the gallery presents exhibitions year-round. 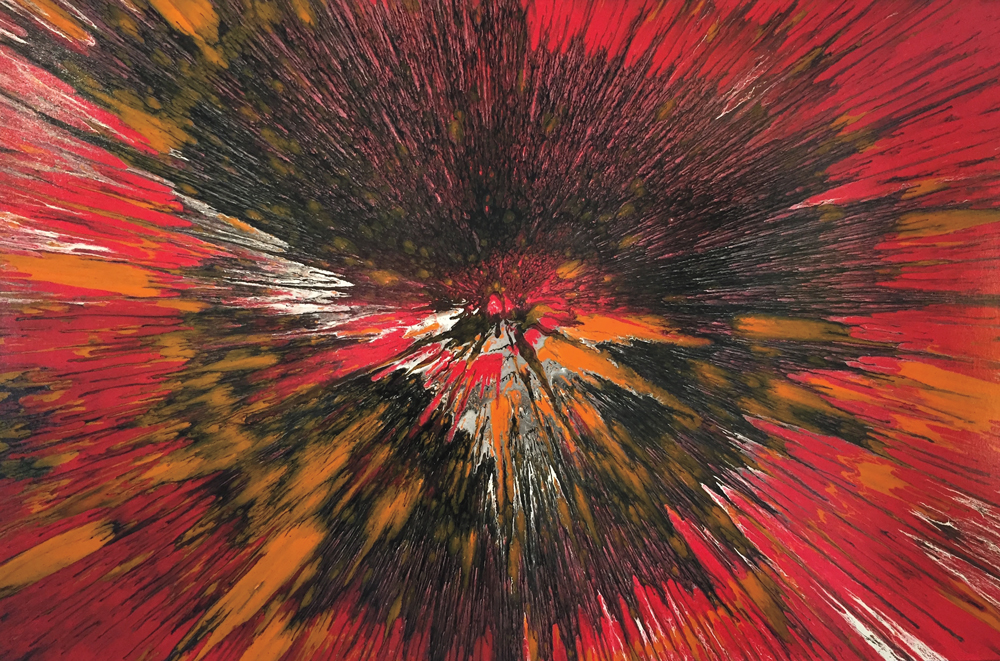 East of the Pine Barrens, but pining for MoMA? Gallery Valentine brings the bluest blue-chip artists to East Hampton audiences. The sun-filled space is reminiscent of a Manhattan museum and the walls are filled with works that perpetuate the impression.

The combination of an impresario with a talent for spotting talent, an art historian with a track record of running successful galleries and the child of an international art-star with ties to the area came together to create both synergies and a quality viewing experience. Music industry mogul Tommy Mottola joined forces with gallerist Ryan Ross in 2011 to bring a different type of work to East Hampton. They recruited Alexandra Fairweather, John Chamberlain’s stepdaughter, to connect them to the area and its artist community. Through changes in partners and personnel, the quality of work the gallery presents remains both constant and surprising. Gallery Valentine may be the only art space where giant popsicles share wall space with Picassos.

The gallery regularly shows works by a list of artists that reads like a who’s who of Modern and Contemporary Art. From Milton Avery’s semi-abstract landscapes, to fluid, ethereal color fields by Helen Frankenthaler, to challenging spray-painted street art by the global phenom mystery artist known as Banksy, every visit to Gallery Valentine will reward with unexpected delights.

Peter Anton’s oversized sculptures of cupcakes, candies and assorted temptations offer a playful nod to Pop Art and Claes Oldenburg, and act as an ode to the simple joys of summer. Who can resist a bright orange chunk of icy sweetness suspended on a stick, especially if it’s three feet tall? It takes on a different meaning when juxtaposed with selections that might include a rotund Botero that speaks in a different vocabulary than a flattened Alex Katz hanging nearby. Yet all communicate in the timeless language of metaphor, memory and meaning, expressed in color and line, through paint on canvas or sculpted in space.