“When I was a child, a big treat was going to Gosman’s,” recalled New York City-based multimedia artist Clifford Ross. “I remember saying to my father, ‘Oh, we’re at the bottom of the alligator’s jaws.’ I still feel like I’m on the bottom of the alligator’s jaws. With Long Island’s East End, there’s this bird’s-eye idea of looking down at a map—of being at the edge.”

On July 16, Ross, now silver-haired but with an exuberance that belies his 64 years, will open his sprawling Light | Waves exhibition for the Parrish Art Museum’s Platform series, an open-ended invitation to a single artist to consider the entire museum as a potential canvas. Ross, who most assuredly is counting on outdoing his similarly immersive 2015 mixed-media exhibition at Massachusetts Museum of Contemporary Art, will be unveiling six never-before-seen, 148”x224” photographic works featuring his ultra-sharp hurricane wave images, painstakingly printed with ultra-violet cured ink on custom Maple veneer. The works, entitled Hurricane Waves on Wood, look like triptychs, but are in fact comprised of 12 intimately-chosen panels. They will engulf the viewer in the Parrish’s gorgeous Permanent Collection gallery, much like Ross has found himself engulfed, shooting the tumultuous storm waves off the coast of East Hampton since 1996.

“When I’m in there up to my neck—or at least my chest—it’s not the Long Island that people usually think of, in terms of holiday, warmth and summer,” Ross said. “I am revealing a part of the Hamptons that visitors don’t usually experience while on vacation—the drama and power of the sea when roiled by major storms and hurricanes. These storms are the messengers. Their increasing intensity reveals the fact of climate change.”

In conjunction with the exhibition, which runs through mid-October, the museum will be holding a cross-disciplinary symposium on water and climate change on Sept 22. The day will be filled with panels, talks and workshops by guest speakers from various disciplines who will explore water as both a threatened resource as well as a destructive force. Considering Ross’ unusual relationship with hurricane waves and their increasing fury, the artist is in a unique place to reflect on the changes he’s witnessed up close and personal over the last two decades. “The long story on this is: nature is going to win and man will become obsolete and gone from this planet due to our hubris,” said Ross, who is quick to scoff at the man versus nature construct. “When I’m shooting waves, I’m not just looking at nature, but man’s unfortunate imprint on nature. The size and ferocity of these waves, due to our own intervention on nature’s cycles, is clear. Nature will win. Man is going to end up like a bloody Sonny Liston and nature gets to be Muhammad Ali.” 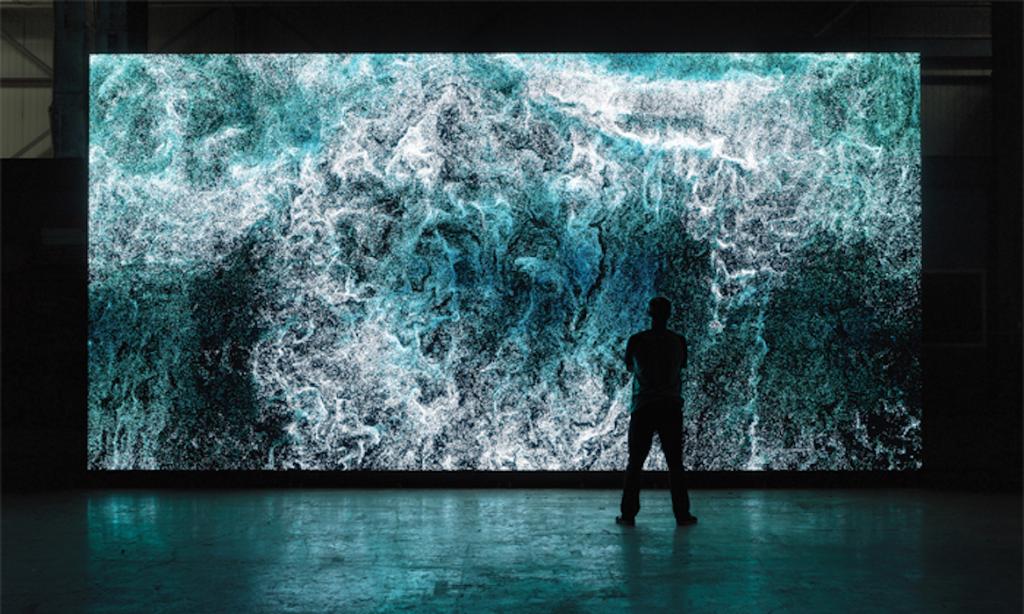 Ross’ Hurricane Waves on Wood series is not the only attempt by the artist to bring the ocean to land. For his Digital Waves video installations, Ross is entering into a harmonious conversation with the Parrish building itself, which sits on a 14-acre site in Water Mill. The museum was built to echo the famed artist studios erected by America’s most celebrated Abstract Expressionists, like Willem de Kooning, who flocked to the East End during the movement’s explosion in the middle of the last century. Ross, nephew of painter Helen Frankenthaler, spent the first 20 years of his career as an AbEx painter before moving into photography. Through his brilliantly hypnotic video work he is once again engaging in artistic conversation, this time on a 208”x208” LED screen that will fill a substantial section of the east wall of the museum lobby.

“I never made waves big enough to threaten people into feeling the sublime. The scale and physicality of the still images is one more way to show the drama of the ocean. Even looking at those however, the most obvious thing I wasn’t delivering to the viewer was movement. That’s what triggered the digital waves.” If Ross’ Wood Waves are effectively made up of digital images printed on organic, sensual, grainy flesh with a life all its own, his Digital Waves sees the artist seductively peeling away the skin in order to reveal the nude, mathematical drama of the wave’s internal architecture; its expressive algorithmic soul comprised of three million cascading dots. “I saw the abstraction of these dots opening up a possibility for a more expressive art than if I was trying to do something realistic. I became wedded to these dots six months in, but two months later we achieved something so reminiscent of my hurricane waves that they bored me. They were just another way to look a large wave in the face.”

This is when Ross had the child-like epiphany to move, perhaps even return, to a birds-eye view of his subject matter. “My words were literally, ‘Fly me up.’ My whole background comes out of Abstract Expressionism. Once I was high up and looking down, the wave looked like a flat surface. At that moment I found my bearings back in the land of Pollock and also Morris Louis and his Veil Paintings. Suddenly I was in Modernist heaven. I was looking at the ocean, but was suddenly confronted by the flat wonder of Pollock’s ‘Autumn Rhythm (Number 30), 1950.’”

In what may stand as the most delightful treat for folks heading to and from the Hamptons this year, Ross will also be erecting two massive LED screens measuring 606”x114” each to light up the exterior south wall of the museum, a bold first for the Parrish. That’s roughly 100 feet of eccentric, long horizontal crops of the original digital wave Ross was careful to orchestrate as a lyrical gift to the landscape. “It’s the opposite of a Times Square intervention,” said Ross, whose long-time love affair with what he calls “big nature” is just heating up. “It’s very much a loving appreciation of the building and the field in front…It will be as though the sea has reached across Route 27 to caress the building.”