Even the most abstract art is about something. It could be a mood; it could be a color study. It could be about nothing, which is still a statement the artist is conscientiously making. In the case of Martha McAleer, her abstractions are about happiness. “I like to make things that make people feel happy. I see so many people have so many problems and I like to give them something that brings them peace.”

In the simplest of terms, the works are interpretations of vacations. They’re about sun kissed places and footsteps on open terraces. “I was working in florals and I worked in that a really long time—and I sold a lot of them—and then I got really tired of it. I took a few years off and I started doing something like this, to work with an oil style, more old world…I started to work with some textures and it reminded me of tile in Spain or in Italy on the ground…the colors reminded me so much of traveling and summer…I started working with rulers and spatulas and stuff from the kitchen and I ended up coming up with a pattern…I need to have more white…I need to be reminded of light all the time.”

McAleer works in blue, yellow and red on white, not just because they are primary colors but for how they feel. She believes each has meaning: blue is about dreaming, yellow for communication and red for the heart. The result is her opening her arms for you to step into her world where you can escape to the clean whiteness of summer when there’s nothing to do.

Part of it has to do with the process. The repetitive mark making of a palette knife or a spatula is what lays down the stark white plaster of Paris. It’s not about perfection; it’s about imperfection. Shape shifting is the element of surprise the artist embraces as another form of liberation. “I don’t think anything is really perfect, I had these shapes shifted around…I don’t want them to be so planned out that you expect that it’s going to be here. I want to throw people off a little bit.” 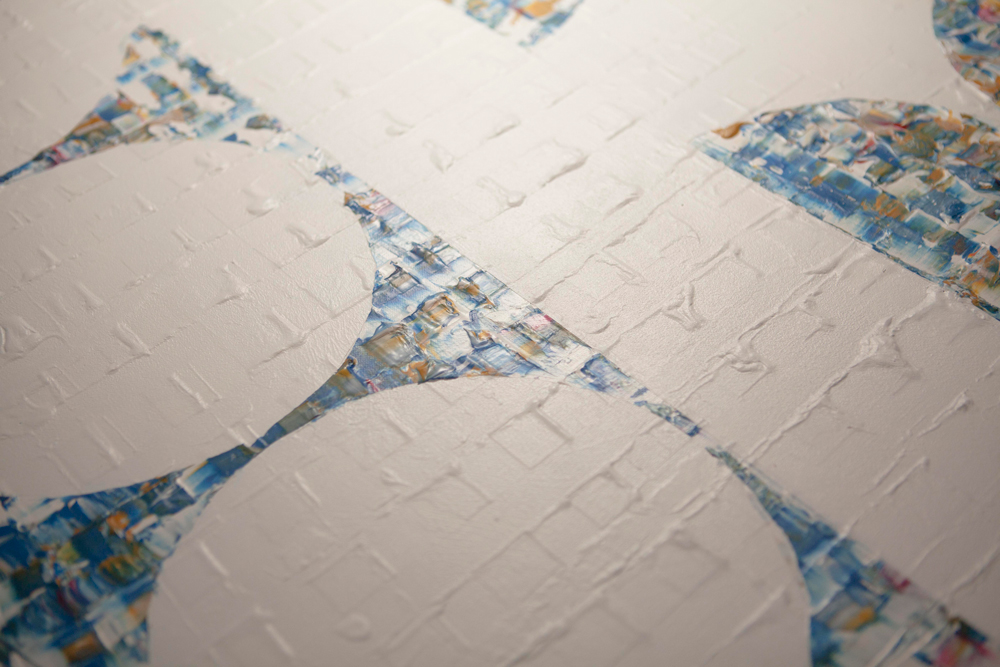 In an abstract way, the panels also reflect the world around her. There’s a lot going on in the paintings that can’t be seen, derivative of the natural process of the plaster taking its shape as it’s being applied. Circles are McAleer’s figure of choice for the continuum they convey and for their ability to manipulate the orientation of the panel in the way the shapes ultimately resolve themselves. “Like wearing a ring, eternity, I like that idea. I was also thinking that these are broken circles on the end and it kind of reminds me a little bit of what’s going on in the world. You’ve got a few countries that are doing really well, and then we’ve got some that are not and they’re broken off.”

McAleer is painting intuitively but also thinking about how the final piece is going to live with someone in another place. She’s very interested in symmetry and clean lines, hence the refreshing crispness to the renderings. If the background is the foundation, the paint and the colors are the foreground. The sense that the panels are somehow architectural plays itself out in a similar way. The plaster might be the framing of the building and the shapes set upon it are the rooms and the colors are the décor.

“Where does this find its equilibrium? Where does it feel most balanced? Is it going to be this, that, there? I’ll take a picture from way up high and I’ll put it on my phone and start flipping it to see how I feel about the weight of everything. Is it balancing out…it’s somewhat like being an architect. You draw a design and then you see whether or not it’s going to be able to stand and you create and adjust as time goes along. I do a lot of creating and adjusting.”