These are basically what I was doing up to around 9/11. They are based on language, music. The idea was to create a body of work that had no top, no bottom, no left, no right. The collector, he puts the pieces together in any sequence—do anything they wanted with them. They become a final statement when they are assembled. It’s kind of like the way language works: you get letters, the letters become words, the words become sentences, the sentences become paragraphs and you just keep building on it.

Paintings are more intellectual for me, they start out with everything I was told never to do. Don’t do squares because you can’t make a square look square, so automatically I want to do a square. You can’t mix certain things—painting and drawing. At what point can you integrate the two and still maintain its identity as a painting? My Alice in Wonderland series was based on that. I develop the ideas on paper, then I move to canvas. I am an oil painter and I work with a cadmium copal palette, which is very transparent. If I make a mistake, I have to go back in, sand it down, wash it out, resurface it and then redo that area.

It’s about frustration and tears—the essence of the chapter as opposed to the literal representation. You create an opening, you then subvert the opening architecturally so that when you look to go into the opening you’re forced back out and up again the same way Alice was.

The big one is Collective Thoughts. I assemble them the way I want them to be. There’s no room for modification, for bringing them together, for integrating them one against the other, to create diptychs and triptychs. Random Thoughts can be turned any way you want in any direction you want and those can be assembled into groupings and other pieces. Sometimes I will show them in diptych or triptych and some people buy them that way. The little guys are what I call Details. Some of them are details from Alice, some of them are Concise Thoughts, which are what I consider visual haiku.

My current work is Urban Abstracts. As a born New Yorker, when 9/11 happened, it was jarring. And it dawned upon me that I never addressed my city. I embarked on working on paintings that would kind of recreate my city the way I wanted it to be.

Urban Abstracts are done in three styles. The first is all abstracts—abstract space, abstract image broken down to try to capture the essence of an area. Then I incorporate the real image but treat it as an abstract object—to do it true to design, the architectural elements are in fact scale to the actual buildings or things that are being used. The third part of it is abstracted object in abstracted space. 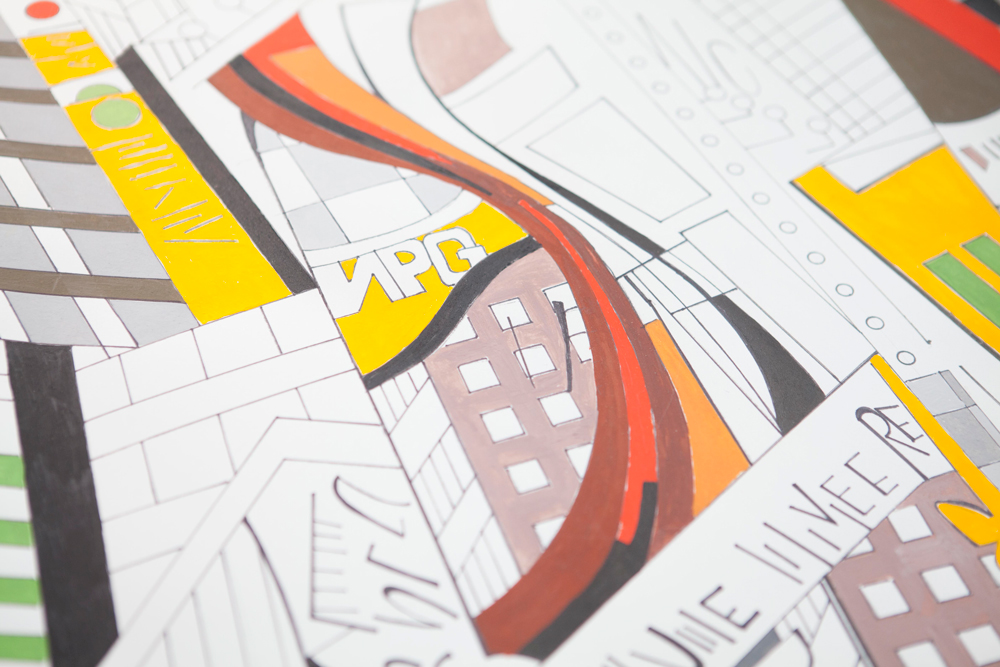 I like to control architecture, or architectural space in composition. By working back and forth, it also gives me an understanding of what I’m doing. Sometimes you become very enticed with what you’re doing. Colors are very enticing. You can really cheat with color. You can give the illusion of having a sound painting without actually having a structurally sound image. Color is sexy. People relate to color.

My work really comes out of cubism. It’s informed by the work of Picasso and Braque and Léger and Mondrian. I’m trying to move forward out of that, from where, say, Stuart Davis left off. To try to create a statement within that structure that hasn’t been done before, that’s my goal.

These have been a really interesting challenge because I got to deal with the architecture of Times Square and then find a way to incorporate it. And the palette was really difficult. Times Square is bright, it’s got a sense of daylight but it’s not daylight. It’s lit night and my regular palette is not effective for that kind of work. I worked on the palette for almost a year before I started painting them. I was working on drawings, sketches and all kinds of other things.

I need vehicles to create some classical order in paintings. One of the ways to do it is to work with elements that you repeat. And things like dots and checkerboards are easily repeatable, they allow you to orchestrate the space in a way that makes it work in a more classical sense. Like a Hans Hofmann, the notion of push and pull where you do the two-thirds rule and push the large into the small. By using checkerboards and dots, I can use them as a way of manipulating the space to get the kind of energy that I want. The paintings are simple, but they are complicated.

This space here is orchestrated actually, it’s played out like music. If you look at what’s going on in here, you’ll see that there’s certain repetitions that occur which kind of create a bridge in music. You have the lyrics then you have a bridge that holds it together. And then you go on your way again and then you go back to the bridge again. So I try when I orchestrate something to think in terms of the way music is put together. And to try to formulate this in that kind of a structure. And it works.

That’s what it’s all about. It’s not about telling people what they’re supposed to see. It’s about hoping they’ll see your vision. And be able to kind of run with it.”