Oceanic art is among the most magical in the world. Long before the Symbolists, Surrealists or Expressionists shocked Western eyes with work that looked beyond the visible, people without a word for “art” were creating powerful sculpture that expressed mystical life forces that guided their beliefs, behavior and society for millennia.

Most major museums around the world showcase tribal art. From New York’s Metropolitan to Paris’s Louvre, these collections complement paintings and sculpture from Europe and America. But it wasn’t always the case. Sculpture from Africa and Oceania was largely unknown to the Western hemisphere until avant-garde artists like Matisse and Picasso embraced the art of indigenous cultures. The females populating Picasso’s famous painting, “Les Demoiselles d’Avignon,” depict Kifwebe masks from the Luba peoples in Africa. This inspiration (and that of similar masks and figures) virtually changed the vision of Western artists and the course of art history throughout the 20th century.

Oceanic art spoke to Surrealist painters and poets as a visual metaphor for dreaming and a state of consciousness far removed from the constraints of Western thought. Indeed, most objects are representations of either spirit or ancestor figures, venerated by the living and used to perpetuate powerful beliefs about creation, affecting everything from fertility to agriculture to the initiation of young men and women into society. The use for some objects is unknown, and universally, with only a few exceptions, the names of the artists remain anonymous. Oceanic art is far less well known and comprises a smaller collector audience than African. This is likely because there is less material and because some of it, though by no means all, embodies an aesthetic sensibility that is less formal and more elemental, powerful and raw than that of a finely polished African mask. 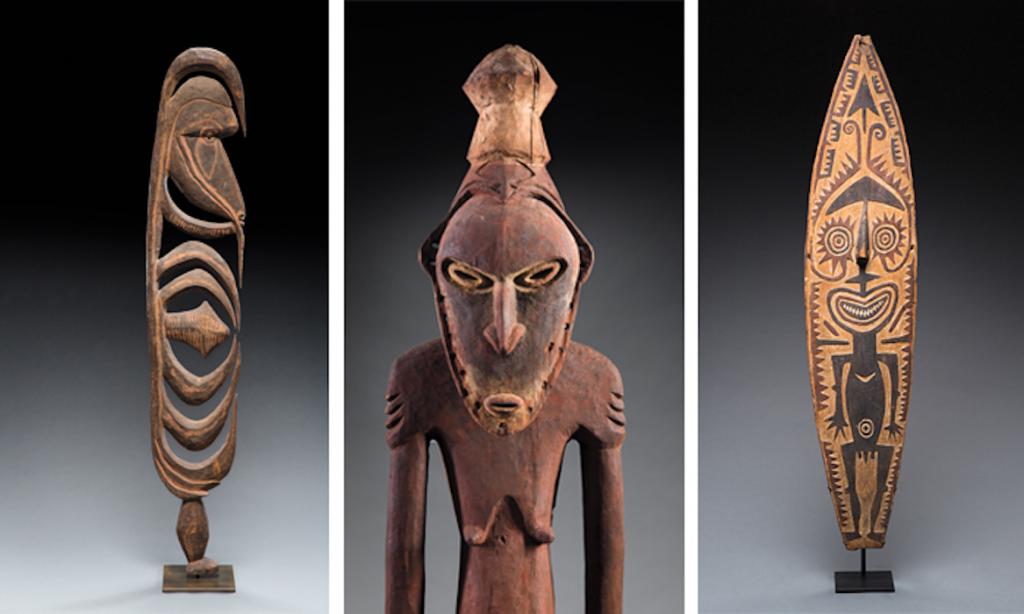 Oceania encompasses about 10,000 islands in the tropical Pacific Ocean, covering about one-third of the Earth’s surface but comprising less than one percent of its land mass. The largest island—second in the world only to Greenland—is New Guinea, home to 850 languages alone. Oceania is divided into three regions: Melanesia, which includes New Guinea; Micronesia and Polynesia, which includes well-known islands like Hawaii and New Zealand. There are hundreds of cultural groups populating the islands of Oceania, and nearly as many aesthetic languages as there are linguistics. The bewildering number of Oceanic cultures means that students and collectors will encounter a near-infinite variety of art forms.

Many of these cultures continue to produce art objects, but it is generally acknowledged by scholars, collectors and even the makers themselves that Western influences and commercial motivations have diluted the quality and intrinsic genuineness of such modern pieces. A general rule of thumb is that work made prior to WWII, and ideally before WWI, is the most desirable and “authentic,” having been created by groups who put the objects to regular use in a religious and social context. Objects made of bone, shell, ivory and pottery are more durable, but less common than those made of wood. Painting is almost completely unknown, apart from New Guinea’s Abelam groups and the aboriginal cultures of Australia.

Central to the spiritual belief systems of most Oceanic cultures is the concept of mana, or supernatural life force or power embodied in certain living persons, clan totems like the cassowary or alligator or objects, including masks and figures. Many such pieces have history going back generations, receiving veneration from tribal populations as they were consulted as talismans, especially of warfare—including headhunting raids, a regular activity throughout most of Oceania until 1900. Such masks and figures, though inanimate and speechless, seem to resonate with an energy that eclipses even their aesthetic power. Simple ethnographic items, like lime spatulas, combs and daggers are often imbued with a presence belying their utilitarian role.

An understanding of this history and geography enhances an appreciation for Oceanic art, but “reading” Oceanic art is an aesthetic exercise no different than approaching Impressionism or Abstract Expressionism. Like Cubism or Surrealism, the literal interpretation of nature is secondary to an exploration of symbolic expression through line and volume, texture and color. Few forms are more lyrical and terrifying, conceptually and compositionally balanced than a garra hook or yipwon cult figure from New Guinea. Both the jade pendants of the New Zealand Māori civilization and the wooden stilt steps of the Marquesas Islands represent the archetypal tiki figures for which Polynesia is famous. The giant stone heads called Moai that populate the landscape of Easter Island take their place among the world’s greatest sculpture.

The best places to start learning about Oceanic art are museums and the couch. In other words, there is no substitute for seeing masterpieces firsthand and reading about them in books. A modest investment in a few volumes will help to fine-tune aesthetic discernment. A visit to the Metropolitan Museum of Art (a world-class collection) and the Brooklyn Museum will also yield rich dividends. Other great collections in America can be seen at the Peabody Essex Museum in Salem, Massachusetts; the Museum of Fine Arts, Boston; the Denver Art Museum; the Minneapolis Institute of Arts and the most impressive collection of New Guinea objects in the world, the awe-inspiring Jolika Collection at the de Young Museum in San Francisco. 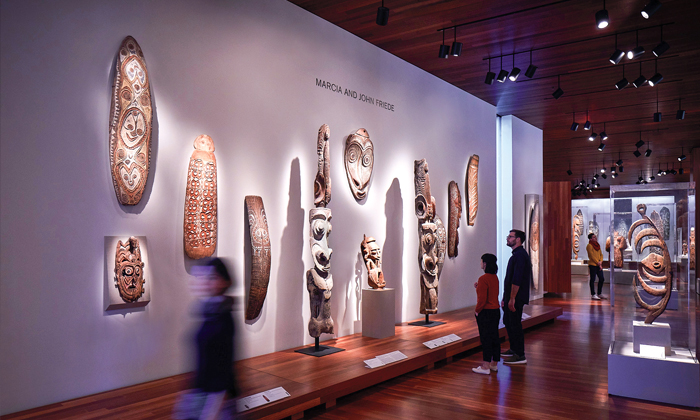 The tribal art market has traditionally been the domain of dedicated collectors and, of course, the dealers and auction houses who supply them. But ever since 2006, when an African Fang Nigl mask brought more than $7.5 million at a Sotheby’s sale in Paris, the art community has embraced the field as a collecting arena with which to be reckoned. Probably because tribal art works so well in the context of 20th century art and architecture—ironically furthest removed from its origin—it has gained recognition as an exciting aesthetic counterpoint to mainstream painting and sculpture. If your goal is to assemble more than a collection of tchotchkes, setting a high bar is imperative.

Neophyte collectors needn’t allocate a seven-figure sum to acquire a tribal masterpiece. There are many sweet spots throughout the range and once focused, an inspired new collector can start to build with knowledge gained from publications, auction catalogs and trusted dealers. In the field of Oceania, about $5,000 is the entry point for high-quality material. Five or ten times that can buy a small masterpiece worthy of the best collections. “[A] recent auction at Christie’s Paris saw very strong demand and prices for the Oceanic art offered,” said New York dealer Bruce Frank about the market. “The African offerings did not fare as well. In general, I have noticed an increased interest in Oceanic art. But top pieces can still be acquired for a fraction of the cost of a comparable African piece.”

Discussion about the price of art (like religion and politics) is sometimes delicately avoided. Don’t be afraid to ask “how much?” There is no better indicator of an artwork’s place in the aesthetic pecking order than what it will cost to own it. When it comes to value, large figure sculpture and other formidable objects usually command more than smaller, more intimate pieces, yet some of the most fascinating objects are amulets, charms and adornment worn or carried by their makers. Such personal objects can possess a power exponentially greater than their diminutive size suggests and can be even more expressive than larger work. 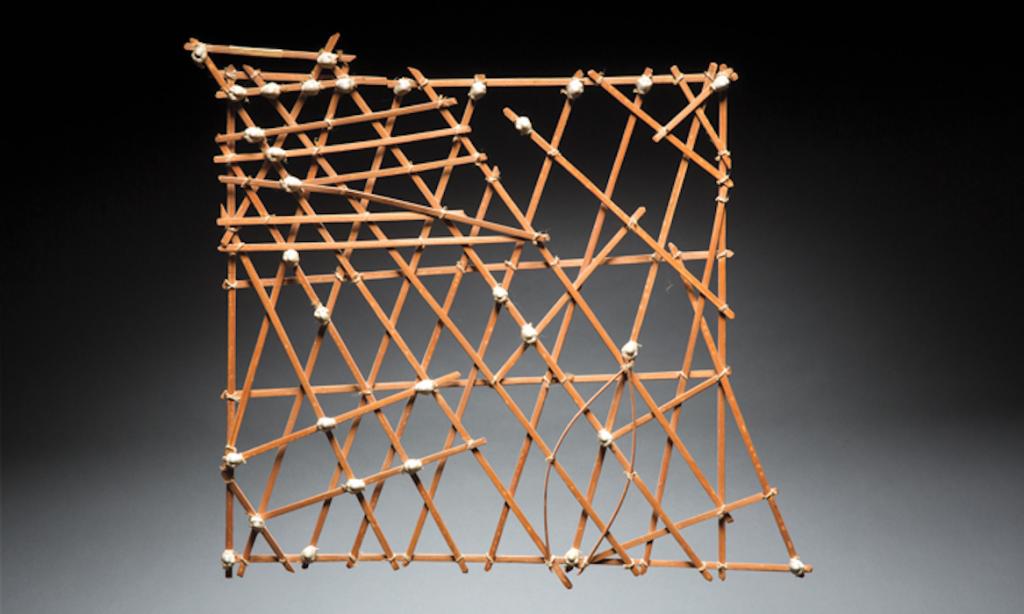 One way to catch the excitement of the tribal art world is to attend a fair, where dealers curate gallery exhibitions to showcase their finest offerings. Auctions held by Sotheby’s, Christie’s, Bonhams and other specialists create a frenetic activity for buying, selling and just plain watching what happens next. The hubs of tribal art activity are in Paris and Brussels, with dozens of local galleries and two important week-long annual fairs: BRUNEAF, taking place in January and June in Brussels and the Parcours des Mondes every September in Paris. Closer to home, May is New York Tribal Art Week, with a group of dealers showing under the banner Madison Ancient and Tribal Art (MATA). Every February, the San Francisco Tribal and Textile Art Show attracts dealers from around the world to California, where Oceanic art has a strong following.

New York residents are fortunate that their city remains the center of tribal art activity in America. All three major auction houses hold sales in Manhattan regularly. Be aware that auctions aren’t necessarily the best way to get into the collecting game. Auction houses may offer star pieces and set the bar for prices, but aren’t necessarily looking out for an individual’s best interests. Dealers, on the other hand, have reputations and a client base to cultivate. Most dealers show by appointment though some have galleries you can visit, like Bruce Frank Primitive Art Gallery, Pace Primitive and Tambaran Gallery. Michael Hamson Oceanic Art, located in Los Angeles, specializes only in Oceanic material.

Few dealers show their best material online, Hamson is an exception, archiving many remarkable pieces previously sold. “While the market for Oceanic art is smaller than other genres of tribal art, there are significant opportunities for collectors, even of modest means, to build important museum-worthy collections, from either specific areas of the South Pacific or even of particular object types—shields, drums, wooden bowls, etc.,” Hamson said. “That is the beauty of this field—great objects can still be acquired, masterpieces are still circulating and worthy contributions are waiting to be made.”

One note of caution pertains to eBay and similar venues when searching online for Oceanic art: nothing worth owning is offered in that space. Fakes, copies and tourist art abound, perfectly suitable for a tiki-themed cocktail lounge, but not as building blocks of a serious collection.