“This is where we build everything that comes in my head and won’t leave. I need to be inspired like everybody else and once I get inspired, my mind doesn’t quit. I can’t sleep, I have trouble focusing until I get this thought of a sculpture—it’s always a sculpture, it’s always dimensional.”

Robert Mojeski is looking for a way to forge his connection with the ocean through sculpture. He is devising kinetic, fluid structures that convey a sense of energy, whether or not they are moving. Mojo started his life as an offshore commercial fisherman and is continuing that chase through metal. He says he is stuck on fluidity and he is recycling materials to create another layer of rejuvenation. Even the fluidity of time is an element in his artistic context.

In “Trouser Snake,” a pipe was sliced into hundreds of pieces to create the ridges of a snake. Over a period of two months, the structure was allowed to rust, the patina articulating the passage of time and the fluidity of the elements. A coating was applied to preserve the current level of rust and then stainless steel was added as much for the zipper track as for the addition of another color. Gears, sprockets chains, the inner workings of a watch, copper…all of these make their way into Mojo’s work and have an obvious steam punk reference. 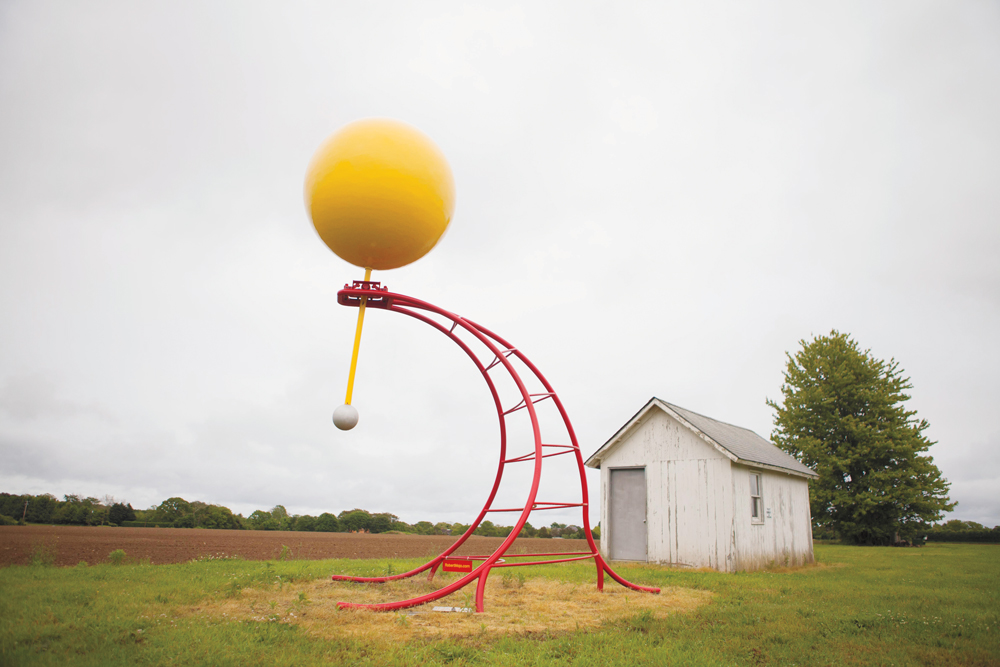 It’s not the artist’s intention to subscribe to the style, though he doesn’t mind the connection. What does bother him however, is the ridged straightness of geometric lines. To counter that, he’ll twist and turn materials according to what’s in his mind.

“This piece is called “Hard Benz I.” This is aluminum that’s been utilized in a geometric form and yet twisted…it took a lot of effort and power to twist it and so I put them all on stainless steel because I wanted the longevity of the piece to last forever. It’s stainless steel and aluminum and it’s geometric form in a twisted form…It makes sense to me and hence I build the dimensional aides of this as well. And I love it…this is how I perceive geometric form.”

There is an elegance to the work, guided by the grace of fluid motion. Mojo may be initially inspired by the nonsensicalness of turning something on its head, but his methodical process guides him to a very sensible place, whether that be an accidental seahorse where geometric forms came together to render the creature unintentionally or “The Tipping Point,” a possible opus for the artist. The enormous yellow and red structure rising up from an empty field alongside Montauk Highway in Southampton is a testimony of its maker. The primary colors are bold and true, like the artist’s spirit, and the piece is in constant motion, even when it seems still.

Mojo’s “ruling passion” knows no limits. “I have spent seven months on a piece just because it needed to be…I said to myself, ‘You have a problem. You’re making things that nobody’s asking for’…yet, I keep making it because it’s in my mind and it’s a bothersome thing…I’ll never stop.”