Speak the word Ferrari and a specific image comes to mind: a sporty two-seater, sleek and streamlined within an inch of its life. Most envision it bright red, and very fast. Thus when people first lay eyes on the Ferrari GTC4Lusso, they may not even recognize it as an F-car—save for the fender-mounted Scuderia badge. Ferrari’s new four-seat GT is as wide as a California king size mattress, a mere 10 inches shorter than a Cadillac Escalade and as flat as a flounder.

Our car was a warm metallic gray with buttery saddle tan interior. Its mature, distinguished appearance makes it the kind of car that appeals to confident types, those not seeking attention. Four distinctive rear taillight pods, matched by four exhaust tips, suggest something very serious lies beneath the understated exterior. Mashing the aluminum accelerator instantly asserts that this is a Ferrari, the angry V-12 engine opens wide and 680 Maranello horses stampede out of the chute. The Lusso (like every Ferrari) is all about the engine. Under the mile-long hood, pushed way back behind the front axle, is a big, naturally aspirated V-12 that revs to an intoxicating crescendo of 8,250 rpm. It makes 80 percent of its torque available at a leisurely 1,750 rpm but high-strung it’s not, until you wind through all seven of its dual-clutch, paddle-shifted gears and the un-enhanced, unamplified exhaust note bellows at the top of its Italian tenor lungs. 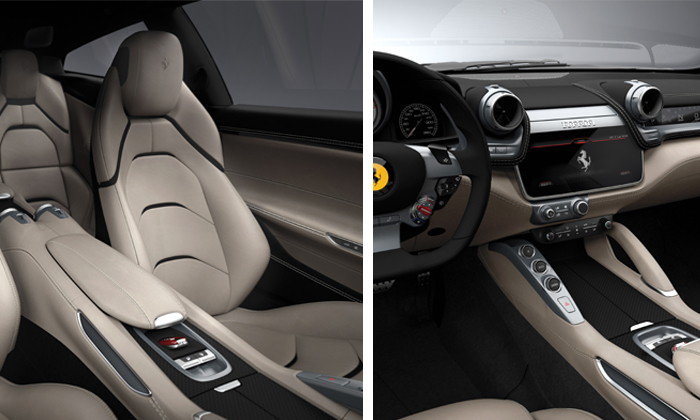 Ferrari has doubled the driving pleasure and the luxury with a grand tourer that turns coupes in this class on their heads.

Lusso—Italian for luxury—has been a word in Ferrari’s lexicon since the 1963 introduction of the 250 GT Berlinetta Lusso, without doubt the most beautiful series-production Ferrari ever created. That’s a bold statement, but one this writer will ably defend. The GTC4Lusso carries on the luxury theme and does an unimpeachable job of coddling its occupants like no Ferrari before. Except, perhaps for its immediate predecessor, the Ferrari FF, from which this offering evolved.

The Lusso can be appointed with a staggering list of options, it is a Ferrari after all. The “base” Lusso ($298,000) will do quite nicely. Our car, as optioned, topped $377,000. Its hand-stitched leather and tasteful trim express the craftsmanship and attention to detail expected from an Italian luxury product. Still the question is begged, “Really, four seats?”

Many luxury GTs claim four-seat capacity, but most of those rear perches aren’t fit for a pair of lovebirds (tiny, feathered ones). Not so with the Lusso, which accommodates two full-sized adults in its commodious backseats. Ferrari calls their interior layout a “dual-cockpit architecture” that organizes the cabin into four comfortable, spacious zones. A central console extends rearward, giving each passenger a sense of privacy that is enhanced by sumptuous wrap-around seats suitable for larger frames. The panoramic roof (a $20,249 option) gives an open-air feeling with a black, transparent fixed glass expanse that reflects sun in summer and retains heat in winter. Ergonomics are Ferrari at its best. The navigation, music and 10.25-inch touchscreen are some of the simplest to use yet the best in the business. The front passenger won’t feel left out—he has his own dash-mounted 8.8-inch display (a $5,906 option). The climate control system deserves mention too, delivering instant, ice-cold air through vents that swivel like giant chameleon eyeballs and are 25 percent more quiet than its predecessor. 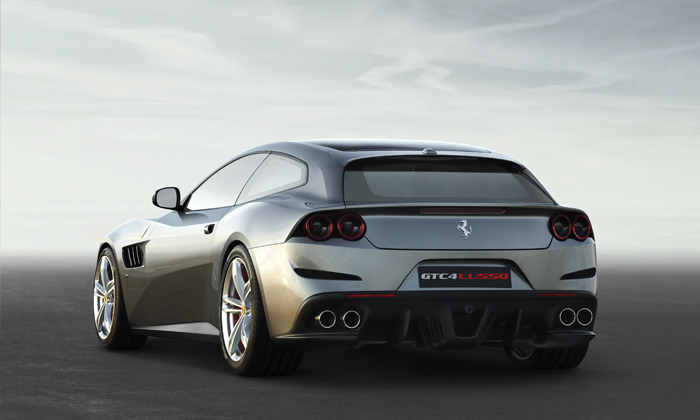 Unless its driver wishes to sedate the steering wheel’s manettino dial to “comfort,” the Lusso does not lull. In sport mode, the GT shakes off its smoking jacket and reveals its athletic prowess, delivering V-12 performance with state-of-the-art Ferrari engineering. Like the FF before it, all four corners of the Lusso are driven at the same time. The 4RM-S all-wheel drive is a precision system that distributes torque to front and rear axles with a rear-weight bias of 53 percent, optimizing traction. Enhancing this long car’s handling is rear-wheel steering, which makes it more agile in corners, reduces steering effort and makes it easier to negotiate parking.

Magnaride dampers are standard fare on Ferraris. This electromagnetic suspension (in a double-link front/multi-link rear configuration) provides instantaneous response to road surfaces that performs capably regardless of the weather. The Lusso delivers extreme levels of performance with competence and grace under power and when pushed. At 3,946 pounds dry, it feels substantial but is never unwieldy. Spooling the engine up to redline is an exhilarating cocktail of forceful thrust, ripping sound and the flash of landscape rushing by. The Lusso is a GT car to covet and one to never let go of.