Daniel Humm created this dish two years ago. Nearly 25 years—and 8,500 miles—in the making, it was the culmination of a quest to perfect simplicity that had stretched nearly Humm’s entire professional life. “I always wanted to cook in this simple, minimal way. But I was never able to do it because I was not mature enough yet,” he said. “But I created this one dish that for the first time in my life, I felt like I did it.”

Using this dish as a keystone, Humm created efficacious principles that are now the guiding doctrine for his cuisine, one that has elevated him to the top of his profession. In April, his Manhattan restaurant Eleven Madison Park earned the top spot on the World’s 50 Best Restaurants list. For most, a culmination. For Humm, a starting point.

“For the first time in my life, I feel as a chef, I really found myself. It’s like learning a new language that now we can use. In a way I feel at the very beginning.” 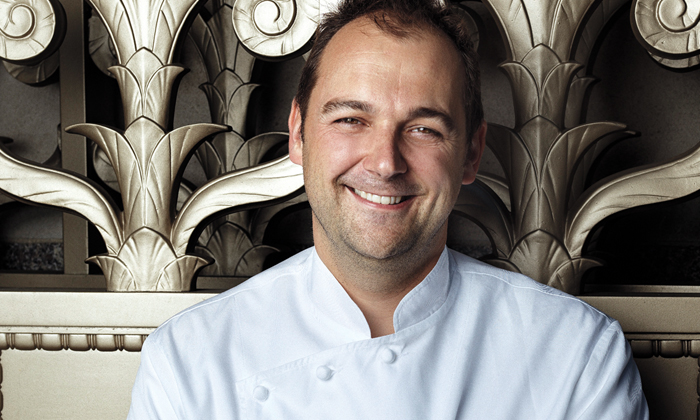 The next chapter brings him to Long Island.

Daniel Humm was never supposed to be here—not at the apex of the culinary world, not even in a kitchen. As a teenager, he dropped out of school in his native Switzerland in hopes of becoming a professional cyclist. His father insisted he get a job to support himself. “At 14, the only place to find a job was in the kitchen. I was very lucky that the place I went to work, the chef there took a big interest in me and he said, ‘I know you’re here just for a paycheck but I don’t want this to be a waste of time, so I’m going to teach you.’ He started teaching me how to make a mayonnaise and a vinaigrette and how to butcher a chicken and all these things.”

Humm changed his career path and by age 25 was prepared for the next step in his culinary progression: a move stateside. “I had this opportunity to go to San Francisco. I felt like it would be nice to have a change and discover the world somehow.”

In California, Humm found himself stymied by the mindset that plagues many creative neophytes: more is more. “I always felt like the dish wasn’t complete. It needs another purée, another sauce, another crispy element, another technique. In some ways maybe, as a young chef, that was important for people to pay attention to what we were doing.”

Indeed, if his cooking methods didn’t truly satisfy him, it did wonders for his career. Within two years of leaving Switzerland and becoming the executive chef at San Francisco’s Taj Campton Place, Humm was named one of Food & Wine’s Best New Chefs and was twice nominated by the James Beard Foundation as Rising Star Chef of the Year.

Maybe most importantly, his work also caught the eye of famed New York restaurateur Danny Meyer, who was looking for a new chef to helm his prized eatery, Eleven Madison Park. “[Humm] was cooking with this just incredibly advanced technique and imagination, but not at the sacrifice of flavor or soul,” Meyer told The New Yorker. 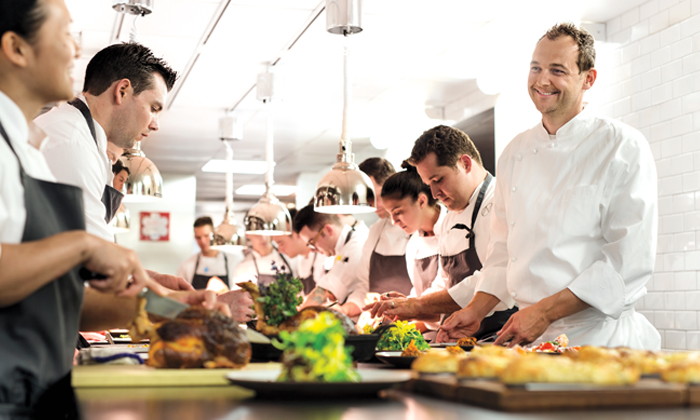 Humm is quick to acknowledge the role of his staff in his success. His entire 120-member crew will be joining him in the Hamptons this summer.

Humm took the job. After all, New York was the place he wanted to be. “The first time I visited New York I knew that I wanted to make New York my home.” High ratings and critical acclaim quickly followed: three Michelin stars, four stars from The New York Times and two James Beard Foundation Awards (Outstanding Chef and Best Chef: New York City).

Even so, he never felt like he hit his mark dead center, never truly created his perfect simplicity. To do that, he needed to go back to his start.

Humm has aged 25 years and traveled nearly 8,500 miles during his culinary odyssey to arrive where he is, but he is still his parents’ son, the product of an architect and a homemaker. His mother frequented the local market and made her own bread, blanketing Humm’s youth in a whirl of flour and fresh produce. “I grew up in a house where everything is organic. She bakes her own breads, she buys all the ingredients from the farm stand…I didn’t love cooking when I was young but somehow without even realizing, I started to have a palate for these things.”

Humm now and always is the product of his creators, evidenced by his creations: immaculately designed, otherworldly dishes composed of local, fresh, pristine ingredients.

Just as Mies van der Rohe’s designs were to architecture and Ryman’s paintings were to art, Humm’s dishes are the paragon of culinary minimalism. He eschews the superfluous in favor of presenting the true essence of each ingredient. And it was only recently that he feels he perfected it with the aforementioned celery root braised in pig’s bladder with black truffle. This dish embodied what became Humm’s four fundamentals: beautiful, creative, intentional and delicious. “I really thought about the dish and I’m like, ‘Okay, what does the dish do? And if we can repeat that, then I think we’re on a good track.’ The dish was delicious, the dish was beautiful, the dish was creative and the dish had purpose. Then we defined what beautiful means to us and what delicious means and what creative means and what intentional means.”

Humm and his team have created more than 100 dishes with this philosophy in the past two years. It has helped them climb to where they are now: owners of the best restaurant in the world, but a restaurant without a home. Eleven Madison Park closed for the summer for renovations mere months after being bestowed the title. Humm and his 120-member staff choose to do as the New Yorkers do. “In the beginning we were thinking about maybe going to Switzerland or other places. But then after all, we said, ‘If we are this New York restaurant, what do New Yorkers do in the summer? They go out East.’ We felt like that would be the right move.”

Humm’s new East Hampton pop-up restaurant, EMP Summer House, will be open through Labor Day. Though the chef’s philosophy remains firmly in place, the Summer House is a stark contrast from its mothership. Instead of a $300 tasting menu, guests are offered a more casual dining experience with an à la carte menu featuring items such as prawn salad, poached lobster and fluke ceviche. “We create restaurants that we want to go to,” said Humm, who also owns Manhattan eateries The NoMad and the newly opened Made Nice. “All of our restaurants, we always ask ourselves, ‘What do we want out of that restaurant?’ In the Hamptons, what we want is not an eight-course tasting menu. When we’re in the Hamptons, we want to have great food that has a focus on the local ingredients but also that’s fun and easy and not such a commitment. That’s the restaurant we are creating.”