Market Art + Design returned to the Hamptons for a seventh year Thursday with Preview benefitting Parrish Art Museum. Alluring pieces of modern works transformed The Bridgehampton Museum into a chic and stylish art mecca large enough to accommodate nearly 70 exhibits. The fair, which runs through Sunday and is put on by Market Art Productions, showcases wide-range of messages and mediums. There are minimalist, feminist pieces and imaginative paintings with dark tones to summer-y, calming colors and interactive art. Six caught the eyes of many VIPs opening night of Market Art + Design 2017. 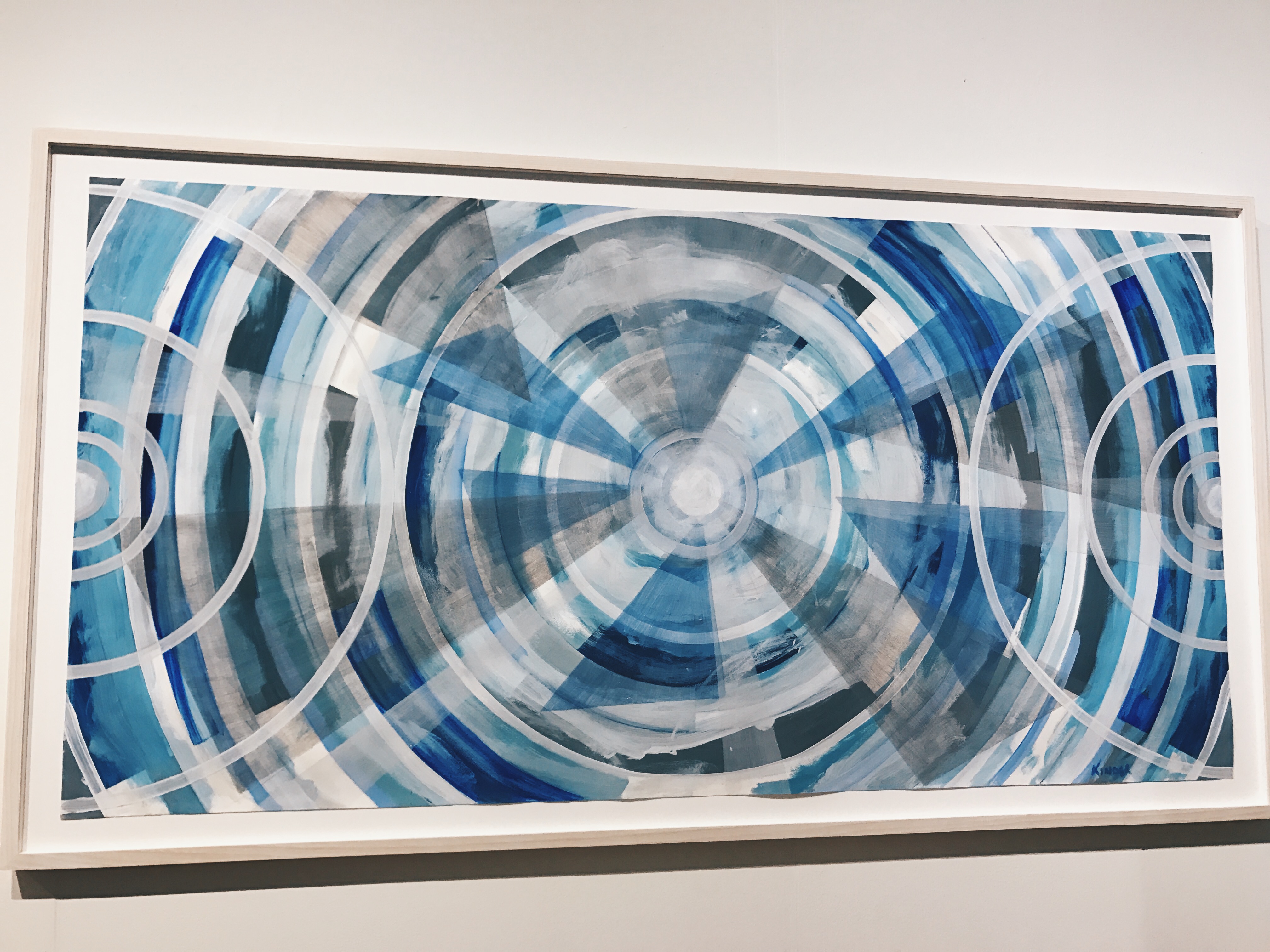 At the George Billis Gallery’s collection, art lovers will notice an overlying theme: the color blue. “Blue is summer,” exhibitor George Billis said. “Blue beaches, blue Hamptons. We wanted to display the calmness, the serenity and the realism that blue incompasses.” Out of all the pieces in the collection, Billis said he is most excited about displaying is the work of artist Steven Kinder. “Kinder’s pieces have a lot of action,” Billis said. This action is then counteracted by the subdued colors, making the piece incredibly compelling. Although WOP 24-17 may appear to be abstracted, it is actually figurative and representational. “[This work] is inspired by blue stones,” Billis said. 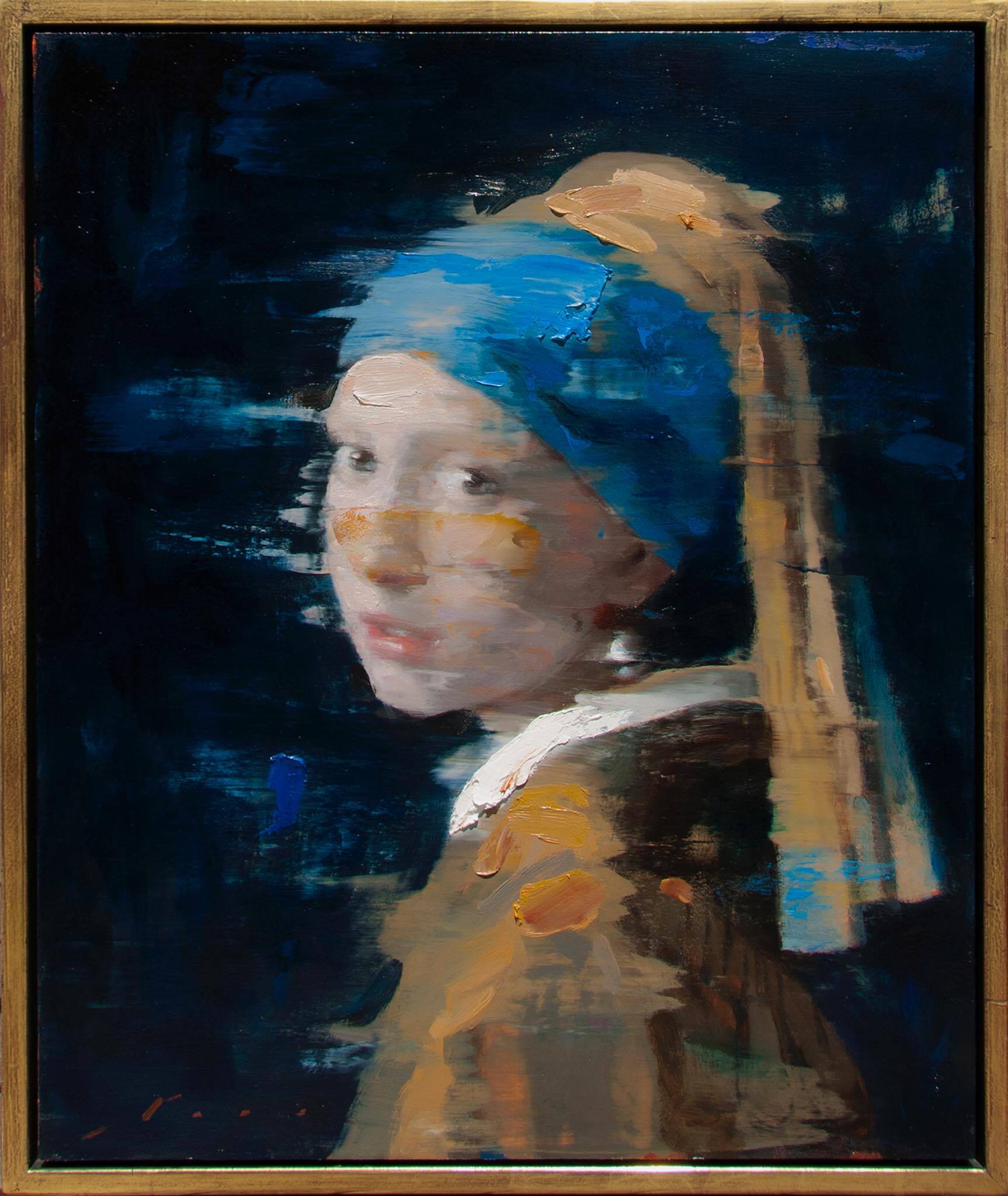 The Haven Gallery’s dark and edgy collection is brought together by its “aesthetic,” said exhibitor Joseph Weinreb. Weinreb described the pieces as “figurative, surreal pop,” while exhibitor Erica Berkowitz called it “imaginative realism.” The pieces in this collection took aspects (or even entire figures) from classical artworks and then reimagined it, resulting in a new, creative and whimsical work. Vincent Xeus’ “Breath,” for instance, is a reinterpreted version of Johannes Vermeer’s “Girl with a Pearl Earring.” 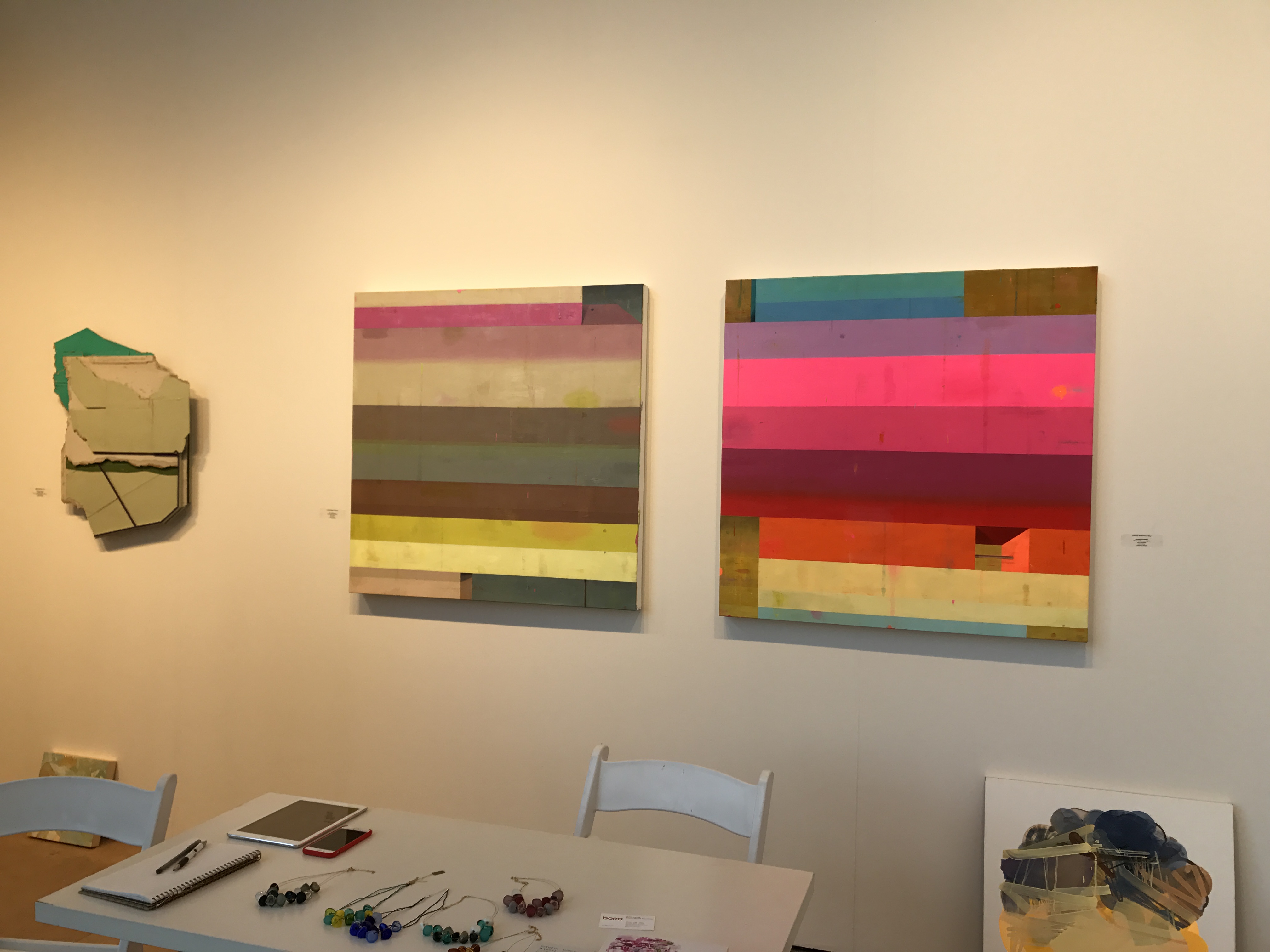 When asked to describe her collection in one word, Kathryn Markel said “painterly.” Although other collections may be about what’s depicted on the picture plane, Markel is focused on what creates it– the materials. “It’s all about paint,” Markel said. “Paint interests me.” In almost a fauvist style, the bright colors of Zlotsky’s work become the centerpiece and draw one in. Markel said she was excited that her collection displayed new, upcoming artists, such as Zlotsky and Yolanda Sánchez. Sánchez’s work is not only colorful but rooted in nature, depicting in a seemingly abstract style flower gardens. 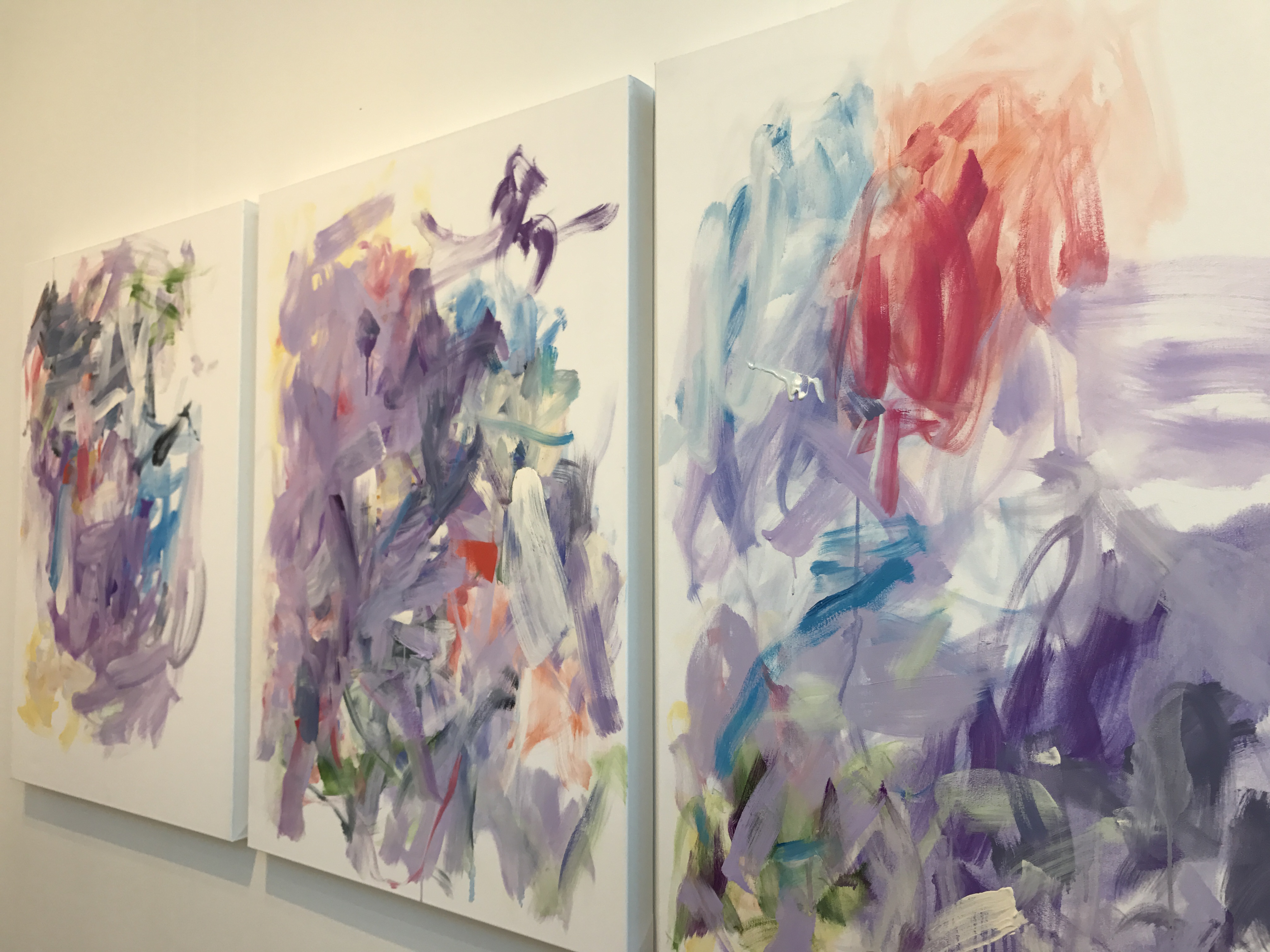 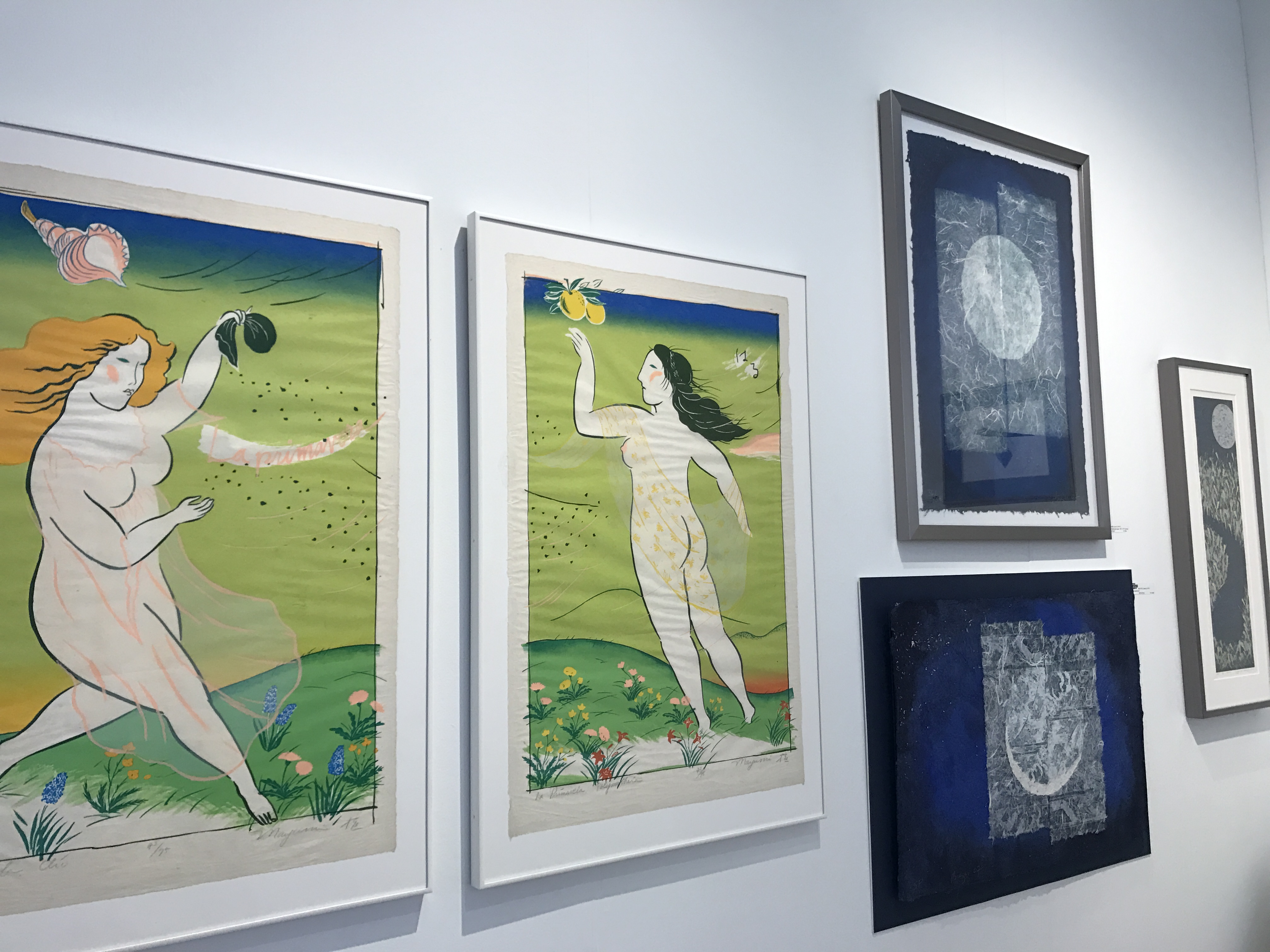 Allison Tolman is a second-generation art dealer, having grown up in Japan with art dealer parents. Now, Tolman is dedicated to bringing Japanese art to New York, displaying her strictly Asian art collection. “I’m inspired by Asian art,” Tolman said. “It’s soothing and calm.” Tolman described many of the works in her collection as “summer-y and happy,” with bright, warm tones and playful designs and figures. However, one painting in her collection stands out for its linear composition and dark hues. “Departure,” painted in 2003, was created by the oldest artist featured at Market Art + Design. Born in 1913, Toko Shinoda is 104 and still working today. 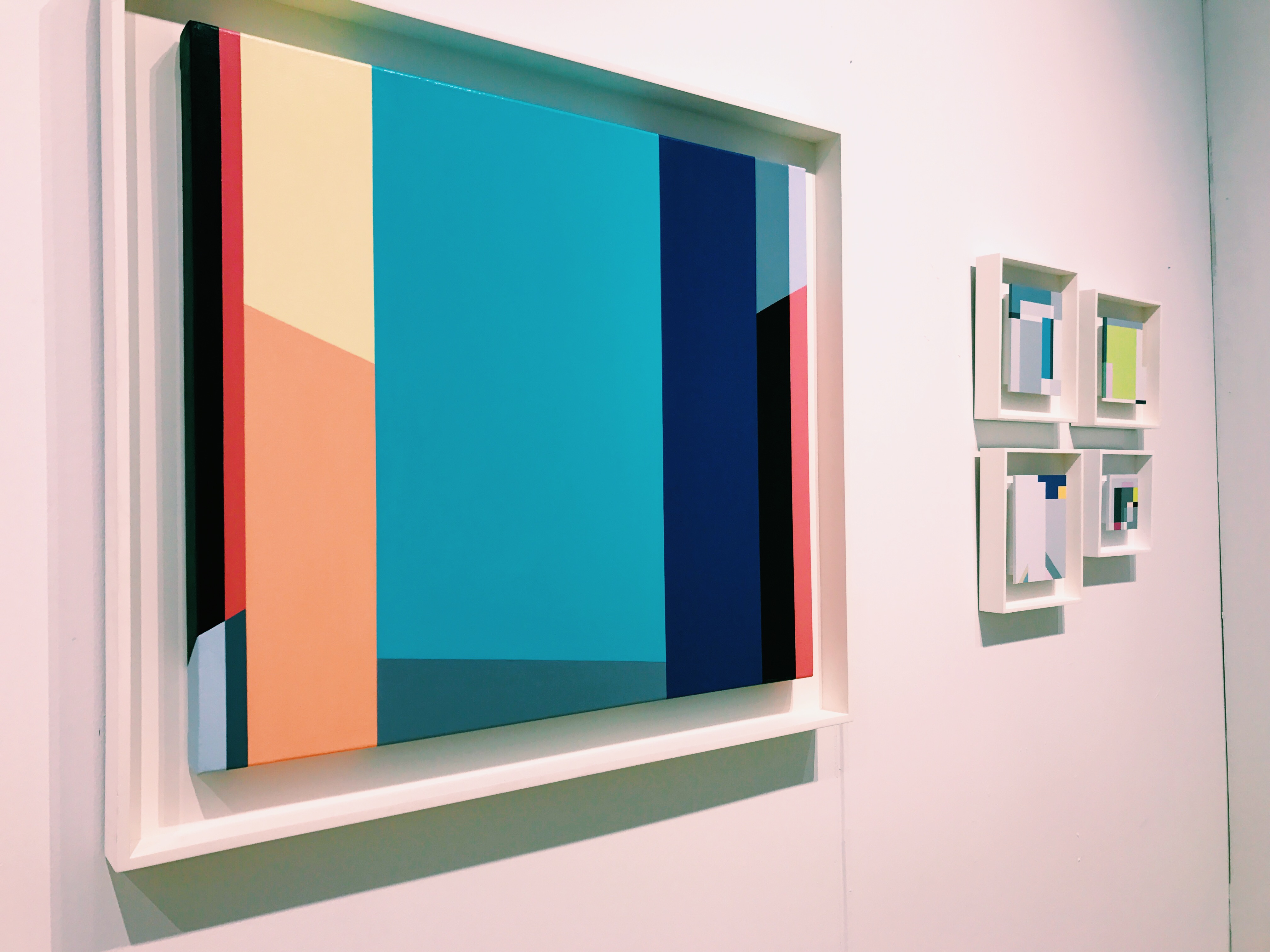 Described by her daughter Hannah Seligson as “a cross between Mondrian and Albers,” Judith Seligson’s work is all about shapes and intervals. “It’s intimate geometry,” Judith said. “I love different sizes and the very intense connection each shape draws. There’s something that just grabs me about shapes and the intervals between them.” Having worked as an artist for more than 40 years, Judith has seen firsthand how masculine the art world can be. “When I first started working, so much of the art world was male. Only 10 percent were women, and there was this macho thing of being bigger. Most artists are still priced by size,” Judith said, gesturing to her smaller-sized works. “So, this was my response.” In both a feminist and artistic statement, Judith creates small, intimate works to show that size truly does not matter. “I’m saying through the paintings that it has nothing to do with size,” Judith said. “Big paintings will come and go. What matters is the intervals inside them.” 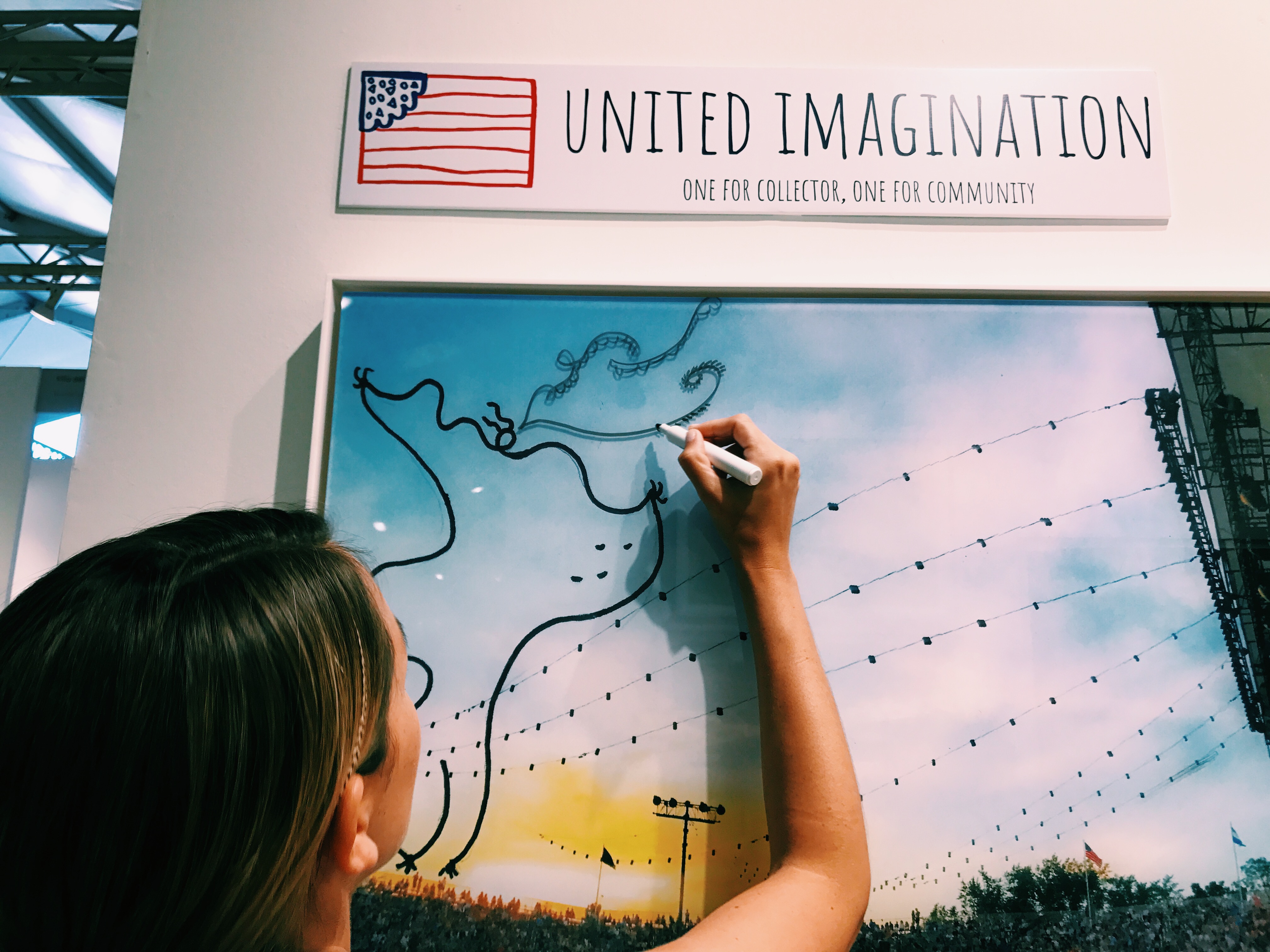 It’s not exactly common for an artist to invite you to draw on their work, but Adam Jonah isn’t your typical artist. At just 18 years old (making him the youngest artist at Market Art + Design), the recent high school graduate’s interactive art allows visitors to not only view but be a part of his art. After taking a picture at a local place on Long Island, Jonah draws a creature from his imagination onto the image. He then allows others to do the same by using expo markers to draw their own creature. “Everyone is an artist,” Jonah said. “I’m really tapping into my inner child.” Not only is Jonah an artist, but he is also a “community organizer,” said exhibitor Zoe Manzes. Jonah has created a project called United Imagination, in which for each installation purchased, another is donated to children’s centers, hospitals, libraries, schools and other community centers. “I’m using creative expression as a method of healing,” Jonah said.