Shortly after his Imperial Hotel in Tokyo was completed in 1923, Frank Lloyd Wright published a book with photographs and plans of the lodge. Though it was demolished in 1963, the building has made a resurgence as the centerpiece for a major exhibit at the Museum of Modern Art.

For the retrospective “Frank Lloyd Wright at 150: Unpacking the Archive,” several scholars were invited to select key objects among 500,000 artifacts. They examine, interpret and explain their findings in short videos that accompany the show’s 12 separate sections.

In the section marked Reframing the Imperial Hotel, Ken Oshima, an architectural professor at the University of Washington, selected and studied Wright’s book. He discovered that the visionary architect used materials and objects—stone, furniture and china—with east and west elements that, arranged together, offered guests an international experience. This composition speaks to one of Wright’s core architectural principles: that a building’s details should serve to integrate harmoniously with the whole.

The focus of the adjoining Ornament room is Wright’s use of decorative details as an indispensable integrative force that his modernist contemporaries mostly nixed. Examining plans for Wright’s Midway Gardens in Chicago, Princeton Professor Spyros Papapetros observes that Wright employed ornament in everything from the entertainment facility’s facade to its cutlery. Circles were used throughout the building, including a mural to represent bubbles of sparkling drinks. In many of his projects, the costs for ornament represents the majority of expenses.

“One of the qualities of what Frank Lloyd Wright calls organic ornament—that is an ornament that holds the building together, that has an integral quality and brings all the elements together—is that in fact it’s very hard to extract anything from that scheme,” Papapetros said. “So it makes these costs for things that might seem marginal or secondary absolutely essential and very hard to extract from the project.” 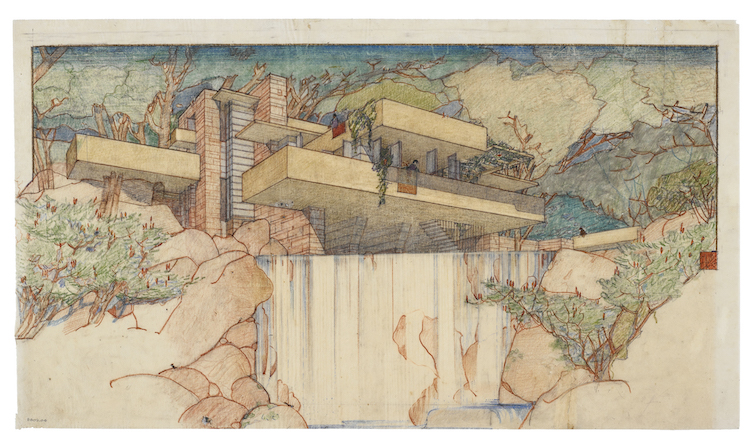 The show celebrates the sesquicentennial of Wright’s birth and the joint acquisition of the Frank Lloyd Wright Foundation archive by MoMA and Columbia University in 2012. The more than 400 drawings, photographs and documents spread across the rooms highlight Wright’s work in various areas, from urban development to education to farming. A unifying theme among the sections, though, appears missing.

The key to understanding the show is the 14 short films of many younger specialists, Curator Barry Bergdoll said. Some touch on topics of history, industrialization, environment, race and class, while introducing each section’s theme. As exhibit-goers travel through each space, “many relationships…start to emerge,” Bergdoll said. The great value of an exhibit of this broad scope is that it allows visitors to more readily identify the cross-pollination of Wright’s ideas in his multifaceted work of more than 1,000 designs that spanned seven decades.

Take the Circular Geometrics room. It reveals that Wright used circles not only in ornament, but they also played a foundational role in his large-scale experimental projects such as neighborhood design.

“The most interesting aspect of the work that I’m doing…is the incorporation of movement [in the drawing],” Desmond explained. “It’s the presence of movement and the changing perspective in his conception of a place or an object, and the relationship of that changing perception to the landscape—how it helps you understand the landscape that you’re in and the role of the object within it.” 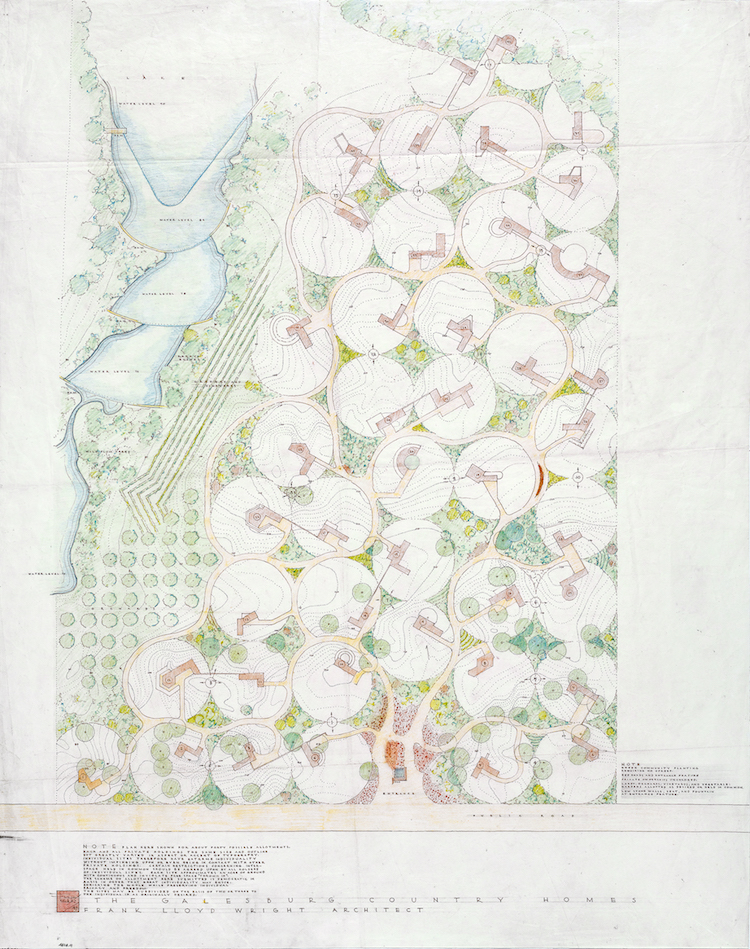 The room also displays site plans for another unrealized suburb, Cloverleaf Housing in Massachusetts. It similarly involved circular lots, each with four homes that together resembled a geometric four-leaf clover pattern with curving roadways.

These designs express Wright’s vision that his homes and buildings should blend with their surrounding environments, a principle underscored in the Ecologies and Landscapes room that emphasizes the premium he put on landscape architecture. Here, a key object is an experimental planting plan for his Darwin Martin House in Buffalo. It reveals that Wright combined native prairie plants, such as asters and hawthorns, with non-indigenous Asian flora that include oriental poppies and Japanese lilies. The approach calls to mind Wright’s design that united east and west at the Imperial Hotel.

Plants also appear in his ornamentation through depictions of hollyhock, sumac and other species in stained glass, lighting fixtures and copper friezes. Of course, Wright reached the pinnacle in executing his principle to make building and environment appear as one with Fallingwater, his masterfully designed home constructed over a waterfall in the backwoods of Pennsylvania. 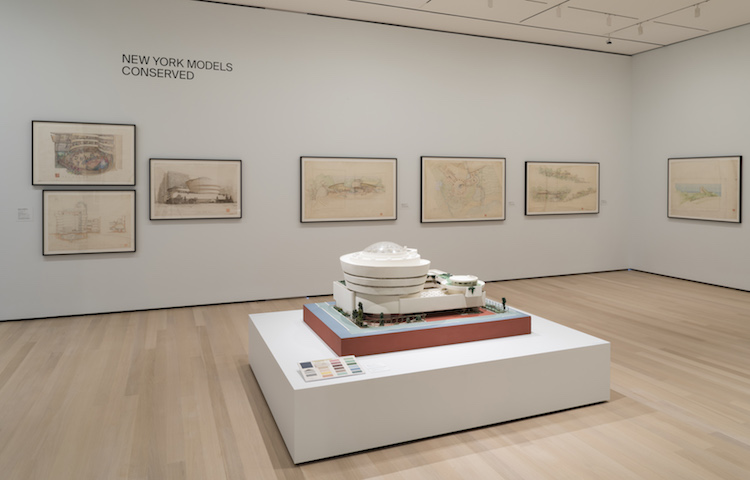 A colorful, Japanese-like rendering of Fallingwater and several other aesthetic drawings of major projects (the Johnson Wax Administration Building among them) in the show’s central room are works of art in themselves and an exhibit highlight.

Another is an eight-foot drawing of Wright’s non-commissioned and unbuilt Mile-High skyscraper that features outlines of the Empire State Building, Eiffel Tower and other monumental structures to compare its scale. There’s also a list of architects and engineers he admired and placed himself among, including his mentor Louis Sullivan. Restored models of the Guggenheim Museum and the never-built St. Mark’s Tower, as well as footage of Wright’s television appearances, are also present.

Although disjointed, “Frank Lloyd Wright at 150” ultimately serves as an exceptional entrée to the breadth and depth of the innovative architect’s defining qualities: his independence and originality of thought.