Every morning in July, Grey’s Anatomy star Kelly McCreary has awoken to views of a beautiful cove and occasional trespassing deer on her lawn. It comes with the territory as she plays Esther Mills in Bay Street Theater’s production of Intimate Apparel written by two-time Pulitzer Prize-winning playwright Lynn Nottage. A long way from the hustle and bustle of Los Angeles, McCreary is embracing the nature surrounding her in Sag Harbor. “It just makes you feel really connected to this planet and aware of how precious it is and how you want to protect it,” she said. “That’s a good reminder for anybody every day.”

Bay Street Theater is an ideal summer home for the play, as its stage is as intimate as the story. Set in 1905 Manhattan, Intimate Apparel transports the audience into some of the most important bedrooms in seamstress Esther’s life. Behind closed doors, she trades secrets with clients she sews lingerie for. This includes rich white women like Mrs. Van Buren (Julia Motyka) and black prostitutes like Mayme (Shayna Small). Esther’s Christian values often conflict with the other women, but that doesn’t diminish their bond. “She connects very deeply and very openly with the other characters in the play, over and above [the] cultural or economic boundaries that may separate them, and I think I have that in common with her.”

McCreary also admires her character’s talent and drive, though it sometimes creates obstacles. “Because she’s so passionate and driven it actually gets in the way of her being able to see reason in certain moments, but that’s true of all of us.” Esther dreams of opening a beauty salon where black women will get pampered just as much as white women. She lives at Mrs. Dickson’s (Portia) boarding house where she works and saves money to achieve her goal while many of the other women have married and moved on.

At 35, Esther is determined but lonely and longing for love. She begins correspondence with an equally lonesome Caribbean man named George (Edward O’Blenis) with the help of her literate clients. The moment Mrs. Van Buren begins to write the first letter, a series of events is set in motion that sends the seamstress on a journey that would test the strength of even the most indomitable woman. 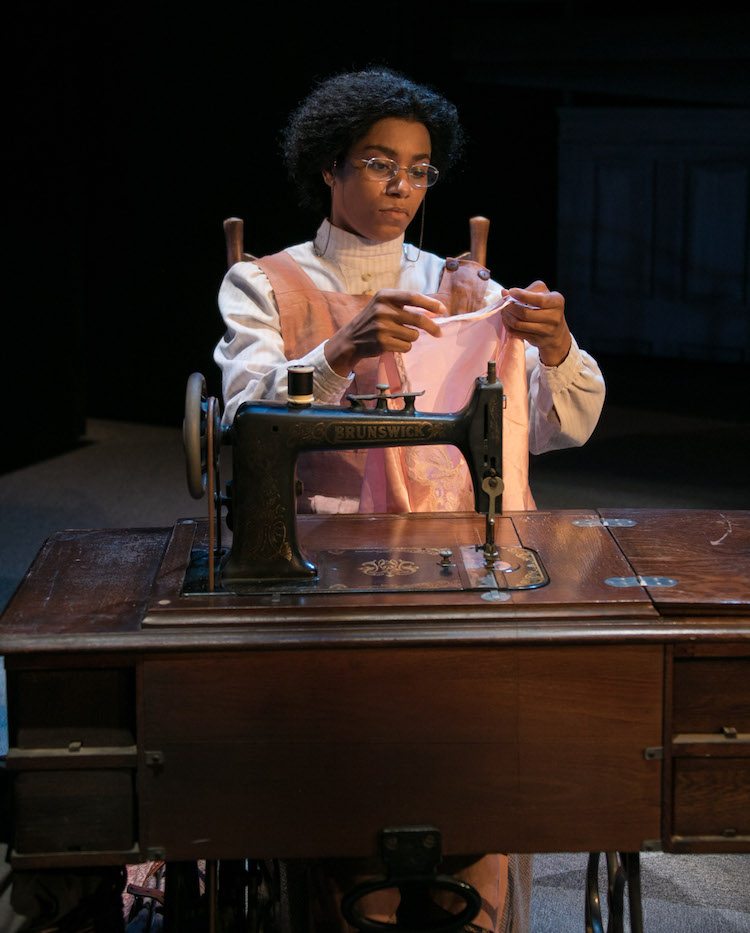 The containment of the Intimate Apparel script allows McCreary to immerse herself in her character in a unique way. “I knew with Esther Mills I wasn’t going to find out in week two of rehearsal that she had a long-lost brother or something like that,” said McCreary, who began her career on New York City stages. During the rehearsal period in Manhattan, she learned everything she could about being a seamstress in New York in the early 1900s. She took sewing classes, learned about different clothing fibers and read up on North Carolina history to create a rich backstory for Esther. That commitment is obvious in her performance as her nuanced portrayal of Esther’s complex emotions is breathtaking to watch live.

McCreary admits she’s had more in common with other roles in her career like her popular Grey’s Anatomy character, Maggie Pierce, but welcomes the challenge of stretching her imagination to play Esther. “I want to play great characters who have interesting histories and passion and drive and that are good and evil and conflicted and all of the things together. I feel capable of taking that on. I feel empowered by this experience in that way.”

When she’s not telling Esther’s story, McCreary enjoys the laid-back lifestyle in Sag Harbor spending time with family and friends who come to see the show. Sampling local cuisine has been another plus with trips to Page and its late-night bar extension Back Page, Wölffer Kitchen, Dopo La Spiagga and The Dock House, whose lobster BLT she’s particularly fond of. It’s also not uncommon for her to meet a fan at the local grocery store or while on a run. “I wish I could say I’d been more adventurous, but it’s been a pretty simple, domestic kind of lifestyle out here.”