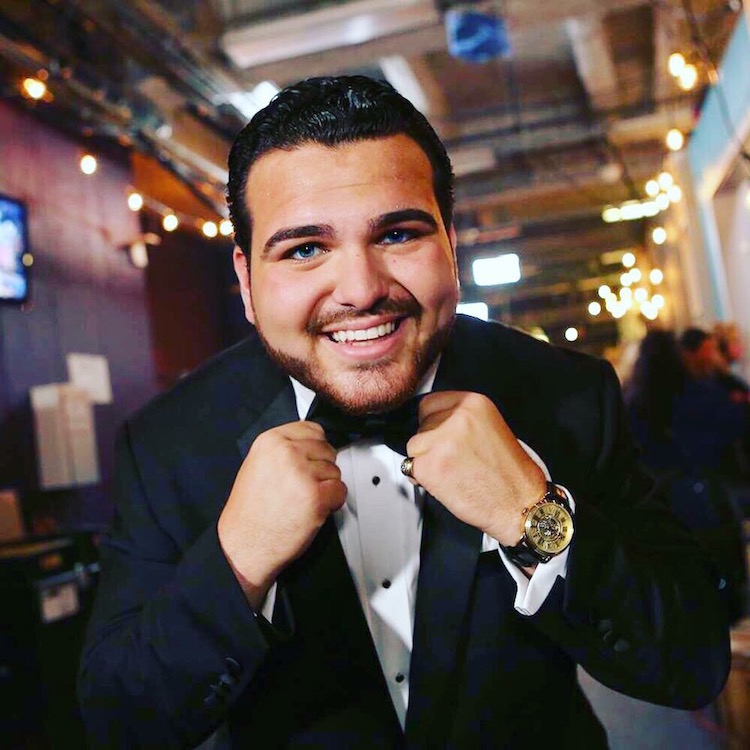 Sal Valentinetti’s life has completely changed since appearing on season 11 of America’s Got Talent.

Gone are the days Sal Valentinetti would deliver pizzas around Long Island. Gone are also the days he’d shop at Roosevelt Field without being recognized. Ever since the Bethpage native showed off his singing chops and unexpected love for jazz on season 11 of America’s Got Talent, his life has been a roller coaster ride.

Yet Valentinetti wasn’t always aware of his talent. It was during a horn lesson at 15 when it was uncovered. The instructor asked him to choose a song to play and Valentinetti started singing the lyrics to a song he used to listen to with his grandmother: Bobby Darin’s “Mack the Knife.” Taken aback, the instructor immediately urged him to get singing lessons. With further encouragement from his beloved Uncle Joe, Valentinetti started to take his skill seriously.

These days, singing is all he does. Valentinetti has been touring all over the nation and selling out shows back home at The Paramount in Huntington and the Patchogue Theatre.

“It’s really been incredible to see the amount of people, especially from Long Island, who have rallied around me,” said Valentinetti, who also released a self-titled EP on July 1. “There’s no place like home.”

Valentinetti, who is gearing up to return to The Paramount on August 3, opened up about life after the show, his gratitude for the past year and what’s next for him.

How has life been difference since the show?
Life has changed tremendously. I’ve been traveling all over the world, singing for many, many different people…I opened up for Jay Leno at the Mirage in Vegas, I got to sing for Regis Philbin out in LA…It’s been a crazy ride this past year.

Looking back now, what was it like being on the show?
To think how much my life has changed in a year, just what 12 months can bring, I feel incredibly blessed. My level of gratitude for life has gone up, certainly through the roof…Looking back, I had no idea what I wanted to do with my life. I was in St. John’s for three years, changing my degree every single year. It’s a tough position to be in, especially for someone whose only been on Earth for two decades and they want you to decide what you want to do for the rest of your life…That moment [on the show] was the moment that my life changed forever. I knew exactly what I wanted to do—performing for people and hearing that crowd roaring…Since then, I’ve learned a lot and one of those things being there’s nothing like doing what you love.

What made you audition for the show?
I was delivering pizzas, that was all I did. And I would make just enough money to put gas in my Cadillac. Delivering pizzas in a Cadillac is the most counterproductive thing you could do…My uncle Joe, who was my best friend…He goes, “Listen, you might want to try out for American Idol.” And I was like, “Yeah, bull sugar. I’m not special enough to sing pop music around on stage.” He said, “Don’t. Be you. Do the Sinatra thing. Do what you love.” I went in there and I did it and they loved it but I only got through to Hollywood. I got home and he said, “This is only the beginning.”

A couple of weeks later he got very sick all of a sudden and he passed away. That was the toughest loss I’ve had since my grandmother. Losing Joe was like losing a mentor…It was a tough year after that. I went back to school…I started singing gigs here and there, I was making a little more money. I never really gave much thought to what he had said then, that I could do this for the rest of my life. I get a phone call almost a year from the day he passed away from America’s Got Talent saying, “Hey we saw your video and we want you to come try out.” And I took it really seriously and it paid off.

Did you also receive memorable advice from any of the judges when you were on the show?
Oh yeah! Simon Cowell came up to me at the end of the show…and he left me with, “Don’t ever change.” And I put my hand on his shoulder and I looked him right in the eye, right into the belly of the beast, and I said, “It got me this far!”…I made my career off of just being me, just being real…Heidi Klum actually really instilled that immediately. The first live performance I did, I did a One Direction song that was reworked as a standard and I was so God damn nervous because I had never done anything like that before…and there would be millions of people watching and I was terrified…Heidi Klum comes out of her dressing room on stage. People are following her putting her makeup on and fixing her hair as she’s walking down the corridor. She comes right for me and she says, “Sal, just do exactly what you did the first time you were on stage and be you because that’s what people want to see.”

Are you planning to release an album with original songs?
We are releasing the EP in order to fund my Christmas album, which will have original Christmas songs on it. We are also coming out with a couple of singles which should be out later this year. We are working hard!

And what can fans expect from this next show at The Paramount?
Just a good time, a really good time. If they’ve been to my shows at The Paramount, it’s a completely different feeling. It’s a lot more relaxed, a lot more fun. In December we were all going through the motions, like we were going to march. We were all so nervous. It was my first shows and they were all sold out—1500 people a night for three nights. I was terrified. Now we’ve gotten so comfortable with being on stage.