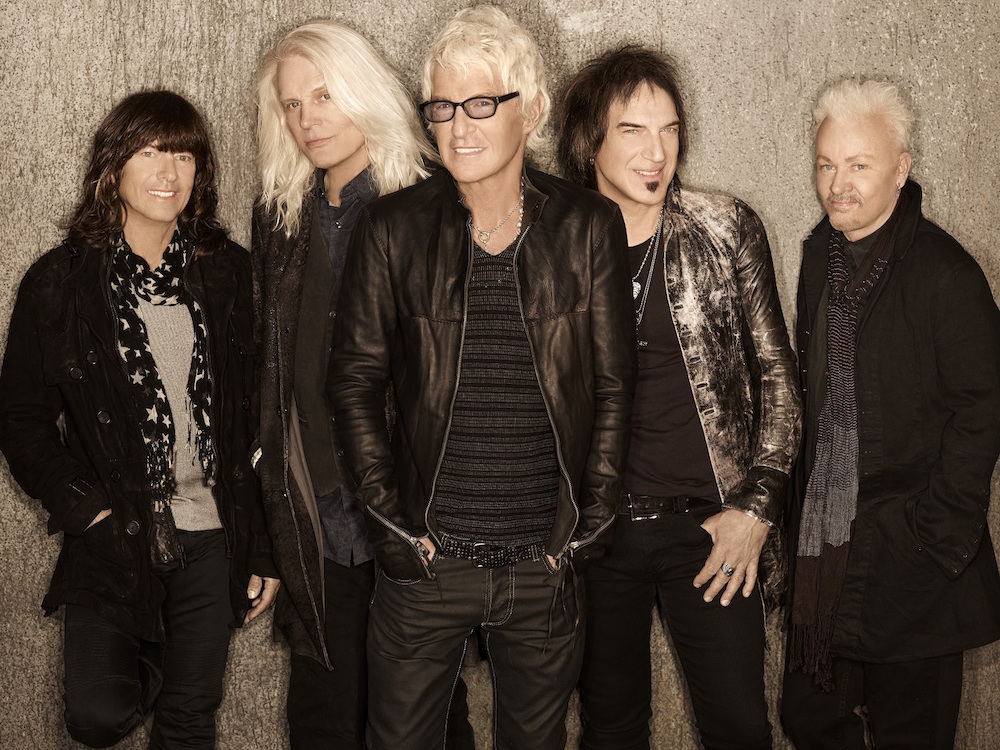 For decades, REO Speedwagon has had an undeniable presence on classic rock radio. And to quote one of their early anthems, the group from Champaign, Illinois has continued to “Roll with the Changes” throughout the years.

First building a following with nonstop touring in the 70s to expanding with pop hits during the early 80s—the No. 1 “Keep on Loving You,” the No. 5 “Take It on the Run” and the No. 7 “Keep the Fire Burnin’.” The group, which successfully made the transition to the MTV age with another No. 1, “Can’t Fight This Feeling,” remains a strong concert draw to this day.

This summer, REO will hit the tour trail again with old pals Styx and former Eagles guitarist Don Felder on the bill. That will include a stop at Jones Beach Theater on Aug. 16. REO’s singer/pianist/guitarist, Kevin Cronin, spoke with me about the group’s long and winding career.

I’ve heard that early in the band’s career, there was difficulty breaking through on the East Coast.
A lot of times, we think of ourselves as a “Midwest band,” and it took us a long time to breakthrough on the East Coast and the West Coast. Back in the early 70s, the record business, radio business and music business were so different. It really was much more localized and regionalized. We were doing really well; radio stations in the Midwest were playing our records and we were one of the top bands in the region. The way it worked back in those days was a major band would go on tour, and as they toured around the country, they would pick up a support act from that region.

Can you give some examples?
If Aerosmith was going to go on tour once they broke on a national level, when they played in the southeast, Lynyrd Skynyrd would support them. When they got over to Texas, they’d pick up ZZ Top. And when they got to the Midwest, they’d pick up REO Speedwagon. So, it was that type of thing where you wouldn’t get a chance to tour outside of your “comfort zone.” Bands became known as regional acts.

How did REO eventually have a breakthrough?
We did it the old-fashioned way. We were in Champaign, Illinois and we just kept extending our perimeter. In 1981, we headlined Madison Square Garden and sold out the show. I remember it was such a fulfilling experience, just for me personally. I felt like, “OK. You sell out Madison Square Garden, you can’t just call us a ‘regional band’ anymore.”

It seems like over the past 10 years, the band’s popularity has picked up once again.
Right around the late 80s/early 90s Kurt Cobain burst onto the scene. Then so many other great, young rock bands—Pearl Jam, Soundgarden, Alice in Chains—really just broke the mold. There was a feeling that bands such as ourselves, and a lot of bands that we came up through the ranks with, were outdated. A lot of bands just broke up or stopped touring. But REO Speedwagon, we never stopped. We just liked to play. That was our thing: we played live. We kept going. We have been around for a long time, and we have ridden the roller coaster, where we’ve been high and low and everywhere in between.

But we did get a sense over the past…more like it’s been the last 20 years, that you just feel it. You feel a resurgence and you feel like more people are coming out to see us. I think we upped our game. I think we revitalized ourselves from the inside out, and we realized it was better to partner up with another band or two, and tour together. And it took it a little ego adjustment because when you’re used to headlining Madison Square Garden, now you’re going to come back and co-headline, you’ve got to deal with that.

At the upcoming show at Jones Beach, Styx and Don Felder are also on the bill.
These guys [in Styx] are our best buddies in rock. They also are such a good live band that our bands have an effect on one another; we bring the best out of each other and that’s a nice thing. It’s a healthy competition that goes on. Don Felder, “special guest” is how he’s billed, but it makes perfect sense, because it is a real special treat to hear Felder. His playing is so effortless, and you watch the way he handles the instrument…it’s like if you’re watching Roger Federer hit a tennis ball or Jordan Spieth hit a golf ball. When a guy is a real master of his craft, it’s just something special to watch and listen to.