Hours after showing a house at the top of a private road in Dix Hills, Rich Kruse trekked to the Intrepid Museum in Manhattan for an evening out with his wife and his daughter. There on the deck of the aircraft carrier with the city skyline in view, the trio watched a screening of Back to the Future as part of the museum’s free summer movie series. But seconds before the movie started, Kruse was locked in on his phone dealing with real estate.

“My wife said, ‘Only you—negotiating a real estate deal while on an aircraft carrier watching Back to the Future,” Kruse said.

Kruse, who has worked with Douglas Elliman full-time for more than two years, credits his strong networking skills with his success in selling properties throughout Suffolk and Nassau County. Recently he and his business partner John Magnano have sold homes in Rockville Centre, West Babylon and Eatons Neck. They notably just snagged their biggest residential listing yet in Lloyd Harbor. The almost 3-acre home sits on a cliff overlooking the Long Island Sound and is selling for $5.5 million. The Deer Park resident joked that he now works “eight days a week.”

Kruse, who moved to Deer Park from the Bronx when he was 16, offered his real estate expertise and revealed the areas Long Islanders should be paying attention to. 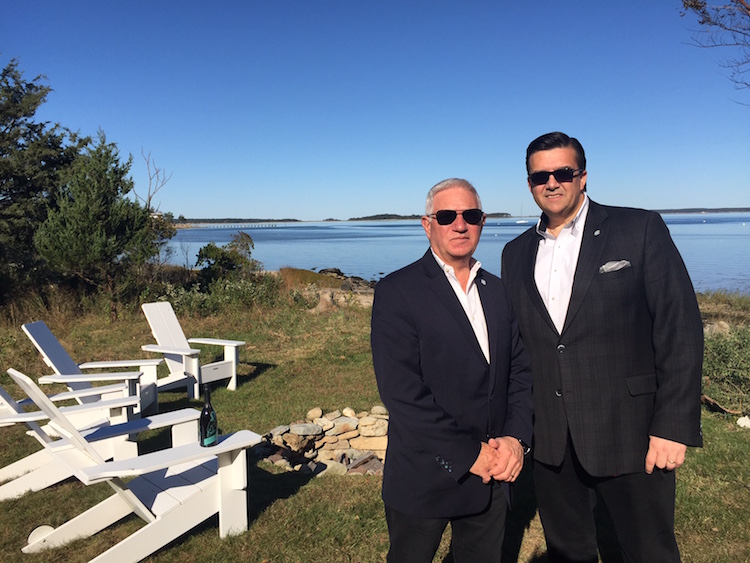 Why did you decide to get into real estate?
I had been doing PR and marketing for many many years, mostly independently—I’ve worked for everybody from startup tech companies to the New York Islanders…But everybody wants to talk about real estate. No matter what kind of business deal or opportunity, real estate would always come up in a conversation…And I had known [our CEO] Dottie Herman for a long time through the business world. I was pushing out Douglas Elliman real estate information to the business community and Dottie’s accounts. After a while she was like, “Why don’t you just get your license?”…And the rest is history.

Do you notice any common mistakes people make when selling their home?
The problem is that almost every house, it needs to be in showing condition before we can list the house and have an open house. We tell people right away, “John and I are going to say things that you aren’t going to like about your house but we’re doing this to get your house sold as quick as possible and get you the most money.”

We [tell them] to depersonalize, declutter, get rid of all the chachkies. You have to clean out the basement that you put stuff in for the past 40 years…That is a big mistake—they don’t clean out their house and put it in showing condition as well as they should…It will take you a few weeks and time and effort to get rid of this stuff, vacuum and dust and make it look pretty and maybe buy some new plants and maybe paint. Your time and effort may cost you maybe $1,000 to $5,000. But let’s say your house is listed at $500,000 [and you don’t make the changes], buyers see all this stuff and they like your house, they will ask to take off $50,000.

Have there been cases where people have to repaint their house before selling?
Oh yes! We will come and we look around and they will say, “Isn’t it cool the way we have different paint color in every bedroom and every hallway?” John and I look at each other and say, “Yeah, it’s very cool but you got to change it!” [Laughs]…Cool and nice doesn’t sell your house…You need to paint it a light grey or a linen.

What about the mistakes buyers make?
A big thing is they make too quick of a decision sometimes…On the buyer’s side, it’s like love at first sight. But love at first sight in a home or a building is a little different than in a human relationship…You have to look under everything. And a lot of people they buy it and all of a sudden they are in contract and then they get the engineer’s report and they go, “Oh my goodness!”

Just don’t look if there’s a fresh coat of paint or they sanded the living room floor or they cleaned all the kitchens. You have to delve in. There’s always once in a while where it works out but we tell people to take their time. A lot of people jump the gun and they just see the outside pieces of the property and they don’t really go under the covers and you need to.

What do you recommend buyers do?
We do a private appointment first and I tell people to take notes…It’s important because things add up.

Are there any trends on Long Island that people should know about?
We are getting a lot of people in villages. That is a big thing now and this has been happening even more so now in the past year. People want to live, especially millennials, whether they are single or married or engaged [in villages like] Port Washington, Great Neck, Huntington, Port Jefferson. Then on the other side there’s Sayville, Babylon, Rockville Centre. The reason why all these people love the villages is that they want to live close to the restaurants and bars and the train stations—even though the trains are an absolute nightmare…so they can walk from their house to either take the train and/or go to dinner on a Friday or Saturday night.

Whenever you get that rare time off, where do you like to go out on Long Island?
My wife and I like to go to the vineyards…But two weeks ago, I had to go out and do a walk through to look at a house out in the Hamptons…I told my wife, “Why don’t you come out East with me since you’re home today?”…We checked out a house, walked around Southampton, grabbed an ice cream cone and by that time it was approaching dinnertime. Like everyone on Long Island you want to be on the water having dinner in the summer. Instead of staying in Southampton, we drove to East Quogue…We went to Dockers. It’s phenomenal. It has a deck and it’s right on the water…and right next to it you can take out kayaks…We also love going to all these villages, hit the shops, walk around and grab an ice cream cone or dinner. My wife being an ER nurse and me a real estate guy, we are on the run constantly, so when we have a little bit of down time we really like to relax.