How do you capture a city as complex and multifaceted as New York in approximately 140 works of art? The answer can be found at the Nassau County Museum of Art’s aptly titled new exhibition, “New York, New York.”

The exhibition, which opened July 22 and runs through Nov. 5, showcases works from the 20th and 21st centuries by notable artists including John Sloan and Georgia O’Keeffe. Works from various mediums blend together to represent all that makes New York a glamorous, gritty, busy and beautiful city that is constantly changing, yet remains the same.

The visionary behind this exhibition is the museum’s director emerita Constance Schwartz, who served as the institution’s director for more than 20 years. “Although I live in Long Island and I love everything that the Island has to offer, I think that half my life, maybe more so, is in New York City,” Schwartz said. Her deep appreciation for New York, in particular the constant engagement between the people and the landscapes, was the driving force behind the exhibition.

As visitors move through the nine galleries of “New York, New York,” a common thread appears in the works. Even though many of the images are of a bygone era, it’s hard to escape the timeless quality. The dressing and buildings may have slightly changed through the years, but the way in which New Yorkers engage with the city does not. This is understood through John Sloan’s 1918 oil Bleecker Street, Saturday Night, which depicts New Yorkers actively interacting with the street on a Saturday evening. The same goes for Rebecca Lepkoff’s 1950 print Washington Square Park showing the arch in the background and commoners on the move in front of it, as well as in Harold Roth’s 1946 print Flatiron Building.

“People are fairly dressed up and what are they doing? They’re wandering the street looking into food stores,” Schwartz said. “What’s interesting was that that society was living on the streets…That’s where all the social discourse was…it was community in the street.” 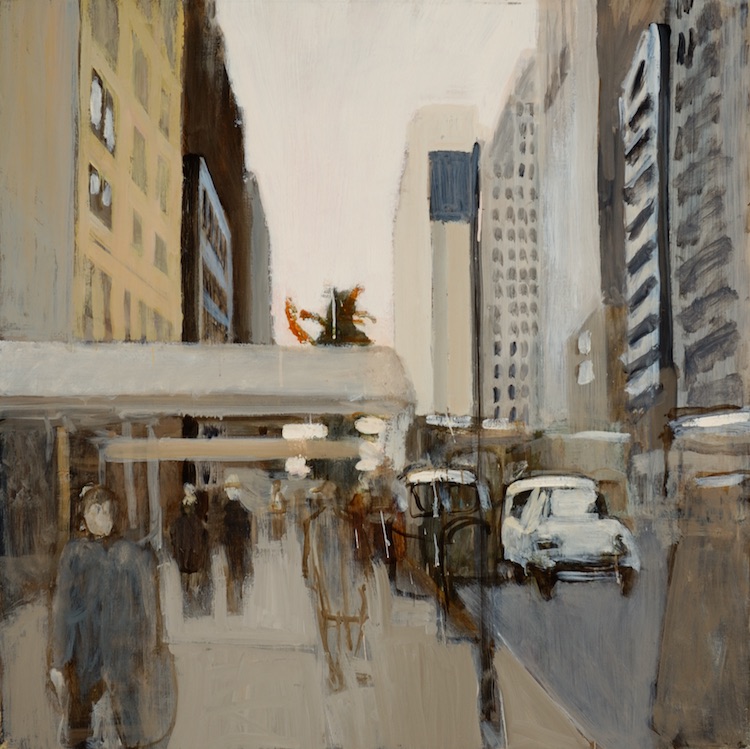 Immigration is another significant theme explored. “Jerome Myers, they called him the poet of the poor,” Schwartz explained. “He loved the East Side and he painted the immigrants and how they lived.” In spite of the tenements and poverty, Schwartz noted immigrants held “a certain amount of pride.” This can be seen in Myers’ 1904 oil Evening Glow. It’s not a depiction of immigrants inside tenements or existing separate from the city, rather as part of its daily fabric. They are out and about on the street, participating in neighborhood life whether it be a conversation or children at play.

Schwartz also made sure to highlight lesser-known artists, notably Red Grooms, whose work captures the true essence of the city. Several of Grooms’ pieces are in the show including his 2009 charcoal Lunchtime on Broadway, which invites visitors to delve right into the happenings of a city block in the middle of the day. Grooms captures every detail perfectly with pedestrians moving in opposite directions, a bicycle tied to a bus stop, a postal worker on route and even a full trash can at the corner.

However, the climax of both Red Grooms and the show is his 1984-85 The Alley constructed out of wood and foam. It takes up an entire gallery, making museum goers feel as if they are walking alongside an alley, especially with the depiction of a newsstand at the far end. “I didn’t think it would be ready on time. And then all of a sudden it was magic; it was all built together and it cleaned up,” Schwartz noted. “It was a monumental job.”

Alongside Red Grooms, Francis Luis Mora’s also gets his due. Through a series of works titled, Manhattan Cocktail 1626-1938, Mora fleshed out all of New York’s history, mixing the past and the present so elegantly and interestingly. In one image, he shows a Native American and two settlers looking across the river at the skyline that would later be developed in the 20th century.

In the same gallery are works by Reginald Marsh, who Schwartz referred to as “the master of Coney Island” for his depictions of the famed beach. She also selected Marsh’s 1940 watercolor Memories of the Stork Club since it “was the most important and well known cafe/nightclub in the world.” 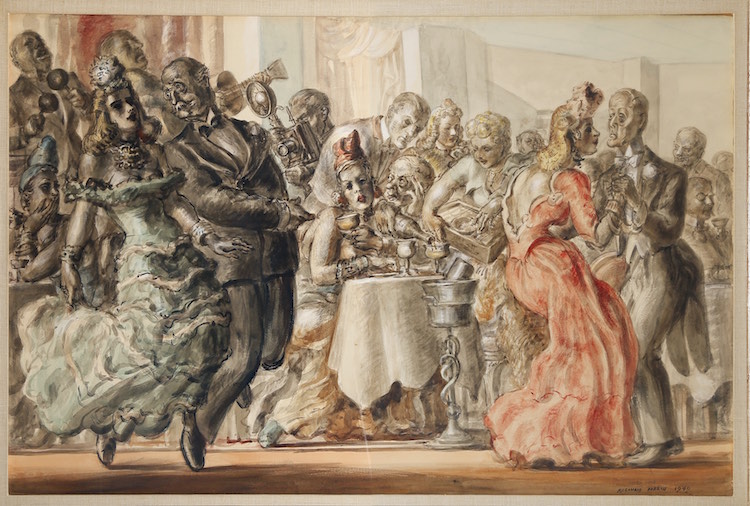 No exhibition about New York would be complete without a gallery devoted to the Brooklyn Bridge. The gothic arch, Schwartz noted, has become symbolic for many artists. The show features “a wonderful drawing of the bridge” by Georgia O’Keeffe. Various perspectives on the bridge are also present, including a sculpture by Red Grooms in the center of the room. “It’s pretty terrific how the artists interpret something that we all know and which is a gateway to New York,” she said.

Schwartz hopes that these various images of New York allow visitors to leave the exhibition with an ever-growing and deeper connection to the city.

“I want people to look at it. I want them to have memories,” she said. “I also want them to know this is their city.”