“As life traces the lines in our faces/ I won’t look away/ Some die too young/ Some live too long/ How dark is gone?”

Ben Harper has a always had a knack for weaving the personal with the political and his latest album, Call It What It Is, is no exception. The title track couldn’t be more relevant with the President’s oblique response to the uprising of white nationalists in Charlottesville, Virginia. Harper has previously covered the topic of race relations in America—notably on the 1994 song “Like A King,” where he wishes the message of Martin Luther King could help the Rodney Kings—and the bluesy “Call It What It Is” is also about police brutality. Tracks like “How Dark Is Gone” and “Dance Like Fire” have a social bent, but Harper has fun with the upbeat “Shine” and “Pink Balloon” (a song with a melody literally dreamt up by his wife).

Backed by The Innocent Criminals for the first time in nine years, the three-time Grammy winner has written one of his most lyrically deep and sonically versatile records to date. From the funk-rock opener to the reggae-infused “Finding Our Way” and the soulful closer, Harper shows his musical range. The multi-instrumetalist and his ICs will be performing at The Capitol Theatre on August 23 and The Surf Lodge in Montauk on August 27.

Who were your musical influences growing up in Claremont, California?
My main musical influences growing up are names you wouldn’t recognize. The day-in-day-out players…My Californian Inland Empire local brethren who picked up instruments because they had to—to live, to survive. To bring meaning to meaninglessness. This strong local music scene sheltered me, serenaded me and calibrated my broken compass. The occasional “You got something kid,” was enough to keep me picking, writing and dreaming.

Tell us about your family store that was patronized by music greats.
My family music store, The Folk Music Center, has been open for what will be 60 years next year. The store (which sells and repairs instruments, offers classes and house concerts and includes a museum) was started by my great grandparents and grandparents in 1958. Leonard Cohen, Taj Mahal, Jackson Browne, David Lindley, Ry Cooder, Sonny Terry, Brownie McGhee, Reverend Gary Davis and Joan Baez are just the start of a long list of extraordinary musicians who have walked through the door. The music store, and Taj Mahal seeing me play live at a young age, is what lead to my first professional touring gig with Taj.

Why did you decide to reunite with the Innocent Criminals on this record?
I feel like there is a great deal of creative open road with the ICs…More than that I just love making music with them and we trust each other. 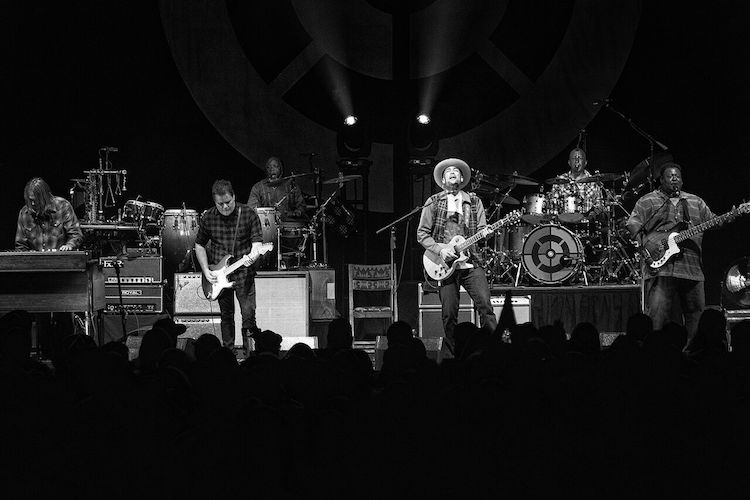 Describe the theme and sound of Call It What It Is as compared to past albums.
The record tells a story, lyrically, of six grown-ass-men, and that’s the band the Innocent Criminals. We’ve been through more with each other than most families: personally, socially, politically. I mean we’ve been a band through five presidents—if you count Trump. There’s a lot of that wrapped up in this record. I’m most pleased if the record doesn’t sound like anybody else but us. In a way, it’s a flare shot high: Who’s in, who’s out.

What’s the meaning behind the song “How Dark Is Gone” off of your latest record?
This song is kind of the answer—or maybe the response—to the title song, “Call It What it Is” (which is a song about police brutality: ‘There’s good cops and bad cops / White cops and black cops / Got to call it what it is / Murder,” mentioning the likes of Michael Brown and Trayvon Martin).

As an activist, you’re involved with many causes. How about efforts to get out the vote?
I’m sociopolitically active and motivated and I always will be. People get mad when artists sound off about politics…Anybody else is ok—just not actors or musicians. That just means I have to be more surgical in my approach. I worked my ass off for Hillary and I’d do it again even knowing the outcome. Unconscious sexism is rampant and must be fought against daily. End mansplaining.

What can we expect to hear when you perform at The Surf Lodge? Any reggae covers for summer?
I’ll be accompanied by the Innocent Criminals. We do the occasional cover, but it will be a mix of my entire catalogue for sure.