The end-of-summer bummers may be setting in, but on Monday, Aug. 21, expect people to be looking up. North Americans will be able to witness a total solar eclipse for the first time in 99 years.

For a photo round-up of the eclipse, click here.

What is it?
A total solar eclipse occurs when the moon crosses between the Earth and the sun, which completely blocks the sun’s light.

Who can see it?
Anyone in North America, plus parts of South America, Africa and Europe will get at least a partial solar eclipse. People located along a 70-mile-wide stretch from Lincoln Beach, Oregon to Charleston, South Carolina will see a total solar eclipse.

When should I watch in New York? 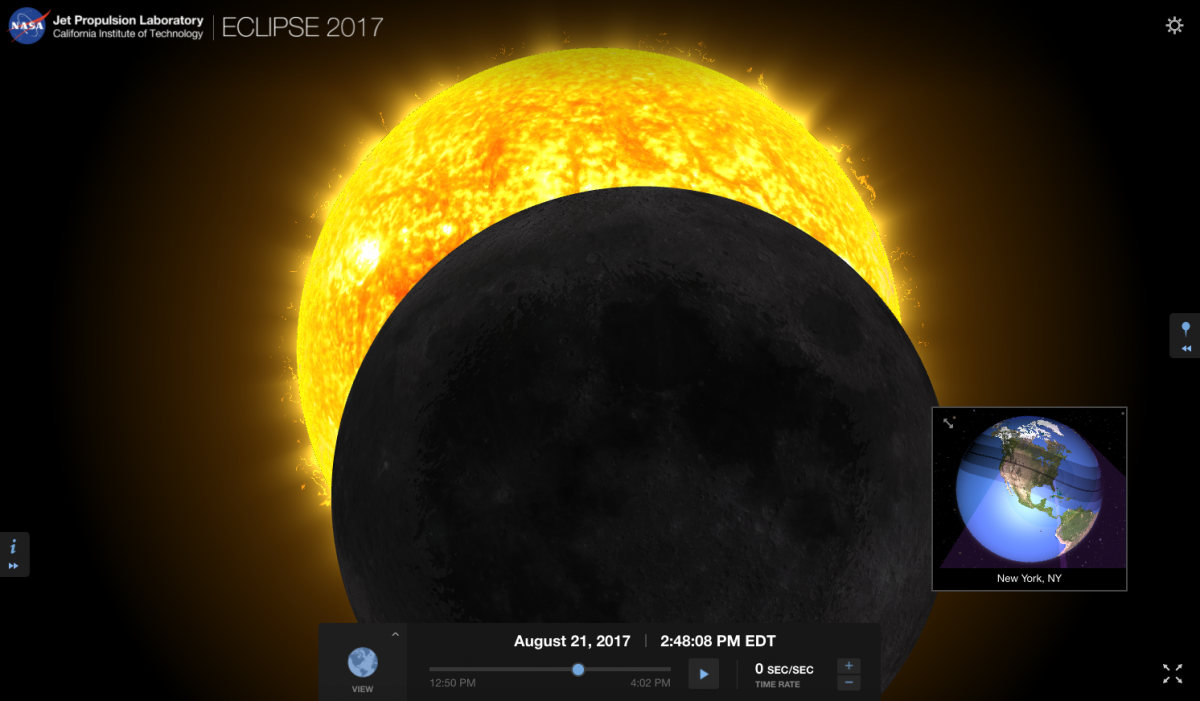 This will be the view in New York City around 2:48pm image: nasa jet propulsion laboratory

Long Islanders will be able to see a partial solar eclipse. It will begin at 1:23pm, reach its peak around 2:44pm and end at 4pm. On vacation? NASA’s interactive map has more time predictions.

Where can I watch it?
“Anywhere you can see the sun,” said Fredrick Walter, an astronomy professor at Stony Brook University. “On Long Island, about 24 to 25 percent of the sun will still be visible.”

What do I need to watch it?
Harmful infrared radiation can burn the retina of the eye and lead to permanent eye damage and blindness. Walter suggested getting special eclipse glasses (local libraries may have them) or making a pinhole camera. To construct one, poke a small hole in an index card using a pin or paperclip and put aluminum foil over it. Next, poke another small hole, this time in the foil.

Can I take pictures?
Walter recommended leaving that to the professionals. “Instead, look for stars coming out during daytime. Watch the shadow bands across the landscape. Listen to the birds, who will get confused by the sudden darkness. Note how the colors change as the light fades.”

When is the next one?
Another eclipse is coming on April 8, 2024. This one will run from Texas through Maine and upstate New York will get to see a total solar eclipse, Walters said. Road trip?