Mythical and visionary themes have come alive at the Solomon R. Guggenheim Museum with the first-ever museum exhibit of its kind. “Mystical Symbolism: The Salon de la Rose+Croix in Paris, 1892-1897” explores the six art and music salons hosted by French novelist and Rosicrucian Joséphin Péladan in the late 19th century.

The salons, which focused on mystical Symbolist art, were highly publicized at the time. They evoked freedom of expression and a rejection of naturalism congruent with the Symbolism movement.

Vivien Greene, a Guggenheim curator since 1993, worked on bringing this exhibition to life for nearly two years. It required extensive research, traveling to Europe to scour through museum storages and archives.

“I picked out the most prevalent themes that seemed to come up again and again at each of the salons and I ended up with about 40 works after all that was said and done,” she said.

These dozens of works from various artists, including Alphonse Osbert, Pierre Amédée Marcel-Béronneau and Charles Maurin, hang on the deep red walls while blue lush furnishings are scattered throughout and music plays. 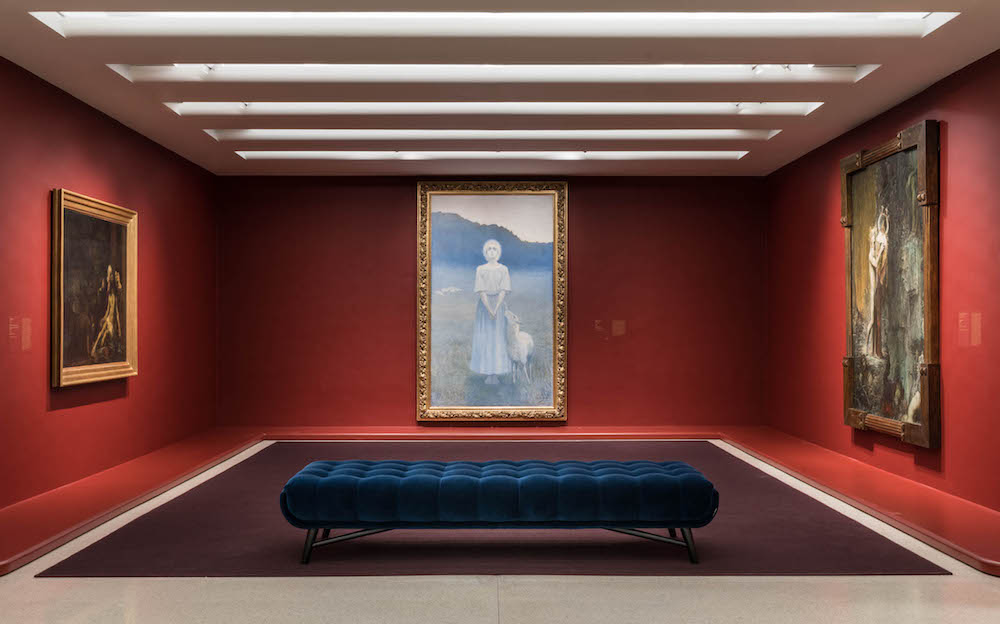 It’s hard to escape one major theme: the myth of Orpheus, a famous poet and exceptional lyre player in Greek mythology who was killed by the women of Thrace. His severed head still managed to sing with his instrument, a reason artists of Symbolism were enthralled by him. “They saw him as a metaphor for the artist and also someone who can transcend death,” Greene said. “The theme of transcendence is a very prominent one for the La Croix artists and for Symbolist artists in general.”

Other motifs come into play including the return to the late Medieval and early Renaissance. There’s also the idea of femmes fragiles, pure almost unrealistic women, and femmes fatales, man-eating, evil women. “That falls into the late 19th century stereotypes about women who were starting to have a little power at that time,” she explained.

Greene finds herself attached to one image in particular, Charles Maurin’s “The Dawn of Labor” from 1891. She described it as a cryptic image showing naked women in the forefront with workers coming over a hill in the distance. They hold a red flag signifying the revolt of the miners.

“The more I looked at it, I realized that the imagery on the righthand side of the painting has all these references to different themes described in Dante’s Inferno,” she said. “I realized that in a sense this painting is about modern hell…and how ugly and oppressive that was. The workers were so beaten down.”

Images like that one also make the exhibition current. Initially Greene sought to capture the legacy of Symbolism and of the La Croix. Today’s political and social climate, however, has made her view the exhibition in a new light.

“History repeats itself,” she said. “We are at a moment now that’s not so different from the end of the 19th century and people do find respite in trying to escape into a more transcendent state of mind.”