Living in Paris is the stuff of daydreams and rom-com fantasies the world-over. Parisians are lucky enough to do it. There is much to be said about life in the French capital: famous landmarks, the café lifestyle, cheese. Beyond the appeal of busy tourist areas—the Louvre, the Champs-Élysées and the Musée d’Orsay—is the Paris of the locals, where the charms of daily life go on without concern for visitors.

The Marais is to Paris what Brooklyn is to Manhattan. Located in the city’s 3rd and 4th districts, it is not really a tourist destination but it’s one of the most coveted residential areas. The remarkable transformation of this formerly derelict part of the city has changed the Marais from caterpillar to butterfly in just a few decades. It now lures in-the-know visitors with its popular eateries, stylish boutiques and a handful of impressive museums.

Residents of the Marais rejoice in their good fortune (and high incomes) to live in such an enviable neighborhood, roughly defined as the area between the neo-Renaissance Hôtel de Ville (City Hall) and Centre Georges Pompidou to the west and Place de la Bastille to the east. It’s a neighborhood of narrow streets rather than grand boulevards. What the Marais does have in common with the rest of the city is an abundance of beautiful historical buildings, some with splendid gardens recalling an era when palaces were virtual self-sufficient micro-villages. That air of self-sufficiency is still evident, albeit in the 21st century form of independent entrepreneurs establishing businesses. The Marais is a wellspring of successful fashion designers, interior designers and others who don’t necessarily require large spaces to hold big ideas. 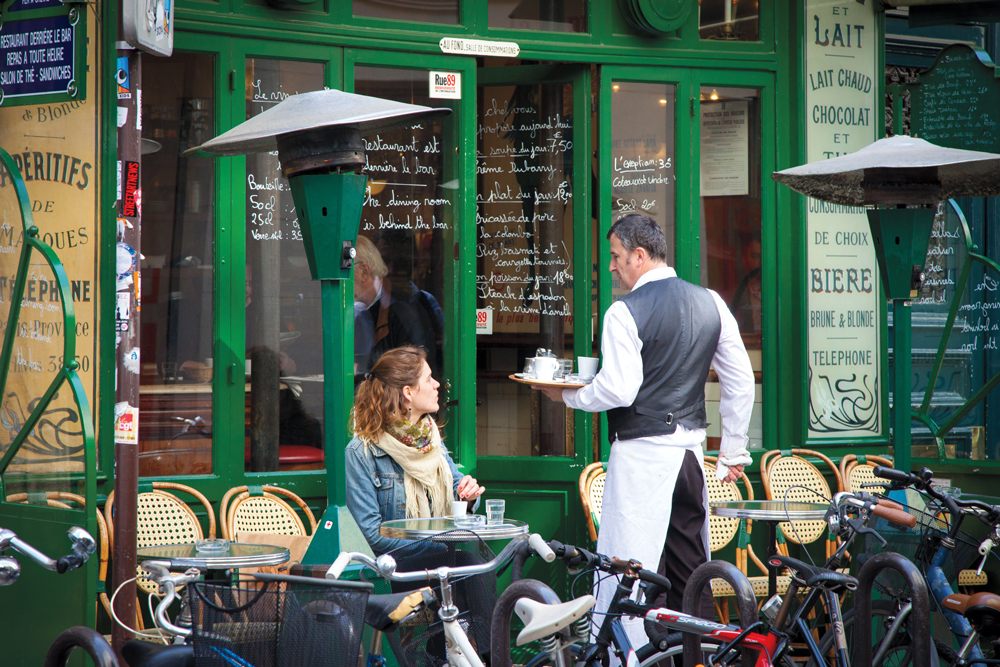 A walk along the principal streets (Rue des Francs Bourgeois, Rue du Roi de Sicile, Rue Ste Croix de la Bretonnerie and Rue du Temple) will reveal numerous clothing boutiques, perfumeries, chocolate shops and small hotels—none of which belong to international chains. They were created by savvy minds who value quality, just like their clientele. One of those little hotels is Hôtel Dupond-Smith. The smallest five-star hotel in Paris is also the smallest hotel in Paris, period. An inventory of a mere five rooms and three suites makes Hôtel Dupond-Smith the most coveted address in the neighborhood. This comes as no surprise—the level of comfort, style and personal attention have guests feeling very much at home. The convenient location also makes the hotel an excellent base for exploring.

Around the corner from Hôtel Dupond-Smith is one of the most charming streets in Paris: Rue du Bourg Tibourg. In essence a microcosm of the entire city, this short street is home to the requisite purveyors. It’s also the address of a smart little hotel owned by the Costes family (whose name went down in history in the Paris social scene during the 1980s with the opening and enormous success of the now defunct Café Costes). Anyone who was anybody in Paris at that time was seen at Café Costes either descending the marvelous staircase that dominated the room or in the famous restrooms where foot pedals turned on the water in the inverted-pyramid sinks. This Costes-style lives on in Hôtel du Bourg Tibourg, where an air of Orientalism welcomes guests as they step into the building.

More sobering is the plaque above number 24 remembering the deportation of Teophilat Israël to a WWII concentration camp, a vestige of the robust Jewish community that thrived there in the first decades of the 20th century. Today, public Jewish life in Paris revolves around the nearby Rue des Rosiers where a Hebrew bookstore, traditional restaurants and bakeries carry on their businesses amid inevitable gentrification.

One street over from Rue du Bourg Tibourg is the residence/boutique/atelier/fashion show venue of iconoclast fashion designer Azzedine Alaïa. This legendary outsider of haute couture eschews the world of high fashion to thrive in one of his own creation. Alaïa’s prescient purchase of an enormous warehouse space right in the middle of the Marais is indicative of his intuitive sensibilities, which see some of the world’s most famous women clamor for his custom designs. The inconspicuous entrance to the boutique at 7 Rue de Moussy is marked only by the name Alaïa discreetly chiseled in stone above the doorway. Through that threshold is a female fashionista fantasy (there’s no menswear). Shoes, dresses and other articles of clothing are displayed along with the accessories to take the glamour to a yet higher elevation. Alaïa can be commissioned to design one-of-a-kind pieces with private fittings and consultations for the ultimate Parisian fashion experience. Around the corner, at 18 Rue de la Verrerie, is the entrance to the fabled pavilion that hosts Alaïa’s private fashion shows. The space is open to the public as a venue for temporary exhibitions when it’s not in use by the designer.

The Marais is a small dot on a map of Paris, but it is big enough to have distinct neighborhoods. Toward its eastern limit (as defined by Boulevard Beaumarchais) is Place de la Bastille, a hive of activity buzzing day and night. The Opéra Bastille dominates the large traffic circle centered on the column topped by the gleaming Spirit Of Freedom statue by Auguste Dumont. The main artery of the Marais, Rue Saint Antoine, is best enjoyed just after office hours when the various merchants of French foods welcome customers on their way home from work.

It is in this eastern end of the Marais that the new Hôtel de Joséphine Bonaparte (known as Hôtel de JoBo) welcomes the achingly cool traveler seeking stylish rooms with historic allusions such as the abundance of roses in the décor. The aesthetic references the official name of Napoleon’s first wife and the splendid rose garden she kept at the Château de Malmaison just outside of Paris. JoBo perfectly exemplifies the eclectic style of the Marais. It’s also an easy jaunt home from the area’s bustling nightlife.

Some of the country’s most important museums reside in the Marais. Musée Picasso reopened a short while ago after several years of restoration. The Swedish Cultural Institute is host to temporary exhibits related to its home country and is one of numerous centers dedicated to non-French cultures. In a city with many exceptional streets, avenues and boulevards, Place des Vosges, is among the most unique. The covered arcades surrounding the square are always pleasant for strolls to see the art galleries, small shops or the home of French literary legend Victor Hugo (number 6) along the perimeter of the large green space in the center. Visitors will no doubt go home hoping to make a rentrée to this elegantly bohemian part of Paris.