Some of Robert Rauschenberg’s expressive, bold and ebullient paintings span up to 20 feet, but it’s a small, medicine cabinet-sized work that perhaps best introduces him to audiences. “Short Circuit” hangs near the beginning of MoMA’s sweeping retrospective, Robert Rauschenberg: Among Friends. In the piece, squares of white vie with rainbow stripes, photographs, found objects and writing. It’s participatory on more than one level, with moving, hinged doors that open to reveal other paintings by multiple other artists. It contains symbols of American life—a Jasper Johns flag, a photograph of Lincoln, Judy Garland’s autograph—and presents not just Rauschenberg, but, through him and his work, new modes of art. Throughout the exhibition are canvases from which light bulbs blink, and wheels, buckets, pillows, Coca-Cola bottles and more emerge from the picture plane and cross the dividing line from the artist’s realm into the audience’s space.

Rauschenberg once said, “I would have loved to have painted Rothkos or Pollocks,” but for six decades, this peripatetic, intellectual, spontaneous, deliberate, imaginative, inclusive, nostalgic, foretelling and revolutionary artist took it upon himself to produce what was entirely new—so much so that there wasn’t even a language to describe it. The exhibition reveals an artist so enamored of what he saw in daily life that he put it into his paintings. Literally. When he wanted a circular motif in a sprawling, color saturated 1954 composition, “Charlene,” he affixed an umbrella, spines and all, to his canvas. Rauschenberg’s works include mirrors, fabrics, coins, baseballs and doorknobs, and even chairs and taxidermied animals. He called his inventive, irreverent compositions “Combines.”

Combining is key to the story of the exhibition—Rauschenberg thrived on collaboration. Over the course of his life, he worked with a who’s who of American cultural icons, including Merce Cunningham, John Cage, Cy Twombly, Jasper Johns, Trisha Brown and Willem de Kooning. All of them, and many others, appear in the expansive exhibition.

Leah Dickerman, MoMA’s curator who organized the show in conjunction with London’s Tate Modern (where it debuted last winter), explained, “We have a myth of individual genius in American culture. The idea that you go into a garret and you have ideas alone after being visited by a muse, it isn’t the way it plays out in art. Rauschenberg is a super-collaborator. And he marks his relationships in the works of art that he makes—and none more than ‘Short Circuit.’ He collaborates again and again, with many of the most important figures, thinkers and makers in postwar American culture. That gives his work power. Power creatively, but also the power of influence, because these ideas spread and form the ground plane of American culture.”

Rauschenberg was born in 1925 to a family of modest means in a small town in Texas. He suffered from a slight degree of dyslexia that caused him, from the beginning, to see differently. He studied pharmacology at The University of Texas but left, refusing to dissect a frog, and then was drafted into the Navy where he worked as a psychiatric technician, made portraits of fellow GIs and visited his first art museum. After military service, Rauschenberg enrolled in a succession of art schools and traveled to Paris and New York. Even in his student works, on view in the introductory gallery, his irrepressible originality comes through in conceptual all-white paintings, experimental photograms and complex assemblages.

A new chapter in art began when Merce Cunningham asked Rauschenberg to design a backdrop for a dance. “Minutiae” (co-created by Jasper Johns) is a three-dimensional collage that works as a set, but also as an evolutionary step. A rich, red painted plane loaded with imagery stands on an armature in front of another, allowing dancers to pass between. A viewer’s movement a few inches forward or back, left or right, changes the visual experience. “He transforms the idea of art into an idea of encounter,” Dickerman said. “Minutiae” gave rise to an idea that would play out endlessly after Rauschenberg breathed it to life: paintings don’t have to just sit on a wall.

MoMA’s exhibition fills the building’s entire fourth floor, laid out roughly chronologically, and includes over 250 works by the artist and friends. In one gallery, two of Rauschenberg’s most famous works, “Monogram” and “Canyon” hold court. At the heart of “Monogram” is a taxidermied goat found in a used furniture store. It took Rauschenberg years to come up with the now iconic final composition. It still surprises, but it’s become so famous, it’s no longer unsettling. (In fact, up close it’s charming, with daubs of paint on its muzzle, as though caught in the act of eating one of Rauschenberg’s palettes.) 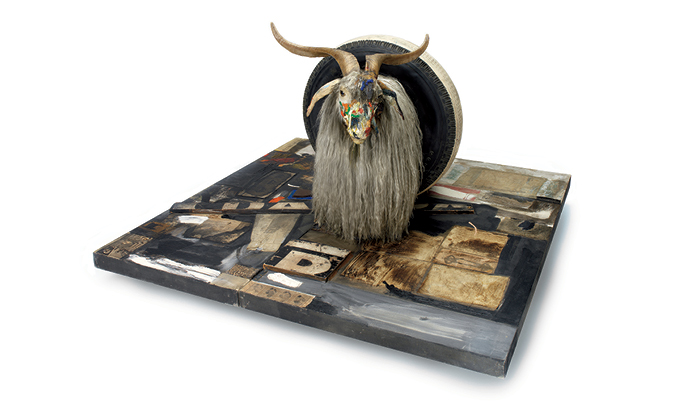 “One of the things Rauschenberg always talks about is the idea that if you want to make a work about the real world, it helps if you put some of the real world in it,” Dickerman said. “Here, it seems almost like he’s asking himself the question, ‘Well, if I can put some paper in the work, and I can put fabric in the work and I can put these other things in the work, why can’t I put a goat, or a baseball or a chair?’ He starts, around 1955, putting these objects that are much larger and more incommodious…It actually begins to break down the space between the space of art and the space of the ordinary world. I think that’s what’s so radical about that work.”

That break led to works like “Pantomime,” a combine from 1961 that includes two working electric fans. Another, “Painting with Grey Wing,” is so perfectly composed that viewers may not even realize the gray stroke in the upper right is the taxidermied wing of a bird. Nearby, a group of silkscreen paintings from the 1960s reflect the zeitgeist of American life, capturing images of downtown Manhattan, JFK and astronauts. As the exhibition progresses, peculiar machines, twisted metal street signs repurposed into sculptures and collaborations with some of the most creative minds of our time complete the picture of an artist who once said, “There is no reason not to consider the world as one gigantic painting.”

“Rauschenberg is an artist who sees value in seeking out encounters with new materials, and with other artists and other cultures. He thinks good and important things come from that,” Dickerman said. “I think there’s a very important ethos in that perspective, an openness, a commitment to dialogue, a curiosity about the world. In our moment, today, that kind of ethos has particular power. That spirit, that way of being in that world, is what I hope people will see as they walk through the show.”