The actor rapped his fist on the table to emphasize each word. He has been reading a book by the Roman Stoic philosopher Seneca on the “shortness of life,” he explained, his turquoise eyes shimmering under the California sun. “It’s incredible that this guy lived a couple thousand years ago and you read it and it sounds like someone who’s alive right now. We’re on borrowed time. We only have so much energy. It’s important for me to spend it really wisely.”

If Leto, 45, has been pissing around up to this point, you worry what he might accomplish when he gets serious. He has spent a career diving head first into roles—as teen idol, oblivion-seeking hedonist, method actor, emo frontman, rock climber, start-up founder, fashion plate—and has always landed on his feet.

He won an Oscar for his turn as an HIV-positive transgender woman in The Dallas Buyers Club in 2014. Soon he’ll add Denis Villeneuve’s long-awaited Blade Runner sequel to a CV that includes Fight Club, American Psycho and Requiem for a Dream. His most acclaimed roles arrived after he disregarded all Hollywood counsel and spent four years touring with Thirty Seconds to Mars, the band that he started with his brother Shannon back in 1998. It stands out among actor side-projects in not being embarrassing crap, selling 15 million records of pleasingly histrionic arena rock and entering the Guinness World Records for performing 300 shows in one tour. He’s currently mixing their fifth album with abandon. “It’s easy to write four songs a day, the real work is editing it all down,” he lamented.

Leto also serves as chief Instagram muse and confidant to Gucci creative director Alessandro Michele, managing to pull off a lilac violet dressing gown at Gucci’s recent cruise collection show. Today he’s in Carrera ski shades (he’s the brand’s 2017 ambassador) and a ripped T-shirt by the cult Parisian label Enfants Riches Déprimés. He was an early investor in Uber, Airbnb, Nest and Reddit, and in 2011 he founded the live-streaming service VyRT. He scales 3,000-foot cliff faces in Joshua Tree National Park to wind down from this. And even his tomfoolery is next-level—he once sent some anal beads and a dead pig to Margot Robbie and the rest of his Suicide Squad cast mates to get in the zone to play The Joker in the twisted superhero film.

You might put his industriousness down to his veganism or his recent disavowal of stimulants. “I do not dive lightly into the abyss any more,” he said. Instead, he mostly credits his artist mother, Constance, as a source of inspiration. She raised Leto and his brother with help from her own parents after their father walked out when Leto was a baby (he committed suicide later, when Leto was eight). His grandfather was in the U.S. Air Force so the family moved around a lot—and Constance later joined various artistic communes. “She encouraged me that a creative path is a worthy one. It was really brave of her to do that. The creative path is one that is fraught with imbalance and uncertainty, self-consciousness, fear and doubt.”

It was also as a child that he first read Frederich Nietzsche. “The Will to Power is such a fascinating thing,” he said. “I think we’re probably more responsible for the definition of ourselves than most of us would think. Probably. A great deal of the world thinks that…they may not have as much…authority in their own lives as they do.” He chose his words with exquisite care. “But I have found that we are…very responsible for our stories. Yep.”

We talked by his swimming pool under the shade of a jacaranda tree at his home in Hollywood Hills. I say home. Leto resides in a 50,000-square-foot disused Air Force base nestled into the mountains. It was built as an air defense compound during the second World War and features a deep bomb shelter, weapons vaults and radar station. Once the Pacific had been made safe from Japanese invaders, it served as a military film studio, producing the public information films that told Americans what to do in the event of a nuclear attack. Head to Jared Leto’s place. That’s what you should do.

It was his mother who sent him the link to the property; perhaps it seemed homely to her. Leto told her, “You’re crazy,” but fell in love when he saw it. There is more than enough space to house a tech start-up, a recording studio, various recuperating friends, meditation rooms, etc. And to host wild parties. In fact, it’s so voluminous Leto hasn’t managed to decorate most of the rooms. It’s monastic in its bareness, still the Air Force did have surprisingly good taste: mid-century window fittings, Spanish revival floor tiles, white-washed walls.

Is it true they faked the moon landings here? “God knows what they did here,” he said. “But it talks. We’ve already had ghost sightings reported by my housekeeper. A handyman quit the project as he had an encounter. But I feel quite at home up here. It’s like a refuge. You’re at the top of this mountain. There’s this breeze coming through. It’s hard to leave.”

Did I tell you how captivating Leto is? It’s a spacey intensity that you only usually find in cult leaders and people who have done a lot of hallucinogens. He chooses his words carefully, as if he has a hard time translating his thoughts into Earthling. He is a Capricorn, he told me, which would correlate with his goat-like fondness for mountains as well as a solitary nature. He is currently single (he dated Scarlett Johansson and Cameron Diaz many moons ago) and has no plans to reproduce. “I think it’s really important to be present if you have children. I have a lot of…things to take care of,” he explained.

He is close to Alessandro Michele and they hang out in Rome when they can. “He’s a really kind person. Unaffected. Creative. Talented. He’s a legitimate good friend of mine, not just a business or a show business friend. I don’t have many friends so I do enjoy spending time with the few that I have.” He counts Leonardo DiCaprio in this small coterie, too. “He’s really funny. I’ve known him for a very long time. But he’s usually busy. There are people I’m really enamored with but it’s hard to find time to spend with them.” 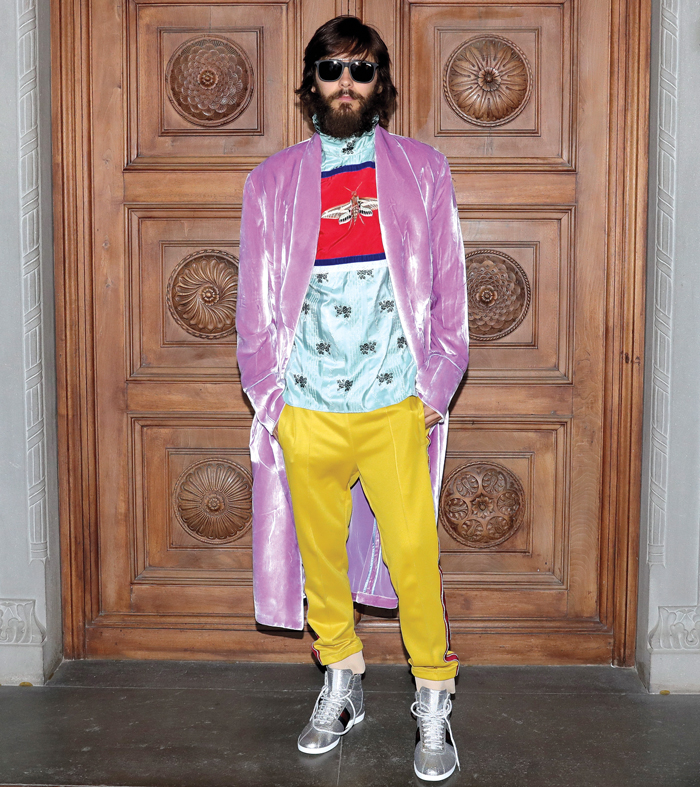 Still, he has things to fall back on. The critical acclaim he received for Dallas Buyers Club came as a vindication following the musical sabbatical some downplayed as little more than an eccentric career choice. But Leto thinks that times have changed and holding down twin careers in music and movies isn’t so unusual (see Janelle Monáe, Justin Timberlake, Mos Def).

His next film is Blade Runner 2049. “I play a character called Neander Wallace—to be honest they had me at the name,” he said. In the trailer he appears as a black-eyed medium, murmuring a monologue to Harrison Ford. “I read the script and fell in love with the character. But I don’t think I’m allowed to talk about it—I may have already got in trouble for telling you the name…” He pauses. “I can tell you that the experience of making it was one of the highlights of my film career.” He rates seeing Ridley Scott’s original Blade Runner as one of the seminal moments of his childhood. “Throughout my life I’ve always gone back to that film. There was something in it that really touched me and taught me a lot about cinema. There’s a level of craftsmanship and beauty that’s unparalleled.”

You might say the same about Leto’s own methods. To prepare for his role as a junkie in Requiem for a Dream, he spent a couple of weeks with actual junkies (shooting up with water, he insists). For Dallas Buyers Club, he arrived on set dressed as a woman and then got changed into character. To play The Joker, he spent hours watching violent crimes on YouTube and then delighted his cast mates by sending them live rats and used condoms to “create an element of surprise, a spontaneity and to really break down any kind of walls that might be there…” The Atlantic wondered if he had “ruined method acting for good.”

He smiled. “I don’t think I need to do it for every role. I mean if I was in Baywatch II, I don’t think I’d need to do it. That would be so much fun, to be in a movie as fun as that. But everyone’s got to do what works for them. Some people can be eating chicken nuggets with a stripper on their lap and then jump right into it. I’ve always just done what I have to do in order to do a good job—and I feel I do a better job when I give a bigger commitment. The shows that stand out with Thirty Seconds to Mars are the ones where I’m willing to cross the line and step into that uncomfortable place of imbalance, where I don’t understand what’s going to happen next. The same is true of climbing.”

Climbing rock faces is now his drug of choice—he has come to appreciate nature more as he matures. “The act of climbing is really a deep, introspective conversation with yourself about your limitations and your ability. There’s a lot of success and failure involved. And you learn a ton. I’m enamored with it.”

He pushes himself pretty hard, too. “I almost died recently,” he said, matter-of-factly. “I’ve been close a few times in my life. There was a moment in Yosemite where I was hanging off Taft Point, which is about 3,000 feet, overlooking the valley…I remember having a very direct conversation with myself.” About what? “About the inefficiency of losing my mind. About how important it is for survival, it was to stay as calm as I could.”

He is, on balance, fairly cool with death. “The great thing about death is that it allows new life. It’s an inevitable and important part of evolution. You have to say goodbye so that new ideas, new thoughts, new people can evolve.” He smiled. “I studied very old people for a film project once and they were generally pretty happy to say goodbye.” 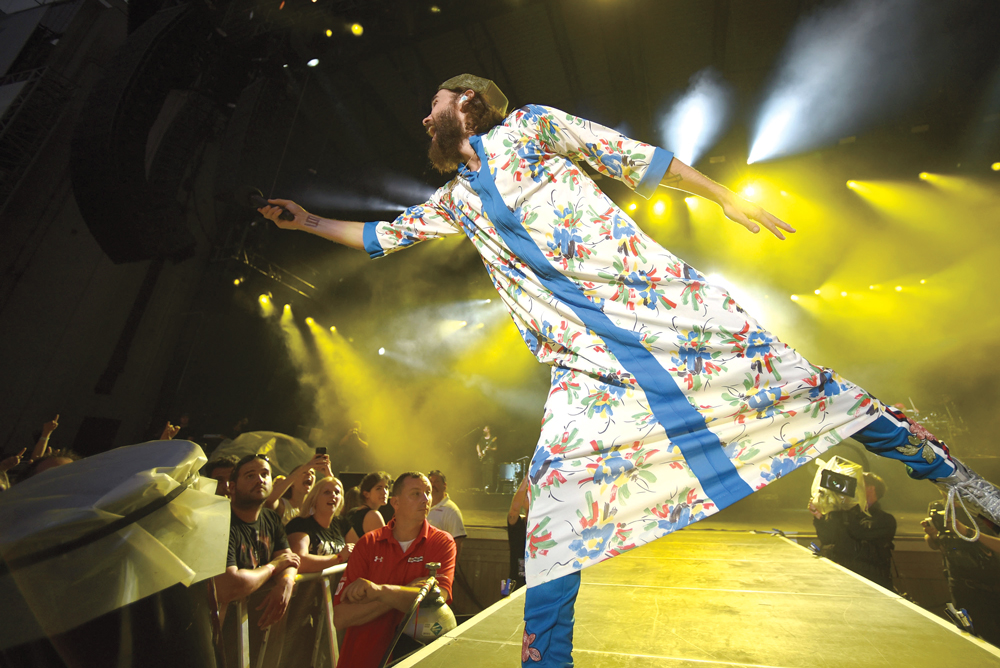 He is, however, psyched about the “biomedical revolution” we’re going to witness over the next 10 years. As a tech investor, he would be—Silicon Valley is currently pumping billions of dollars into life-extension, genetic editing, bionic limbs and artificial intelligence. Leto is particularly taken with the Singularity, the quasi-mystical belief among technologists that one day we will all merge consciousness with an omniscient artificial intelligence and upload ourselves into the cloud.

“It’s inevitable that will happen at some point.” You think? “Of course! You’d have to be a monkey not to realize that. The difference between ourselves and our technology will be hard to decipher and determine. I mean, this is a long time in the future, but we are going to become an interplanetary species. Culture and society will advance. And we will become indistinguishable from the technology that gets us there. If you refuse, you are going to be left behind in the Dark Ages. You won’t even be able to talk to people, you’ll be grunting compared to the language that they speak.”

He tried to reassure me. “It’s far away but I don’t think it’s science fiction. I think it’s reality. Haven’t you had that thing, where you dream something and it sort of…happens?” Less often than Jared Leto, I imagine.