Inspiration can come from any corner of the world, but it’s a New York state-of-mind that filtered its way into the designs of Long Island natives A’kai Littlejohn and Chris Russo, two cast members of Project Runway Junior’s second season. The state means different things for each contestant, who auditioned for the Bravo reality series to expand on their already-burgeoning fashion careers. Littlejohn was the cast’s youngest at 13 (he’s now 14 and starting high school). Russo was one of the oldest, his college application to the Fashion Institute of Technology had already been submitted.

“I didn’t know what it would be like, but it had been my favorite show since I was a kid and I love fashion,” said Russo, a Calverton native whose grandmother introduced him to Project Runway and taught him to sew. “I knew that if I didn’t try I would be mad at myself. I’m happy with how it turned out and I think it really helped me with my design aesthetic, but I definitely had no idea what I was getting into. I hated watching it. I had the most anxiety I’d ever had in those three months.”

Hauppauge’s Littlejohn taught himself to sew at age three, taking most of his inspiration from whatever was in his mother’s closet. “I remember drawing on everything and making dresses out of anything I could find,” he said. “Mostly toilet paper and pieces of fabric I would cut out of my mom’s clothes.” He interned for designer Madeline Grudens of Geraci Condello at the ripe age of nine. “She really taught me business aspects of the fashion world. And she taught me the technical words for what I’d already been doing, like draping. I was already doing it but didn’t know the word.”

Littlejohn, who cites Ralph Lauren as an inspiration, had already designed his spring/summer 2017 collection when he went to New York City to tape the show’s second season and his background was a serious asset. “My experience before the show did really help me—knowing material was a really big thing. You want to make sure your material for your garment speaks for itself. You can’t force the material to do something. My draping skills really helped.” 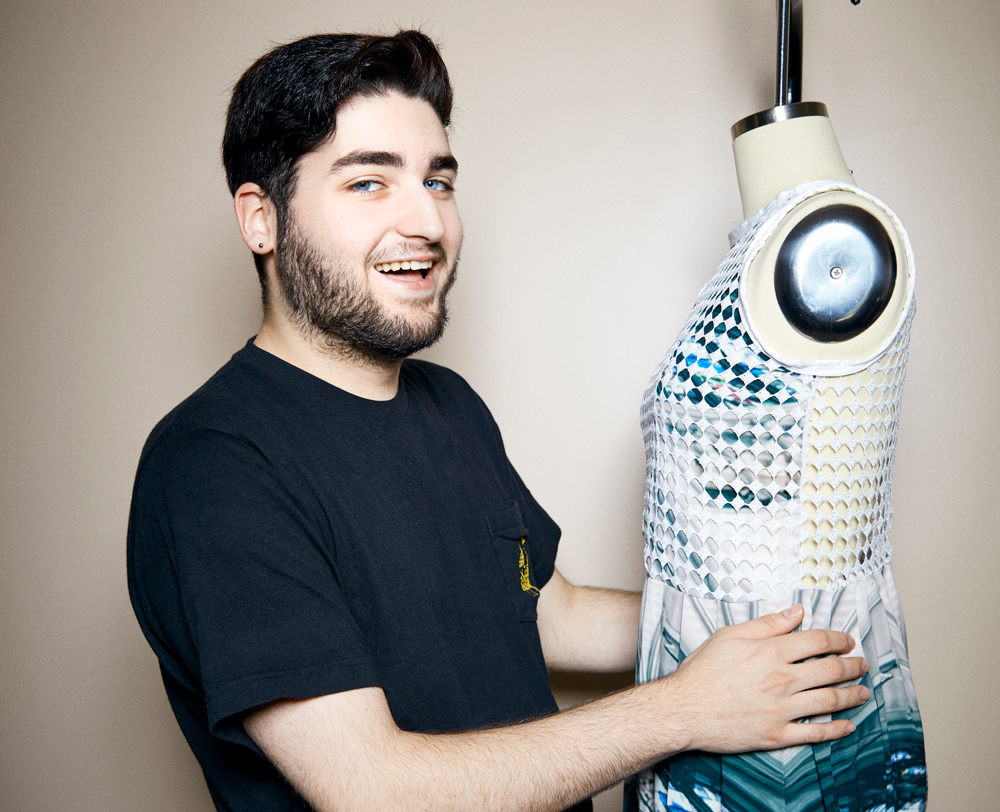 Calverton’s Chris Russo enrolls at FIT this month, but he’s already well ahead of the learning curve.

The second season of Project Runway Junior, co-hosted by Tim Gunn and Hannah Jeter, aired from December 2016 through February 2017. It started with 12 designers under the age of 18 and whittled them down to the final four, all of whom showed collections in the finale. Russo was one of those last four standing and found himself named the runner-up with a largely monochromatic, architectural and highly detailed line that was “inspired by my home state of New York.”

Even though he didn’t win, Russo, who’s particularly inspired by Italian fashion house Moschino, found the show creatively rewarding. “It made me look at things more personalized…Being on the show really helped me develop what I wanted without having to listen to other people.”

Still, it had its drawbacks. “I can’t speak for the other kids, but it was very anxious,” Russo said. “People online were not pleasant and it’s hard to ignore crap like that. It was one of the most amazing experiences I’ve ever had, but having to endure crap from other people has been really hard…Even though it’s a bunch of kids making clothes it’s still reality. Doing it was great, but I wouldn’t watch myself on it again.”

Littlejohn, who was eliminated in episode five, had a slightly different reaction. After leaving the series, the designer showed his spring/summer 2017 collection at Verace restaurant in Islip and he’s nearly sold out of most pieces on his website since then. He feels a sense of momentum from Project Runway Junior, aided in part by television appearances and newspaper coverage, and credits the experience with learning to sew faster and better. “It was definitely an amazing platform to get me out more into the world and more recognized,” Littlejohn explained. “It also really helped my confidence level.”

Littlejohn’s current collection was inspired by Long Island, particularly his time out East.

“My inspiration was flowers. I really think about nature when I’m in my design process,” said the designer, who is now working on the spring/summer 2018 collection that he plans to show this fall. “When I want to draw, me and mom go out East in the Hamptons to the beaches and I like to sketch there. In the summer I spend a lot of my time at beaches in the Hamptons.”

While shooting his five episodes, Littlejohn felt a lot of support from Gunn and the judges, but didn’t see his other competitors lending much of a hand. He tried to stay focused on his own style and take in any advice that felt helpful. “On the show people were definitely competitive. Some helped each other out, supporting each other, but the youngest contestant on the show—me—didn’t really get any support from others. There was pressure because you only have literally a day to design an entire look, which can be challenging. But I learned from it. And having a mentor like Tim Gunn was a big help. He told me, ‘The little details matter.’ If you’re in a huge rush and you make a little tiny sewing mistake you think it will be fine, but in the long run it’s not fine. Everything should be as perfect as possible.”

What you didn’t see while watching the challenges in the episodes was the on-set tricks used by the producers to make it look like everything was happening quickly. The designers did their own work, but most episodes were shot over the course of several days rather than in one swoop. “The biggest surprise about the filming was that they made us wear the same clothes two days in a row so everyone would be smelly by the second day,” Russo laughed. “There are child labor laws so they can’t have kids working from 8am to 12am. They have to make several days look like one long day. Toward the end of filming we had to wear the same outfits for three days because kids had to go to school. I’m sure if you look hard enough you can see me with different socks.”

Russo is beginning his FIT studies this month and planning to launch a fashion brand, though he hasn’t quite determined what that will look like. He knows that the most essential thing he needs to learn is the business side, knowledge he hopes to gain in college. Littlejohn is planning to apply to fashion colleges after high school and from there, “be a successful, high-end fashion designer. I want to take over the world and dress all the celebrities.” For Littlejohn, there’s no real difference between the high fashion of the Paris runways and what he creates in his parents’ Long Island home. “Fashion,” he said, “is a state of mind.”