He’s just returned from a much-needed vacation in Jamaica, hence the Bob Marley wafting through the studio. “I need music and love how it inspires everyone here,” LaQuan Smith said. “People forget to have fun while they’re working, but you can’t take yourself too seriously.”

The 29-year-old fashion designer imbues the clothes he’s crafting with equal parts fun and femininity. The influence of music is evident in his fall 2017 collection: catsuits, corset-laced pants and a thigh-high PVC boot evoke thoughts of a certain chanteuse. “Grace Jones was definitely an inspiration,” Smith noted. “I wanted to do something that was super strong in silhouettes, pieces that felt dominating and fierce and fab. The collection goes back to those music-video moments that inspired me—the really strong visuals of Missy Elliott, for example—but it’s also about what the future looks like. It’s strong, edgy, conceptual and very unapologetic.”

Smith is quick to say he hasn’t felt the need to conform to any mainstream ideals since he discovered his love of fashion and illustration at an early age. He was raised in St. Albans, Queens, heavily influenced by his grandmother, Hattierea, who was good with a needle. “She was always taking me to fabric stores. I was her little assistant,” Smith remembered. “Growing up, I was never into video games. I wanted a sewing machine and fabric.”

Smith also discovered an affinity for sketching and briefly considered a career as a cartoonist. “I would sketch in my notebook all day, every day. My mother would check my notebook when I got home to see whether I was sketching or doing my schoolwork.” Smith also recalled feeling like a bit of a misfit until a middle school principal accepted his suggestion of producing an in-school fashion show. “Spearheading that really gave me a leg up. I felt like the other students understood who I was and I felt more accepted. That moment really set me on a path.”

A stint at Manhattan’s High School of Art and Design followed, but when Smith applied to both Parsons School of Design and the Fashion Institute of Technology, he was rejected. “I wasn’t going to let that stop me,” he insisted. Instead, he scored an internship at BlackBook magazine and networked at parties during New York Fashion Week. Smith was also honing his aesthetic and developing designs. In 2010, he founded his eponymous label and presented his first show, just 20 looks, in February of that year at New York’s Society of Illustrators. André Leon Talley, at the time Vogue’s editor-at-large, was among the attendees, while Smith’s grandparents were sitting nearby in the front row.

Talley and others took notice of the undeniable sensuality of a LaQuan Smith look, which is the designer’s intent. “It’s very sexy and very current, but I don’t like to use adjectives like sophisticated or young. I prefer words like ‘ageless’ and that’s honestly because my demographic is so wide. I’m really proud of that. The women who seek out my clothes are all different backgrounds, different ages and body types. What they have in common is that they’re unapologetically sexy and confident and they know how to celebrate their curves. They also love to wear something that’s a conversation piece.” Indeed, in reviewing his fall/winter 2017 collection, Women’s Wear Daily said Smith “doesn’t just dabble in the overtly sexy, he bathes in it.” 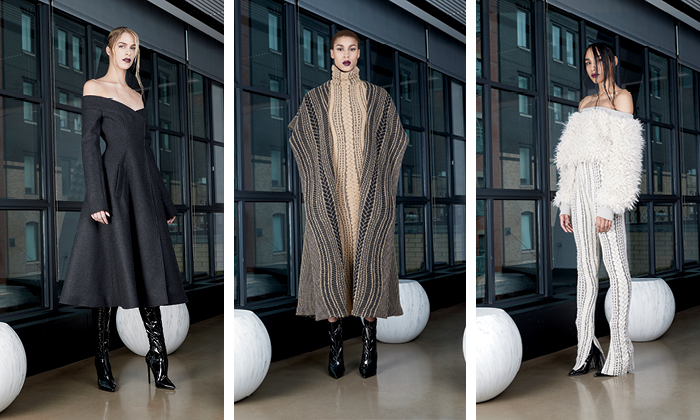 He favors neutral tones, largely black, white, gray and several shades of nude that respect a wide range of skin tones. You won’t find a lot of color in a LaQuan Smith design, unless he’s created a piece that feels especially playful, like his ultra-brief Daphne Hot Shorts in hot-pink tweed. And while his body-hugging designs seen on red carpets tend to dominate the conversation, there is a something-for-everyone approach to Smith’s collection. His sequined Loren Gown, with its loose silhouette and high-low hemline, accommodates a variety of body types, while his A-line Mirror dress in neoprene (a favorite fabric) features glittering panels that create a waist-cinching effect. “People come to us for wedding receptions, for Bar Mitzvahs or because they’re going to Cannes,” he said, and the emails he receives after a special event mean everything to him. “[Women are] thanking me for designing something that fits them so well, not just their body, but also their personality.”

Put all those elements together and it’s little wonder that he’s attracted A-listers like Lady Gaga, Rihanna (who wore Smith’s gold chainmail bodysuit in her 2010 “Rude Boy” video) and Beyoncé. “That happened very organically,” he said of the latter relationship, noting that he struck up a friendship with the performer’s longtime stylist Ty Hunter. Soon enough Smith was crafting a lace bodysuit with matching duster coat for Beyoncé to wear at the March 2015 launch of streaming service TIDAL. Other projects have since followed and Smith keeps favorite seamstresses and tailors on speed dial for those unexpected requests. “If Beyoncé is calling for 25 dresses for her and her dancers, you have to be ready. Depending on the project, I have very good people I can call for one of those crazy turnaround times. I call them the 24-hour guys.”

And while his early collections were crafted in his bedroom at his grandparents’ St. Albans home, Smith has since opened a studio—though he hasn’t traveled far. Doubling as his showroom, the space is located in Long Island City, in the same building as one of his manufacturers. “It felt very natural and organic to be just a few feet away, but it’s more than that. I’m proud of the idea that I’m from Queens and the brand was born and created in Queens. And Long Island City has become this really cool neighborhood. I also love the fact that it’s quiet. I create better when I’m at peace.” He employs just six people. “I like to keep it small, like family,” and in addition to his twice-yearly collections and celebrity projects also does custom work for corporate clients. “I’ll design uniforms for Heineken for the U.S. Open…It’s not something I publicize much, but they’re a great partner and it also exercises my manufacturing capabilities for that moment when I have the opportunity to get into a big department store.”

Of course, being an up-and-coming designer comes with a specific set of struggles—especially when you’re a favorite of celebrities. “Being a young, black designer who’s completely independent, I get ripped off all the time. That is without question the most frustrating aspect, to look at designs by Yeezy or Balmain and see my work and know it’s based on something I did for Kim Kardashian or Rihanna or Lady Gaga. Those relationships have helped me so much in creating brand awareness, because everything I’ve done for them has been spotlighted. But that spotlight comes with a downside.”

What does the future hold? Smith’s collection is currently available both on his website and at a handful of boutiques around the U.S., like CHURCH Boutique in West Hollywood to Posse Riot in Atlanta. Locally, you’ll find his designs at Esti’s in Cedarhurst. Smith’s most immediate ambition is to build up the label’s retail availability. After showing his spring 2018 collection in New York on Sept 10, he will head to Paris for the first time for market appointments. “Buyers have asked to see us there and it’s something I’ve always wanted to do. It’s time to make that commitment.” His wish-list retail goal: “I’d love to be at Barneys.”

That’s the first step in Smith’s ultimate quest to become an international brand “on the scale of a Ralph Lauren or Azzedine Alaia or Cristóbal Balenciaga.” He expanded his label to include three styles of shoes in the fall 2017 collection, hoping handbags and a fragrance will soon follow. “I want to do so much more, like furniture and home décor. I’d also love to do an art school, so other kids like me will feel like there’s a place that accepts them and nurtures their talent.”

There’s undeniably a bit of irony in that last thought. Late last fall Smith achieved another milestone when he learned that a sheer maxi dress of black cotton lace from his spring 2015 collection—worn by Kim Kardashian to a Cannes party that year—would be one of 75 looks featured in an exhibition showcasing the work of 60 black fashion designers. The exhibit’s location: The Fashion Institute of Technology.

Smith’s first thought was that he felt incredibly honored to be featured alongside fellow designers he had long admired, legendary names like Patrick Kelly, Willi Smith and Stephen Burrows. But he also can’t deny the poetic symmetry: a dress he designed residing in the museum of the school that rejected him. Edifying as it may be, it’s also a hint the world may just be catching up to the next great designer cut from his own cloth.