For more than half a century, Greenport’s Sound View was, as its name suggested, the North Fork’s most scenic accommodation. Its sweeping panorama over the Long Island Sound is now under new ownership, and after completing a year-long renovation, it opened in August along with The Halyard, a new restaurant helmed by James Beard Award-winning chef Galen Zamarra.

Visitors will notice the dramatic revisioning of the Greenport landmark. The long awaited renovation, led by the designers at Brooklyn’s Studio Tack, pumps breezy vibes throughout 55 waterfront guest rooms—each with private or shared decks overlooking the coast.

“I spent close to a year living and breathing the place,” said Erik Warner, a cofounder at Eagle Point Hotel Partners, the boutique hotel group that now owns the Sound View. “I was dedicated to paying homage to its past while bringing Sound View into the present.”

The team was careful to articulate the property’s roots. The original founder, Jack Levin, was well-known for running the Soundview Inn since 1953, but he started his enterprise by opening a successful beachfront snack stand all the way back in 1935. Recognizing the inherited character, a refashioned Sound View makes room for nostalgia—it will open a poolside concession stand, Jack’s Shack in the summer of 2018, recalling the plot’s humble beginnings. 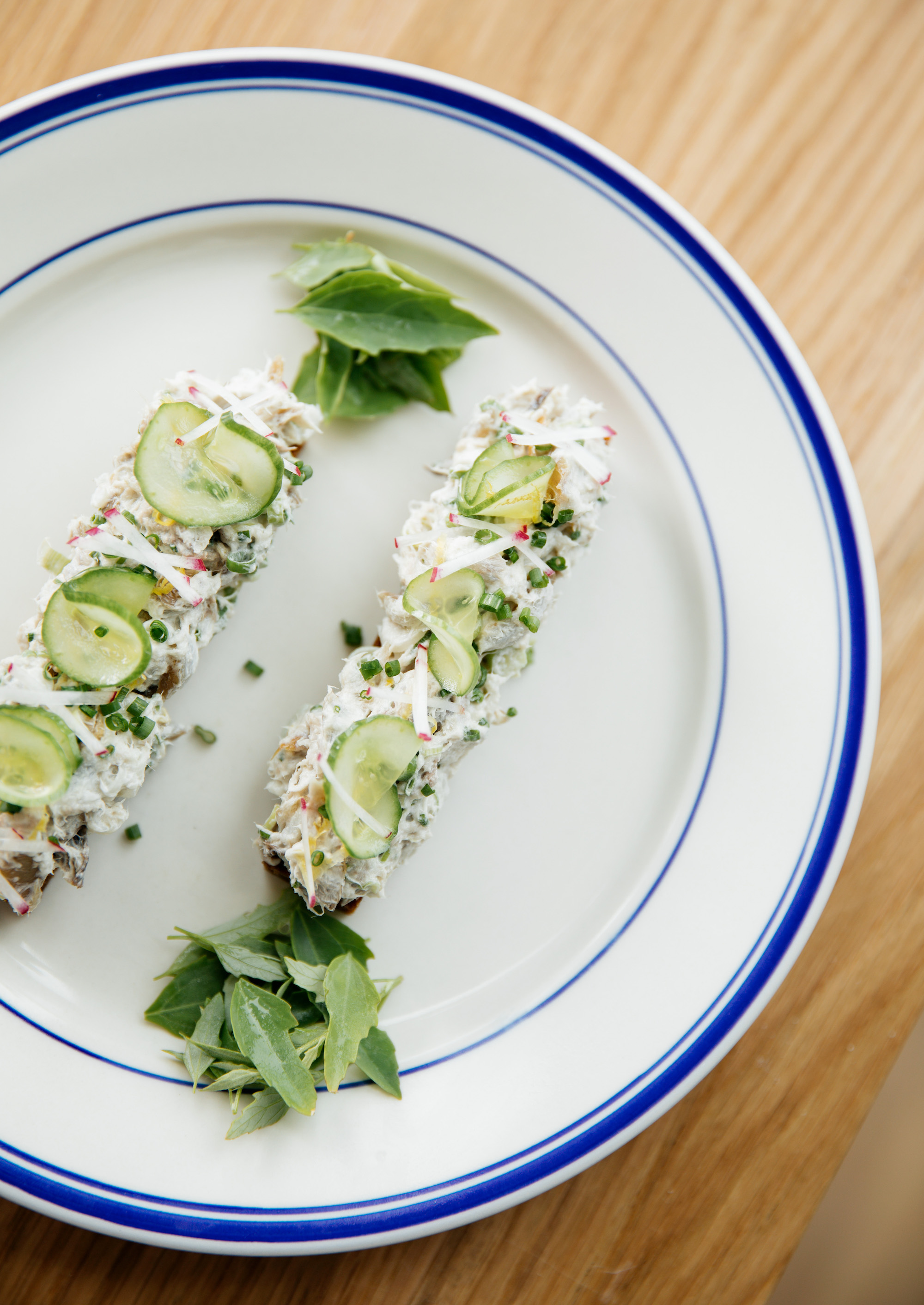 The Halyard opened within the former restaurant, modernizing the banquet hall set-up. A central bar was split in half, salvaged and now rests along the wall. Its original bar stools were re-upholstered in plush navy leather. The former palette of dark woods, starchy table cloths and brown carpeting was lifted, now awash with white painted ceilings, blonde wooden floors and leaner chairs. A brightened, nautical polish absorbs the coastal backdrop, connecting diners to the Long Island Sound.

It’s neat, but certainly not proper (which wouldn’t be very North Fork after all), allowing a laid-back vibe to carry through to the menu. Zamarra, well-known for Mas (farmhouse), his restaurant in Greenwich Village, happened to meet his wife in Greenport while they were both visiting years ago. No stranger to the area, his dishes follow suit. He’s pulling locally sourced fish and flavor, all from the Atlantic Seaboard and the North Fork, and stepping them up with pared-down, playful versions of coastal American classics.

“I was attracted to the area because it has such raw potential,” said Zamarra, chatting about the North Fork’s abundance of produce, fish and shellfish—a bona fide dreamboat for any Manhattan chef, especially one known for his exacting seasonality. “It’s under appreciated.”

Those flavors pop and riff in dishes like lobster beignets dipped in comeback sauce, and smoked bluefish salad on pudgy New England brown bread. Large-format dishes are less formal than they are fun. Items like lobster and the daily catch are served whole, while buckets of fried chicken are piled with corn on the cob, and tasty cocktails (and mocktails) can be served in fishbowls for sharing.

Zamarra said that the seasons will dictate how the menu evolves. “Fall will feature pumpkins, root vegetables and apples, and I see us using more hearty preparations during colder months like oyster pot pie and duck cassoulet.”

Hop over to the adjacent Piano Bar, a svelte, moody space that was modestly touched up, keeping the same look it’s had since the 1970s, and you’ll find reason to cheers. A weekly series in collaboration with NYC’s Joe’s Pub will bring rotating live music to the bar every Saturday through the end of fall. It’s a bridge for locals and travelers alike, aimed to drum up conversation and community.

For guests staying the night, the designers peeled back the layers of each room, nodding to Greenport’s nautical heritage with nobby furnishings—sail cloth patio chairs, raw timber walls and textures ranging from boating rope to dusty-blue knotted rugs.

Fear of the Hamptons crowd is nothing new for Greenport, which for the greater part of the last century has seen more garden hoes than croquet clubs. Over the past few decades, as wineries sprang and restaurants pooled, the area has kept its cool—buzzy yet cozy, without trying so hard as to be trendy.