For Chris Levi of Holbrook joining the military was natural. He grew up with a tight-knit group of friends, pushed himself in athletics and attended high school at the New York Military Academy in Cornwall-on-Hudson.

“I was always fascinated with the military,” Levi recalled.

Levi didn’t have to think twice about enlisting in 2003. He did a first tour in Afghanistan and second in Iraq. On March 17, 2008 while in Iraq, Levi was riding in the passenger seat of an armored Humvee when an IED hit the vehicle. During a moment of consciousness on his way to the doctors, he noticed he could see the bones in his arm. He joked he “looked like the terminator.”

Levi returned to the United States less than a week later without his legs. The doctors were still considering amputating his left arm. He was fine with all of that. His only question was, “How long until I get to go back to Iraq and see my unit?”

But within days, Levi shifted gears and was focused on a new goal. When a unit returns from a deployment, they walk together on the tarmac to a debriefing area. He was determined to walk with them.

“At that point, there was 10 months left in their deployment so I [gave] myself 10 months to be able to walk with my unit shoulder-to-shoulder,” Levi said.

Less than a decade before Levi’s triumphant reunion on the tarmac, Stephen Siller did something that came naturally to him. On his way to play golf with his brothers after his shift as a firefighter with Brooklyn’s Squad 1, Siller heard on his radio that a plane had hit the North Tower of the World Trade Center. Siller, who spent much of his childhood in Rockville Centre, went back to the firehouse to get his gear and drove to the Brooklyn Battery Tunnel. It was closed for security purposes, so Siller strapped all 60 lbs. of gear to his back and raced through the tunnel to the Twin Towers, where he and 342 other FDNY members were killed trying to save others.

Siller’s family banded together to form the Tunnel to Towers Foundation in Siller’s memory. One of the foundation’s signature initiatives is the Building for America’s Bravest program, which builds mortgage-free smart homes for soldiers catastrophically injured in the line of duty.

“People ask all the time, ‘How does a 9/11 foundation get involved with smart homes for veterans?’” said John Hodge, the Tunnel to Towers Chief Operating Officer and Siller’s first cousin. “It’s quite simple. The first responders fought the first battle in the war on terror on September 11 and then they literally passed it off to the military.”

Levi, of course, was one of those soldiers who took the baton and ran with it—full speed ahead, just like Siller heading towards the towers on 9/11. Levi, who had moved from Walter Reed to his parents house, met Frank Siller, the Tunnel to Towers Chief Operating Officer, at an event at CitiField. He learned about the smart homes and for the first time, he heard the name Stephen Siller.

“I was upset at myself for not finding the story,” Levi said. “I should have done more. I knew there were people who did amazing things on 9/11 and I feel like as an American I should have sought those people out.” 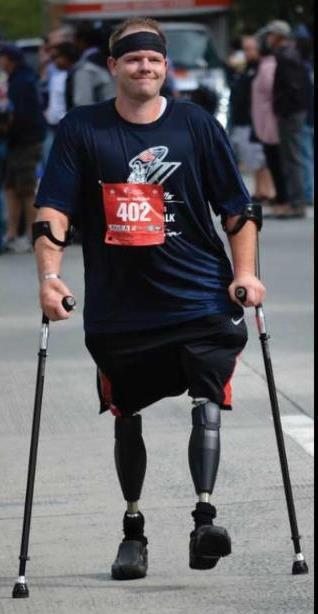 Chris Levi participating in the Tunnel to Towers 5K, an annual race to benefit the foundation’s efforts to help first responders and veterans

Levi didn’t apply for the home right away. He was busy going back to school and training to be a financial advisor. (He is now self-employed as one.) The Tunnel to Towers leadership called him one day and urged him to submit an application as he said he was still living with his parents. Hodge said the foundation selects successful applicants based on severity of injuries. If the solider is missing multiple limbs or has clear traumatic brain injury, s/he is approved for a home. Then, the process of funding, designing and finding land begins. The solider gets to pick the location and the design. Levi’s is a one-story home with a courtyard. He’s already thinking about hosting barbecues.

“The thing I’m really looking forward to is…being able to make it my own,” Levi said. “Living in a boarding school, nothing belonged to me. I was just renting it. Then I went to the military, same there. You can’t really make a hospital room your own. I never planned to stay [home in my childhood bedroom].”

Hodge can’t wait to hand over the keys in the spring of 2018.

“He is a rockstar,” Hodge said. “His attitude is an inspiration to everyone. He’s made sure his life continues to move forward despite his injuries.”

And he sees a bit of his cousin in Levi and the nearly 60 veterans who have received or are in the process of receiving a home through the foundation. 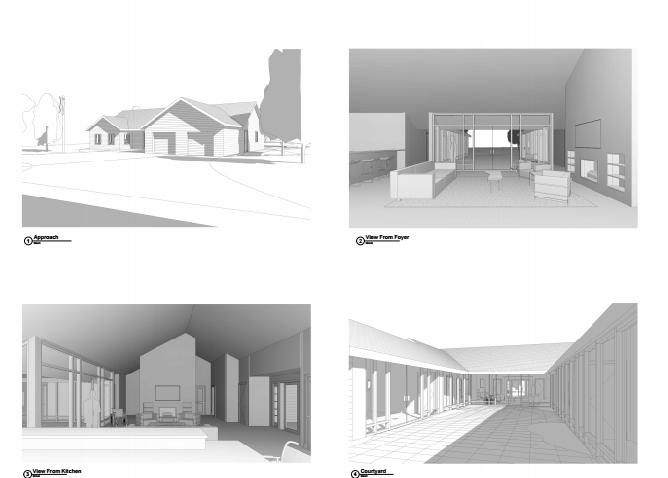 A rendering of Levi’s home. The bottom right image shows the courtyard he can’t wait to entertain in.

One of Levi’s newest missions is ensuring Siller’s story lives on.

“All these people who want to know what America is, his story is pretty much the definition of it,” he said. “If we forget his story we forget the best part of our country.”