Glenn J. Winuk never did anything half way. Once he started taking karate lessons, he didn’t give up until he became a black belt. As a partner at international law firm Holland and Knight, breaks weren’t in his vocabulary. And as a volunteer firefighter and EMT in Jericho, he frequently put himself in harm’s way to help people. It was no surprise then that, on September 11, he ran towards the South Tower, where he ultimately laid down his life saving others’.

“Glenn was one of those kids that got on his bike and chased the fire trucks when he heard the sirens,” said Jay Winuk, Glenn’s older brother. “He was always enamored by fire fighting and police work…the generosity and braveness [of it].”

It was also no surprise that Glenn became a firefighter in the first place. He started while still in high school and eventually became an officer and fire commissioner. Good nature was in his blood. Jay still recalls those moments when the siren blared and his brother rose from the dinner table, raced out the door and ran into burning buildings or was called on the scene of major car crashes.

“It is a stunningly brave thing to do, and watching Glenn do this countless times over the years was impressive beyond measure. I’ve come to appreciate that courage and selflessness about him even more since his passing.”

To pay tribute to Glenn and help others move forward from September 11, Jay and friend David Paine established MyGoodDeed (also known as 9/11 Day) in 2002. They had two goals in mind: to establish September 11 as an annually-recognized national day of service under federal law and to build nationwide participation in what they called 9/11 Day. 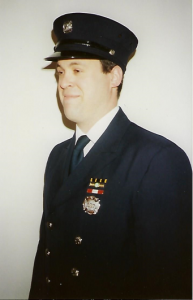 What began as an online grassroots initiative quickly gained thousands of participants and in 2009 they got their first wish with the passing of the Edward M. Kennedy Serve America Act. The Act, signed into law by President Barack Obama, included language that federally designated September 11 as a national day of service and remembrance.

Now, MyGoodDeed is focusing on the second order of business, which Jay feels is not far behind. Today, nearly 30 million Americans take time each September 11 to volunteer, support charities and perform simple good deeds as a positive tribute to those lost and injured.

This year in NYC there will be more than 2,500 volunteers at the Intrepid Sea, Air & Space Museum, preparing more than a half a million meals for food challenged New Yorkers. The food will be distributed to various food banks and food pantries, something Jay said Glenn would have been the first to sign up for.

As the organization works to transform 9/11 into a day of good instead of evil, Jay remembers Glenn as someone who was able to find the good in everything on a regular basis.

“He was the guy who would tell the owner at a restaurant what a great job the busboy did at dinner or would be the [person] to stop and help a stranger fix a flat tire. It was just his nature.”