Certain iconic artists become embedded in our consciousness as a single name. Bono, Sting and Adele are obvious examples. For Allman Brothers fans, drum freaks and connoisseurs of vintage R&B, the name Jaimoe is equally evocative.

The legendary drummer who helped propel the Allman Brothers Band to dizzying heights, achieved success, despite a youth laden with emotional minefields. Born into the segregated deep south and losing his father at age seven, were just two of the painful stressors Johnny Lee Johnson faced. Pure talent, a down to the marrow humility and a laughing-Buddha kind of magnetism allowed him to transcend those obstacles. He later catapulted to the Rock & Roll Hall of Fame and to Rolling Stone’s list of the hundred greatest drummers ever (in tandem with his fellow Allman’s drum-mate, the recently deceased, Butch Trucks). Presently, the namesake and leader of the innovative R&B-infused jazz band, Jaimoe’s Jasssz Band, continues to lay down his completely original genre-bending grooves that seamlessly straddle blues, rock and be-bop.

During his early days as a professional, Jaimoe backed several R&B greats including Percy Sledge, Sam and Dave and Otis Redding. There were many good times and a great deal of artistic satisfaction, but it was difficult to eke out a living. The Mississippi native decided that, since he was already living the life of a starving artist, he might as well do it pursuing his eternal love—jazz—in the Mecca of the art, Manhattan. The stars, however, were aligned for an epic detour. The earthly manifestation of this cosmic intervention came in the form of a demo tape given to Duane Allman during the time the guitarist was earning his reputation as a session-great in Muscle Shoals, Alabama. The only inquiry he made after listening to the recording (provided by renowned songwriter, Jackie Avery) was regarding the drummer. Jaimoe was the first member Duane asked to join the fantasy ensemble he was still only envisioning in his head. The Allman Brothers went on to revolutionize the concept of what a rock band could be. The simple and immovable fact that they were an integrated band based in Macon Georgia in 1969, proved nearly as catalytic as their unique musical sensibility. Due to Jaimoe’s presence, “the Brothers” served as both a subliminal message and a flesh and bones example of racial equality for the broader southern family. 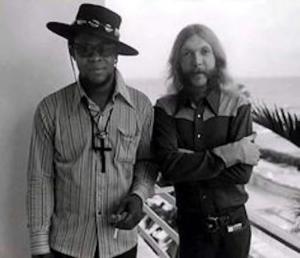 While Jaimoe’s reverence for the group is set in stone, he remains hardwired for novel musical challenges. On a break from the Allmans in the 70s, the drummer brought a dexterous funky, bop-blues edge to the pioneering fusion group Sea Level. With Jaimoe’s Jazz Band (JJB), the hand-crafted experimentation continues. The leader has assembled an outstanding posse of genre-defying musicians. JJB’s stellar lineup consists of Reggie Pittman (trumpet), Paul Lieberman (sax/flute), Kris Jensen (sax), Brian Surette (Hammond organ), Dave Stolz (bass) and the preternaturally-soulful singer/guitarist, Junior Mack. It’s an explosive band that fluidly transverses styles within a single song.

I hung out with Jaimoe and trumpeter Reggie Pittman in the backroom of the Iridium before the group’s July 12 show. (JJB is hitting the stage at Jones Beach on Sept. 24.) With the recent deaths of his bandmates and the end of the storied group, Jaimoe was introspective and reflective.

Is there something you would like to share about Gregg that may not be obvious to the casual fan?
Jaimoe: What’s not obvious is Greggory was a beautiful person. A lot of people judge people by their personal life. He was a beautiful cat.

What do you think of the fact that you and Butch (Trucks) were included as one drummer on Rolling Stone’s list of greatest drummers?
Jaimoe: Butch knew how to listen. Often what Butch played determined what I played. He was more the drum center and I was like the percussionist.

You have said that the Fillmore shows (legendary Allman Brothers concerts), which eventually became the (live) album, were both particularly great performances and typical nights. Can you expand on that?
Jaimoe: There was no shucking when you got on the stage at the Fillmore. I felt like I was coming out of my body. At a different show in Cincinnati, at Ludlow Garage, I actually did come out and watched myself playing. [Laughs]

What inspires you in terms of music?
Jaimoe: The only thing that really inspires me is old-ass rhythm and blues and be-bop.
Reggie: So you don’t listen to any new artists?
Jaimoe: I heard Chris Brown sing “Try a Little Tenderness.” Oh man, it was pretty!

Was Sea Level a necessary stop between the Allman’s and Jaimoe’s Jazz Band?
Jaimoe: Sea level is the basis of what this is.

What is your style as a band leader?
Jaimoe: Treat people the way you want to be treated. There shouldn’t be any negative anything.
Reggie: Jaimoe gives a lot of space. He encourages us to write songs. He gives us freedom which is why it is like a family.
Jaimoe: I chose these guys because they can play. [Laughs]

Can you sing?
Jaimoe: I never learned how to sing. I can imitate.
Reggie: Johnny Mathis?

You got a “Chances Are” in ya?
Jaimoe: [Croons as if possessed by Johnny Mathis.]

That was pretty damn good! Are you going to make another CD? (JJB’s last offering of original music was 2011’s Renaissance Man.)
Jaimoe: Yes. Something that swings and is hot.

Jaimoe’s Jasssz Band is playing the Laidback Fest along with Jackson Browne and Steve Winwood on Sept. 24 at Jones Beach and will be back at the Iridium on October 18. I know how much you love Manhattan, but what are your thoughts about Jones Beach?
Jaimoe: I remember lots of good gigs. I have never regretted playing music.