David Bowie said The Pixies made the most compelling music of the 80s. Bono calls them one of America’s greatest bands, and Kurt Cobain said he consciously tried to rip off their loud-quiet-loud sound. They never sold as many records as any of the aforementioned musicians, but The Pixies are the pioneers of alt-rock that inspired so many to start bands. As Nick Kivlen, the 21-year-old vocalist/guitarist for Sunflower Bean (Pixies’ opening act for the New York shows) explained: “When I was in middle school, I loved 90s alt-rockers like Nirvana and Pearl Jam. The Pixies were the cooler ones that I found a bit more challenging, and I have a lot of respect for them.”

Then there’s the song about former bassist Kim Deal (who left the band in 2013 during the recording of Indie Cindy). Current bassist Paz Lenchantin (formerly of A Perfect Circle and guitarist Joey Santiago’s side project The Martinis) suggested Francis pen a ‘thank you’ letter to Deal. He agreed, and Lenchantin sings the cathartic “All I Think About Now,” which contains guitar riffs from “Where is My Mind?” a track from 1988’s Surfer Rosa.

“When I listened to the song, I thought ‘Why not?’” said guitarist Santiago. “It’s about Kim Deal so might as well hark back to our most famous song. It was meant to be there.”

As part of the second leg of their North American Tour, the Pixies (Francis, Santiago, Lenchantin and drummer David Lovering) will return to Long Island for two dates this month with local band Sunflower Bean opening: September 22 at The Space @ The Westbury Theater and September 24 at The Capitol Theatre in Port Chester.

Santiago discussed saints, his guitar influences, new bassist Paz and background music. As for future Pixies’ music, Santiago revealed: “We’re certainly going to record again. The cat’s out of the bag. We love doing it, so we’re going to keep doing it.”

What guitarists inspired you growing up in Longmeadow, MA?
I listened to a lot of (60s Scottish singer/songwriter/guitarist) Donovan. People like Jimmy Page, John Paul Jones and Jeff Beck played guitar on his records. It was very interesting to me at the time—songs like the psychedelic “Hurdy Gurdy Man.” I went to the public library and rented a lot of records and I was amazed when I saw turntables and vinyl there. I started listening to stuff that I wouldn’t normally buy like Les Paul, Jimi Hendrix and (jazz guitarist) Wes Montgomery. I also liked the Velvet Underground and Talking Heads, but not much that was on the radio at the time…Right now I’m looking forward to hearing Tom Morello and Chuck D’s new Prophets of Rage record.

Was current bassist Paz a Pixies fan before joining the band?
She did like the band and she was listening to the old Pixies as we were recording Head Carrier. So maybe we got the spirit of the old Pixies from her…She’s very accomplished. She also plays the violin, and she can look ahead of a song and rearrange it. One time we were in a hotel with a piano and we asked if she could play. Paz said, “Oh, I’m not that good.” Then she proceeded to play (Beethoven’s) “Moonlight Sonata.” We were like, “Really? Yeah, you suck. You only know ‘Moonlight Sonata.’” 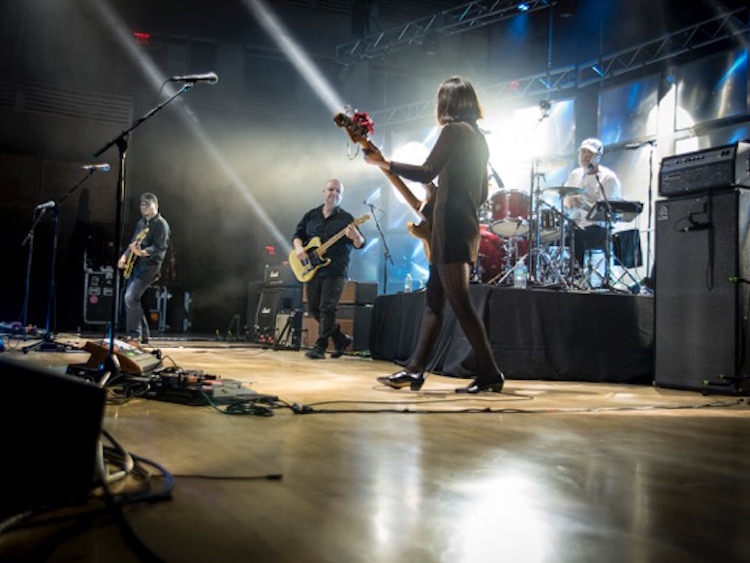 Why are there so many references to Paris and saints on Head Carrier?
We stayed at the Terrass Hotel in the Montmartre section of Paris, across the street from the graveyard where Jim Morrison, Edith Piaf and Oscar Wilde are buried. In Christian mythology, saints were sometimes martyred by being beheaded and the body and the head stayed alive for awhile. (The most famous cephalophore, or head carrier, was St. Denis who was said to have preached while carrying his head seven miles to his burial place.) Charles got the inspiration staying in that hotel because supposedly that’s where St. Denis’s journey began with his head.

What were you listening to when you were recording Head Carrier?
When we record, I want to turn off my head so if I listen to music it will be at a bar where I don’t have a choice. When I retired to my room I listened to something like (contemporary composer) Steve Reich, kinda like cool background music. And I’d go to a lot of art museums, that kind of art. I like it because it doesn’t provoke any kind of lyrics. Whatever I feel I can just feel.

Favorite song to perform live lately?
That would be “All the Saints.” I love the song and enjoy my guitar parts. It’s moody, has trills and double stops.

What do you like about playing in New York?
There’s no other place like it. It’s so exciting. Seriously, when we go over the bridge it’s like, “Ah, it’s the Metropolis.” The vibes and the audience are awesome. My brother lives there, and I get to see some old friends…We’ll be playing songs from the entire catalogue—and maybe some covers like (The Jesus and Mary Chain’s) “Head On” and Neil Young’s “Winterlong.”