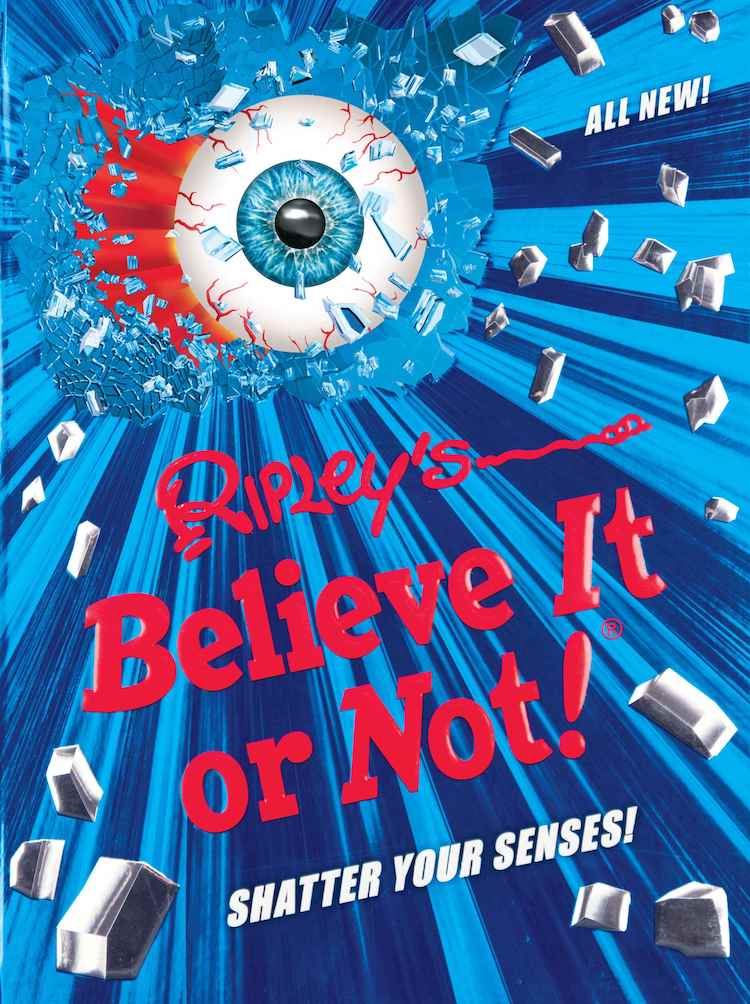 You feel as though you might need a good book to read. It’s gotta be something that sounds right, with lots of pictures and imagination-sparkers, too. A book that doesn’t stink. So here’s something to get your hands on. Maybe you’ve heard of it: “Ripley’s Believe It or Not! Shatter Your Senses.”

Sight, sound, smell, taste, touch. Though some say there are more, those are your five main senses and the writers at Ripley’s really do what they promise here: they’ll shatter all of them in this book.

First of all, you know that Ripley’s books are all in good taste, so why not take a bite out of what’s in this one? Find out why people eat the witchetty grub (yum?). Read about the Canadian man who’s traveled to more than 50 countries just to dine at McDonald’s. Or shiver at the article about blood-eating bats.

Get a whiff of this: in Guangdong Province, China, the villagers sell bags of air to tourists. Would you wear urine-powered socks? Or… imagine standing next to this: on July 5 of last year, it got so hot in New York that a pile of horse manure spontaneously caught on fire.

Stick your fingers inside this book and see double-sided cowboy boots and a repurposed statue. Take a look at a touching photo of a chicken and his monkey friend. Think about more than a dozen scorpions sitting on your arms. And if you had “an extremely rare skin disorder” like the Bangladeshi man in this book, you’d be happy to be able to touch anything!

Feast your eyes on flowers that appear to be animals. See spiders at war–if you dare! Peep amazing undersea patterns that male pufferfish make to lure the ladies. Get a load of the pink hippo, and read about the giant hamster you can actually ride.

Can emojis become songs? If Sir Paul McCartney gets ahold of them–yes! (read about it here). Find out what deadly coincidence befell rock group Jefferson Airplane. Then check out The Isolator, a sensory-deprivation device invented in the 1920s.

Five minutes. That’s all the time your teen has between school, homework, friends, sports, band practice and the thousand other things going on in his life. And yet–she still has time to read, especially if she’s got “Ripley’s Believe It or Not! Shatter Your Senses!”

The Ripley’s you loved in your childhood has been reimagined and updated for an all-new audience. There are more pictures in today’s Ripley’s books, and fewer cartoons. The feats and weirdness are more modern and less historic. Without a lot of “interactive” clutter, this book feels easier to use, too, because it doesn’t require anything but intrigue, curiosity and, sometimes, a strong stomach.

What more could a young reader want? Um, maybe something to share, because you can enjoy this book right along with your 12-to-18-year-old. You’ll both eat up. Its trippy cover is one you’ll want to touch. Yeah, “Ripley’s Believe It or Not! Shatter Your Senses!” looks good.