Picture an early modern painting with lines, circles and triangles in red, blue, black and white dancing slowly through a series of rehearsed gestures. Now imagine a minimalist work coming to life, altering its own composition right before your eyes—a straight line becoming serpentine, a star shape reversing from black to white, an ellipse transforming into a circle. This is the magic on view in Calder: Hypermobility at the Whitney Museum.

The exhibition, curated by Jay Sanders (recently appointed executive director of NY’s Artists Space) along with Greta Hartenstein and Melinda Lang, fills the entire eighth floor of the museum with 36 works. Although Calder’s sculptures and mobiles can be seen in many spaces in New York, this show offers a unique experience: handlers come through the gallery at specific times, prodding the works into action. With a push from a pole or the flip of a switch, Calder’s mobiles and mechanized tableaus come to life. The Whitney has scheduled a series of one-time presentations by the Calder Foundation, activating pieces that have been still for decades.

Graceful and spontaneous, controlled yet free, charming and whimsical but uncompromisingly modern, Calder’s mobiles, mechanized works and sculptures dance and play without diminishing their revolutionary essence. In the early 20th century, artists explored new ways of describing a frenetic world. Futurists tried to paint movement and Cubists chopped and reconfigured forms, but Calder made cut and welded metal move through actual space, rather than pictorial space. He created something never seen before—a statue that refused to stay still—and simultaneously invented a new vocabulary with which to address life.

“He was really trying to invent form and motion fundamentally,” Sanders said. “He’s almost without precedent. He’s working within the context of Marcel Duchamp and Mondrian and these radical European artists, but his medium is his own invention: form and color in motion…The activations and the movement aspect show that they’re not really sculptures. They’re these kind of perceptual triggers and the true artwork is the system that each one embodies in the form and in motion.”

Alexander Calder was born in 1898. His mother was a painter. His father and his father’s father were sculptors. From childhood, he was provided his own studio and encouraged to create. In 1919, he earned a degree in mechanical engineering. Three years later he began studies at the Art Students League, and in 1926, he was off to Paris to begin friendships and collaborations with Joan Miró, Fernand Léger and Marcel Duchamp. When asked what Calder’s kinetic sculptures should be called, Duchamp replied, “un mobile,” the word in French signifying both movement and a driving force or motivation. 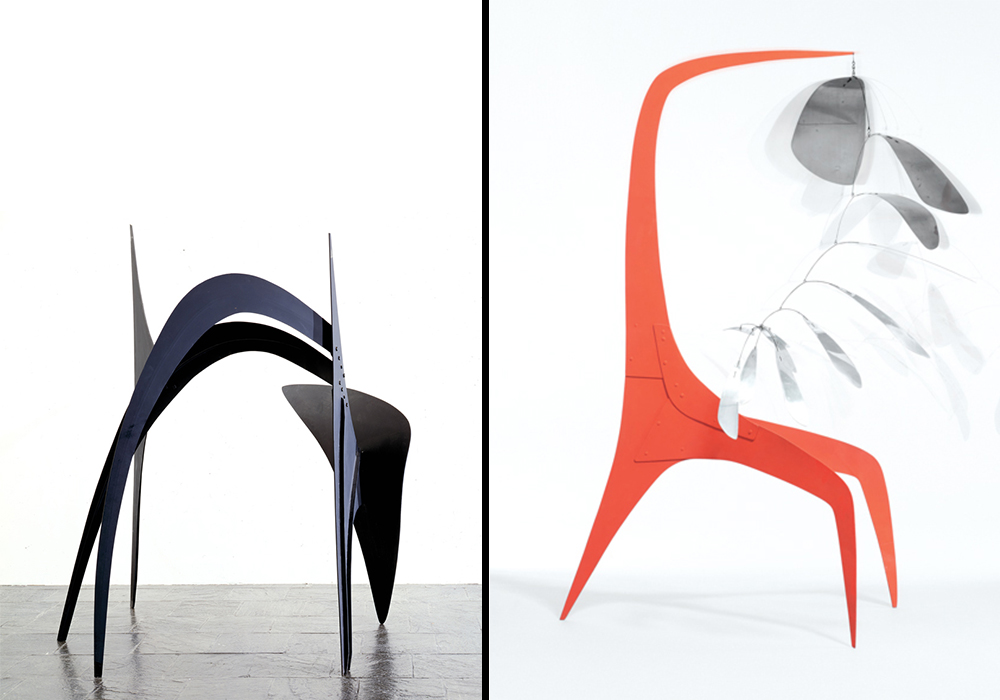 The driving force behind this exhibition, said Sandy Rower, Calder’s grandson and chairman and president of the Calder Foundation, was “installing Calder’s work the way he intended. He moved from the depiction of things to the experience of the viewer, which became the new subject.” To ensure fresh experiences, Rower is even bringing rare pieces to the Whitney, giving talks about their significance and activating them in ways audiences have never seen before. “‘Red Panel’ from 1934 had not operated since 1934,” Rower said. “I’ve known the object all my life but I’d never seen it actually move till we restored the motors…I had no idea it was going to move slower than we can perceive. That was stunning.” Its slow pace, he said, heightens its meditative quality.

Calder: Hypermobility takes full advantage of the Whitney’s new space. They’ve even knocked a hole through one wall, opening a view of “Big Red” against the city skyline. “Calder is so much a collaboration with space, with the room, the air, the social dynamic. I took that as a cue,” Sanders noted. Low platforms before vividly colored walls put the works almost in reach. “Blizzard (Roxbury Flurry)” is a mobile measuring nearly 9 x 9 feet. With several independently moving branches holding flat white circles of different sizes, it hangs, eye-level, against a dark blue wall. Stationary, it looks like a snapshot of a snowstorm against an evening sky. When activated, a swirling vortex of flakes comes to life in a way no painting ever could ever hope to capture. Each piece balances vision, movement, intent and time.

“One of the things that happens with the hanging mobiles is you look at it and it’ll be rather static,” Rower said. “You look away for second and look back and it will have moved, but be static again…but it’s clearly in a different position. You have this psychological sensation of something going on that you don’t know how to define and that’s a beautiful moment in Calder’s work.”

Along the walls, mechanized shallow boxes, like “S and Star” from 1941, hang as pictures. Sanders used these rarely exhibited works as a way to reframe Calder’s oeuvre. Behind the surface, Calder tinkered pulleys and triggers that make lines squiggle and shift, and the title character, a star, reverses to change color. If there was ever a challenge to the conventions of picture making, this is it. “‘S and Star’ is amazing. It defies logic, the way the two shapes interact, and the rhythms are kind of asynchronous, and the way the star can flip,” Sanders said. “That’s the beauty of Calder, both the technical ingenuity and the artistic daring are so matched.”

While old and young alike will leave the Whitney exhibition smiling, it’s those who give the works due time—who pause and wait for their revelations, who consider them in context of their inventiveness and the questions they pose—who will have captured some measure of Alexander Calder’s art. With their pure, modern elegance and their unique blending of the mechanical, the visual, the predetermined and the spontaneous, the random and the fixed, the hand of man and the mysteries of fate, they speak to deep issues.

“It’s hard to understand Calder even today,” Rower said. “If you look at it as some sort of choreography and ballet, that’s nice, but that’s not what it’s about.” Rather than looking for a meaning, Rower said, “if you open yourself up to the work and allow the energy to come out and communicate with you…you’re supposed to have an experience. Calder’s intent was communication and this experience back and forth where you would have some sort of revelatory epiphany.”