The curved, corrugated steel roof of East Hampton’s Arc House barely stretches above the flat landscape where the compound was carved out. It’s by design: architect Maziar Behrooz masked the residence’s sizable 6,600-square-foot floor plan by delving deep into the subterranean.

The unique composition hinged on a whim. A Portland-based couple stumbled upon thumbnail-sized drawings of an arc-shaped home Behrooz mocked up without any intent of continuing to the construction phase.

“They were just drawings, not realistic or of photographic quality,” Behrooz said. “They called me up and said we want to come to East Hampton to build this house that no one has ever built before.”

The fledging concept depended on the property’s location. The 2.5-acre lot is sited under a flight path to East Hampton airport and an airplane hangar became the prime source for turning inspiration into habitable reality. Both the homeowner and the architect were immediately seduced by the idea of a large column-less, self-supporting canopy that enclosed all the communal spaces of the house under one umbrella. The large expanse of open space was particularly opportune for showcasing the homeowner’s collection of artwork, photography and large-scale sculpture. 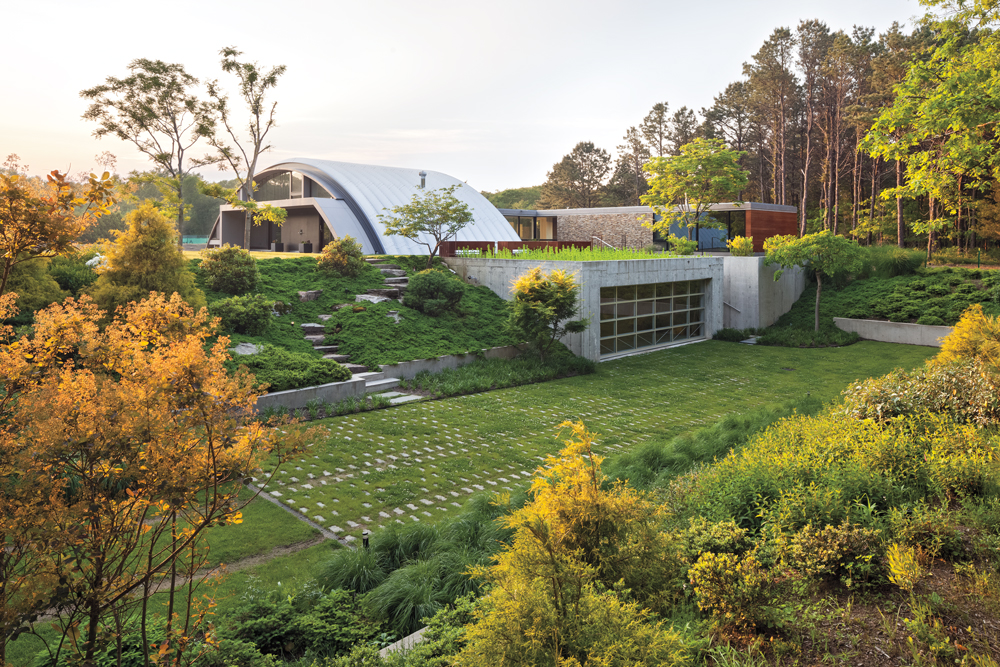 Other environmental cues further reinforced this decision. “The landscape of the East End is filled with ‘Quonset-hut’ greenhouses,” the architect explained. “I was definitely thinking about those houses…They were kind of like exploring and experimenting with different kinds of materials and shapes. We were compelled to explore more non-conventional yet efficient ways to create a single-family home.”

This approach drew from surrounding geological features to inform the structure. The marriage of the landscape with modern, minimalist architecture reflects the ethos of Behrooz and the homeowners. The architecture met the clients’ idea to “occupy the land without overwhelming it…The Arc House incorporates nature [more than] all our projects because of the landscape. We tried to make the house act like it’s working with the environment…It has earth all around it.” Grandiose façades typical of multi-million dollar Hamptons residences were foregone in exchange for excavation, essentially burying half of the home while countering the flatness of the site with a sunken courtyard and driveway. 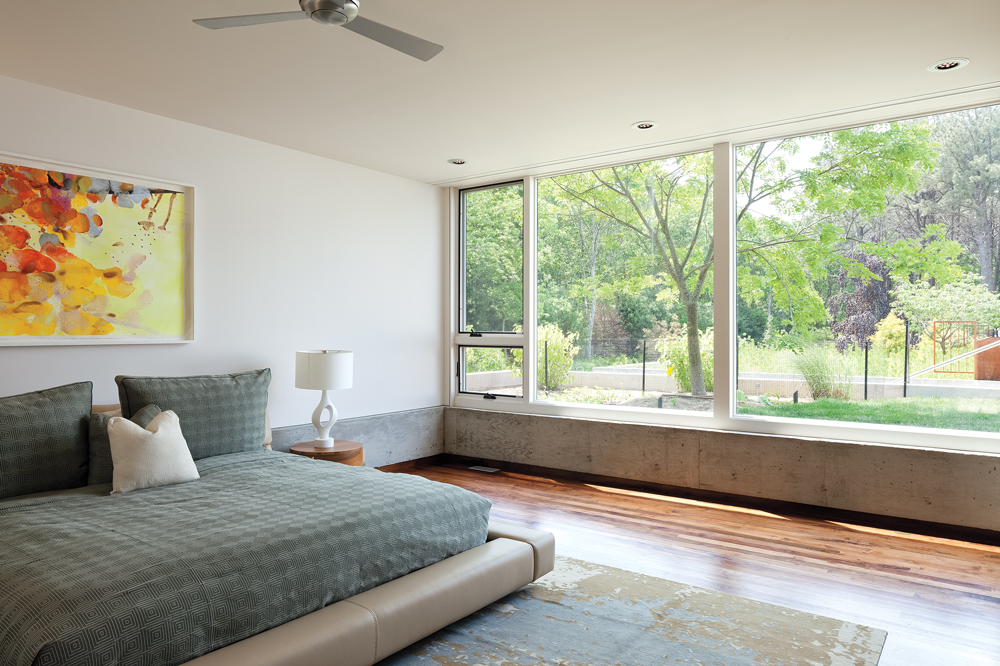 The master bedroom is accessible through a connecting bridge on the main floor. image: courtesy of MB Architecture, Adam Friedberg and Mark Roskams

The most challenging conceptual hurdle was to find a scale for the arc that would facilitate an intimate atmosphere inside the large, open footprint. “Airplane hangers are huge so the question became, ‘How do we make this into an intimate space, a space that feels comfortable?’” Behrooz  said. He calculated a radius of 39 feet with a peak ceiling height just less than half that to create the perfect balance. The dimensions are small enough to feel comfortable, yet maintain the grandeur of the uninterrupted ceiling curve. “The ceiling at the highest point is 16 feet, but quickly comes down to the ground and so you can go to each corner and the ends are cozy. One way of achieving the uninterrupted space we desired was using this method. It was a symbiotic combination of form and function working together. There are projects that the aesthetics prevail. In this case, we let the function determine the form and the form was visually pleasing.”

Guests step into the arched home through large, black exterior doors housed beneath a seven-foot entry canopy. The eye is immediately drawn to the main living area’s vast open floor plan—unmistakable is the rounded ceiling. Behrooz eschewed recessed ceiling lighting to retain the smoothness of the arch on the interior. Natural light from the glass walls and freestanding lamps illuminate the space instead. “When you have a lot of glass, the problem becomes how to manage and control the light that is coming in in order to prevent too much light,” Behrooz explained. Shading devices were built into the design plan as an intrinsic moderator. The windows have vertical fins that deflect harsh, direct rays—especially in the summer when the sun is high in the sky. The depth of the seven-foot external canopy at the front of the home also blocks direct sunlight while allowing for ambient light to shine through and brighten the space.

Walnut flooring anchors the lofty main interior that houses the living, dining and kitchen areas. This palette of black, metal and natural wood tones carries throughout the interior and exterior of the home to complement the view from all angles, whether peering in or looking out. “Instead of introducing another material or color, we thought that keeping it in that family worked well because you can see the kitchen through the front [windows]. The materials work well with the colors of the façade…It doesn’t have one monolithic facade pattern, it’s broken down.” In the kitchen, stainless steal countertops balance a translucent glass backsplash behind the cooktop as well as the black painted and lacquered wood cabinetry. The counters and other low-height components help define the flow of the space while the staircase to the lower level (partially encased by glass) provides a visual separation from the kitchen to the living and dining space. 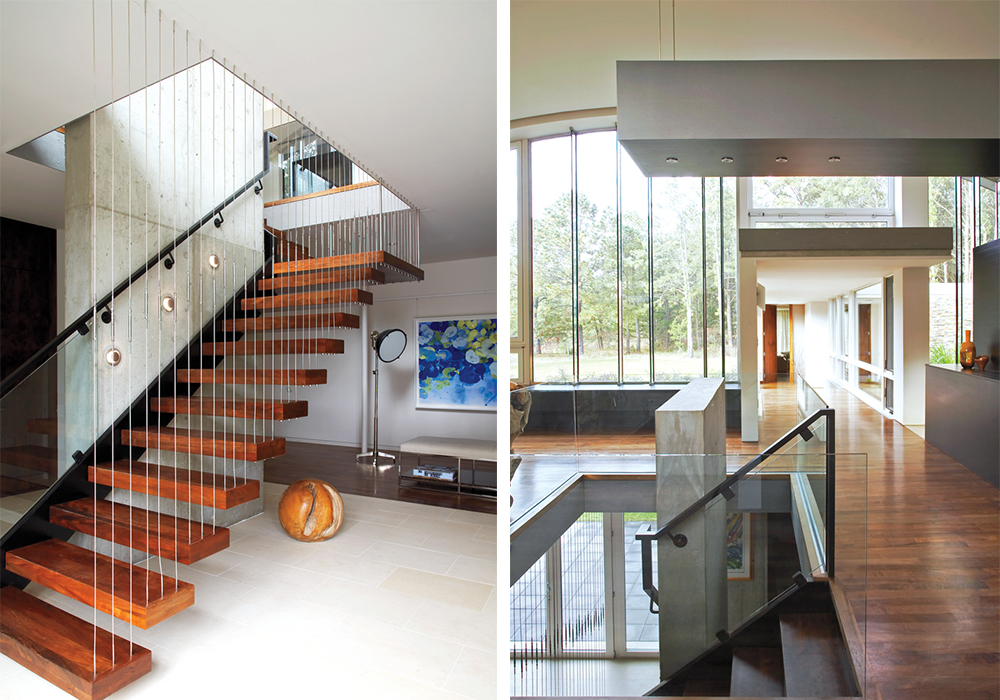 A guest bedroom and the master suite are accessed through an enclosed connecting bridge adjacent to the entry on the main level. This flat-roofed section of the upper level was constructed with structural insulated panels, or SIPS. These high-performance panels click together without traditional framing and boost the home’s energy efficiency. “It’s besides lowering cost, which is one big part of it,” Behrooz noted. “The clients, they end up having a lower energy bill…But if you can use less energy to heat and cool the house and not have to burn fuel, why not?” The panels also allowed the homeowner to easily increase the number of bedrooms should the need arise.

The submerged lower level is accessed through the main living area. A concrete wall extends slightly past the main floor to support one side of the stairway. Steel cables uphold the opposite side of the wooden steps that lead downstairs to the 3,600-square-foot underground level. An office, sitting room, guest bedroom, four-car garage, wine room, art gallery and workout area are found there.

The subterranean level could hardly be likened to a basement with 11-foot, floor-to-ceiling windows lighting the space, though it technically is. The bi-level home is surrounded by a tall canopy of pine trees that provide a natural spatial boundary, allowing the living spaces to be open without worrying about privacy concerns related to the large windows. “It’s not like we built the house and said, ‘Let’s shove it in the ground. We transformed what would have been the basement into a livable space.” 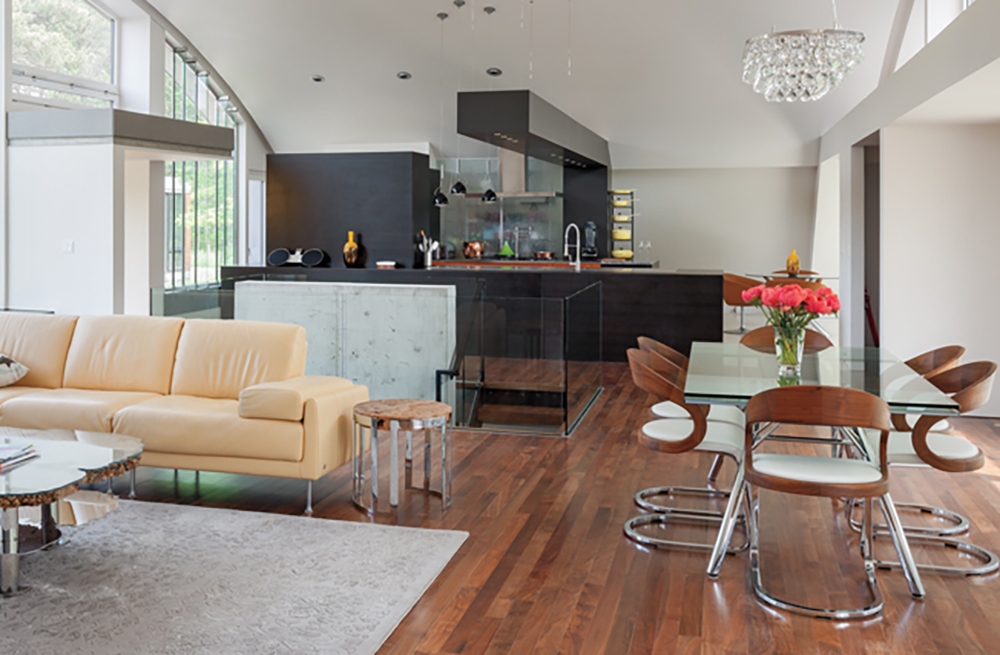 Splicing the house into the landscape also takes advantage of natural heating and cooling processes. It created a way for cool air from the lower level to be pushed up through a large stairwell and into the arched living space through convection for efficient climate control. Regulating the home’s temperature without a traditional HVAC system substantially decreased the house’s energy consumption. The energy usage of the Arc House is significantly less than a typical house of its size due to its curved shape and the materials used.

Though it is nearly all glass, the home is able to withstand variable weather because of its hurricane-proof windows. The only conventional lumber was limited to interior framing and the exterior cedar siding. The home’s ecofriendly features are rounded out with the addition of a rainwater collection system and a green roof with vegetation on top of the garage, allowing the house to be even further entwined with nature.