Manhattan vibes and hospitality have left the station and are headed towards Oyster Bay. First-time restaurateurs Claudia and Michael Taglich have teamed up with James Beard-nominated chef Jesse Schenker to open a new American Brasserie called 2 Spring in the heart of town.

Located at 2 Spring Street, the 1925 landmark building has undergone a major renovation. Casual and chic, the multi-level restaurant, which is expected to open by the end of October, will reflect the essence of mid-century dining with brick lime washed walls and tin ceilings.

“[During] mid-century Manhattan there were a lot of very wealthy people in their button-ups and pearls that would eat very classy during the week. On the weekends they would want to come to the Gold Coast and wear their sandals and polos and be casual but still want the sophistication of a great salad and a nice environment,” said Schenker, who owns The Gander in New York City. “That is basically what we are giving people.”

An early look at the menu revealed dishes like linguine and clams with pasta made in-house, bacon, shrimp and lobster mixed in an oceanic broth. There’s also a burger made with dry-aged short rib, a little brisket, some sirloin and dry-aged fat. 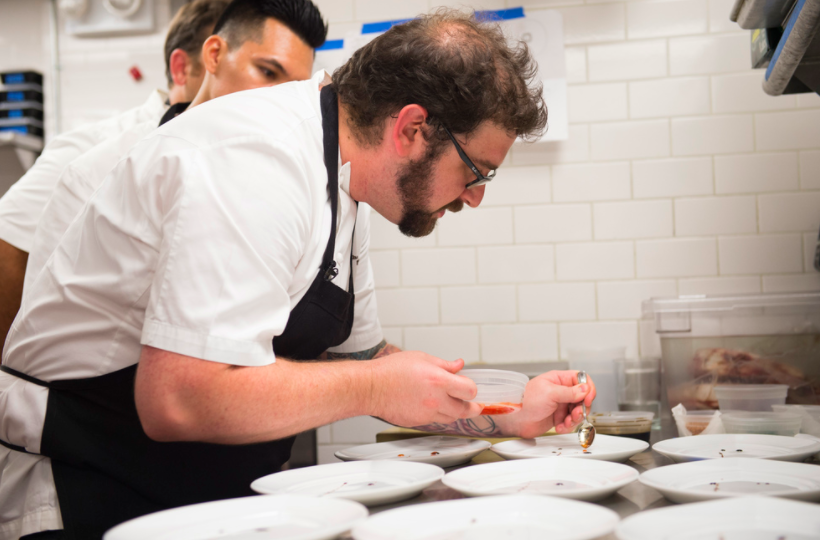 “People are going to get great food that makes them feel good and is well-executed. [We are] not rewriting the book in any way, shape or form. We are just putting out the best in its category.”

The wine program will offer hundreds of diverse selections, with a 2,500 wine cellar to boot. The selections lean heavily on French and American with some Italian, Spain and German offerings. Plus, rare cherries like Chave Hermitage and Roumier Bonnes Mares. The 10-seat, zinc top bar will feature unique beers and spirits as well as cocktails highlighting local produce. Take the B Floral, a mix of Azteca Azul Blanco Tequila, fresh lime juice, Giffard Elderflower liqueur and basil leaves.

“In the last few years, you have seen places like Osteria Leana, Authentico and Southdown Coffee. There are things that are happening…And [2 Spring] will continue to add to the growth and gentrification of the food scene in this town. It will give people a place they can call home and eat, drink and have a good time on a consistent basis.”