Listening back to 80s hair metal, it’s easy to grasp how largely one-dimensional it was. But Cinderella was one of the few bands of the era that did not merely sonically model themselves after Van Halen. Case in point, the group’s frontman Tom Keifer was quite vocal about his love of authentic blues and the Rolling Stones.

As a result, the band scored a string of radio and MTV hits, including “Shake Me,” “Nobody’s Fool” and “Gypsy Road.” Cinderella hasn’t been active in recent years, but Keifer is going strong as a solo artist. He’s gearing up for a performance at B.B. King’s Blues Club & Grill on Oct. 11, as well as a deluxe edition of his solo debut, The Way Life Goes, dropping on Oct. 20.

The rocker spoke about his upcoming project, 80s madness and his thoughts on a Cinderella reunion.

The Way Life Goes was originally issued in 2013. Why an expanded version now?
The record came out and was pretty well-received, and the label did a great job with the first single. But somewhere along the line, the record got caught up in a corporate shake-up and it ended up getting pulled down. It’s actually not been available for a couple of years. First and foremost, we just want to get the record back out. We’ve been working towards that, and we thought in the process of doing that, we’d create the deluxe edition.

How did you choose what to put on the record?
We decided to include…things that came about as a result of touring for the record, and things that were inspired during the life of the initial release and touring behind it. One of the things that came to mind immediately was our version of “A Little Help from My Friends,” which was the first creative collaboration that we did together as a band in one of our very first rehearsals. And we’ve been playing it every night on tour since, and we’ve had countless requests of people saying, “Do a studio version of that.”

The other one that came to mind to include was the duet with Lzzy Hale [of Halestorm] of “Nobody’s Fool.” That happened a lot along the tour trail for The Way Life Goes because we ended up doing some shows together. And she and I have sung that many times on stage together. It’s been really popular with fans and they’ve all been asking for a studio version of that, as well. So those were the two tracks that we decided to record, and we went in last year and recorded those. In the process of recording them, we had Tammy Vega, who has been our official photographer now, record this really cool video/documentary of us working together in the studio. It’s really like being in the studio with us. That’s one of the extras on the DVD. 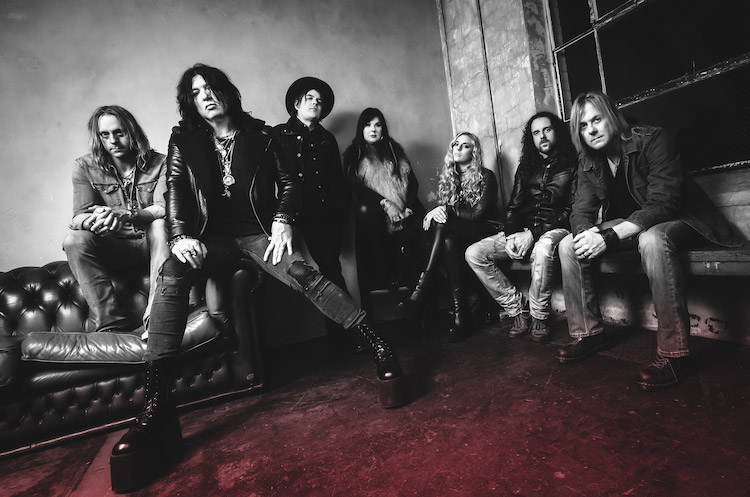 Were the 80s as wild and crazy as Behind the Music episodes make it out to be?
Not at all. That’s all a lie. [Laughs] No, it was an amazing time! I always describe it as we were in Philadelphia and South Jersey playing clubs, and we got that lucky break and it just felt like a tornado came and picked us up. The ride has been going ever since. It was a really fun, creative decade to be a part of. It continues today. The fans are so loyal, and I feel really lucky to still be able to walk out on stage and everyone is singing every word. That’s continuing with this tour with the solo band, too, so I feel very blessed for that.

You’ve experienced vocal troubles in the past. How is your voice currently?
It’s doing very well. I had a little mishap this summer and had to have surgery. I just got back on the road and did a couple of shows—my first shows in two months. I’d had that paralysis of my left vocal cord that took me years to retrain, but I’ve been singing really strong. It was just one of those nights where I pushed something a little too hard back in June. But I had surgery, recovered and now everything is good.

What can fans expect at the upcoming show at B.B. King’s?
A big, loud rock n’ roll show. We play all their favs from the Cinderella days, stuff off the new record and there’s some cover songs we do that people have been digging. Pretty much what you would expect to see from me: lots of energy, passion and sweat. That’s how we roll.

Would you ever consider a Cinderella reunion?
There’s really no talk of that at all at this point. I’m really happy with what I’m doing and I think everyone else is, too. Everyone else is off doing their own thing. I have put a lot of time into this new project, and it’s been going really well. I’m really enjoying it. I’m happy where I am.