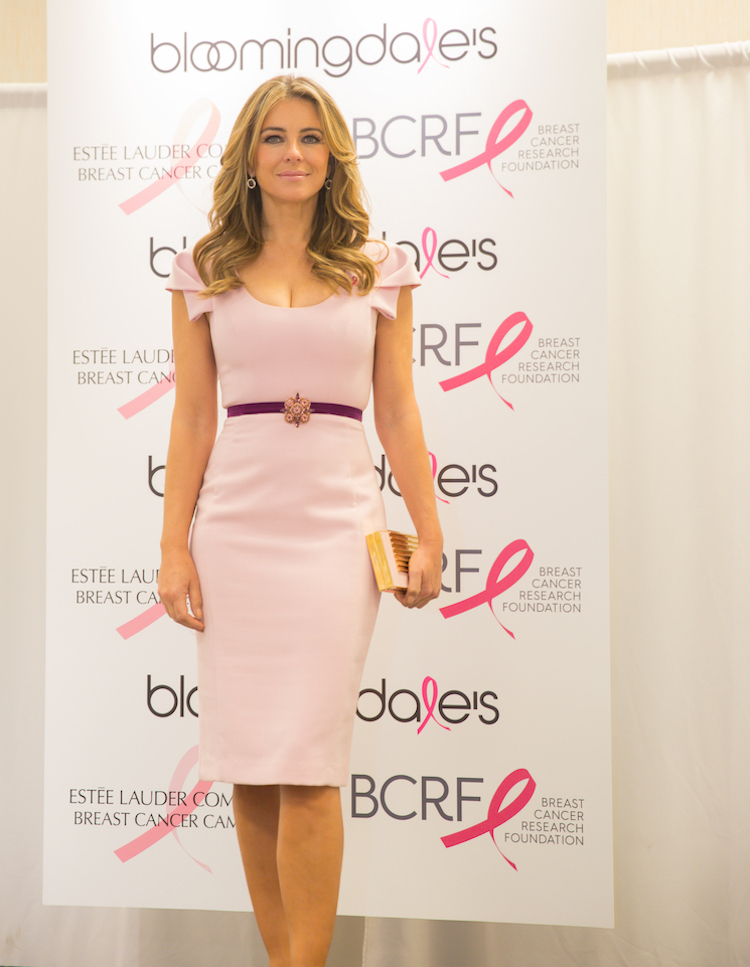 A force in front of the camera, Elizabeth Hurley has had just as much impact off-screen with the color pink. The longtime model and actress has been the global ambassador of Estée Lauder’s breast cancer campaign for over two decades—and it’s a role she’s taken very seriously.

“I’m surrounded by people who care so passionately and who have made it their life’s mission,” she said during a recent luncheon at Bloomingdale’s Roosevelt Field to kick off the company’s Pink campaign benefiting the Breast Cancer Research Foundation, the Marissa Acocella Marchetto Foundation and the Carey Foundation. “This was all inspired by Evelyn Lauder who inspired us all and was just such a phenomena herself.”

Lauder, the daughter-in-law of Estée Lauder, created the pink ribbon in 1992 with then SELF magazine’s Editor-in-Chief, Alexandra Penney. The late philanthropist asked Hurley to jump on board shortly after she became the face of Estée Lauder in 1995. Hurley, who had lost her grandmother to breast cancer around that time, immediately felt a connection. “What Evelyn said to me was that women are dying and no one is talking about it. And I thought, that was my grandmother,” said Hurley.

Since the launch of the campaign, which has raised more than $65 million, breast cancer research has seen great strides. Death rates have dropped nearly 40 percent since the late 80s, according to the American Cancer Society. New approaches and technologies have advanced treatment. But with thousands still dying from breast cancer each year (over 40,000 in the United States alone), Hurley said she’s going to continue her efforts until there’s an end.

What positive changes are you happy to see since the campaign started?
When we started there was no pink ribbon and nobody spoke about breast cancer publicly. Even people who had breast cancer were very reluctant to talk about it because it wasn’t a subject thought suitable to discuss. I know a lot about that particular thing because when Evelyn Lauder asked me to join the campaign, I had just lost my grandmother to breast cancer and she didn’t talk about it either. She died in 1992 and we knew nothing about breast cancer then. Nobody was raising funds to help people; No one was raising funds privately for research. All that has changed so that has been just an unbelievable achievement in the 25 years that we’ve been going. And now we are looking forward to a time when we don’t have to raise anymore awareness because we have a cure.

What does the pink ribbon symbolize for you today?
I think it has always symbolized hope and compassion and a togetherness to know that people aren’t alone if they are suffering, that there’s people with them and people looking out for them.

In NYC for Breast Cancer Awareness month. I am so privileged to be the Global Ambassador for the Estée Lauder Companies Breast Cancer Campaign. This is our 25th year of raising funds, awareness and inspiring action. We believe we will one day live in a breast cancer- free world. Please help us make this happen. Visit bcacampaign.com and see how you can help @bcacampaign @bcrfcure #pinkribbon25 #elcambassador 💗💗💗

Can you also talk about the documentary [Unraveling the Pink Ribbon: Creating a Breast Cancer-Free World] that just came out?
There’s a beautiful documentary on BCACampaign.com. We urge people to see this documentary which is really us talking about the changes that have happened in the last 25 years, the achievements we’ve made and our hope for the future. Evelyn Lauder features very prominently in the documentary and I’m in it a bit. There’s some survivors in it, there’s some people going through treatment. It’s so worth watching.

And what do you do for precaution?
Evelyn Lauder actually gave me my first mammogram for my 40th birthday and she made me promise her to have an annual mammogram ever since, which I have. I do that, I check my own breasts and I try to stay as healthy as I can because we know a healthy lifestyle can be linked to prevention. I try and eat well. I try and do exercise.

What do you do for exercise?
I personally don’t do any set exercise in that I don’t go to the gym three times a week. But I am extremely active in my life. I don’t sit down very much. Weekends I go for long fast walks with my dogs. I stretch a little bit every day and I do some pilates, some yoga…The important think is to keep active—walk instead of drive if you can, walk up the stairs instead of the elevator. All those very basic things.

What Estée Lauder products can people buy to support breast cancer awareness this year?
There’s many products that the Estée Lauder companies are producing to help benefit Breast Cancer Research Foundation. My favorite one is something called the Pink Ribbon Knockout Eyes Collection, which is a beauty. One hundred percent of the retail price ($35) goes to the Breast Cancer Research Foudnation so it’s a great thing to buy. It’s got a pallet of eye shadows, it’s got an eye pencil and mascara. It’s fabulous and it fits in your purse.

You wear all of it?
Yes, of course!