1 in 8 women will develop breast cancer during the course of their lifetimes. A few years ago, Taylor Basile’s mother became one of them. It was a shock but not a surprise—five generations of women in Basile’s family have had breast cancer, including her grandmother. Determined not to be the next one, Basile got tested for the BCRA1 gene. When she found out she had it—and the 80 percent chance of developing breast cancer that came along with it—she decided to become one of the first women in her family to never hear the words “you have breast cancer.” In her own words, Basile recounted her life-changing decision and what it was like to have her mother and grandmother by her side.

My dad was diagnosed with cancer in 2011 when I was a senior in high school. At first he didn’t want us to know. My younger brother and I were pretty young at the time. It was good in a way. My mom was that rock. She was by my dad’s side and just kept saying, “We’ll get through it no matter what happens.” Watching her watch him pass made me believe she could do anything.

Five weeks before he died of colon-liver cancer, she was diagnosed with breast cancer. It was obviously a hard time for me to find out she had breast cancer. It was just incredibly shocking. She made it seem like it wasn’t a big deal because of our dad’s passing. It was still tough to watch but I knew she would be OK because of the way she handles herself. She’s the strongest person I know. She was like, “Oh, I got this.” I helped out with little things around the house like cooking and cleaning. I went to all of her surgeries, including her lumpectomy. A year and a half ago she had a double mastectomy.

About two years ago, I went to the NYU Langone Health, where my mother was treated, to get tested for the BRCA1 and BRCA2 genes. I learned I had a BRCA1 mutation.

The results weren’t a surprise. We knew I had it. My mom and I had spoken about it before and what I would do when, not if, I found out. I made the decision to get a double mastectomy. It was a really easy decision. I wasn’t going to be the one to hear, “I have cancer.” I wanted to be the first one in my family to beat it.

My boyfriend Paul is a bigger nervous wreck than I am. He was like, “What does this mean? What does that mean?” He was most concerned about me going through the initial pain and going through such a huge surgery at a young age. It wasn’t about appearance. He was concerned about my future. My mom and I sat with him and discussed what would be the best options for me. He agreed because without it there wouldn’t be a future for me. 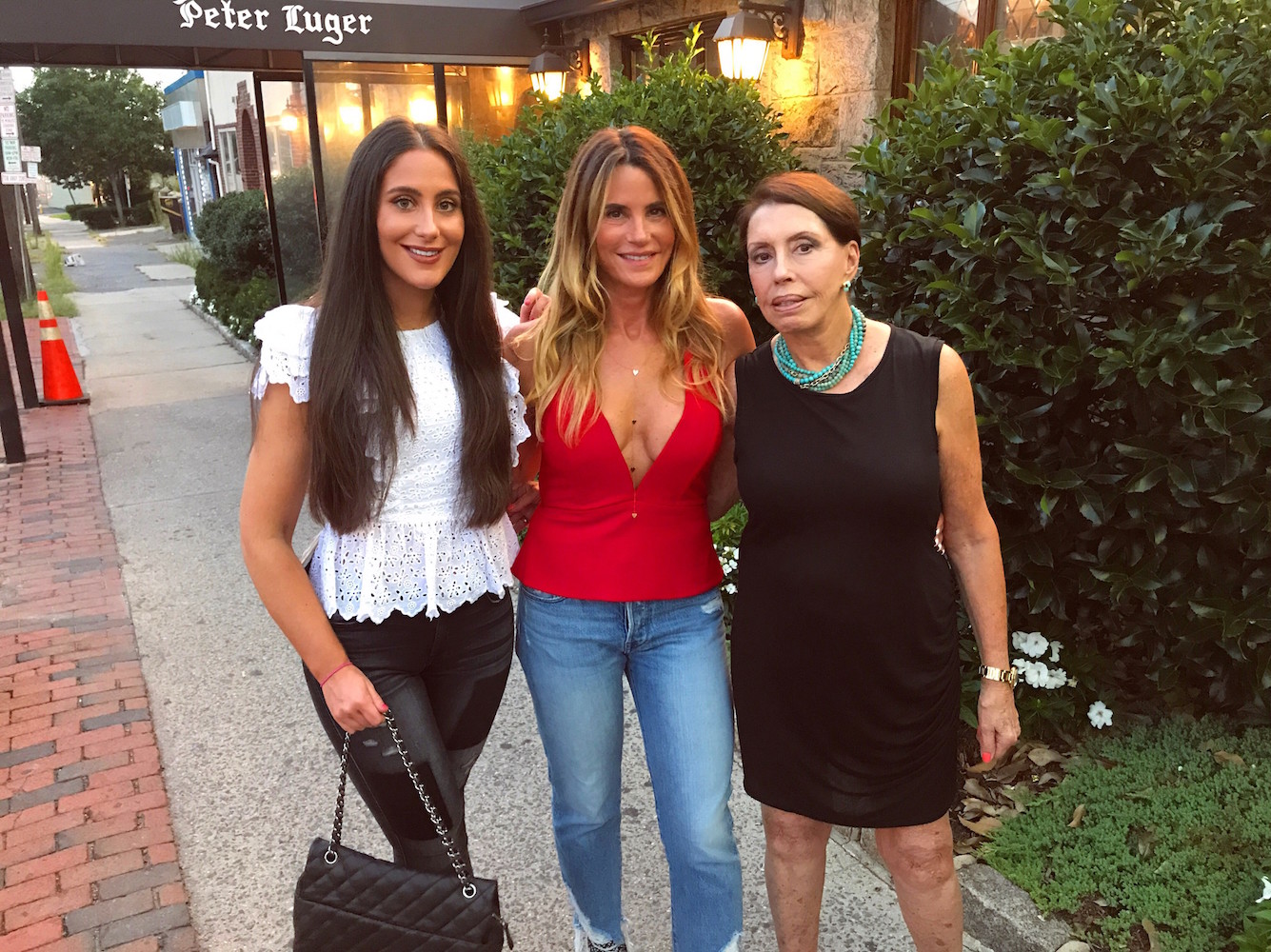 Basile’s mother (middle) and grandmother (right) both had breast cancer. They didn’t want her to ever receive the same news.

A double mastectomy is the surgical removal of both breasts. The risk of dying from one is extremely rare—1 in 200,000 cases, according to breastcancer.org. By getting a double mastectomy, Basile assured she had a 95 percent chance of never getting breast cancer. But the average age of women who have double mastectomies is 51 years old. Taylor was 24.

I had an amazing doctor, Dr. Mihye Choi. She treated my mom too. When we went to her, she explained what the surgery would entail. She said I wouldn’t be comfortable or look good for the first few months. I took that into consideration. My body is my body and I didn’t want to look all beat up but I had to do this for myself. My mom didn’t really talk too much about the downsides. She and my grandma just never wanted me to learn I had cancer. They didn’t want me to have to go through the treatment or other surgeries like a lumpectomy [a surgery that removes cancer from the breast].

Leading up to the day of my surgery, I was like, “Oh, I got this. This is going to be great.” Even my friends knew I’d be able to handle it because of everything I’ve been through, like with my dad. Some people asked, “Aren’t you nervous you’ll have scars?” I just laughed at that. I think scars tell your story.

But on July 10, 2017, the morning of my surgery, I was hysterically crying. I was nervous about how I was going to look and feel. When Dr. Choi came in, she marked me up with a marker and told me she wouldn’t go passed the lines she drew. My mom and my grandma were there and I know I’m fortunate to be able to say that. Not everyone who has a family history of breast cancer can. When I walked into the operating room, the nurses took each one of my arms. They started cracking jokes. One nurse said that if at any point I got scared I should call her name and she’d be there. She didn’t leave my side until the moment I fell asleep. The anesthesiologists always made sure I was comfortable and even gave me a screen to see where the shots were going in my back because I asked to be able to see. I remember vividly before falling asleep saying, “This is quite a party in here.” I woke up with no discomfort. I had the most amazing experience at NYU. I stayed in the hospital that night. My boyfriend stayed with me.

The morning after I started feeling discomfort. The drive home from NYC was bumpy. I was uncomfortable for about a week and then I started feeling better and more like myself. My next surgery will be for implants this October.

The odds of Basile ever hearing the words “You have breast cancer” are small but there’s still a five percent chance she will.

It doesn’t scare me. There’s always going to be a small chance of anything.

I would tell people with the BRCA1 gene to have the surgery. Do it and don’t look back. You’re out for two weeks rather than tackling breast cancer for X amount of months or years. Why not change your future and live your best life?