We may be experiencing a lull in popular music where the majority of chart-topping artists are either playing it safe or copying each other. There are luckily a handful of artists that steer away from the easy way out and opt to be bold enough to try new approaches. Queens of the Stone Age is one such band. Taking musical risks has paid off with the group’s August release, Villains (co-produced by Mark Ronson), rocketing to No. 3 on the Billboard 200. Queens leader Josh Homme chatted with me about taking chances before the band headlines Madison Square Garden on Oct. 24 with openers Royal Blood.

How did Queens come to work with Mark Ronson on Villains?
It just seemed like an idea that looked funny on paper. But the reality is he’s a music guy. He knows who is the engineer on this record and that record, and who’s the producer and where they did it. And he’s beat-centric. If it’s rock ‘n’ roll music, then you should shake hip, but not try to be too hip.

The album opener, “Feet Don’t Fail Me Now,” is a great merger of rock and dance. Early on, rock ‘n’ roll was music you could dance to…but along the way, rock and dance seemed to get separated.
It’s the blowback from punk rock. Punk rock was amazing because it said, “You can do it yourself.” And then it’s like, “but look down at your shoes and feel bad about it.” You get to play music, and you’re going to omit certain topics or things that aren’t allowed? No way. Now it’s a soundtrack to a lifetime. For me, it starts in Kyuss [Josh’s pre-QOTSA band] and it goes through Queens, and for the other guys, it goes through all their music. That’s where it should be. 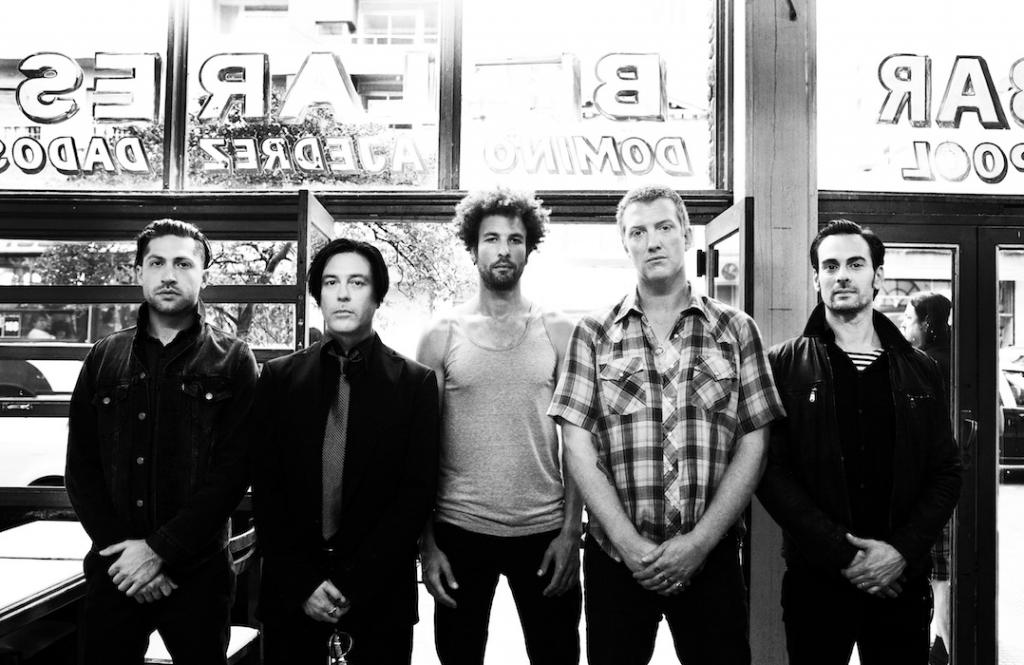 Personally, I think it sounds like not many mainstream rock bands are taking chances nowadays.
I’ve always thought this about radio. If you just played the good shit, whatever you thought was good, people would dig that. People like whatever they think is good…When downloading started and all that money went away from the business side of it, all these people left and said, “I’ll do something else.” To me what happened was people started saying, “What you need to do is do what you did last time that worked.” And that was always there—”Make a hit, kid.” Bands seem to believe that, too. Now, that’s a huge generalization.

But it seems like it’s true though.
It depends on what your yardstick for success is. For me, it’s still the same. Having any fame is only good if you want to get a table at a restaurant, and that stops for being good. And money-shmoney. When I had no money I was happy, too. And I’m happy now. I’m from the desert [Palm Desert, California]; you can’t play music for money. That just doesn’t work like that. The only thing to do is play for respect and joy and for yourself, for your name, for who you are. Represent yourself and your gang of people. And that’s the shit that I’ve held onto, and that’s what’s important to me, so taking chances is everything…Every time we take a risk, we risk losing lots of people. But that’s just the way it goes. The alternative is what, copy yourself? Follow trends, copy your influences?…And all the stuff in the world that is important to my label or something like that, that’s not important to me at all. What’s important to me is in three seconds you can tell it’s you and having someone say, “That’s my favorite shit.” This is not the place to blend in; I don’t want to blend in. Kyuss was an outsider’s thing and Queens was an outsider’s thing—that’s the point…There’s nothing to join. There are only things to be part of to try to help create something…Now that I’m a father, if I can pass one thing onto my kids is you risk nothing, you get nothing. If you’re not willing to sacrifice something, there’s nothing there. That’s why people don’t appreciate what they get for free, because they did nothing to earn it.