We are living in the age of culinary one-upmanship. Whatever you can make, I can make better…and add pork belly to. It has undoubtedly created a wonderful time for foodies to be alive. Yet we never cease to return to the classics—foods that have never done us wrong. It is easy to believe that simple equates to easy (read: less worthy). But contrarily, as any two-minute Beatles song will attest, there is a beauty in simplicity. With no place to hide, each ingredient and technique must reach a level of perfection. Three local culinary craftsmen have spent years perfecting the “simplicity” that goes into making Long Island’s staples: pasta, pizza and bagels. In the ultimate rebuttal to the age of culinary one-upmanship, these fan favorites don’t include much more than two of the most basic ingredients: flour and water. They are beloved for the flavor, familiarity and quality derived from true craftsmanship. Not so simple after all. 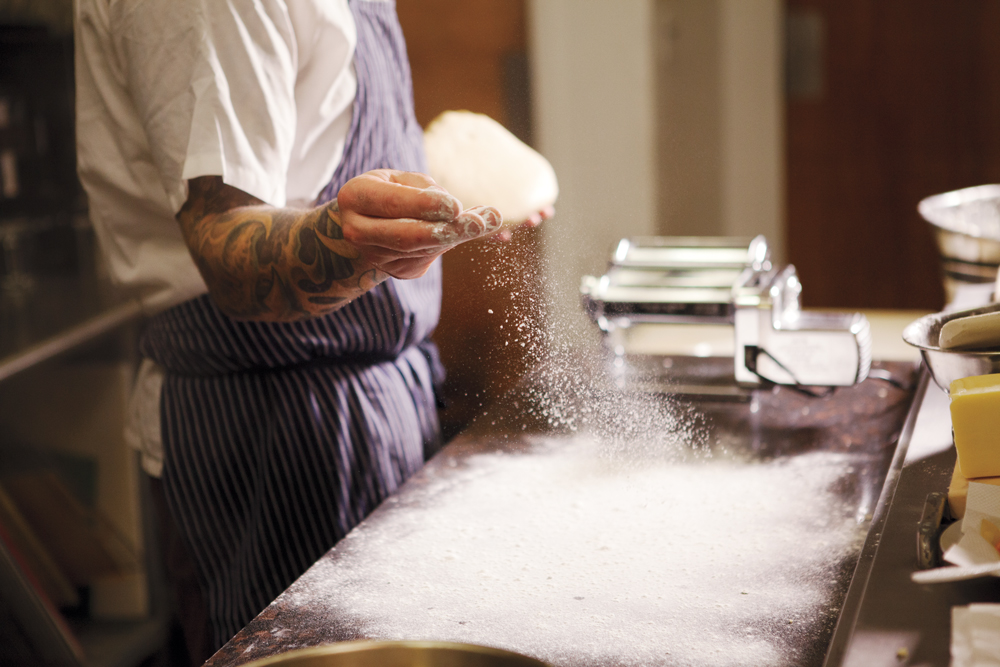 Not all pasta dough is created equally. One minor deviation in ingredient or process can create a completely new product. It takes a seasoned chef to know the perfect pasta needed to complement a dish.

James Ahearn, executive chef at Verde Wine Bar & Ristorante, is one of these experts. His menu consists of three categories of pastas: fresh, dried and egg. “A fresh pasta would be like the ravioli, you don’t get an al dente chew out of it. It’s just softer. It cooks quicker, it was never dried so the moisture retains and you’re not going to get that crunch of al dente.” Ahearn uses dried pasta when he wants a firmer texture and also adds egg to the flour mixture accordingly. “With an egg pasta, you’d get the crunch, the al dente out of it, but it’d be much lighter on the palette. We use that in the garganelli and the fettuccini, those are our vegetarian dishes.”

The first step is choosing the type of pasta that’s being made. “First you have to source your ingredients. It depends on what type of dough you’re making, what application it’ll be used for.” Ahearn uses two types of flour: triple flour and high-gluten. The high-gluten flour provides that al dente chew he looks for in some of his dishes. 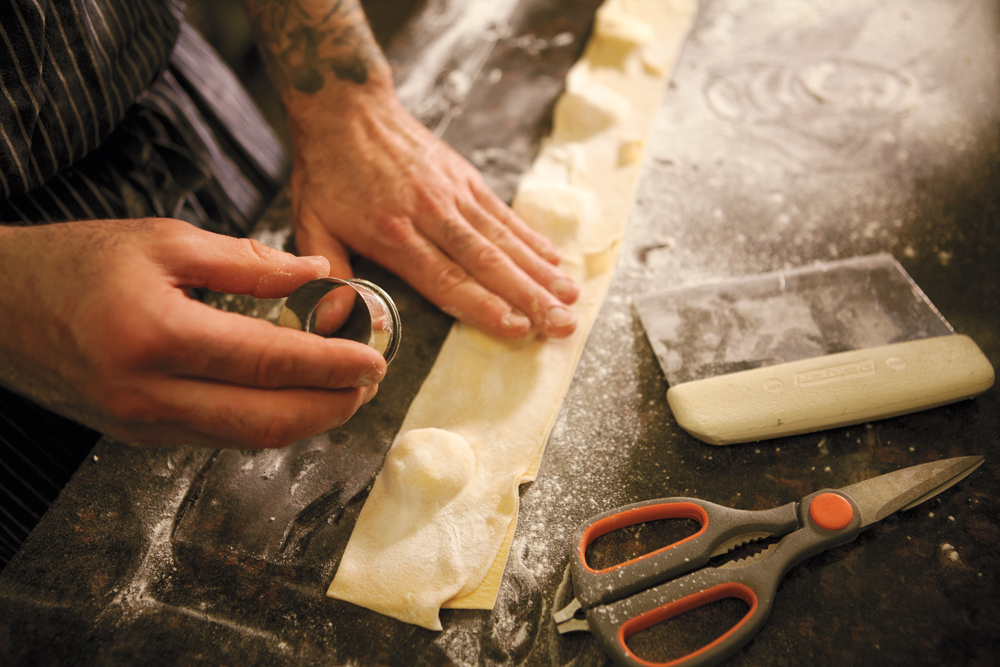 When kneading the dough to the right consistency, density is key. “If you’re going to dry the pasta, you’re going to look for something more dense. If you’re looking for a fresh pasta, you want something with a lighter consistency, something with no moisture in it.” (For light-as-air flourless pasta, whet your appetite with a few of our 17 Things to Eat Right Now on page 96). Ahearn then runs the dough through a machine to cut it. “It’s simple but if you mix up the steps or the density is off, then the pasta is off. It’s not an exact science but it’s a precise technique.”

The real trick is not in the making of pasta, Ahearn said, but the cooking. “The hardest part is cooking pasta properly. The biggest problem for home cooks is that they’re overcooking pasta and under salting the water…You should always taste the pasta. You spend so much time working on it, you want to be able to taste it.” 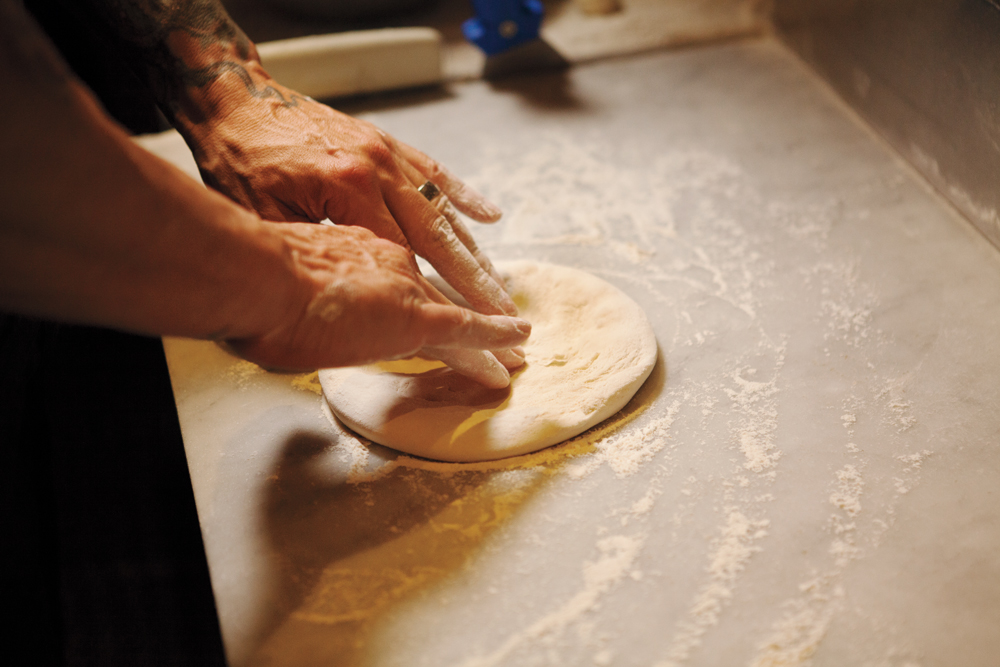 Jason Brunetti’s first lesson in pizza making was a 4am class in a Florida pizzeria. “I begged [the owner] to make me his apprentice and finally he said, ‘You want to learn how to make pizza? Be here tomorrow at 4am. That’s what time I make the dough.’ I showed up, the lights were off, it was just him at the counter with two espresso cups. That was it. I trained with him for a few months and got the basic fundamentals.” This is where he learned to make the Neapolitan-style pizzas served at both Brunetti Pizza locations in Westhampton and Manhattan, to widespread acclaim.

It all starts with the dough: a combination of flour, water, yeast and salt. Once mixed, it needs time to rise. “We ferment the dough for 48 hours. It’s called a two-stage rise.” First the dough is left to rest in room temperature. This allows the yeast to digest the sugar and starches, releasing carbon dioxide that causes the dough to rise. “The next day we cut the dough up and roll it into balls.” Then it goes into the walk-in refrigerator for another 24 hours, which slows the process down. 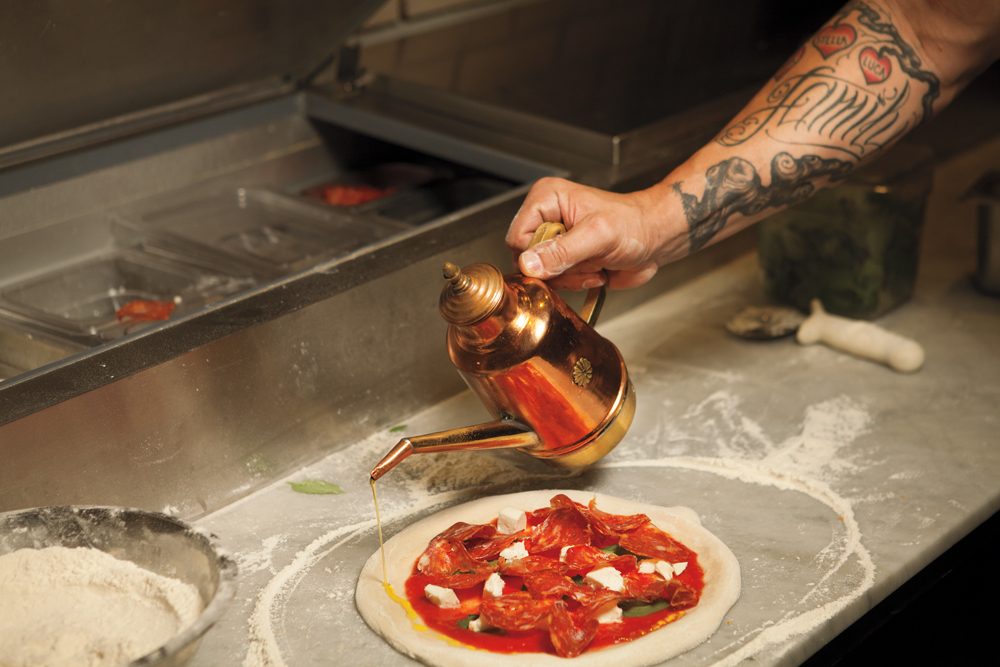 “At that point, it has plenty of moisture, it’s got some elasticity to it.” To open the dough, Brunetti starts by applying pressure at the middle and pushing outward. “You’re pushing all the air from the middle of the dough to the crust. We like to have fluffy, airy crust and a very thin middle.” Then Brunetti slides his hands in a circular motion, slowly stretching the pizza to a desired size and evenness. “That’s the key—to open the dough evenly. You don’t want to have one spot thick, one spot you can see through, because that’s going to burn and make a hole.”

When it comes to toppings, Brunetti believes in quality ingredients handmade in-house. His sauce is simply San Marzano tomatoes run through a food mill. “The ingredients are what separate us from everybody else. I make my own mozzarella. I make my own burrata. We make the cheese the way we want it—not too much water so it doesn’t make the pizza soggy.”

Brunetti is vigilant in keeping his toppings to a minimum, allowing each to shine. “The key is not to overpower the pizza because you still want to be able to taste the dough. You don’t want to put a ton of toppings on and lose the flavor. It’s about balance. I see a lot of people make pizza that is very unbalanced.”

The pizza makes a stop in a 900-degree, wood-burning oven before being served to customers. 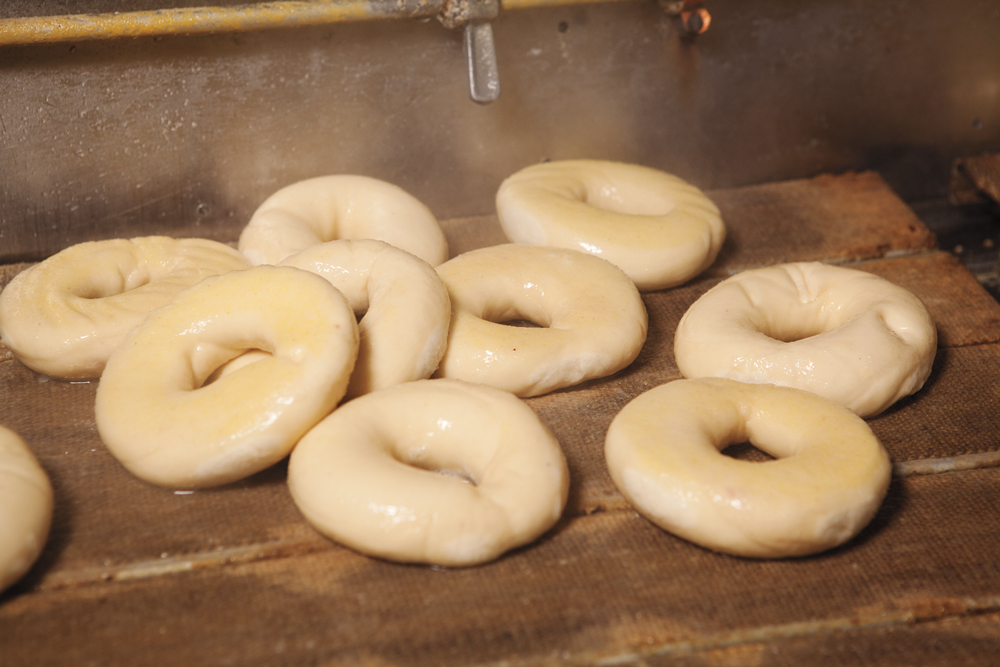 You could say that Gregory Scolieri was born to be in the bagel business. His parents opened A&S Bagels in 1986 when his baker father believed bagels were the up-and-coming thing—a keen intuition. As a teenager, the younger Scolieri began working at A&S, where he remains today. He’s witnessed the store grow into a 24-hour bagel factory, making and selling bagels both in their retail store and wholesale to other bakeries and shops across Long Island and New York City.

A&S makes thousands of bagels each day. As the demand indicates, clearly they’ve mastered the formula for perfection. Scolieri creates the dough by combining flour, sugar, water, yeast and other ingredients depending on the type of bagel being made. “You have to mix the dough. Our mixers are from the 1950s, we do it the old-fashioned way.” The dough is then made into the shape of a bagel using custom machines. Afterward, they are refrigerated for 24-36 hours during the fermentation stage. 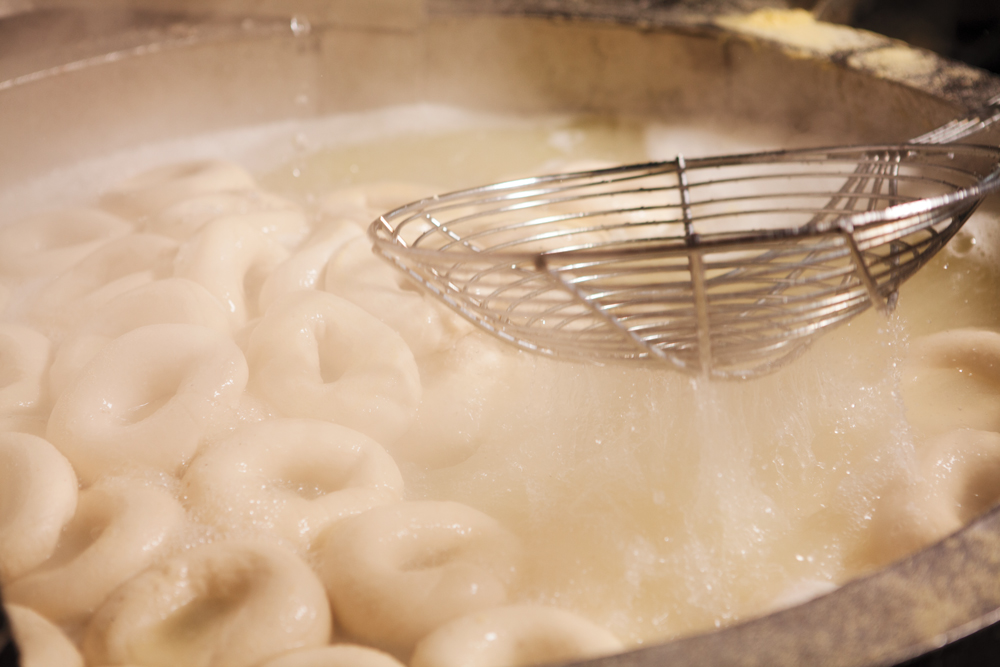 Then comes the most crucial step in making a quintessential New York bagel: boiling. “It creates the crust of the bagel. If a roll isn’t boiled, it won’t have the crust. The longer it’s boiled the more shine you’ll get to the bagel, the thicker the crust, the chewier the inside.” After a dip in the bath, the seeds are applied (if necessary) and put into the oven. A&S’s cook time is a trade secret but “most bagel stores set times anywhere from 30 seconds to about three minutes depending on what kind of bagel you’re looking for.”

Doing this for 30 years has allowed Scolieri and A&S to perfect their processes. But their secret isn’t found in a recipe or an ingredient. Instead, it’s about the process. “We have someone watching the product from beginning to end, that makes the difference. Each stage you need someone to watch. Someone to make sure it’s refrigerated at the perfect temperature, fermented for the perfect time, take it out at the right time, boil it, bake it. You have to have your eyes on the product. We’re always here 24 hours a day, seven days a week, watching our product. The consistency of doing it day in and day out makes a big difference.”