“Louis took me to my senior prom when I was sixteen,” Susan Meisel said. “I got engaged to him when I was about seventeen and got married to him about two weeks before my eighteenth birthday.” You could end the story there, since it’s the foundation of the lives she and her husband have built. But foundations are enhanced by architecture and design, art and music, collections and endeavors—the fine finishes. And the fine finishes of the world of Louis and Susan Meisel are too alluring to resist a peek. Realizing that, they’ve been inviting others to share those pleasures for decades.

Dozens of paintings from their private collection form the core of From Lens to Eye to Hand: Photorealism 1969 to Today currently on view at the Parrish Art Museum. The eponymous Louis K. Meisel Gallery in SoHo is open to the public year-round, exhibiting the best known American and international photorealist painters. The Salon Series of concerts at the Parrish, which the Meisels substantially support, took place this fall. And as the leaves turn the East End landscape into the best show in town, Louis said the “whole world,” is welcome to enjoy their Sagaponack Sculpture Field on Wilkes Lane, filled with world-class works of art and beech trees.

Related Content
Moving the Needle at the Jewish Museum

Get him talking about trees and a window into the couple that’s been together for 51 years opens. “I collect beech trees,” Louis explained. “I have about 35 species…Why beech trees? They’ve got a root structure that does not allow them to be blown over. They don’t break like other trees do and they’re beautiful.” Collecting, deep roots and aesthetics are the couple’s defining forces.

Artists, collectors and gallerists are just some of the roles the Meisels have stepped into over the years. Depending on where one hops onto Louis’ narrative, it all started with renowned gallerist Leo Castelli, or abstract expressionist painter Theodoros Stamos, or Lou’s high school buddy Larry, or his parents. 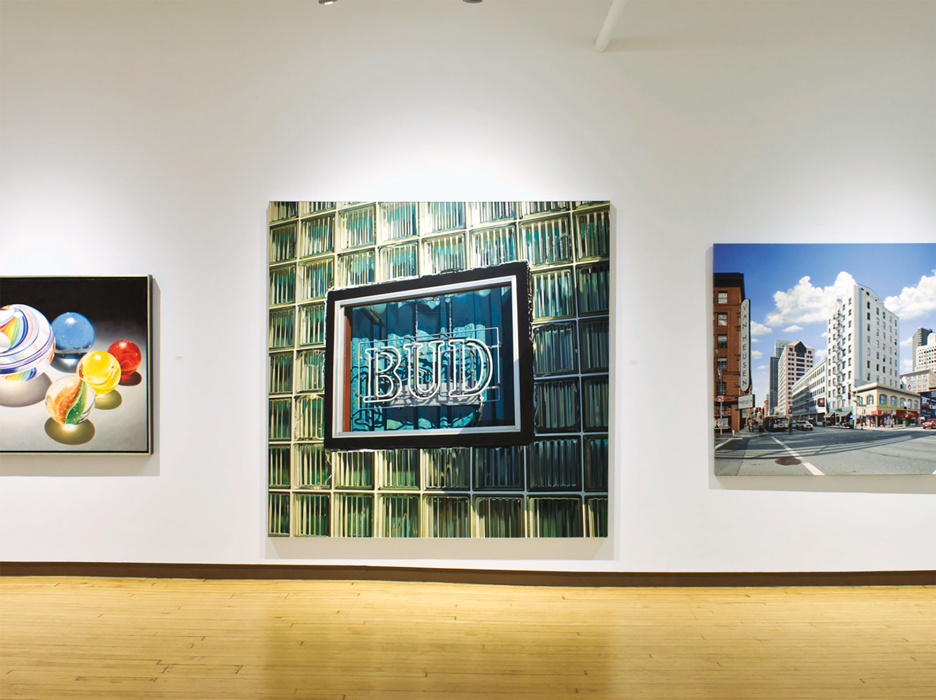 “I’ve somehow been a collector all my life. Right now we have over 150 different collections. I remember when I was four or five years old going to antique shops with my parents.” At 14, he and pal Larry took the train from Brooklyn to the Museum of Modern Art, where works by artists like Pollock and Rothko overwhelmed him. “Aside from the art, what also got my attention were these beatnik girls. These sexy looking girls sitting out in the courtyard doing drawings.” Meisel was hooked. Within a few years, he was a regular at the Cedar Tavern where the ab-ex painters hung out. That led to him sweeping floors, cleaning brushes and stretching canvas for Stamos, from whom he bought his first painting for a small down payment plus $5 a week. It wasn’t long before he’d sold his first painting, also a Stamos.

The Meisels’ life in music has paralleled their lives in art. Louis was trained in classical piano from age five and gave his first recital in Steinway Hall on 57th Street at eight. For decades, the duo has sponsored concerts and salons in their SoHo loft and more recently at the Parrish. Susan is involved with an organization that provides ballet equipment to the handicapped and Louis is the vice chairman of the Concert Artists Guild.

But nothing defines the Meisels more than their involvement with photorealist art. Meisel gave many of the movement’s artists their start and bestowed on the movement its name when a critic, in 1969, asked him what these paintings were. Since then, he’s organized, assisted and promoted over 250 photorealist exhibitions worldwide.

One of the most sweeping and compelling introductions to the genre is From Lens to Eye to Hand. The Parrish’s exhibit is composed of nearly 75 works by 35 artists including both first and subsequent generation painters such as Chuck Close, Audrey Flack, Robert Bechtle, Richard Estes, Charles Bell, Tom Blackwell and Anthony Brunelli. It’s curated by museum director Terrie Sultan, who took the project under her wing despite the demands of running the Parrish.

“This was something that was quite dear to my heart, I wanted to do it myself,” Sultan said. The show had been gestating for more than five years, “but it really didn’t jell for me until about three years ago when I was at the home of Susan and Louis,” she explained. “In their home was a room that was hung floor to ceiling with very small, most exquisite watercolors…I was absolutely blown away by the beauty and the luminosity and the intimacy of these works…It was at that point that I said to myself, ‘these have to get out. They have to be seen.’”

The Parrish is particularly suited for the exhibition. Not only do several of the featured artists have ties to Long Island, but the assortment also expresses the museum’s personality. “Something we’re really dedicated to is taking second looks at works by artists or groups of artists that have not received the scholarly investigation or recognition that’s deserved,” Sultan stated. Photorealists fit the criteria. 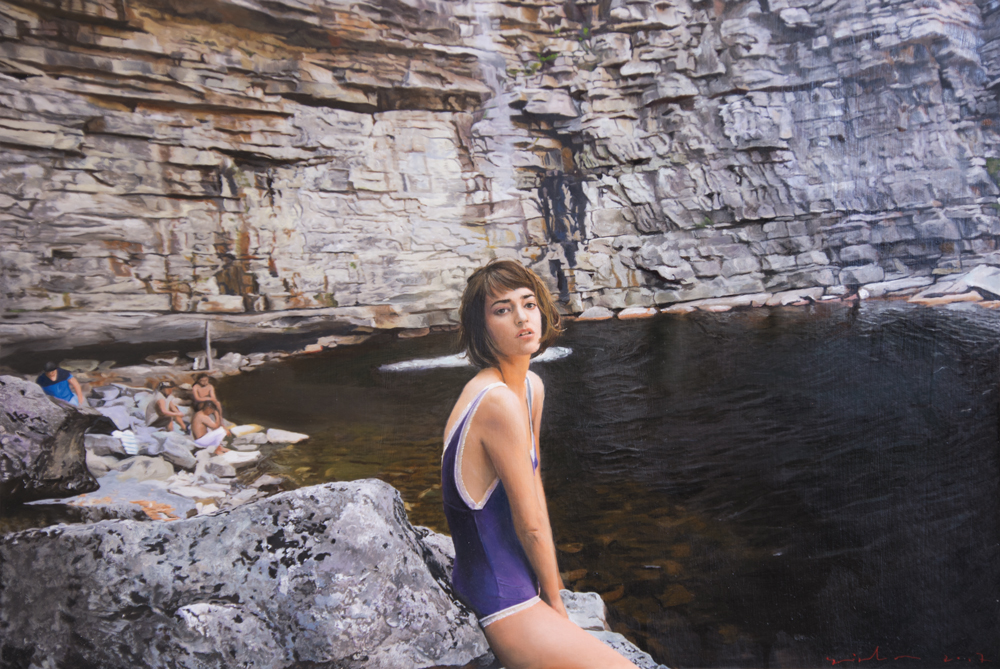 After taking snapshots or digital images of everyday subjects like food, motorcycles and storefronts, the artists blow them up, then trace or project images onto canvas or paper and turn them into intricate paintings. Some capture entire cities, others just a few shiny apples or the hood of a car and the visual magic that occurs when light hits curved, highly polished metal.

“People, for a long time thought, ‘Well they’re just projecting images from slides and then coloring it in,’ which isn’t true. If you get up close to any of these pictures, you see the hand of the artist very, very clearly. But it’s nowhere more evident than in these little watercolors that are so unforgiving,” Sultan said. “The skill that’s required is kind of beyond beyond. And that’s what really did it for me.”

As the Impressionists did 100 years earlier, today’s photorealists seek to capture the visual experience of a fleeting speck of time. By focusing on a moment of reality and avoiding emotional articulation, they present a Haiku-like revelation: Here’s what life looked like at this place on this day.

In Charles Bell’s “Tropic Nights” the convincing shimmer off a chrome pinball breaks down into tiny dashes of color up close, as does the holiday tinsel on a forlorn storefront in a small work on paper by Richard Estes. But from a distance, they’re picture perfect. The technical prowess of the works in the show is undeniable and at times breathtaking. If these were nothing more than displays of technique, they wouldn’t have passed the test of time. The art resides in the way the painter infused a meticulously rendered reality with deeper meaning. 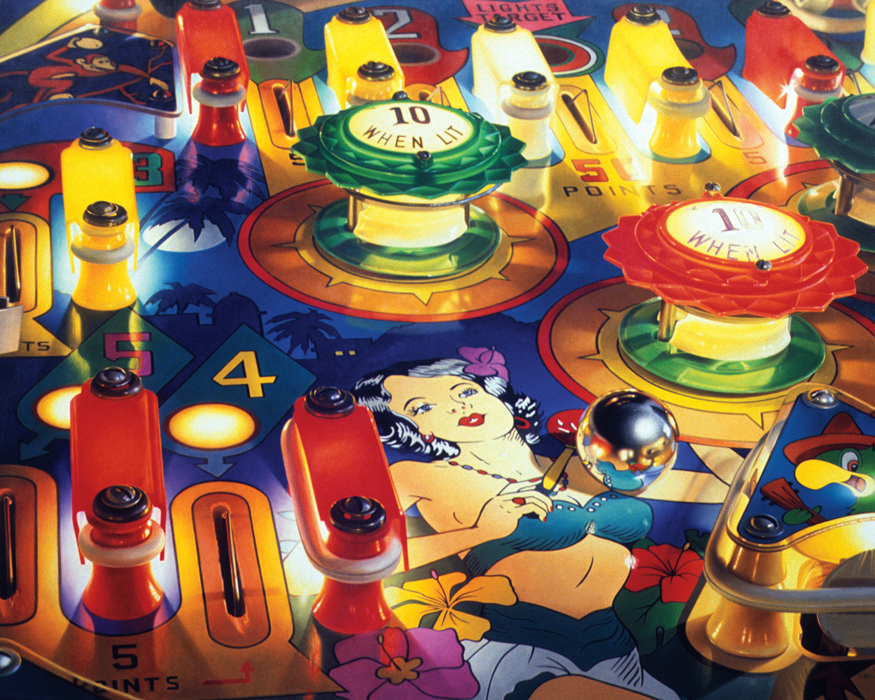 Audrey Flack’s “Wheel of Fortune” creates a dialogue with earlier eras. Here, she employs themes of Northern European Baroque Vanitas paintings, in which the objects reminded viewers of the fleeting nature of life and consequent spiritual implications. Flack presents an altar-like scene of a skull, candle, some food and trinkets. Personal photos, shiny beads and a lipstick join more universal symbols like a tarot card, calendar, dice and mirrors to create a complex tableau of iconography and meaning. It’s all framed by a draped curtain, Vermeer-style, and compressed into flat space. It’s modern, archaic, general and specific, communicatory and mysterious all at once.

“The job of an artist is to get the viewer to slow down and to really spend the time it takes to apprehend what the artist is trying to tell you. There’s no way that you can look at that picture for four seconds and understand what’s going on,” Sultan said. “They provide you with a way of spending some really great time looking at something that’s going to reward you ten times over every time you look.”

Photorealist paintings can take years to complete. They’re about precision, discipline and time, all to capture a moment. But is it really a moment or an artist’s illusion? Raphaella Spence’s 2012 painting “Flamingo” recreates the eye-popping fluorescence of Las Vegas. The composition is roughly divided in half. The bottom portrays the city in all its artificiality. In the distance, purple mountains are topped by a gash of crimson and magenta clouds. The gaudy colors of the city are literally topped by garish tones created by nature.

“The meaning comes from the artist’s hand,” Sultan explained. “Any time somebody allows you to see something that you can’t see for yourself, it can be an absolutely life-changing experience…What these artists have created is a level of beauty in describing things that other people can’t see that is transcendent. I know it sounds kind of crazy to say that you can be standing in front of Charles Bell’s ‘Gum Ball No. 10: ‘Sugar Daddy’ and have a transcendent experience, but I would defy you not to have an experience like that when you see this picture.”

No one understands that better than the Meisels, whose collection numbers in the thousands (most, they say, will go to museums eventually). They lent more than half of the works in From Lens to Eye to Hand to the Parrish for the exhibition. It goes beyond art and beyond the passion of collecting. For the Meisels, photorealism is deeply personal. “Susan is like the mother to photorealism. All of the artists, whether they’re older, younger, male or female, she is Mama,” Louis said. “And I do my thing.” Feeding, encouraging, supporting and promoting, as Theo did for his brother Vincent van Gogh, or buying wet canvases right off the easel, as Gertrude Stein did with Picasso, are among the ways the Meisels have nurtured artists throughout their careers.

“I like to think that a lot of those famous art dealers in history, I have a little bit of that,” Louis said. “It’s not a matter of making money. It has to do with legacy and art history…If you leave me alone to do what I’m doing to make my life a lot of fun, all the people around me will benefit and go along with me. So I say to the artists, ‘Your job is to make the art. My job is to make the history.’”