It had to happen eventually. While its extinction is not dinosaur-inevitable, the decline of the sedan and rise of the SUV might best be told as a tale of natural selection. That selection assures survival of the most capable species. Today’s SUV and crossover class of vehicles offer greater functionality and as much sport as versatile sedans or station wagons. Yet they are more. The best SUVs are luxurious machines, built to perform with power and handling to rival some of the sportiest GTs.

Back in the automotive Stone Age, (decades before the moniker had been invented) vehicles that are now called SUVs started life as trucks. These are the days when the Willys Jeepster or Land Rover Defender crawled out of a swamp. The SUV quickly evolved. Even Cadillac had one in its arsenal by the turn of the millennium. When Porsche released their heretical Cayenne in 2002 (the company’s first off-road vehicle since its 1950s tractors), faithful Porsche 911 owners nearly rioted. Naysayers pessimistically proclaimed the end of the world was nigh. Not only did the Cayenne catapult Porsche into the 21st century (essentially assuring the company’s success) it has also consistently outsold all other Porsche models…until now.

When it was introduced in 2014 the Macan was an answer to a question Porsche enthusiasts begged: can the company make a smaller SUV that checks all the “sport” boxes while delivering an extra dose of Porsche excitement? The little Macan was popular from the start. During the first half of the year, 11,000 of the 28,000 new Porsche vehicles sold in the United States were Macans.

Most luxurious, high-performance SUVs are undeniably big machines. The Cayenne Turbo S (soon to be released in its third-generation next year) and the BMW X5 M are the most sporty of the bunch. The Range Rover Autobiography and Bentley Bentayga tout quilted luxury and refined power. Jeep’s Grand Cherokee Trackhawk (with a whopping 707 hp) is for drivers who define “hauling” differently than normal folks. And Cadillac, Lincoln, Lexus and Infiniti all weigh in with full-sized luxury models (emphasis on weigh). 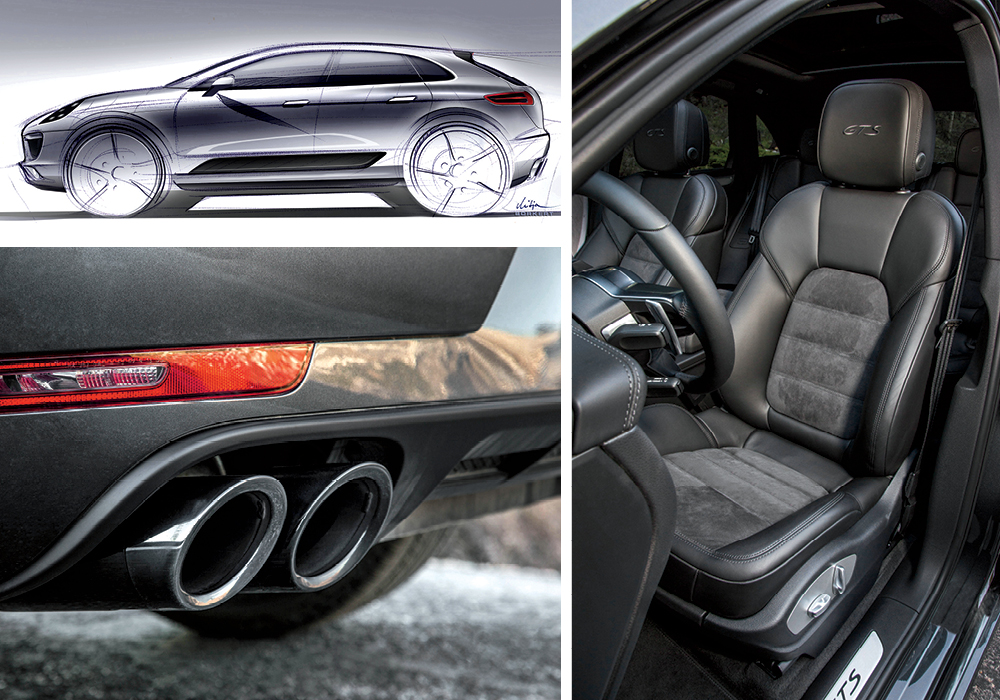 Even the exhaust note is tuned for superior performance.

The unalterable laws of physics mean that greater size and a higher center of gravity conspire against even the most powerful SUVs. It’s here that the Macan shines. This is an SUV with a more tailored cut, a sportier stance, a smaller footprint and a more human scale. The Macan balances sport and utility without compromising one chromosome of Porsche DNA when it comes to feeling like a Porsche. And just when the Macan Turbo seemed to deliver all the goods, Porsche released an even higher-performance version, rather prosaically called the Macan Turbo with Performance Package. Why Porsche thought it unwise to append a simple suffix like S or even PP remains a mystery. But by any name, the feistiest Macan is a winner that packs a serious punch.

A brilliant twin-turbo, 3.6-liter V-6 engine powers this next generation Macan. It delivers 40hp more than the original 400hp Macan Turbo and 442 lb-ft of torque available in the standard-issue Sport Chrono Package kicks the back of your seat. Calibration of chassis, engine and transmission—even the exhaust note—is tuned for optimum performance. Shift times through the seven-speed PDK dual-clutch transmission are shortened as well, regardless of using paddles or in auto-shift mode.

While it’s doubtful many Macans will be pressed into serious off-road duty, it certainly can handle the terrain. Porsche Traction Management’s active all-wheel drive and height-adjustable air suspension tailor the ride and handling response for the task at hand. Push a button and the Porsche Active Suspension Management delivers a sportier feel. The Performance Package lowers the suspension height by 10mm and also features a vociferous sport exhaust, bigger brakes and special 19-inch turbo wheels.

Our brilliant carmine red turbo was optioned nearly to the limit, which is always a fun exercise for customers playing “Build & Price” on the Porsche website. The smart looking $7,920 Turbo Exterior Package includes 21-inch turbo design wheels, LED headlights with Dynamic Light System Plus and black accents and trim. Porsche ceramic composite brakes are an optional overkill at $8,160, but the yellow calipers and huge rotors advertise enhanced stopping power and serious intent. Along with Porsche Torque Vectoring Plus, the Turbo Interior Package adds black leather, Alcantara and beautiful carbon-fiber bits. In total, our Macan stickered at a little less than $115,000.

This Porsche is simply a blast to drive on roads with more curves than straightaways—engineers have achieved a brilliant balance of power and handling agility in a practical package with a compact footprint. For those who have always wanted a Porsche but whose lifestyle precludes a Boxster, Cayman or 911, the Macan is the ticket as the one Porsche that can do it all.