A trip to Malaysia is amply rewarded with a combination of sights, sounds, scents and, most of all, exotic tastes. These experiences are relatively unknown to American travelers—though not other nationalities. European, Asian and Australian visitors often escape cold winter months by traveling to two of Malaysia’s 878 islands, Penang and Langkawi. Some stay for months. Others stay forever.

Penang
An island of fabulous food

Penang is one of the world’s most remarkable locales. The mix of Chinese, Malay, Indian and European influences formed the one-of-a-kind Peranakan culture. Street names in the historical capital of George Town reflect the city’s colorful past and present. Monikers like Armenian Street, China Street, India Street and Acheen Street represent the main populations of Penang at the peak of its commercial importance. George Town, declared a UNESCO World Heritage Site in 2008, is in the midst of a vibrant revitalization that has seen hundreds of traditional shophouses rehabilitated from states of disrepair and transformed into coffee houses, bars, restaurants, galleries and boutiques.

Peranakan society was (and continues to be) one that dines well. One of the most impressive vestiges of an earlier era—when exotic spices of the East were more valuable than gold—is the exquisitely nuanced cuisine that emerged in the mixture of cooking styles all simmered in one pot. The uniqueness of cuisine, high quality of local ingredients and variety of dining establishments make Penang widely recognized as one of Asia’s culinary capitals. The assortment is seemingly endless, from the very popular street food to ultra-chic restaurants.

Their monetary worth may have declined since their heyday—when European powers fought wars over seeds, bark and buds—but the value of spices remains as high as ever. Nutmeg is particularly well appreciated. The brown powder found in American supermarkets has a false familiarity with this  singular plant and its many beneficial applications. The fruit is used to make a flavorful juice served everywhere in Penang. The aril (seed casing) is used to make another spice known as mace and crushed leaves are used as a salve for the treatment of wounds. Fact: the medicinal properties of nutmeg oil are so powerful that it is classified as a narcotic in several countries. 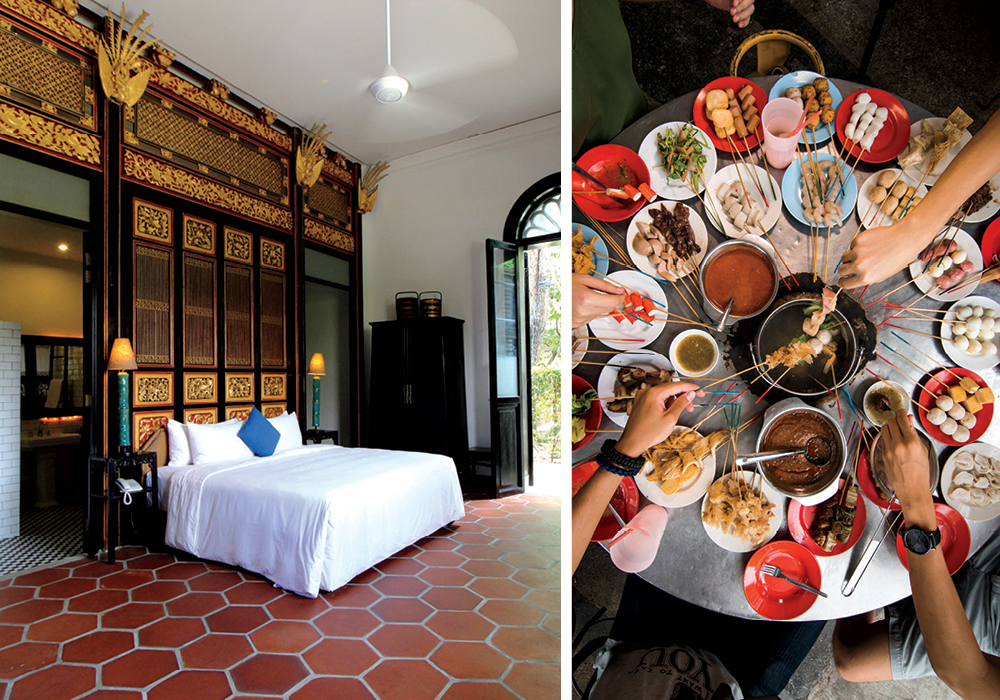 Supreme satisfaction is found around the lunch and dinner tables but there are other adventures to be had in Penang besides reveling in robust flavors. The Pinang Peranakan Mansion Museum showcases the culture at its most refined. The former home of a wealthy merchant houses furniture, light fixtures and housewares that reflect Asian and European influences. Penang’s mélange of cultures is still very much evident in a city that may see a shop selling Buddhist religious objects between an Indian tailor on one side and Anglican church across the street.

The abundance of British colonial buildings makes this one of the most important repositories of European architecture in Asia. Most of the 19th century churches are still in use today, as are the many imposing administrative buildings like the Town Hall and the City Hall next door. The Queen Victoria Jubilee clock tower is one of Penang’s most famous landmarks. It is the ornate shophouses, though, that play the main role in endowing Penang with its architectural presence.

That distinctive vernacular includes the phenomenal Seven Terraces, a small hotel with the most highly coveted accommodations in town. There are historical hotels located all over the world, but few rival Seven Terraces in authenticity. Australian investment banker turned noted hotelier Christopher Ong (a Penang native) has the twin gifts of cultural appreciation and exquisite taste, which he presents to his guests in the form of 16 extraordinarily beautiful rooms and suites. The seven adjacent terrace houses—for which the hotel is named—have been joined together to form a single property where serenity and excellence are as much at home as the guests. Seven Terraces is part of Ong’s George Town Heritage Hotels group, whose four establishments all recall the rich history of Penang. Seven Terraces’ world class Kebaya is the last word in sophisticated Penang dining. It’s a splendid atmosphere where classic nyonya cuisine is updated for the palates of the cosmopolitan traveler.

Similarly atmospheric accommodations are found at Cheong Fatt Tze Mansion, more colloquially known as the Blue Mansion. It is also the former home of a wealthy Chinese merchant and is as much a museum as one of Penang’s most evocative hotels. The building’s style is so highly regarded as a monument to the past that public tours take place three times a day to allow outside guests a glimpse of what in-house guests enjoy. The Mansion’s aptly named Indigo restaurant is considered one of the best for fine dining. Cheong Fatt Tze offers a marriage between East and West not just in the cuisine, but also the setting. The interior was designed to complement the Penang dining experience.

Malaysian biological diversity sets it as a must-visit for nature-lovers. Freedom Getaway Adventures makes it easy to navigate the kingdom Plantae. Founder Joseph Teoh is a former banker who traded an existence of suits, ties and statistics for one of aromatic simplicity. He knows every plant, leaf and flower in Penang Island National Park—a large expanse of virgin forest located in what is known as Balik Pulau. Teoh and his body of knowledge are as entertaining as they are impressive. To find out why morning glories on the sand are sure indicators of jellyfish in the sea, take a walking tour into the rainforest. The route is surprisingly cool and devoid of insects—bugs have no need to feed on humans when there is an abundant supply of other nourishment available. A new Penang attraction bringing people and nature closer together is The Habitat parkland atop Penang Hill that provides expansive views over the island, the mainland and the strait that separates the two.

Langkawi
An island of scintillating scenery 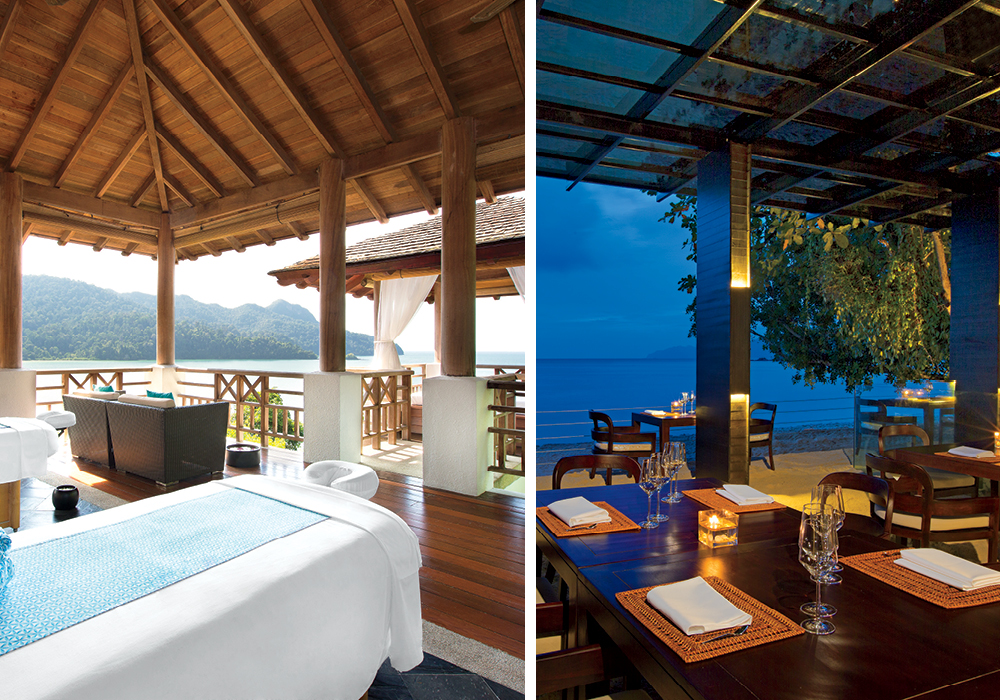 Langkawi matches Penang’s appeal as one of Asia’s most alluring travel destinations. It is an island of relaxation known for its laid-back lifestyle, lush vegetation and luxury resorts. If Penang is the busy kitchen of Malaysia, Langkawi is its quiet conservatory. Its general appreciation of nature on land and in the sea make it a preferred location for elite travelers looking to kick off their sandals and enjoy the powdery sand of the island’s beaches.

The most popular is Pantai Cenang. This is where beachfront restaurants, jet skiers, yoga enthusiasts and strolling visitors view the sunset over offshore islands dotting the bay. Casa del Mar, a private home turned hotel, occupies a privileged waterfront location within close range to the action without being too deeply immersed in it. Comfortable rooms and ultra-attentive staff see to it that guests want for nothing. The hotel can arrange private boat tours to visit small islands and rocky outcrops along Langkawi’s Southern coast—perhaps for a picnic lunch on a deserted beach where footprints are nowhere to be seen.

Many visitors to Langkawi seek total disconnect from their busy lives at home and often never leave the grounds of their resort. In that case, it pays to stay in the right place. Considered by many as one of the most beautiful beaches in the world, the sand of Datai Bay on the Northwestern coast of Langkawi is as fine as flour. This is also the location of The Andaman, among Asia’s most famous beach resorts. The only Malaysian member of The Luxury Collection, The Andaman provides a peerless vacation experience combining casual luxury and professional excellence at the highest levels. 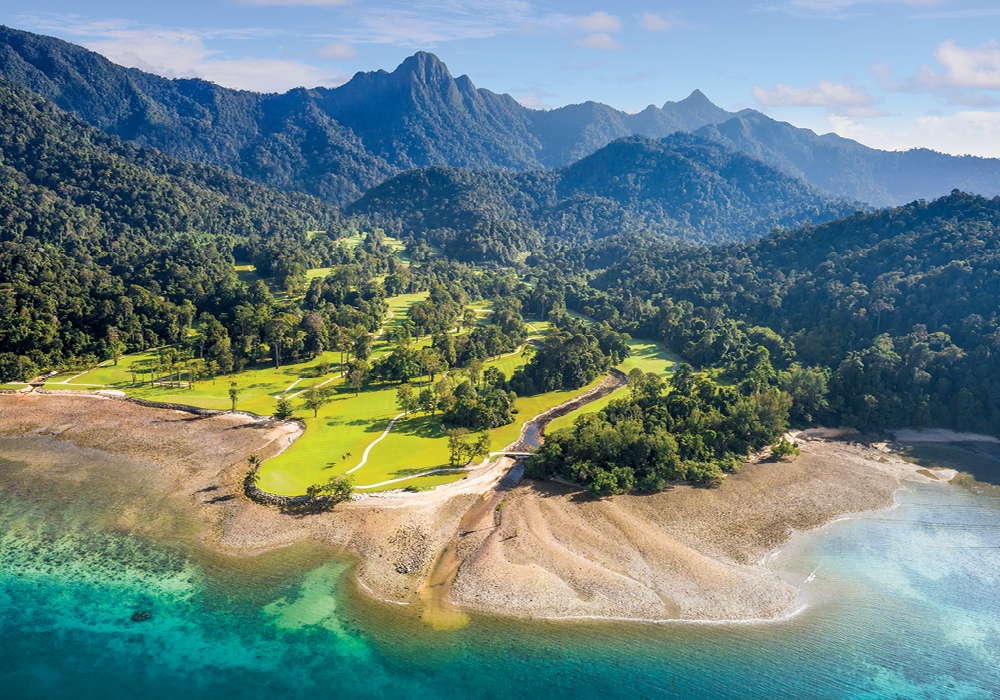 The Els Club’s three golf courses are less than a mile from The Andaman.

A private transfer from the airport in the resort’s glamorous Bentley Flying Spur is a suitable introduction to the quality of experiences that await. The Andaman’s stunning location between mountains and sea is a dramatic setting for a maximally satisfying tropical island escape. Rooms and suites are both stylish and spacious. The private pool suites have back gates for access directly to the beach. Expert guides explain the flora and fauna of the land during nature walks led for in-house guests each morning and evening. The Andaman’s marine research department also supervises a coral nursery and coral reef just off shore and informs guests about the abundant marine life in the area.

Staff at the Junglewalla Tours desk in the lobby can arrange offsite experiences from mangrove cruises to jungle walks. The three golf courses at the esteemed Els Club are less than a mile from the resort. The Andaman’s V Botanical Spa is the place to be rejuvenated after a day out. The spa’s open-air pavilions occupy the highest part of the resort and have gorgeous views of the bay. Expert therapists administer signature treatments and the resort offers a V Integrated Wellness program for guests wishing to follow a combined spa/exercise/nutritional regime.

As in Penang, food occupies an exalted position at The Andaman, where four restaurants cater to different tastes. At Jala, diners can pick fresh fish from the display case and have it prepared exactly as they want before sitting down with their feet in the sand to feast. At Tepian Laut, the wonderful flavors of Malaysian cuisine are enjoyed on a beachside deck. The hotel’s Japanese restaurant and the international buffet complete the food scene at The Andaman, where (as in the rest of Malaysia) no one goes hungry.